Crisis Point 2019 takes place on Saturday 30th and Sunday 31st March at Dungworth Green Hall in the picturesque Peak District village of Dungworth on the outskirts of Sheffield. 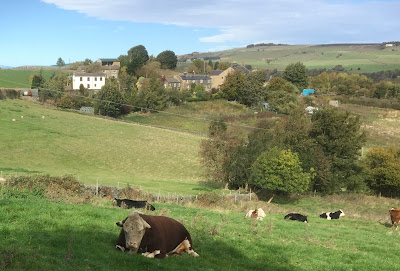 The theme this year is "War in the Mediterranean" and games of all periods and scales that fit with that general theme are welcome.  If you're interested in following our "theme within a theme" - World War Three, 1989, we'd be delighted.  See below for details.

What is Crisis Point?

The weekend usually begins about 3:30 pm on the preceding Friday when those who are staying locally tend to gather for the "load-in".  We have the hall (it's part of the local primary school) from then until Sunday afternoon and security is not a problem so we tend to do as much setting up of games in advance as we can.

There are several nice bed and breakfast establishments nearby and there are usual a handful of Crisis Pointers around to set up and to meet in the nearby pub for a drink and a chat that evening.

Saturday kicks off at about 10:00 am.  In the last couple of years we've settled on Saturday lunch being bring-your-own as this enables us to keep the games running throughout the day.  Tea and coffee are provided and home-made cakes are often make an appearance but I suggest bringing a packed lunch.

We'll play through to about 5:00 pm and then lock up for the evening.  You can bank on beer, conversation and further game-planning in the Royal that evening.

Sunday morning is again a 10:00 am kick-off (some nursing sore heads) but this time we traditionally break for lunch at the Royal before returning to conclude our games. End of play is usually about 3:00 pm to allow time for packing up and travelling back to homes across the country.

Cost for the weekend is £15.  This covers the cost of hiring the hall.  Any excess we make goes to charity.  In the past we've donated to national and local charities including Combat Stress and the Royal British Legion.

What makes Crisis Point unique is that it has no fixed subject.  While keeping its structure and its ethos of building a friendly gaming community, it's been free to vary considerably from year to year.  We've changed our focus to follow the interests of the attendees and, to be frank, to ensure the continued engagement of the organisers' enthusiasm.

Crisis Point first happened in April 2012 when a group of like-minded wargamers gathered to play an  unfeasibly large game of Cold War Commander using 6mm scale models.  The name of the event reflected the crucial point in our chosen battle, stolen as it was from Sir John Howard's book The Third World War.   In our case, pseudo-history was reversed and the Warsaw Pact made a crucial breakthrough near the Dutch-German border. 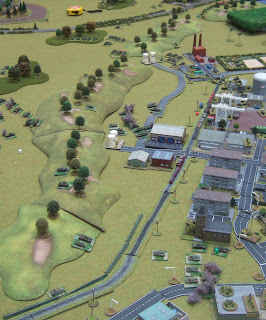 Crisis Point remained a 6mm, CWC event using Hackett's timeline for the first two years but then switched scales, rules and setting.  Over the next three years we explored the events of the Andreivian Civil War in the 1990s.  We did so in 20mm scale mostly using the Arc of Fire rules which have become very popular with the group for large skirmish games. 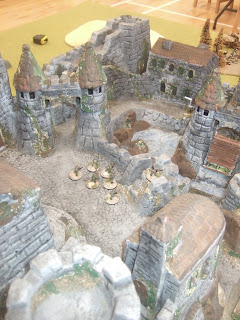 Andreivia is a fictional country on the eastern shore of the Black Sea and after three years fighting the 1990s civil war we went back in time (with the same rules and scale) to see how Andreivia survived 1918 and the transition from the Great War to the Russian Civil War. 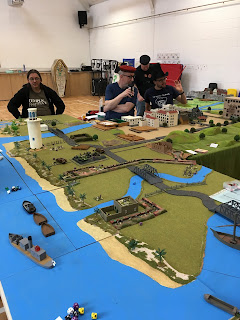 And so up to date.  In 2019, Crisis Point will see another change of focus and an experimental move to a much more open approach.  Attendees are free to bring any game within the general theme of War in the Mediterranean, which I take to mean the whole Mediterranean basin - if olives grow there it's probably OK!

For a bit of extra detail, we held a pre-Crisis Point game of Sixth Fleet which established a number of background events for a more precisely defined background.  You can find the details here.

So far the games we know about are:

If you're looking for accommodation in the village I can recommend:

If you'd like to know more about Crisis Point, please email organiser Richard Crawley at crawleystorrs@gmail.com or telephone (+44)(0)114 232 2533.

Looking forward to it already and already planning my forces and some scenery!

Always a fantastic weekend! One of the highlights of the gaming year. Great location, great games, excellent beer, top pies and good friends.

Cakes in the oven ready for the weekend.