Inspired by two Swedish wargamers, Per Broden and Michael Leck, I decided to have a go at the Thirty Years War in 6mm scale using Dan Mersey and Michael's The Pikeman's Lament rules.

My eventual plan is to do the Death of Gustavus Adolphus scenario from Michael's blog but for now here's a few pics of the first game with the new collection. 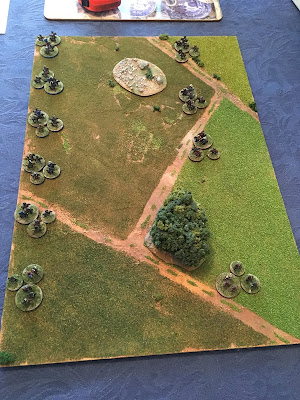 The idea is to create a game that's small enough to take to the pub. This board is 30cm x 45cm and works OK for 24 point armies.  It isn't big enough, though, for the Gustav Adolphus forces, which are about 50 points a side.  I shall have a go at building a second board the same size to go alongside this one. 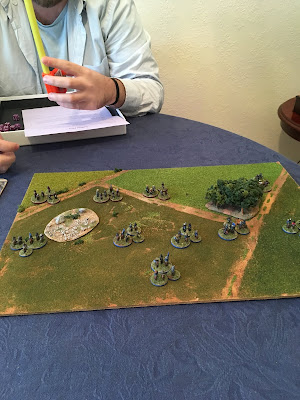 Jamie and I played on the dining room table at his Grannie's house in Meols and we managed to get through about a dozen player turns despite this being our first try with the rules. 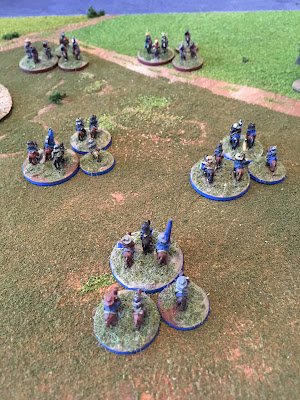 The units, all cavalry at this stage, are based using the 1-2-3 system using 1 Euro Cent, 1 UK penny, and 2 UK pence coins.  Given the small size of the figures (Baccus 6mm) I've added extra distinction to units by painting the rims of the coins in dark red for the Catholics and royal blue for the Swedes.

More pictures to follow as the forces and terrain pieces progress.

Posted by Counterpane at 1:43 PM

Really interesting to see. I have been thinking about the rules with smaller figures too. You have inspired me to continue,thanks.