The second of my games over Christmas this year was An Incident at Fearnley Whittingstall.

Richard Phillips has an excellent write up of the game over at his blog.

The renowned British scientist Barnes Mitchell-Whittle was spending the night in the village of that name in advance of a secret weapon test the following day.

A German glider-borne assault aimed to capture Mitchell-Whittle.  He was to be extracted by sea, elements of the Brandenburg Regiment having captured the beach and cleared it of mines. 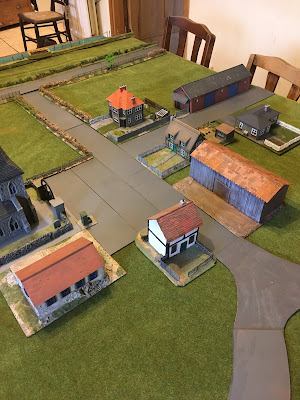 I have two favourite sets of WW2 skirmish rules, Arc of Fire from Tac Publications, and Chain of Command from Too Fat Lardies.  CoC is great where each layer has a platoon to command but this game saw players commanding quite variously sized units and I thought AoF was the way to go.

Richard P commanded the Home Guard forces - a standing patrol in clifftop positions, and the platoon's ready reserve at the church hall.  Sam had the two scientists and the section of Grenadier Guards assigned to protect them.

Rob and Andy took charge of the Germans.  Rob was told he had three gliders with assault squads ordered to capture the scientists.  Any had two squads that included some pioneers tasked with clearing and holding the route to the Beach.

Andy also had responsibility for the Brandenburgers and Kriegsmarine forces who would capture the beach and extract the German force.

We did the glider landings by means of the old method of throwing paper aeroplanes at the table and then substituting them with my resin DFS230 models.  This went fine except that Andy's first glider landed right on top of the Home Guard position on the cliffs so the alarm was given somewhat early in the proceedings! 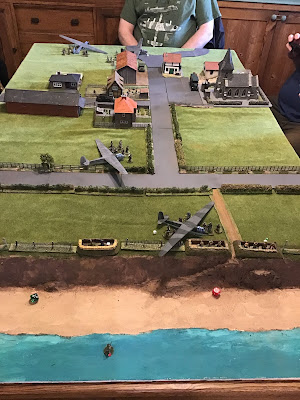 I'm afraid I was a little cruel to Rob.  When he'd planned to use all three assault squads, I informed him that one of them had failed to arrive. This may or may not have had anything to do with the number of glider models I have!

The action at the clifftop turned into a fierce close-range firefight.  The Fallschirmjaeger were thrown back to the hedge lining the clifftop road. 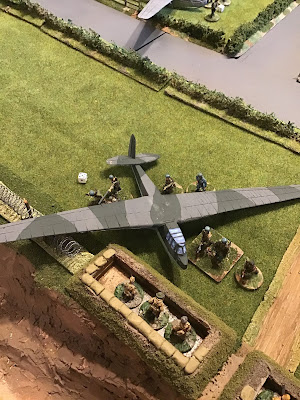 Meanwhile, the troops from Andy's second glider moved out to secure the road between the village centre and the cliffs. 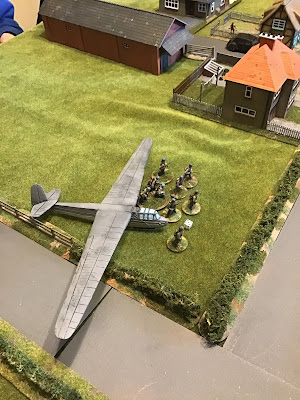 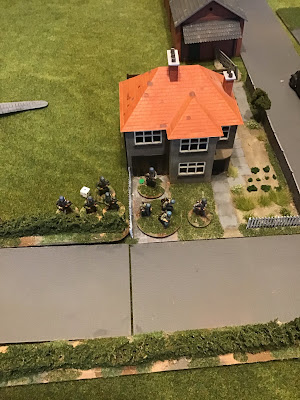 Rob got his two gliders down in a nice tight landing zone and moved out towards the north side of Fearnley Whittingstall. 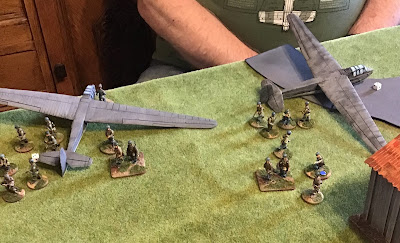 One of the German squads moved out to surround the village pub... 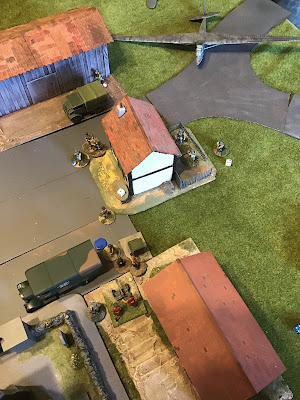 This proved to be a good move as the scientist (accompanied by Dr VR Smith of British Scientific Intelligence) had sneaked out of Rose Cottage (where the Grenadier Guards thought he was spending the evening).

The action in the village turned into a firefight between the Jaegers around the pub and the Home Guard at the Village Hall.

During the fighting in the village, the German naval force arrived at the beach in their Landwasserschlepper. 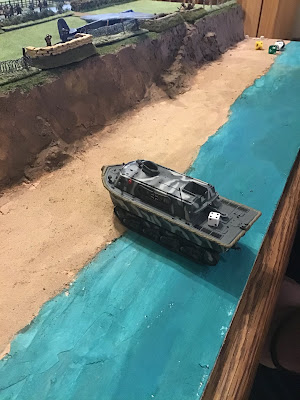 The Brandenburger mine clearing team discovered that the minefield was dummy. 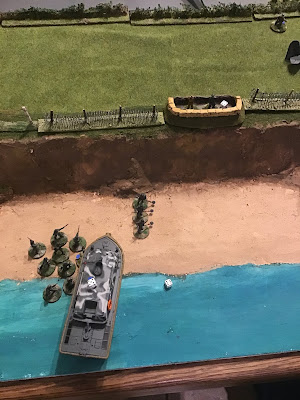 And by the time the Brandenburger reached the path up from the beach their Fallschirmjaeger colleagues had driven off the Home Guard. 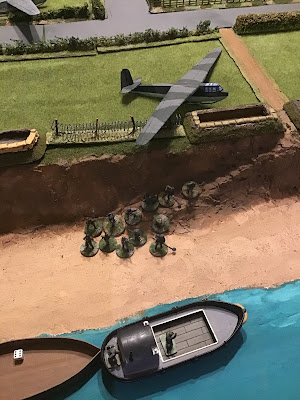 In the end the Germans had secured the route between the village and the beach but they were unable to drive off the Home Guard and the remains of the Grenadiers around the Village Hall.  When we reached the end of the available time I decided to call it a narrow British victory. 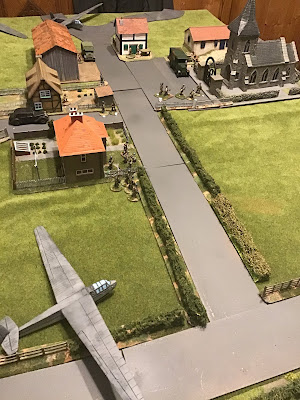 Posted by Counterpane at 5:06 AM

That's a lovely set-up. I like the idea of deploying gliders using paper aeroplanes.

Thanks AJ. I think the paper plane idea may have come from a Donald Featherstone book.

Cheers Richard. Thanks for your write-up.

I love all 20mm pulp, and this is so very awesomely pulpish!

Today I found Your blog and immediately added to observed. Good job!