My Top Ten (an update)

Having played wargames more often under lock-down than I ever did before, I thought it might interesting to revisit a list of most-played games I first compiled back in 2010.

There are a few changes since then. Let's have a look at the top ten in, as tradition requires, reverse order.

At number ten it's Song of Blades and Heroes: 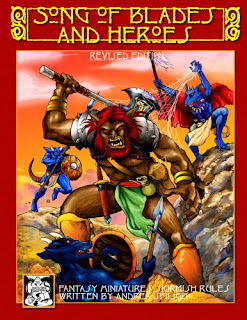 That's the cover of the revised edition but I'm still using the original. This set of fantasy skirmish rules is great fun. I've used them for Gloranthan skirmishes - I still plan to complete the Pavis campaign - and also for a number of participation games at the local primary school's summer and winter fairs.  Even younger kids (eight or nine years old) seem to pick up the basic rules pretty quickly.  Games played = 9
In at number 9 is Pulp Alley: 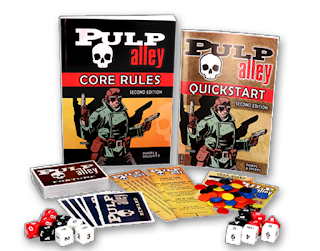 Like Song of Blades and Heroes, Pulp Alley is a game I'd recommend to anyone wanting to give miniatures gaming a try for the first time. The number of figures you need is small. A player's force is a called a League. My Cybermen League has only three figures! A more typical League will be four to six figures. The system's damned flexible - I've used these rules in games inspired by Buffy the Vampire Slayer, and Doctor Who as well as the default setting of 1930s adventure serials.  Games played = 12
At number 8 on the chart is To The Strongest! 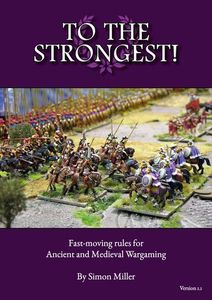 Simon Miller's fast play ancient rules use a square grid that speeds up play considerably. I've used the rules with 6mm and 28mm forces covering the Punic Wars, the later Roman Empire, and the Wars of the Roses.  I think 6mm is my preferred scale.  If the English Civil War is your bag, there's an ECW version called For King and Parliament. Games played = 13
Still on the chart at number 7 is TacWW2: 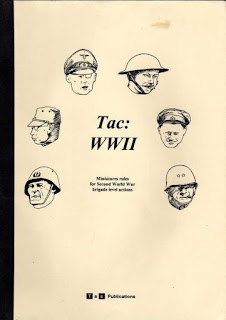 This is clearly the most old-school set of rules in terms of presentation but don't let that fool you. There are some really interesting mechanisms in this set of Second World War rules by Chris Pringle and Nick Mitchell. One vehicle (or base of 6mm figures) represents a platoon. The sweet spot for the game probably has a brigade on each side. Players will write brief orders for each battalion. Each of the companies making up a battalion will have a Mode that determines their tactical stance. This means you can envisage what the individual platoons are doing without getting bogged down in detail. Games played = 14
New at number 6 on the all-time chart is Lion Rampant: 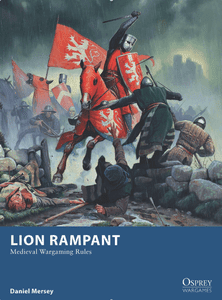 Our Swiss-Burgundian War games-by-Skype have pushed this set up the charts in recent months. It's another set that needs a not-too-onerous number of figures. My original 15th century Swiss force consisted of 48 figures. The rules are frankly a bit simplistic; some period purists may say too much so, but they've generally been fun to play. A great set to pull out for a game at short notice.  Games played = 15
Into the top five now with Chain of Command: 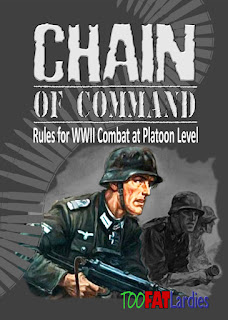 The first (and not the last) game from Too Fat Lardies in my Top Ten. Chain of Command is a challenging game that puts the player firmly in the boots of a WW2 platoon commander. As with all Lardies games, friction is a significant factor on the battlefield. Again this is a set of rules where building an individual force is fairly manageable. No bad thing as I now have about a dozen platoons! Games played = 18
At number four in the countdown we have Cold War Commander: 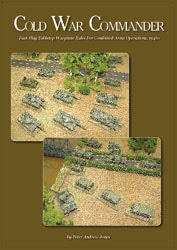 As I've said before, this is the set of rules that got my 1/300th scale 1980s models out of storage and onto the battlefield. It has a special place in my heart because its also the set of rules that led to the creation of Crisis Point. Adapting the Warmaster fantasy rules to modern armoured warfare seems a bit of a leap. I'm not entirely comfortable with the core combat mechanism - cumulative hits over the course of a turn will either wipe out a platoon or they'll cease to have any effect. Not really sure how to rationalise that but Cold War Commander is fun to play nonetheless.  Games played = 20
Third place goes to Sharp Practice: 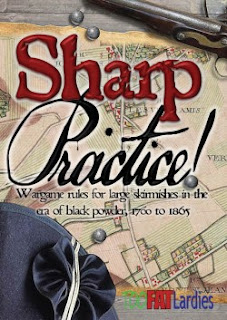 I very nearly gave up on Sharp Practice on the strength of the first edition. It had a number of difficult-to-memorise mechanics and an almost supernatural ability to screw up even the best-designed scenario. Second edition, however, is a much more polished exercise. I've now used these rules to play large skirmishes from the War of the Spanish Succession to the Second French Intervention in Mexico by way of the American Revolution and the Napoleonic Wars.  Games played = 22
Second in the chart, and the most played of the rules I'm still regularly using, is Arc of Fire: 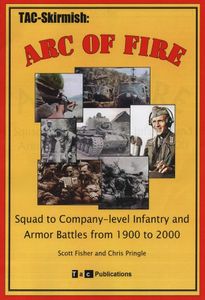 This is co-author Chris Pringle's second appearance in the chart. It's also the second appearance by a set of twentieth century skirmish rules. Despite Chain of Command doing a fantastic job, Arc of Fire retains its place in my armoury. For one thing AoF covers a wider range of dates - we've used it for everything from the Boxer Rebellion to 1990s Andreivia - but it also has more flexibility in the set up than CoC. Arc of Fire shines when players are handling asymmetrical forces often from multiple factions. Trouble in Vani with its half a dozen different factions is a great memory.  Games played = 41
But still, Bryan Adams-like, at Number One is Hordes of the Things: 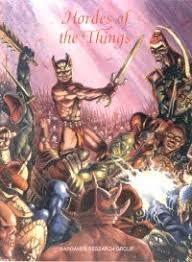 I haven't played HOTT since the 2015 demise of the Berkeley tournament (which was held in Slimbridge but we won't go into that now). I think I rather over did it over the preceding fifteen years or so. Nevertheless it remains a splendidly well-balanced set of rules and adaptable to a wide range of settings. I'm sure I'll dust off the Glorantha HOTT armies one day.  Games played = somewhere north of 150!
So there we have it. Realistically I don't think I'm ever going to see HOTT moved from the top of the charts!

Posted by Counterpane at 8:21 AM

Great Top 10! Have to say thanks to you introducing me to Arc of Fire it will always be in my Top 3. Trouble in Vani still my favourite wargaming experience.
Cheers, Richard P

Thanks Richard. Yeah, Vani was fun!

Yeah, it's a case of horses for courses with Tac. It was the small Winter War you ran at Middlewood Hall that first turned me on to it.