After making contact on the Hordes of the Things Facebook group, Diego Correa and I played a couple of, rather quick, games of Hordes yesterday. We played by Skype; me in Yorkshire and Diego in Santiago, Chile!

Diego's fairly new to the game and although his English is very good, he's struggling a bit with the very precise Barkerese language in which the rules are written. I volunteered to run him through a game. There's no substitute for actual game-time when learning a system.

I thought 28mm was the best scale to use given the limitations of an iPad camera and less-than-stellar lighting. That meant using my Gloranthan armies. Diego chose the Sun Dome Templars (4x Sp inc Gen, 1x Pd, 4x Hd, 1x Sh, 1x He, 1x Rd). 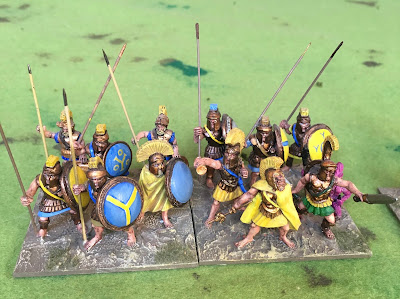 My preferred Gloranthan force is the Wolf Pirates (2x He inc Gen, 1x Pd, 6x Wb) but I decided to make things interesting by wheeling out the Morokanth (5x Wb inc Gen, 3x Mg, 2x Lk).
We played two games and at no time in either game did any of Diego's forces enter the Bad Going. So my Lurkers were wasted? Well, not really, avoiding the Bad Going channelled his army into a narrow space so he wasn't able to outflank me with a Hero/Paladin/Rider strike force.
However, in the first game he didn't need to. The Champion of Garhound (Hero), Vega Goldbreath (Paladin) and the Zebra riders managed to get into close combat with my three elements of Morokanth shaman (Magicians). Diego rolled, I think, three sixes for the combats and I rolled a one, a two, and another one! Three dead Magicians; game over!
Having finished the first game so quickly, we decided to go again starting from the same initial positions. This time there wasn't the early PIP drought that had prevented me getting into any kind of good position in the first game.
Diego had moved his strike force in the beginnings of a flanking move on my left. He would have to go through Bad Going, though, so he would be slowed down from reaching my Magicians. I decided that this game me a chance to take on his Spears with a marginally better-than-even chance if I got in first. 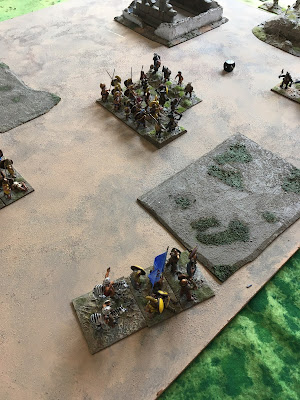 The Morokanth warbands charged forward and managed to hit Solanthos Ironpike and his fellow leaders in the flank while the Morokanth khan's warriors attacked from the front... 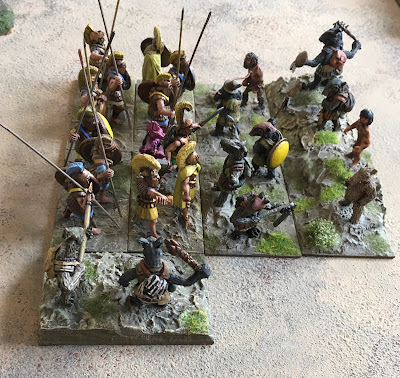 It was only an even chance (+5 versus +5) but if I won Solanthos was dead and the game was over unless Diego could kill my remaining two Warband with a 6:1.
I think there was a point in it in my favour in the end and Solanthos was sent to meet Yelmalio. General dead and more points lost than the opposition: game over!
So two games played in a couple of hours with time for chatting, eating cheesecake (Diego) drinking wine (me), and a little tactical discussion.  I very much enjoyed meeting Diego and playing my first Hordes in five years (apart from a quick solo session of can-I-remember-these-rules? on Friday evening).  We agreed that we'll definitely do it again sometime.

Posted by Counterpane at 2:36 AM

What a great way to learn the game! Fantastic.

And good to see you back on the Hordes again ;)

It was complete joy to to have on my firsts HotT battles againts you dude. I learned a lot in a really short spare of time. Hope that it also was helpfull to you to catching again the hype of this classic and dynamic system.

It was also amazing to be able to express myself in my exotic "chileanglish" with a tolerant native speaker. Hope to improve myself for the next game.

The battle has setting, lore explanation, armies fully painted and fancy based, pluss a thematic desertic terrain. That is why I can't not love wargaming.

And of course, new bloodshed over the sand is expected in the future.... >:)

It was a joy to have one of my firsts HotT battles againts you dude. Hope that the experience also helped you to catch again some hype for this classical but inmmortal wargame system.
I need to thank the tolerance with my exotic chileanglish. It motivates me to improve before the next game.

Whay else can I say? A really colol Saturday. Fully painted armies, masterly crafted thematic terrain, deep lore and setting explanation before even rolling a dice.

This is why I just can't stop loving wargaming.

And of course, I expect more bloodshed over the sand in the future >:)

Thanks for the encouragement Alan!

I really enjoyed it thanks Diego. Yes we should definitely do it again.

I, too, learn a game the most easily when a seasoned player can run me through a "hands-on" demonstration. Fortunately my buddy up the street is superb at this. Well done.

And by the way, the figures are glorious--I thought at first they were either 40mm or 54mm!

Thanks for your comment Chris. I think your description of my painting is over-generous but very welcome none-the-less.

I was very mush inspired by Gregory Privat whose general stylistic approach I following in the choosing the colour scheme of the Sun Domers.