We had another game of Lion Rampant by Skype again today. We played a four player adaptation of the scenario The Messenger from the Lion Rampant rule book.

On this occasion Mark's Burgundians were escorting a messenger down a road to Dickerhausen (i.e. from bottom left to top right on the map below).  Gus would command another party riding out from the Burgundian camp at Dickerhausen (top right) to escort in the messenger. 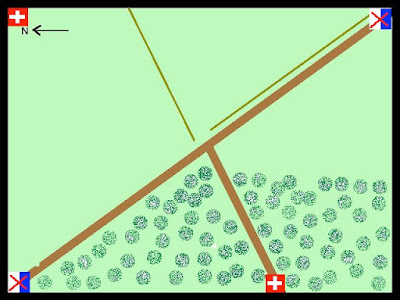 Andy would command the Swiss pikes, halberdiers, and mounted crossbowmen from the top left, while John would enter on the road through the forest with a force made up entirely of Bidowers (a mix of Swiss skirmish troops and Irish kern mercenaries). 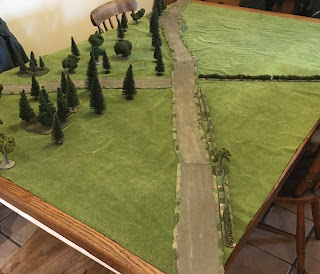 Action was slow getting started thanks to some shockingly poor dice rolling by both sides. If I recall correctly, only a unit of Burgundian skirmishers from the camp were on the table at the end of the first pair of player turns!

Gus (as Albert Saysions de Dôge) split the Dickerhausen Burgundians in three.  The skirmishers headed for the forest while the pikemen marched down the road and the Men At Arms crossed the hedge into the enclosure.  This was designed to put them in a position to intervene at the road junction without being lured into the forest.  It was a good plan but it was to be hampered by Gus's ability to repeated roll four on 2d6! 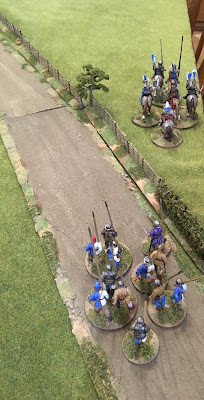 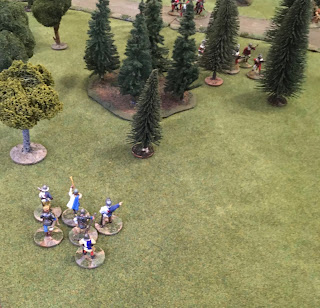 John's (Beat Züsli's) skirmishers advanced through the forest along and alongside the road.

Mark (Heinrich von Schimmel) decided that the coustilliers should escort the messenger, that his personal men-at-arms should follow them and that their left flank should be guarded by the Italian mercenary crossbow-men. 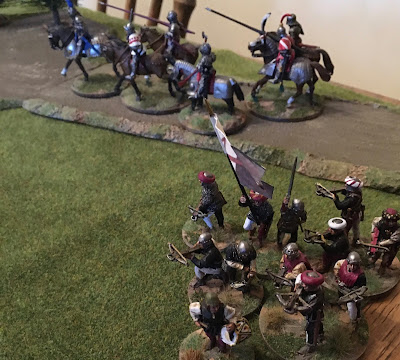 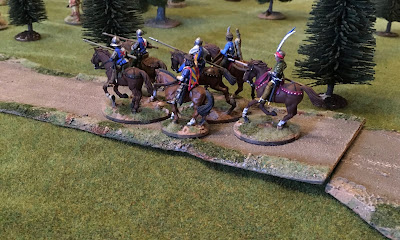 Andy (Gustav Sneffl) led the Swiss force advancing across the open ground. He had a unit of mounted crossbow-men, two units of pikemen, and one of halberdiers. 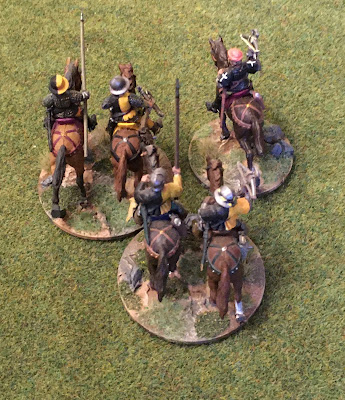 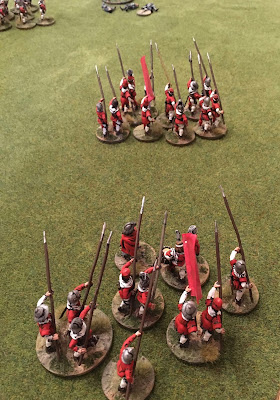 The Burgundian coustilliers advanced quickly along the road and it looked at one point like they would outpace Sneffl's pursuing troops and march straight into the arms of Saysion de Doge's men.

Unfortunately for the Burgundians however, their ability to fail to activate at key moments would see the horsemen stop when they reached the road junction. Presumably they were uncertain as to the route. The only slight ray of sunshine was the fact that the Irishmen in the forest, within easy javelin cast, were equally confused.  Were these enemies or not? 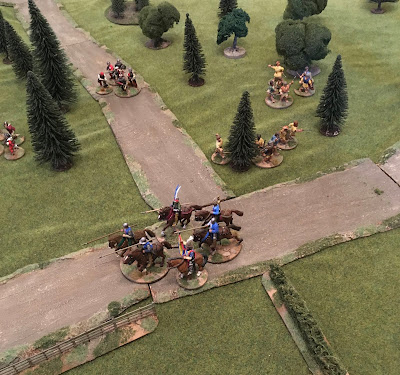 By the time the coustilliers had got their act together, Sneffl's halberdiers were within charge range.  They charged in and the coustilliers, surprised it seems, were caught at the halt. 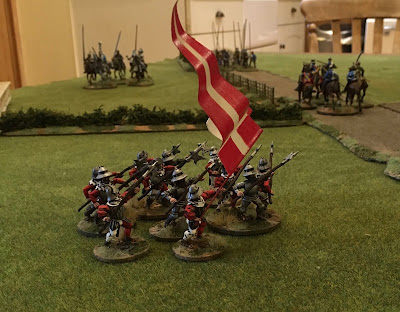 The halberdiers charged. Their vicious weapons did bloody work among the enemy horsemen.

The survivors fled. The halberdiers charged again. Once more the coustilliers were too disorganised to counter-charge and now the escort was reduced to a single figure... who was then killed by a handgun ball fired from the forest. 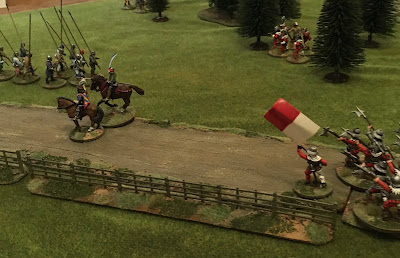 The messenger was left unguarded... 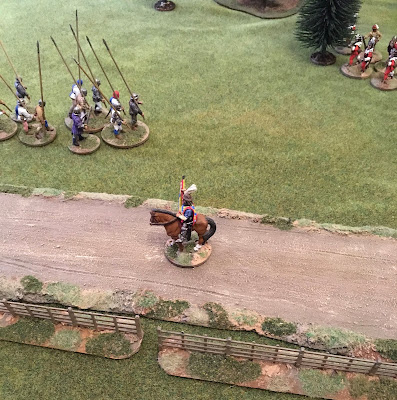 Under the terms of the scenario, the game therefore ends in a Swiss victory.

Towards the end of the game, Gus rolled four consecutive fours on 2d6 to (fail to) activate his troops.  He managed to get his pikemen off the road to allow the coustilliers a clear path to the camp and he lost not a single figure all game but in the end he was unable to influence the result.

Mark lost the messenger and so both Burgundian commanders came out of the action with no Glory points (neither had made a Boast).

Andy had Boasted that he would "Strike the first blow" but failed to get into position to declare a charge and so ended up, again, with four points of Glory. John's Irish lost no casualties and fired the fatal shot that took out the last of the escort.  He finished with five points of Glory.

At the end of the third* game we see the "league table" looking like this:

* Effectively the second game as I'm regarding the first as a test (and anyway leader casualties mean that none of the commanders in that game continued into the second).
Posted by Counterpane at 9:59 AM