Pavis in the Spring

You'll have noticed (or more likely not noticed) that May's Saturday Afternoon Wargame hasn't been reported here.  All in all it was a bit of a disaster.

I announced the subject early and I'd no sooner suggested Shot Steel and Stone that I had nine or ten volunteers and had to start turning late-comers away.  I planned the biggest game I could manage to fit everyone in.  I know the rules are suitable for big games because Ayton.  I was also pretty sure I had a handle on them having played a previous solo game.

Then things started to go awry.  A couple of players had to call off and a couple more clearly forgot, perhaps because I'd called the game so early, and didn't turn up on the day.  Then the rules turned out to not say what I thought they said and we go total confused over how the sequence of play was meant to work.  I took a prompt decision to abandon play pending another review of the rules and more test games.

The early abandonment of the planned game meant that I could grab something off the shelf and arrange a very hasty game for the four players we did have.  That something was Song of Blades and Heroes - a game that's easy to pick up and that I can run blindfolded.

The scenario, such as it was, was a four-way fight in the Big Rubble.  Richard P played a small force of Lunar peltasts led by a female Hero, Harry had a handful of Broo, young gamer Sam had a group of Sun Dome militia led, somewhat incongruously by a Vingan warrior-woman, and I pitched in with a small force of Scorpionmen.

None of the forces were properly pointed up and I've no idea whether they were "properly balanced" but we had fun nevertheless.  the photos aren't great because I was too busy running the rules but here they are... 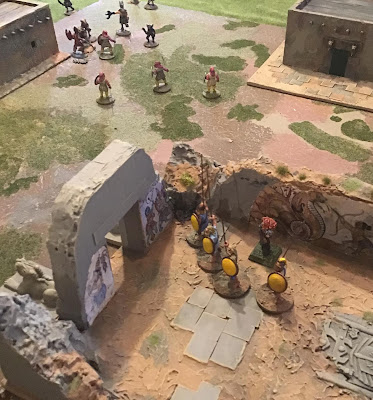 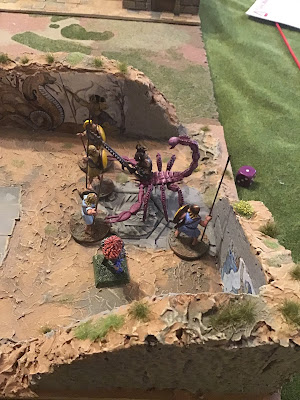 I'm using my To The Strongest disorder markers to mark units that lose a combat on an even roll.  I've decided I don't like lying figures down.

What did come from the experience was a reminder of how much fun SOBH is and a determination to get my Pavis project back under way.

In the past week I've revisited the collection of old fantasy figures to see what might make for interesting Pavis characters.

The three women on the left are figures Stella painted.  That must have been twenty five years ago or more.  I've touched up the paintwork to fix decades of minor damage and based them in my usual skirmish-game style.  A little static grass will eventually appear.

The two guys on the right are ones I've painted recently.  Both a smallish 25mm figures and probably about 30 years old. They will both do nicely as members of the Cult of Pavis or similar. 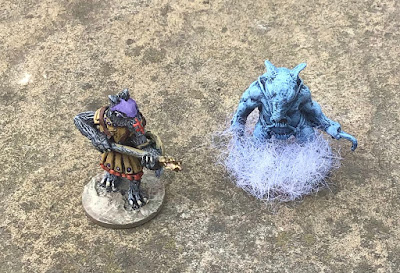 I have Morokanth for both SOBH and Hordes of the Things and I pride myself on not having two identical figures in either force.  This is a challenge because there ain't that many Morokanth models out there!

The one on the left is a simple conversion of a model from Tabletop Miniatures.  I've added a shield from a Foundry Plains Indian figure and converted his spear into a mace.  This is the fourth or fifth different model I've produced from this same basic casting. 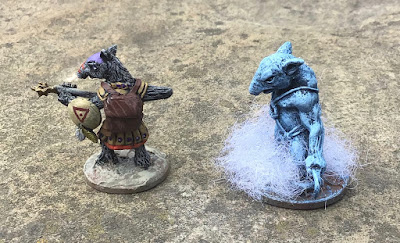 the other figure is from Mad Knight Miniatures.  He's a much better representation of Morokanth as depicted in Glorantha artwork but clearly not compatible with my existing models.  At £5 a shot there was no way I was going to replace the whole force with Mad Knight castings!

I decided that I could justify the difference in appearance by painting him as a Morokanth spirit. I think this works visually.

I'm rating the Morokanth as Quality 3+, Combat 4, Savage.  Morokanth are strong and likely to rip your guts out with their sharp, powerful claws which I think justifies the greater chance of a Gruesome Kill as a result of the Savage special rule.

The Spirit will probably be Quality 3+, Combat 1, Free Disengage, Tough.  Not particularly lethal in combat but it'll be hard to get rid of!

Posted by Counterpane at 2:30 AM

Wasn't a disaster at all. The SoBH game was great and well worth the trip. Looking forward to more visits to The Big Rubble in the future.
Cheers, Richard P

You're too kind Richard.