When I bought To The Strongest!, my old mate Simon Miller very kindly sent me a pack of his laser cut counters as he knew that I'd be playing in 6mm scale and the counters would be much more manageable than the default approach of using a deck of playing cards.

If you're going to play TTS! I strongly recommend that you buy a set of Simon's counters.  They look like this: 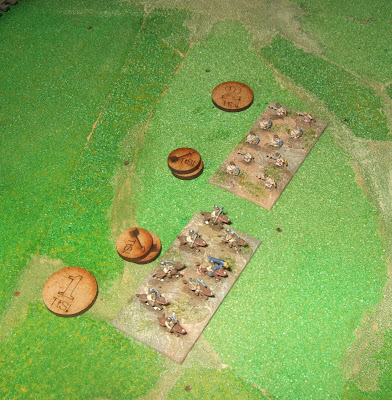 I'm always keen that the look of a game should be compromised as little as possible by the presence of markers on the table.  The larger discs, activation markers, are all removed at a particular point in the game sequence so photos can be taken when the table is relatively clear.  They are a little large for my scale but I can live with that as you're always balancing intrusiveness with ease of handling.

The smaller, ammunition status, markers on the other hand are more problematic for me.  Most units in my Late Roman and Gothic armies are accompanied by up to three of these throughout the game and I find the stacks of counters a pain to move and to fit into what can often be crowded squares on the table.

Last night I had an idea and this morning I finished some prototypes of an alternative marker style.  These markers are designed to unobtrusively show any numerical status from one to three.  You can use more than one if you need higher numbers. 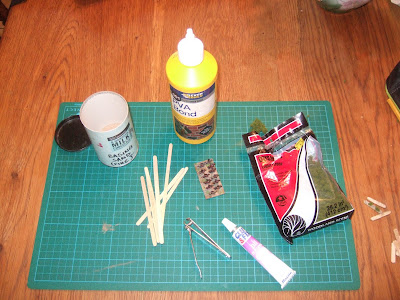 ... some wooden coffee stirrers, some fine sand, and some clump foliage.  You'll also want PVA and clear glue and a set of toenail clippers.  Oh and some sandpaper.

If you're making more than one of anything always make a jig.  In this case the 'jig' was a unit of cavalry, against whose base side I measured off lengths of coffee stirrer.  I decided to make the markers just over 30mm long. 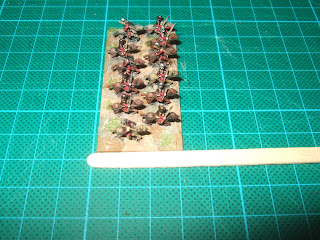 Having marked the length with a pencil, a couple of cuts with the toenail clippers gives you a roughly rounded end which can be tidied up with a couple of passes on some medium grade sandpaper to match the original radius end of the stirrer. 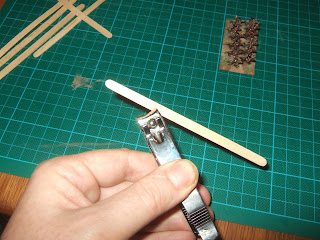 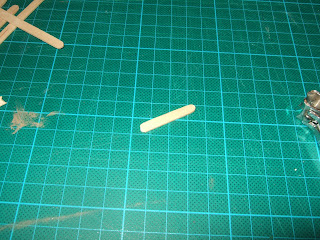 Next, smear your pieces of coffee stirrer with PVA... 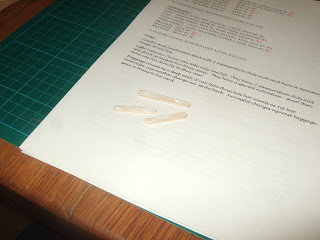 ... note that we're now working on a sheet of paper for reasons that will soon become obvious. In fact they become obvious now as we pour sand onto the wet PVA: 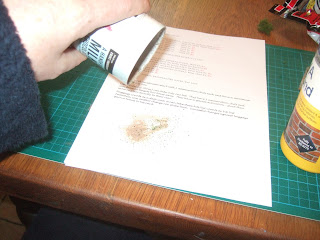 When the sand has dried you get these: 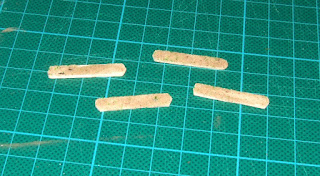 Which you then paint (I always use at least two shades of brown when basing figures and did so again here)... 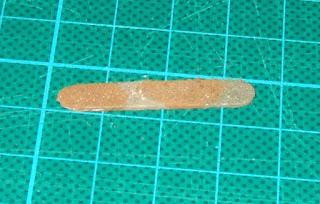 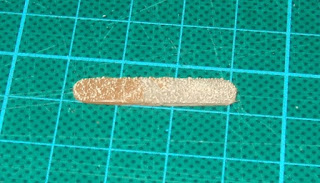 ... and, using the clear adhesive, stick on one to three pieces of clump foliage: 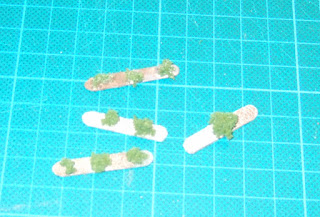 The resulting markers should be reasonably easy to handle and will quickly communicate the ammo status of the units they are placed behind.  Like this... 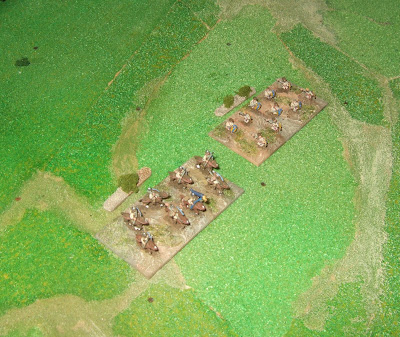 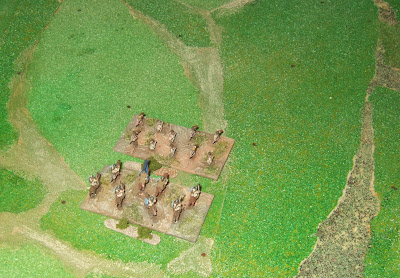 As you can see, even with two units in a square, the new markers fit neatly.  With Longbow or Artillery units that get six ammo I'll simply use two strips.  I may make some slightly shorter ones for the purpose.

A neat idea - not unlike my use of small rocks for casualty markers, but more sophisticated and easier to move as you have multiples on one base.

Another two advantages of them is that they are scale and period independent, so can be used for other games as well. Maurice disorder marker, for instance.

I have some other markers made from rocks glued to textured pennies. I've painted numbers on the rocks and use them to track hits in Impetus. They are fine for my 28mm WOTR collection but I ma try using this approach when playing Impetus with the wee Romans.

Great idea Richard, simple and effective. I shall definitely be doing something similar.
Cheers
Richard P