Jamie's Christmas present to me, the card game Love Letter finally got played this evening. 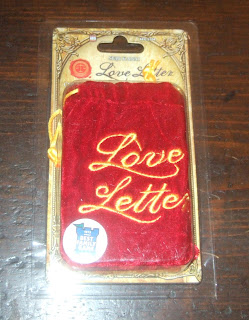 A group of us went out for a swift pint after work (well most of them for a pint and a meal but I had to get back for Millie's excellent sweet and sour chicken) and Gareth, Karen and I played a game in about twenty minutes in the Banker's Draft.

It's a fun game in which the aim is to be the last player still in the round and thereby get your love letter to the sequestered princess in the hope of winning her affections.  It looks like it'll handle two to four players. For the record, Karen won; it was all luck I tell you!

In other news our game was somewhat disturbed by a sudden outbreak of violence on a nearby table in which one of the punters got glassed! Staff were summoned and an ambulance and subsequently the local constabulary attended. But I suppose that's what you should expect when frequenting a city centre Weatherspoons.
Posted by Counterpane at 11:53 AM

Love Letter is a favourite game of ours at the moment; portable and quick to play. And, yes, it's for 2-4 players only, but the Deluxe version (which has new and extra cards) handles up to 8.

Cheers, Alan. I'll keep an eye open for that.