Not really holiday gaming this because I've been back at work a couple of days but on Friday evening Russ Phillips came over for an introduction to Arc of Fire.

I laid on a simple scenario in which Russ, commanding a small platoon of well-motivated and reasonably trained Mujahideen had to sweep the edge of an Andreivian forest for an SAS forward observer team hiding in the undergrowth.

To demonstrate some of the less frequently used elements of the rules I gave the SAS a half-battery of three 105mm guns in direct support (i.e. treated as if they were at platoon-to-battalion level in the AoF rules).  In addition the SAS had extended spotting and were spotted at half normal range due to expert camouflage.

I didn't take many pictures because I was busy explaining the rules to Russ.  He had to move out of his village base (below) ... 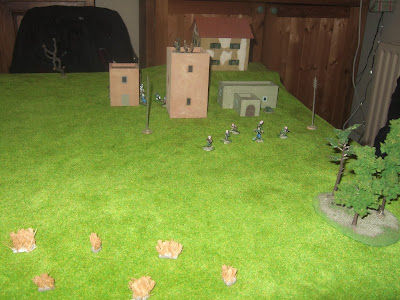 ... and sweep the woods (bottom left in the picture below) where, unbeknownst to Russ, two two-man SAS teams were hidden. 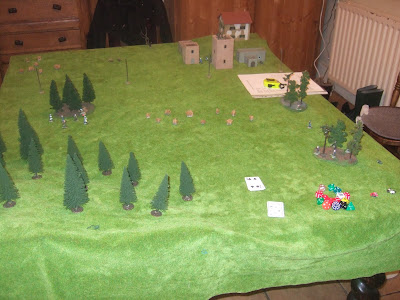 The game was fun and the craic was a great antidote to the return-to-work blues.  I love the way the combination of card-driven sequence of play, passed or failed TAC rolls and random events tell an emerging story in AoF. 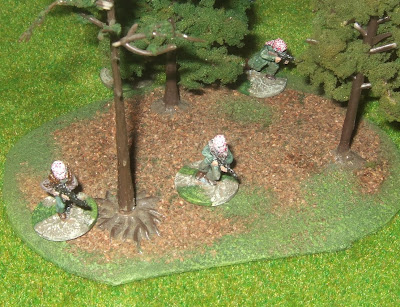 The Mujahideen were of high morale and pushed on despite taking casualties from artillery and, eventually, small arms fire.

Although realistically the SAS would have bugged out before the Mujahideen got too close (I'd carefully positioned them to make this possible) I decided to leave them in place so we could try out close range fire and even close combat.

Outnumbered 2:1 the SAS protection team was wiped out and we left the game with the Forward Observers bugging out to safety. 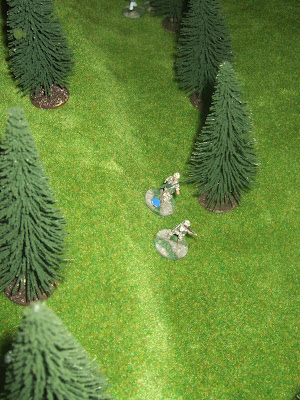 Russ really enjoyed the game and I think we both came out of it with enthusiasm renewed. Russ is now down as a definite for Crisis Point III where he'll be joining Jamie as part of the Russian force.

Posted by Counterpane at 1:58 AM

It was a lot of fun, and I am now very keen for Crisis Point III :)

Thanks again for hosting the game.