Our second game this Christmas period used a new set of rules (to me) and the only one in my collection that was originally published in Breton!  Rather appropriately our first game of Argad was set in the part of Gaul that is now Brittany.

Armorica in the fourth century CE was notionally part of the Roman Empire but was de facto an independent state controlled by the bacaudae.  Historians seem to differ as to whether the bacaudae were bandits, proto-proletarian revolutionaries or simply bourgeois Roman citizens keen to avoid paying rent to absentee Roman landlords.  In this game my interpretation tended towards the last.

Our table was set up thus: 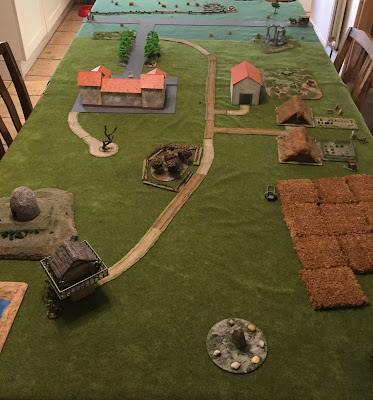 The table represented the civitas (in this case meaning a district) of Kerantrech, home of some members of the thoroughly Romanised Coriosolitae tribe.

A large villa (home of the local magistrate, a coriosolitae noble by the name of Syagrius) is the economic centre of the civitas.  A village stands nearby, it and the villa being set back from a nearby Roman road.

At the northern (near) end of the table a watchtower overlooks a small inlet.  A handful of soldiers of the local limitanei (border force) keep watch for Saxon or Irish raiders. 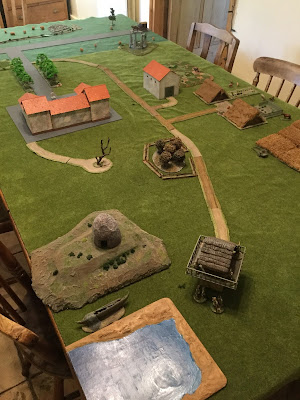 Jamie, Richard P, Kevin and Leo came over for this game.  Argad sits somewhere at the intersection of wargame and role-playing game.  The character roles for the players were:

Our story began with Antonius Mago, arriving on the road in the south, meeting up with the lady Genovefa who was travelling to Kerantrech to be with his sister, the wife of the magistrate, who was expecting her first child.

Antonius Mago had an escort of legionaries and some mercenary Alan horsemen.


The southeast corner of the civitas saw the arrival first of Bishop Severinus (come to baptise the child) and then of Clodis and his mixed force of Franks and Roman spearmen.

Argad moves pretty quickly and with Syagrius out patrolling the civitas and Ellifer busy trying to ensure that Bishop Severinus didn't bump into Malgwyn the Druid as the latter conducted a pagan blessing of the orchard, Clodis was soon in possession of the villa and seeking to dictate terms to all and sundry.

Clodis soon brow-beat Syagrius into supporting the new status quo.  The fact that Clodis had possession of the letters wife and newly-born daughter was pretty crucial here.

Meanwhile, Clodis found his newly achieved domestic tranquility disturbed who Antonius Mago's legionaries tipped over the statue in front of the villa and began digging under its plinth.

A fight developed between the Franks and the legionaries for possession of a strongbox found buried under the statue.  In the end the Franks were successful and Antonius Mago was forced to withdraw with nothing to show his sponsor back in Rome.  All in all it was a victory for the Franks - so in line with the broad sweep of history then.

As a final bonus, here's a shot that captures two random groups that entered into the action; in the foreground some Sarmatian mercenaries and in the background, Agravaine son of Lot with his Numidian servant seeking the Holy Grail (idea stolen from Fabrice of Argad). 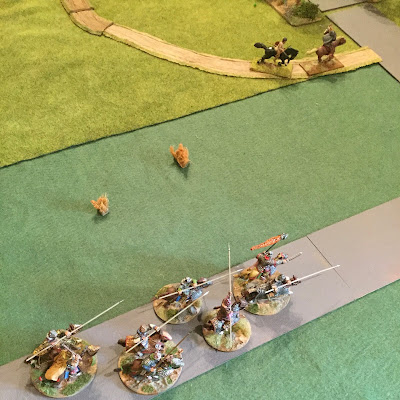 Posted by Counterpane at 2:12 AM

I've just discovered this AAR! :)
...and mentioned it on the (French language) forum An Argader
https://www.anargader.net/t2846-combat-pour-kerantrech-comptes-rendus-en-anglais

Glad you had a fun game.

BTW did you notice that there is a new version of the generic rules, April 2020 – not changing anything important but with more explanations, details, suggestions and ideas:
http://www.argad-bzh.fr/argad/en.html