Sometimes serendipity seems like an unavoidable force.  We're playing a Big Chain of Command game over the weekend at Gauntlet.  We're doing the British 1941 commando raid on Vaagso and for it we need plenty of smoke markers.  For CoC these should be 3" in diameter.

For a while now my terrain building drawer has contained a number of round promotional fridge magnets given out by a local company.  They just happen to be 3" in diameter.  I've previously used a few of them to make smoke markers using stuffing from a cuddly toy that had been eviscerated by our puppy.

This week, the realisation that I needed to make more markers coincided with my coming home from work to be met with, "The dog's destroyed that old duvet of Charlie's. I've saved you some of the stuffing; I thought it might be useful for something game-y."

A bit of brown paint and some work with the hot glue gun and we have... 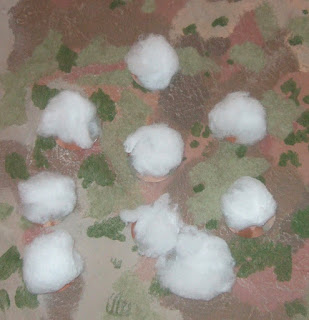 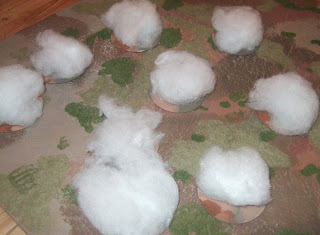 With the four I'd already made these additional nine should give me enough to represent the smoke screen dropped by RAF Hampden's on Vaagso and to have a few left for the Commandos' 2" and 3" mortars.

Posted by Counterpane at 2:37 PM