My air traffic control tower is now more or less finished. Here are some more work in progress shots.
First the process of adding glazing bars to the windows of the top floor. I used Slater's Microstrip for the three flat glazing bars on each side. 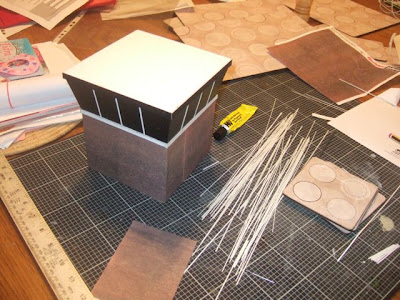 Then I made some L-section by glueing two pieces together with liquid polystyrene cement using the corner of a wooden tray (the one previously seen holding my recent 6mm purchases) as a jig. Cut carefully to length these formed the corner frames. 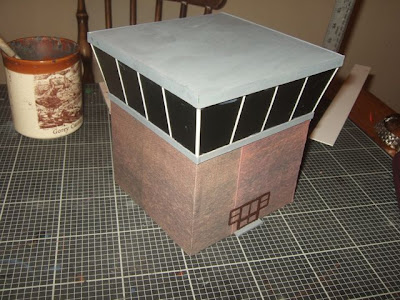 The doors are from a pack of injection moulded (Wills?) building parts I got from a model railway shop years ago. They looked a little low next to a based figure so I added a doorstep from two layers of card sandwiched together. The bottom floors are covered with brick paper and the windows have been undercoated in brown. 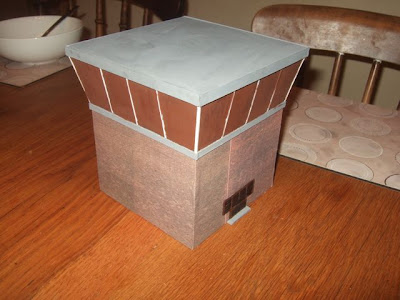 Finally, for now, the windows have been painted in GW Tin Bitz highlighted with Dwarf Bronze. 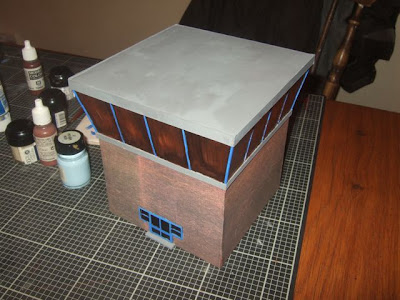 Posted by Counterpane at 1:38 PM No comments:

I'm not too familiar with Bundeswehr equipment but I think this is a pair of Marders and a Leopard of some kind.

Not enough to do much with. I suppose they could form the "West German forces retreating through your sector after being mauled by the Soviets".
Posted by Counterpane at 7:10 AM No comments:

My eBay purchases arrived this afternoon. I'm going to have a fun time deciding what to do with this miscellany of 1980s kit. 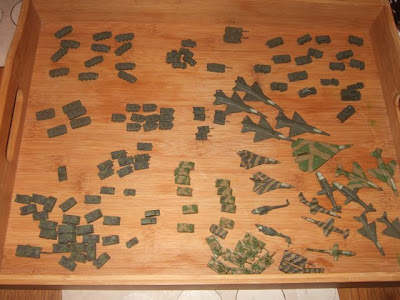 Among the highlights are:
More pics later when I begin to get the sorting done.
Posted by Counterpane at 11:27 AM No comments:

A day off means I'm making considerable progress on this baby.
The roof is now on. The roof is a sheet of foamcore. An edging of artist's mounting board overlaps the top of the windows and will make the whole thing much stronger. 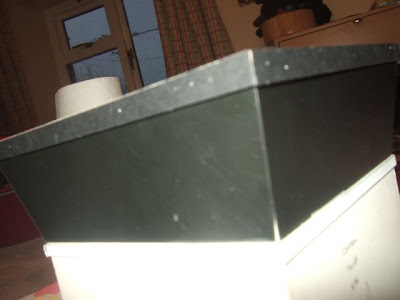 Posted by Counterpane at 7:08 AM No comments:

Having finished painting all of my modern 1/300th scale vehicles I had to go and do something silly didn't I?
I've just won a few auctions on eBay and am now awaiting delivery of what were described as "120 WWII tanks and trucks, 20mm". Having looked at the photos they were clearly 6mm scale and modern, not WWII. Some at least are Soviet - there are a couple of those big, truck mounted radar vehicles. There are also 18 assorted aircraft.
Works out at 18p a model. I'm looking forward to the lucky dip element of this. I'll post pics here when they arrive.
Posted by Counterpane at 5:15 AM No comments:

More progress on the air traffic control tower for Tcherbevan International Airport. The basic box shape of the building now has a string course of card around it. This will support the outward-leaning windows of the control room itself. 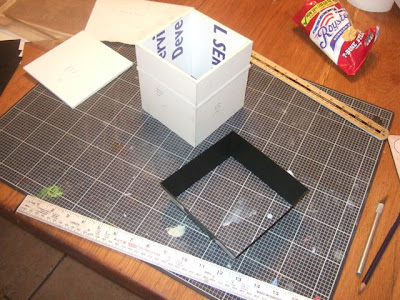 The windows are black plastic card. I'll be painting them - trying to get the effect of metallic coated glass. They slot over the body and rest on the string course. 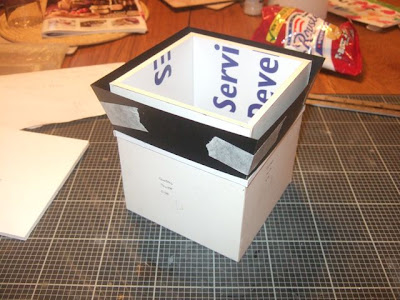 The final shot shows he roof in place (temporarily) with the windows secured with masking tape while the glue dries. I have some brick paper that I might use to cover the lower story. 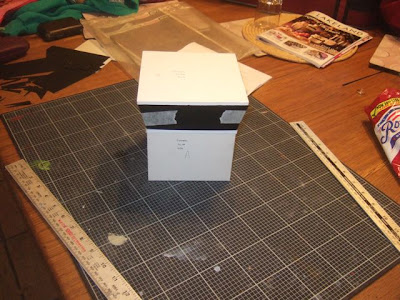 Posted by Counterpane at 3:12 AM No comments:

... or more precisely, on the kitchen table. 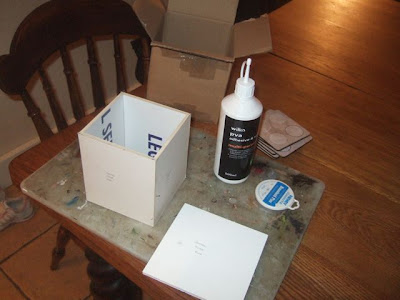 I've started building a control tower for the airport in my next 20mm moderns game.
The material is some foam-core I rescued from work when we moved to a new office building. A single sign pointing the way to Legal Services provided three walls and a couple of other pieces gave me the third wall and the roof.
The box in the background will be used to store the completed building. Always build your buildings to fit an available box rather than trying to find a suitable box afterwards!
PVA glue is great for sticking foam-core and dressmaker's pins make good temporary fixings while the glue dries.
Posted by Counterpane at 2:19 PM No comments:

The problem with running multiple blogs is that stuff ends up on one when it could reasonably be on another.
Current work in progress is a modern Arc of Fire game to take place in Meols (Wirral) on November 27th. An initial test of the terrain and some more details here:
http://andreivian-tales.blogspot.com/
Posted by Counterpane at 12:47 AM No comments:

Email ThisBlogThis!Share to TwitterShare to FacebookShare to Pinterest
Labels: Andreivia, Arc of Fire

Yesterday was Fiasco, previously at the Royal Armouries but now moved across the way to a nearby conference venue. To be honest, you could hardly tell the difference once you were inside.
This year it seemed more than ever to be a shopping opportunity rather than a games convention. I did far less than my share of the shopping though. I bought some dice. You need lots of d6 for Cold War Commander so I picked up a box of 36! I went with purple, which I figured minimised the chances of getting mine mixed up with anyone else's.
I also picked up a single Spartan APC in 1/300th (needed because some previous Spartans I bought turned out to be Stormers) and four painted T-28s that have gone straight into my WW2 Soviet army.
Finally, I bought some steel paper. Now I'm undecided as to whether I should put magnets on the bases of my 1/300th armour and use steel paper to line the storage drawers or vice versa. Decisions, decisions!
Posted by Counterpane at 3:54 PM No comments: