Somewhere in the Known World

Tom and Rob came over yesterday and we had a game of To The Strongest using my newly completed collection of 28mm troops for the Punic Wars.

Actually this was the first time I've had to whole collection out on a table at the same time and I was quite please with the look of the troops en masse.  I'm particularly please that I've managed to achieve this in about 13 months of building and painting! 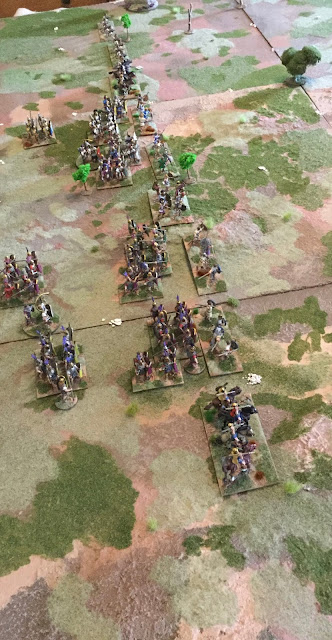 And the Carthaginians with their Numidian allies:

The scenario was a straight line-up-and-go-at-the-enemy job.  I prepositioned the armies but let each player have a bit of a switch around of units before we started.  I know that Rob repositioned his elephant and moved his Carthaginian general to be with one of his two units of Gallic warriors.  This was probably a good move as a big warrior unit backed up by a hero and a general is quite a powerful striking force (or it would have been if Rob's ability to draw the wrong activation chit just when it mattered hadn't come to the fore).

Tom, as the Roman commander Marcus Gaius Piso (on the left in the picture below),  moved first and threw his Roman cavalry forward on his right flank whilst his mercenary slingers moved towards the bad going forward on his left.  His centre was a bit slow getting moving. 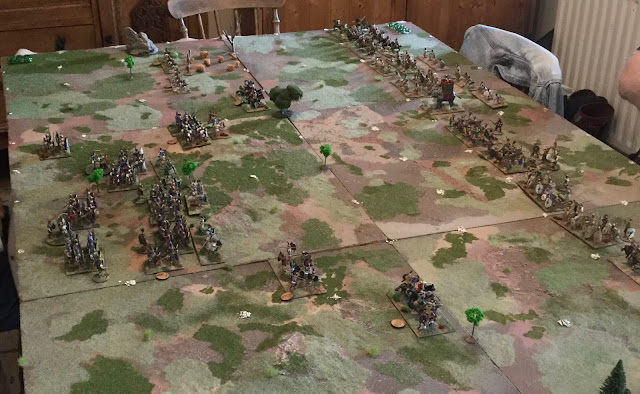 Rob, meanwhile, as Carthaginian general Hanno, pushed forward the Numidian light cavalry on his right wing but was unable to get the Catrthaginian centre moving at all! It seems the trumpet signal for a general advance was misunderstood as, "Let's wait here and see what happens". 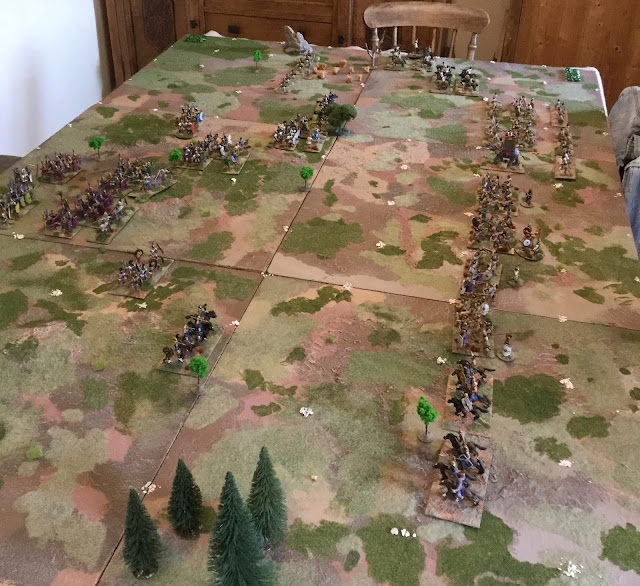 I had warned the guys that this was a game in which units could melt away a the drop of a hat if things went against you. Sure enough, the first offensive action of the game saw lead slingshot from the Romans' mercenary slingers caused a unit of Numidian light horse to flee the field.  More shockingly, they left behind the corpse of Prince Arabio, Rob's allied commander!  From now his army would be far harder to control. 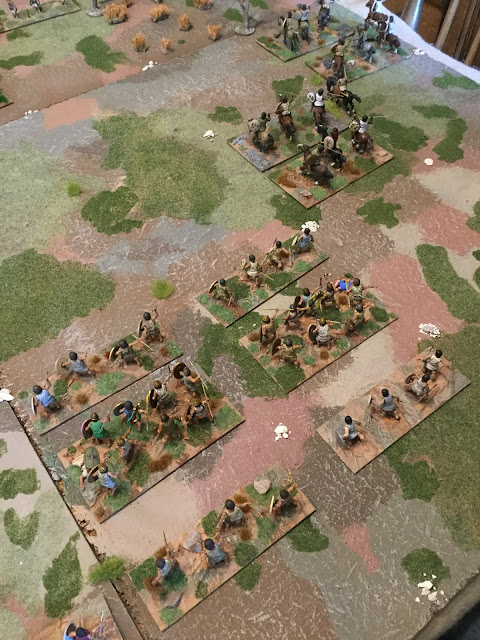 [In act it would have been even harder to control if I'd remembered to apply the "out of control" modifier to all of the Numidian command's troops for the rest of the action.]

The shot below shows the Gallic horse on the Carthaginian left.  You can see that I used a variety of means including single trees, grass tufts and small piles of cat litter rocks to mark out the corners of the square grid that these rules require.  This seemed to work nicely without being too visually intrusive. 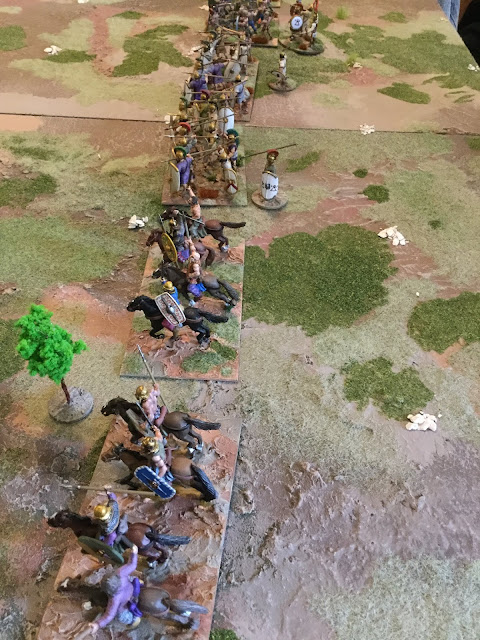 Command and control continued to prove unreliable for both sides.  The Latin allied legion (background in the pic below) moved forward aggressively but the Roman legion (foreground) seemed reluctant to move. 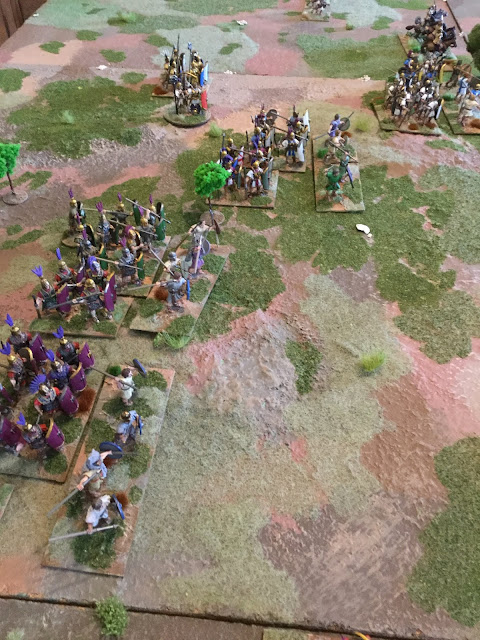 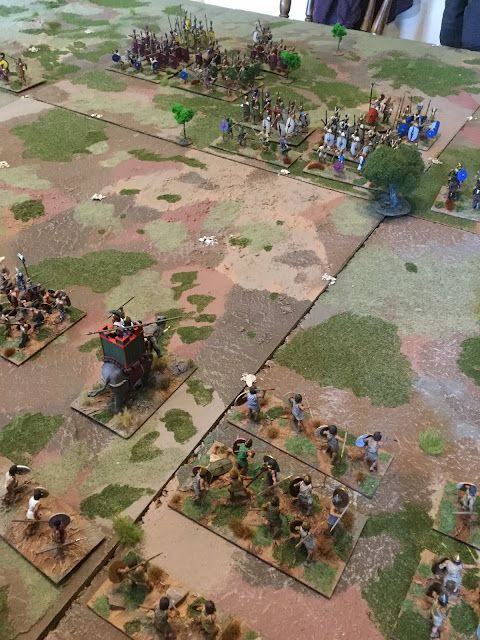 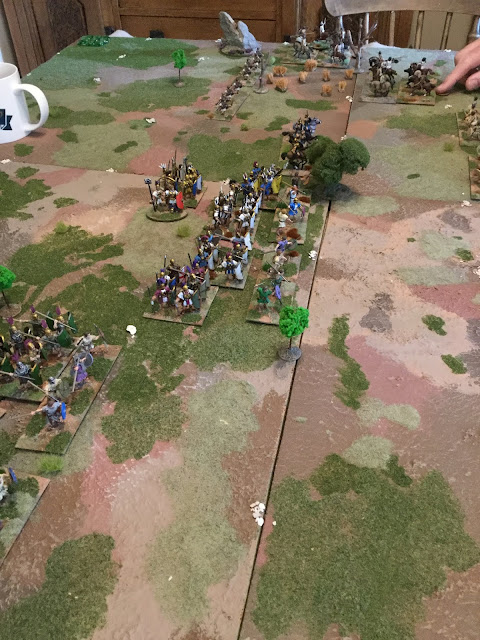 In the pics above and below we can see the Latin allied legion nicely lined up but further forward than the Romans proper.  Also in the pic below some allied Bruttian javelin men (left) are about to clash with the Carthaginian citizen levy (right). 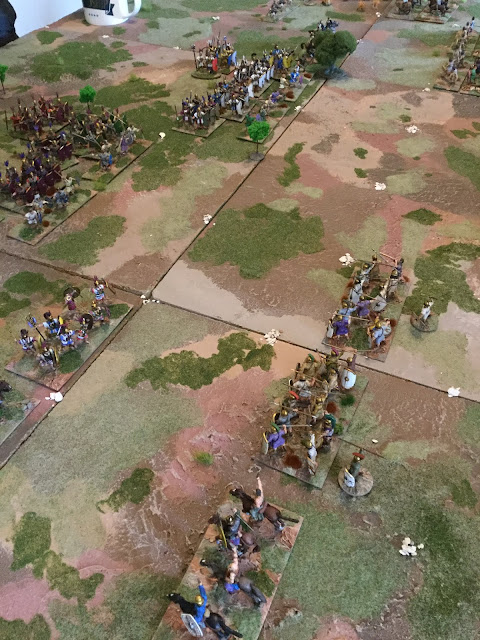 At last, a clash in the centre!  The Romans finally get moving and their Velites throw javelins at the Carthaginian spearmen while the aggressive Bruttians go in to close combat.... 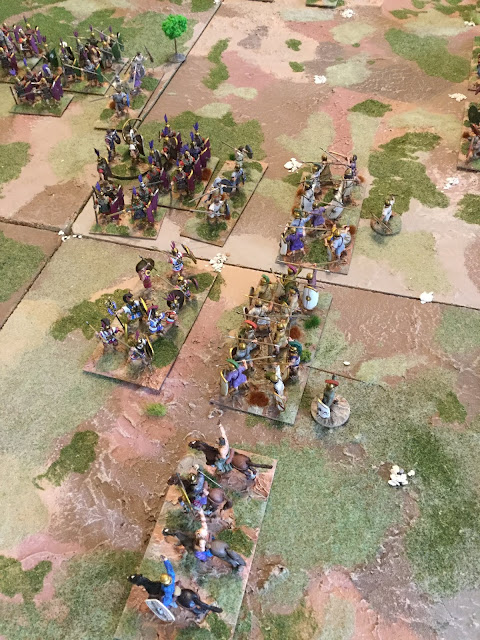 On the other flank, a confused melee develops.  Numidian light horse threaten the Roman left. 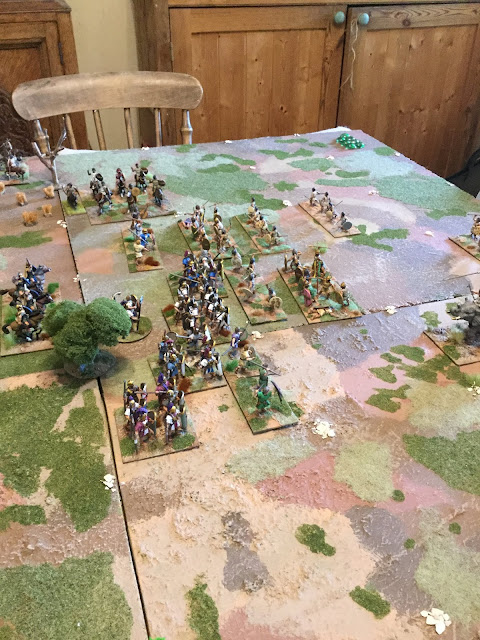 In the centre a breakthrough looked possible as a unit of Gallic warriors drove off some Roman Velites and pushed forward into the gap they left in the Roman line.  Unfortunately Rob struggled to get them to turn into the flank of the adjacent legionary maniple.

The Gauls are old Lamming 25mm models but I didn't feel that their lesser stature was too noticeable as we were playing. 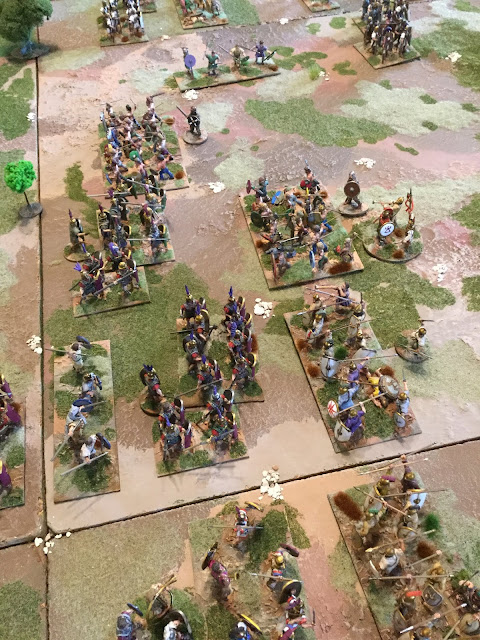 The confusion on the Roman left continued and as the Roman saying goes, it came down to the Triarii.  In the picture below, Numidian horse threaten Arius Marcus Scorpio, the Tribune in charge of the Latin allied legion (foreground) whilst Roman horse threaten the Numidians' flank! 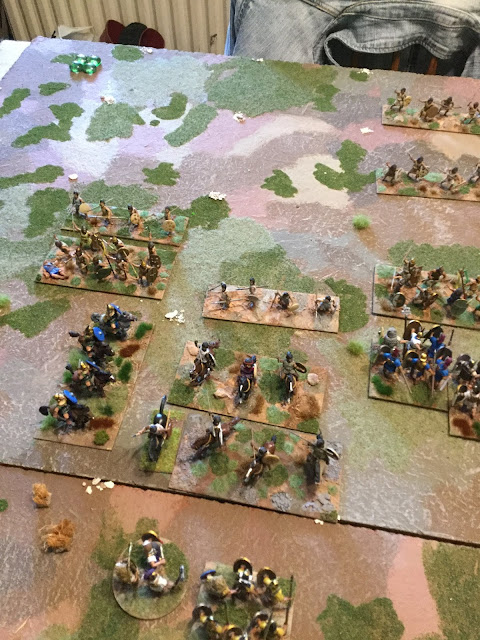 Marcus and the triarii are all that stand in the way of the Numidian sweeping into the Romans' left flank. 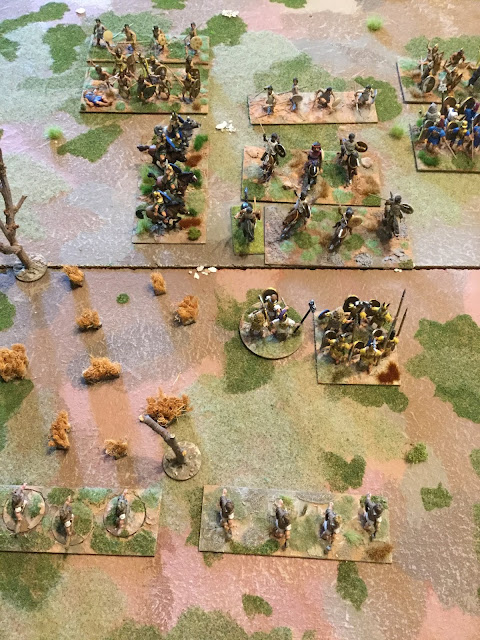 At about this time, the Carthaginian elephant, galled by Roman javelins, panicked and rampaged through the Carthaginian lines.  Fortunately Rob had left a space for this to happen and no further damage was done. 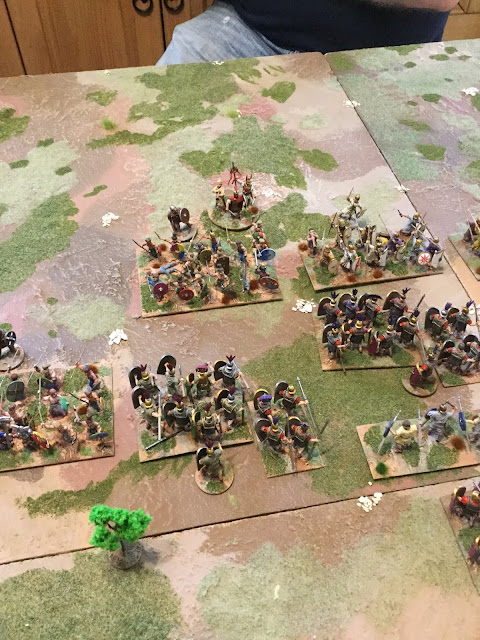 Throughout the battle, Rob had been taking a steady trickle of casualties.  In the centre a Roman legionary unit destroyed their Carthaginian spearmen opponents and split the enemy battleline in two.

Although Rob had finally managed to turn his victorious Gallic warriors into the flank of a Roman maniple, Carthaginian morale was faltering... 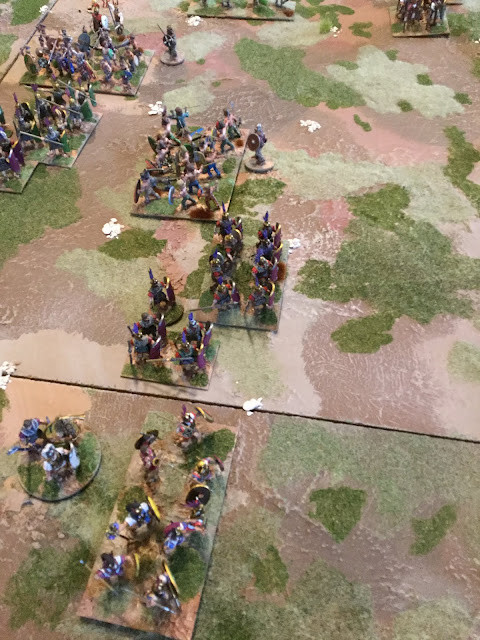 ... with the loss of a unit of Numidian spearmen somewhere on the right, the Carthaginians had suddenly had enough and their army broke for the hills.

The picture below shows the final position.  On both flanks General Hanno had superior cavalry strength but in neither case could Rob manage to draw the right chits at the right time to take advantage.  The loss of Arabio to a misfortunate slingshot in the first moments of the battle was crucial. Alive, he could have led his light horse to cause chaos in the Roman read. Dead, he was an early drain on Rob's store of Victory Medals from which he was unable to recover. 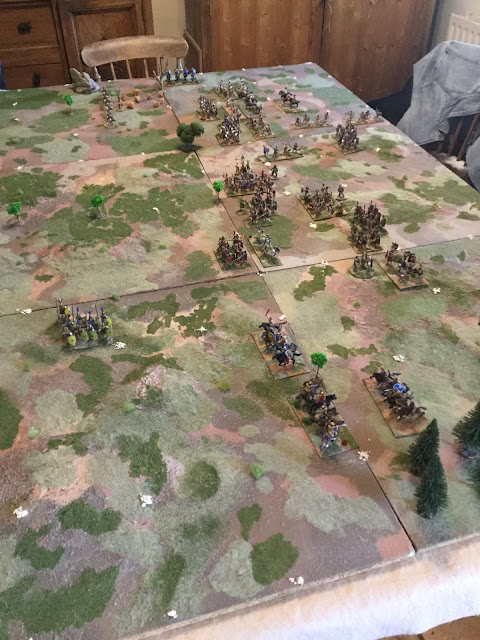 I'm pleased with how the game went though we didn't really get to try out the new rules for the Polybian legion's line replacement ability and of course the fancy new units (elephants, I'm looking at you) didn't perform as advertised.  Wargaming rule number one, the newly painted unit always fails miserably on its first outing!

Posted by Counterpane at 2:45 AM 2 comments:

More terrain for Joy of Six

I've just sort of finished three more terrain modules working on the basis of property boundaries being preserved over time. 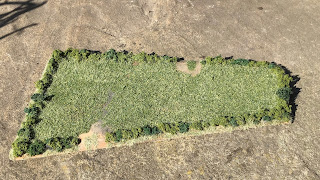 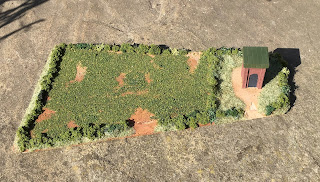 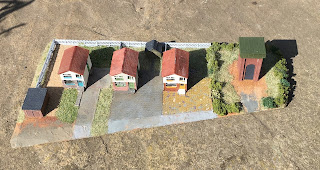 I say "sort of finished" because seeing the pics in close-up I've noticed a number of things I want to improve.  Crazy because they're meant to be seen at a distance but what can you do?
Posted by Counterpane at 1:46 AM 4 comments:

May the sixth be with you?

OK so I'm a couple of days late posting about Star Wars....

A colleague at work who's a Star Wars fan alerted my to Fantasy Flight's announcement of a second edition of the X_Wing Miniatures Game. 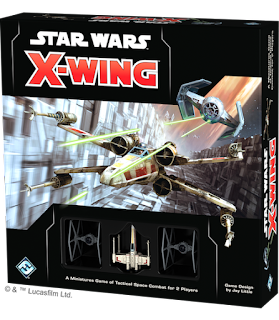 Now I'm not a great Star Wars geek but enjoy getting in the odd game of X-Wing and I'd like to own the main ships from the movies.  By 'main ships' I pretty much mean those I can remember and to be honest that's not that many.  I have several X-Wings and Y-Wings, loads of TIE fighters and Vader's TIE advanced, the Millennium Falcon (of course) and the fancy Lambda class shuttle.  Oh and of course a couple of TIE bombers because they look so cool.  Apart from Slave 1, there's not a lot more I'd definitely want to get.  After that it's just a case of picking stuff up if I see it going cheap.

I've no desire to play in organised tournaments.  X-Wing for me is mostly going to be a game we pull out when we have players gathered and no game planned.  Occasionally I'll plan a large, multi-player game like we did last Christmas.

So what should be my response to the new edition?  Do I want to buy the conversion kits you need to use your old models with the new rules?  Unlikely; I have ships from all three factions and at $50 per faction-specific kit that's a silly amount of money to spend.

So is the answer to carry on playing the old rules?

I can see why, apart from the commercial advantages, FF would want to update the rules.  They have rather grown piecemeal by virtue of what amount to new rules appearing with every new expansion pack.  A chance to review everything and make sure all the interactions are policed and properly integrated is probably A Good Thing.

On the other hand, with none of my regular gaming gang being fanatical X-Wing tournament players desperate to extract every ounce of advantage from minute study of "the Meta", I think we can probably manage quite happily with what we have now.  It might be a good idea to capture a copy of the latest of the First Edition FAQ though!

The new rules are promised to be (by virtue of new manoeuvre dials in the conversion kits) backwards compatible with the old ships.  FF would have had a riot on their hands if they'd done anything else! However, that doesn't mean any new ships that come out will be usable with the old rules.

So what are the chances that any new ships will come along that I'm desperate to include in my X-Wing games?  I quite like those big, tall bombers in the latest film (see, not a real geek; I can remember the names of neither bomber nor film) but you can buy those already.  Lets face it there's only a limited number of really iconic Star Wars ships.

Hmm, I think on balance I'm happy to remain blissfully old-school as far as X-Wing is concerned.

On the workbench - Nellie

Nearing completion - needs shields and javelin cases painting and attaching to the howdah.  Oh and then lots of tufts and static grass on the base. 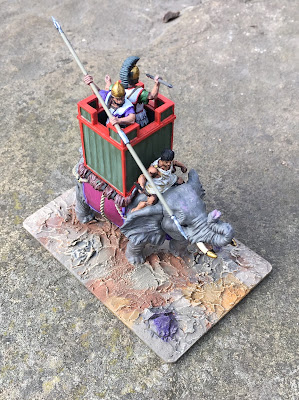