Having used all of the suitable field caps from the Perry's plastic Prussian infantry to convert my ACW infantry into Mississippi Marine Brigade types, I thought I'd have a go at sculpting some of my own.

After a little experimentation I think I've come up with something that'll work. 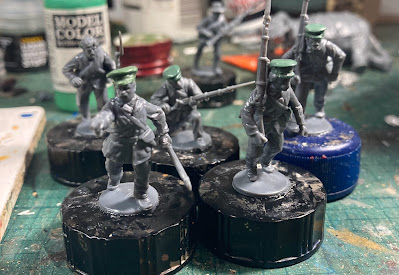 The Perry ACW figures come with whole heads that are bald but for a rim of hair. You can then glue on separate caps or hats. I've actually painted one or two in the past as hatless chaps with male-pattern baldness! This has the advantage that the head provides a nice large surface on which to sculpt alternative headgear.
My developing technique is to put a blob of GreenStuff on top of the head and shape it into a low cylindrical shape. I'm being less than scrupulous about cleaning up the sprue mark on the top of the head as it adds some roughness that helps the Green Stuff to stick. Sorry, pictures that follow are the final result, not step by step. 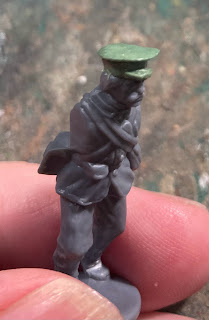 The crown of the hat is then another ball of Green Stuff that I've previously flattened into a disc. Press on and push into shape. 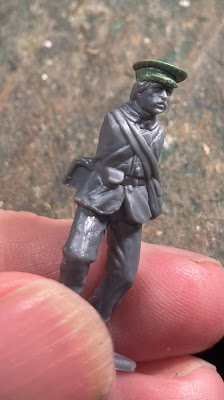 Finally, a small piece of Green Stuff forms the peak. I've found the best way to apply this is to shape it roughly before applying it and pressing it onto the cap with a sculpting tool. I then squeeze it into shape with a pair of fine pointed tweezers.

I need to paint up these samples to see what I think of the finished items. If I'm happy they'll save me buying a whole box of Atlantic Prussians just for the caps!

Posted by Counterpane at 1:31 AM 2 comments:

Whilst in London on Tuesday I popped into Orc's Nest on Earlham Street and picked up another box of Perry ACW infantry. The last box if these I bought became the main body of my Sharp Practice Mexican Republican force. This lot are destined to help me portray Ellett's Mississippi Marine Brigade under the same rules.

This unit is going to need a large number of peaked caps. I've used up all of the service caps from my Napoleonic Prussian infantry. If anyone has any going spare I'd be very grateful.  In the meantime I've had a go at making one from Green Stuff and plastic card (rear left). We'll see how it paints up. 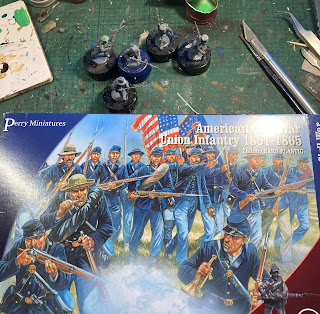 These infantry can be added to a few other figures I made earlier but haven't previously revealed here. These first two were left over from the Mexican Republican infantry project. 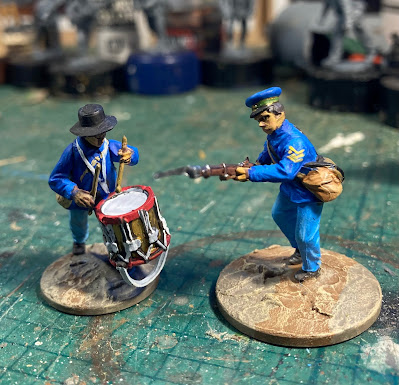 While the artillery box I bought, also for Mexico, is in the process of providing the Marines with some useful firepower. Another crewman in needed and there's a little more weathering to do on the gun. 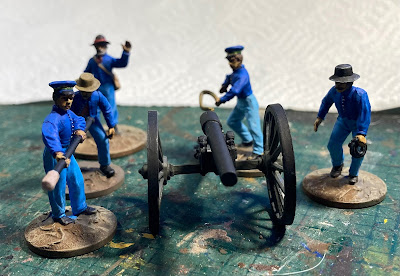 Posted by Counterpane at 7:00 AM 7 comments:

I have rather too many 1/300th scale FV432s. I'm very unlikely to field a 1980s British force with two mechanised infantry battalions in a Cold War Commander game so I've been thinking of ways to use what's left over.

This picture, found on the Internet, inspired me to have a go at building an FV432 with 120mm Wombat RCL on the basis of a FV432 mortar carrier. 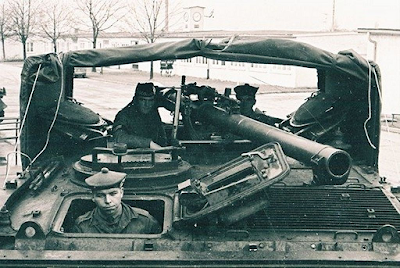 A length of plastic rod and a couple of cut-down 1/300th scale gun crew figures gave me a basis to work on. A bit of Liquid Green Stuff allowed me to create the flared-out rear of the recoilless launcher tube and the balance weight under the business end of the barrel. 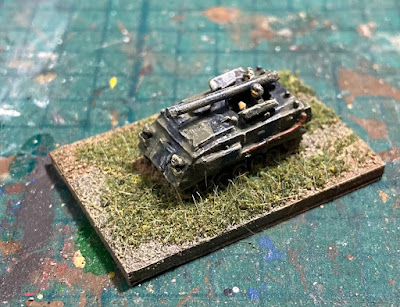 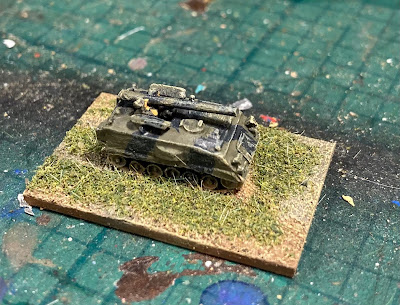 It's crude but it'll do.

Posted by Counterpane at 9:50 AM 2 comments: