On the Workbench - October

This month I'm hoping to complete the process of rebasing my old Wars of the Roses figures for use with Basic Impetus.  Most of the decent figures are done now and what's left has an increasing proportion of old RAFM figures I bought in a sale at Games Workshop in Sheffield back in the days when (a) it sold non-GW products and (b) its staff included Pete Berry now of Baccus fame.

This lot have made it onto a BI base.  Because the bases are quite large (12cm frontage) I'm using artist's mounting board of a thicker  grade than usual.  The terrain texturing is my usual mix of tile grout and brown poster paint.  It'll get painted in two shades of earth brown and then dry-brushed with progressively lighter shades: Graveyard Earth, Camouflage Orange Ochre, Khaki, Iraqi Sand, and 50:50 Iraqi Sand and White. 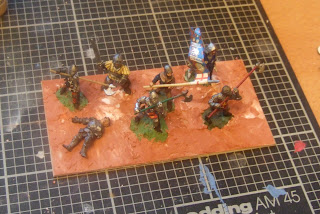 In both pictures there are figures from a variety of sources.  The RAFM dismounted knight in black and white below (second left, rear) is in the process of conversion.  His head has been removed, turned, and pinned back in place.  He'll get the join disguised by building up his mail aventail in Green Stuff and will have a polearm held with the buisness end down and to the left rather than up and to the right.  This kind of simple conversion can disguise the fact that you have several of the same figure in a single unit. 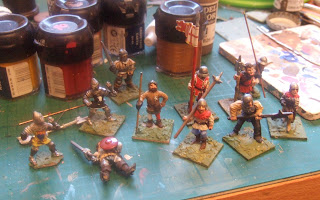 Posted by Counterpane at 11:31 PM No comments:

Not so much lead this time but lots of plastic.  We move on to look at my accumulated 20mm scale stuff.  I don’t tend to regard the plastic figures as needing to be painted.  Often I buy a boxful knowing that only really need a dozen or so for a particular game but let’s have a look at them anyway.
So, plastic figures: 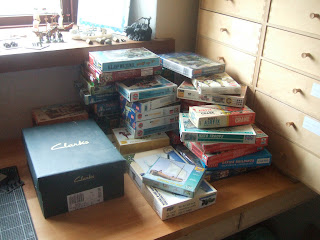 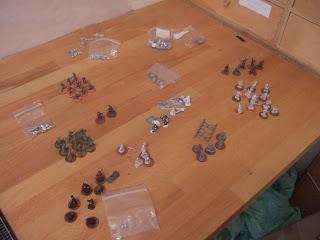 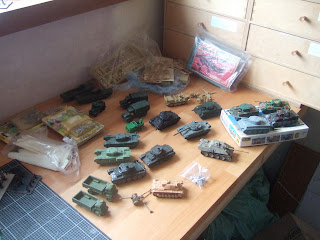 In addition there’s a shoe box full of assorted plastics that I haven’t the heart to try and classify.  Another three hundred figures?  Oh, and a drawer containing about 100 old Airfix American Civil War types that I've based on pennies for skirmish gaming - their bases need painting and then I'll... probably not use them.
Posted by Counterpane at 1:56 PM 1 comment:

Investigating the Lead Pile - part one

I've been thinking of late that it might be interesting to see just how much stuff I have left to paint.  So here's the result of a trawl through the boxes for 25/28mm figures. 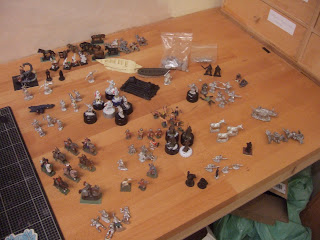 Now this isn't usually a prime scale for me - mostly just Gloranthan Hordes of the Things but of late I've been basing any suitable figures I can find for Basic Impetus so what I have here might see action via that route.  So what do I have?  Well...
For Glorantha:
Potential Basic Impetus stuff: 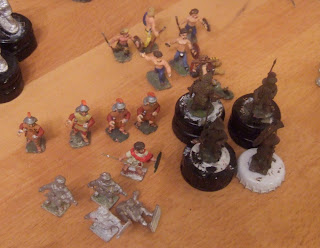 Assorted other stuff:
So, can I get all this painted (or sold) in the next twelve months?  Can I be bothered?  What else is there waiting completion?  Look out for more news here.
Posted by Counterpane at 2:44 PM 2 comments:

Some pictures of the SOTCW Barnsley event here:

http://sotcw.blogspot.com/2011/09/saturday-in-barnsley.html
Posted by Counterpane at 11:43 PM No comments:

Off to Barnsley Tomorrow

The life of the Events Co-ordinator for an international wargames society is perhaps not as glamorous as some would suppose but every so often one does get to experience the highlights.  And what could be more redolent of glamour than a trip to Barnsley, that jewel of the West Riding?

SOTCW will be "gathering" at the premises of Barnsley Association of Wargamers tomorrow to play the odd game and maybe drink the odd pint.

I've been suffering of late from the twin evils of pressure of work and demotivation brought on by society politicking so I've not done as much as perhaps I should have in terms of promoting the event but there has been a rash of volunteers to put on games so things shouldn't be too awful.

Maybe I'll manage to off-load some of the lead pile.  Maybe I'll come back enthused to get on with some of my old projects.  We shall see.
Posted by Counterpane at 11:12 AM No comments:

Whenever I finish a project like The Wolf Pirates I usually go one of two ways.  Either I stop painting for weeks on end or I have a rush of enthusiasm for some other scale or period.  This time, though, the old noggin has obviously not had enough of 28mm Gloranthan goodness and has pushed me to paint this Sartarite weaponthane: He's a Black Tree Celtic Chieftain (or something like that).  He'll doubtless eventually end up on on a HOTT Warband base but for now he can sit in the display cabinet with some as yet unbased Sun Domers and Lunars. 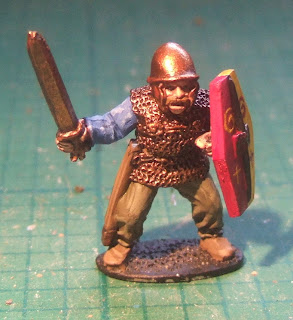 Posted by Counterpane at 11:01 PM No comments:

There wasn't a prize for "best shirt" at the Berkeley Hordes of the Things tournament but if there had been it would have been won by Tony Horobin with this one: 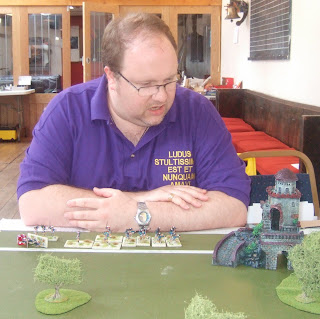 The Latin "Ludus stultissimus est et nunquam amavi" apparently means, "It's a most silly game and I never liked it"!
Posted by Counterpane at 12:22 AM No comments:

Email ThisBlogThis!Share to TwitterShare to FacebookShare to Pinterest
Labels: HOTT

I thought I'd post some more pictures from last weekend's Berkeley HOTT tournament.  Firstly, here's a shot of the crucial moment of my game with Jane Williams.  Jane has just realised that by moving her two Heroes (Kallyr Starbrow and Kostajor Wolf Champion) into the bad going, she has slowed them down and lost her chance to prevent Harrek and Gunda (top right) taking Boldhome. 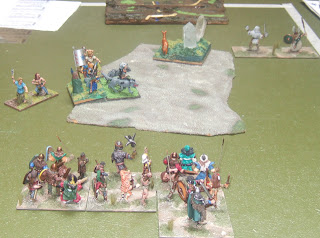 Next, another Wolf Pirate victory.  Sorry, I seem to have more pics of my victories than my defeats!

Steve Price has just two skeleton Hordes left on the table at the end.  His four Lurkers were taken out of the picture by my carefully avoiding entering any Bad Going, whilst Steve did roll 6 PIPs once but couldn't spare them to bring on his Dragon!

As usual there were some lovely armies hanging around.  Here are some Elves I snapped.  They could be by James Ewins?

And finally, Gus Woodward's "interesting" Aliens terrain.  I've been instructed to vet Gus's terrain for playability before next year's event! 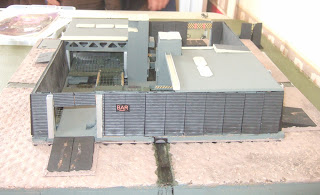 So I'm back from the annual Berkeley Hordes of the Things tournament (it's actually at Slimbridge but it used to be held at Berkeley) and I had a great time as usual. 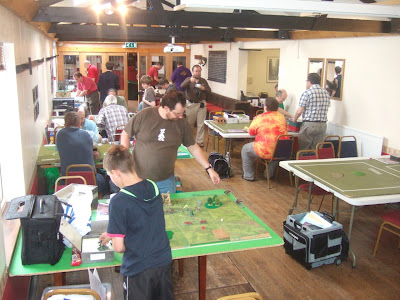 Most pleasing was the Wolf Pirates' performance.  I got to use them in five games and they won all five!  Apparently they suit my style of play - which is a nice result given that I was very much driven by the source material when it came to allocate the models to unit types.

Here we see the Wolf Pirate mass about to hit Steve Price's skeleton battle line.  Soon the Skeletons would be a large pile of bones and their necromancer general would be dead. 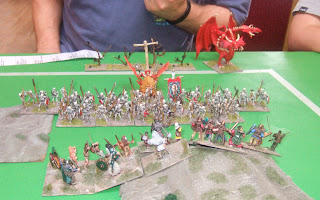 To be fair, though, Steve did say that the Wolf Pirate army make up was exactly the worst for his army to face.

Posted by Counterpane at 12:32 AM No comments: