I've just completed a building to form the centre-piece of either Fort James or Fort Charles in the Woebetide Islands. 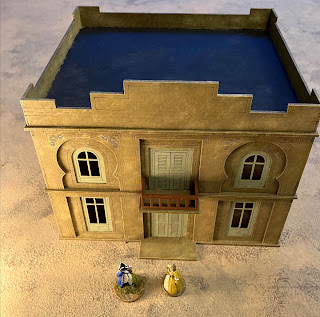 It's Sarissa's Administration Building. They intend it to be used in North Africa, for Tobruk perhaps, but I think it works OK as an eighteenth century house to act as the residence of the either the British Factor or the French Comptoir. In passing it's worth noting that I could use it as a building in Matamoros for my Maximilian Adventure games too. 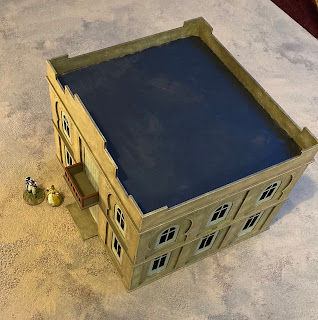 I've built the model straight out of the box... bag... erm... clingfilm packaging.  Finishing was done by painting the whole with Standard Paints Earth Brown and then stippling on progressively lighter colours from Vallejo - Middle Stone, Cork Brown, Dark Sand, and Iraqi Sand.

Now I just need to come up with another house for the side's leader!

Posted by Counterpane at 4:42 AM 7 comments:

Between 2010 and 2012, my attentions wandered away from Andreivia. During this time I'd started up Crisis Point, a gaming weekend taking place once a year near Sheffield. We first played large games of Cold War Commander and for a couple of years, getting together with fellow wargamers to play big games of CWC steered me away from developing my imagi-nation.

However, I eventually came to the conclusion that we'd taken CWC as far as I was interested in going and arguably further than it would comfortably go in terms of game size. I decided that I wanted to take Crisis Point in a different direction and Andreivia seemed like a direction worth pursuing. Fortunately I managed to persuade a number of the regulars to transition to a new ruleset, a new scale, and (for many of them) a new setting!

Crisis Point 2014 was to take us to Andreivia and the fighting for control of the capital city Tcherbevan. As a result of the previous game, we knew the layout of the airport and that the Russians were, just about, in control there. We also knew, from the timeline originally developed for the Tuzkhur Valley game, that NATO forces were attempting to get through to Tcherbevan from the south.

This allowed me to propose the following layout for a game to take place over Crisis Point weekend in spring 2014. A single, very large, table would represent the whole of the Andreivian capital and some of the surrounding area. 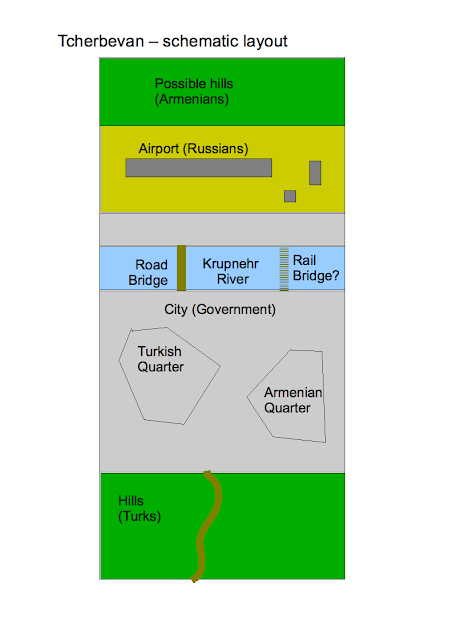 Among the previous Crisis Pointers prepared to give the new approach a go was Richard Phillips who would go on to play a very significant role in the development of Andreivia, not least because over the next few months he constructed much of Tcherbevan city centre!

It was obvious that the action at Crisis Point would feature particularly fierce fighting between the Turks and the Armenians. I needed a name for the main road between their respective Quarters and it was here that a joke from the aftermath of the first Andreivia game came to fruition.

I'd published a "Cast List" following the Tuzkhur Valley action as a way of thanking those who had contributed. In the small print at the bottom of the credits I'd included a copyright notice on behalf of the Andreivian Ministry of Culture with an address on Culture Ministry Boulevard. In retrospect, it seemed only appropriate that Culture Ministry Boulevard should form the boundary between the two factions' territories.  Richard Phillips even provided the ministry building to go at the northern end of that fine avenue, once known as the Champs Elysées of the Caucasus.

Before we got to go ahead with the main action at Crisis Point, I managed to get in a practice game at Christmas. A number of Andreivia fans fought a prequel action between Andreivian Armenians and Andreivian Turks.

This game allowed us to identify a couple of locations where the border between the rival areas wasn't as clearly defined as it might otherwise have been!
In fact I managed to squeeze in another Andreivian game just after Christmas. Robin Phillips was visiting family in the Sheffield area and we got together so I could demonstrate Arc of Fire to them and hopefully encourage them to come along to Crisis Point.  The game would indeed meet these aims but it would also plant the seed of events in Andreivia over the following two years.
Robin played a unit of Mujaheddin operating from a village in the Turkish-held Southern Hills (the hills south of Tcherbevan - the Andreivians can be very literal in their geographic nomenclature). They had to sweep the edge of their territory looking for a troublesome SAS forward observer team.
By leaving a covering team in position while the observer team proper withdrew, I managed to get two SAS men captured by the Islamists. These two MIAs would go on to provide the excuse for several recon and rescue missions in future games.
By the time Crisis Point 2014 came around, the idea that Andreivia existed just to enable me to use my pre-existing collection of assorted modern military materiel was recognisable as the delusion it had always been. Now I was buying miniatures and building terrain specifically to explore the history of Andreivia.
At this point I really need to give huge thanks to the Crisis Point attendees whose contributions of units to the games went a long way to contributing to the look of Andreivia. Ian Shaw, in particular, added to the gaiety of the nation by designing a number of very convincing-looking local modifications of T-34 tanks.

Tcherbevan at Crisis Point 2014 was deemed a great success and so we decided to continue the action the following year. This time however, I developed plans to include the players more actively in the development of the story.

With plans to switch to a multiple table approach, I expanded the geographical scope of the game and created a regional map. 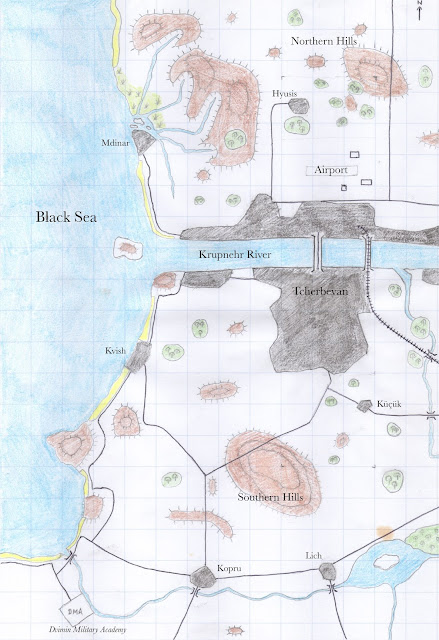 This was substantially built on "facts" established in the previous games. The Dvimin Military Academy exists because, early in Andreivia's history, I'd painted up some really old (type one) Airfix WW2 German infantry in khaki and grey uniforms and said that they were students of that venerable institution.
The smaller place names came largely from a few minutes on Google Translate. Kopru (albeit lacking a few diacritic marks) is Turkish for "bridge" while Küçük is "small".
This more informative map was created to give a starting point for the Andreivia players who were to create background for the 2015 weekend by means of a Matrix Game over the preceding couple of months.
The Matrix Game would be played by email. Players representing the various factions in the campaign (the Russians, NATO, the Andreivian Government, the Andreivian Turks, and the Andreivian Armenians) presented arguments as to events occurring in Andreivia. As umpire I assessed the strength of each argument and rolled an ordinary six-sided die to see if it succeeded (from very strong on a 2+ to very weak on a 6+). Every time an argument was successful it would establish a new fact in the history of Andreivia.
An interesting wrinkle here was that sometimes the likelihood of a proposed argument would depend on the attitude of another player. For example, when NATO proposed a UN resolution that would significantly increase their strength in Andreivia. In reality the Russians would have a veto on the vote so I sought the views of the Russian player (Tom Zunder in his only Andreivian involvement to date). Given Russian opposition, I declared the argument to be very weak - it would only succeed if there was some last-minute horse trading at the UN or if Yeltsin was even more of a loose cannon than normal.
This process saw the Russians land an amphibious force near Mdinar but also suffer a disastrous collision between ships from their task force. This would limit the forces available to them during the game.
The Andreivian government tried (but failed) to gain international support through resolutions in the UN and NATO similarly failed to gain UN support for increased military resources in the south. Part of this effort saw the deployment of an Italian special forces unit to Tcherbevan. They would go on the play a significant role in the fighting.
The Andreivian Armenians and the Russians got involved in an escalating series of arguments with the Armenians spying of Russian deployments and the Russians trying to sow dissension in their ranks. Andreivian leader Serj Benkian rose to increased prominence during this period.
On the construction side, I wanted a centrepiece for the capital city and if it could be ridiculously impressive then I'd be pleased. The Andreivian Television tower was the result.

At Crisis Point 2015 the tower would be the scene of a fierce little gun battle. On the Saturday afternoon the player commanding the Italian component of the NATO forces told me he wanted to infiltrate a special forces observer team (their presence previously established by a Matrix Game argument) into the restaurant at the top of the tower. The following morning, as we began day two's action, the commander of one of the Andreivian militias decided that he too wanted to control the tower.  Clearly the Italians had got there first and, as a result of a few die rolls, they were able to ambush the militia arriving at the top of the tower. The day began with a short, sharp firefight with all of the players looking on and a somewhat out-of-the-ordinary battle honour was added to the history of the Italian Army.

When my models and Richard P's were laid out together we had a really impressive city!

The 2015 leg of the fight for Tcherbevan resolved a lot of issues. NATO had a fairly secure logistic corridor from the Turkish border to the capital, the Russians controlled the bridges over the Krupnehr River, and the various Andreivian factions had fought each other to a standstill.
In the last hour-or-so of the game, elements of the American 101st Airborne arrived by helicopter in the southern suburbs. In a neatly choreographed operation, they stopped and searched a civilian car approaching their perimeter. The car contained the Andreivian Armenian leader Serj Benkian and a couple of bodyguards. Faced by overwhelming American firepower the Armenians surrendered and Benkian was taken into protective custody. This event would provide the seed for the next chapter but we'll cover that in part four.

Jamie and I popped into Sheffield city centre for the first time in weeks (if not months) on Saturday. I visited Waterstones to order a book for Stella's birthday and then went next-door to Wargames Emporium. It was great to be able to browse in a real games shop!

I came away with the box of Prussian infantry I've been planning on getting dice I admitted my desire to do Napoleonic Sharp Practice in 28mm. 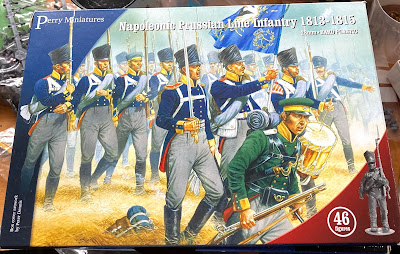 This box should give me a whole Prussian force to pit against Richard Phillips's forthcoming Russians.

Having decided to liberate the moths in my wallet, it was only polite to purchase a resin torture chamber by Zitterdes (it'll doubtless appear in the next game in the Song of Pavis campaign) and a nice, new red sable paintbrush.

Jamie took advantage of the nine-for-£20 offer on Vallejo paints fo I'll have plenty of opportunities to try out the new brush!