On Saturday, Jamie and I along with a collection of the fattest and lardiest gathered at Jury's Inn in Sheffield for the first Steel Lard.  The event was ably organised by Tom Davis.

Tom had arranged things so that all of the players could play two short games and one long game.  I was umpiring throughout but I know Jamie got to try WW1 Chain of Command and Algernon Pulls It Off as his short games and a longer game of Sharp Practice set during the 1812 retreat from Moscow.  Other rules in use included Dux Britanniarum and  Richard Clarke's new Infamy Infamy.

In the morning I ran twice through a small Sharp Practice 2 scenario based on a solo game I'd originally played when I only had a few Maximilian Adventure figures painted.

Near the town of Tlaliscoya, a couple of groups of contre-guerillas, lost in the dense forest at night, have stumbled upon a deep gorge with a bridge defended by liberal guerrillas. 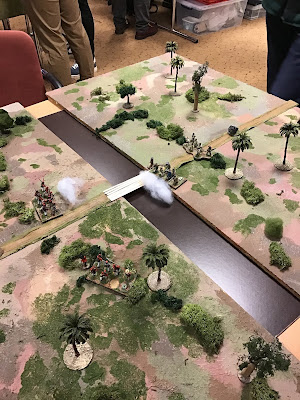 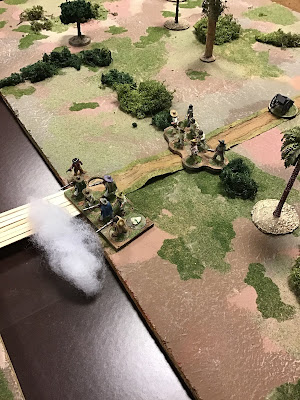 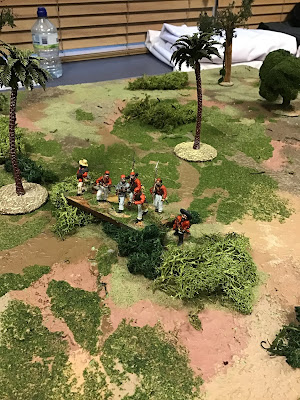 In the first game we had a narrow contre-guerilla victory with the red-coated contres making it onto the bridge as Tom called time. 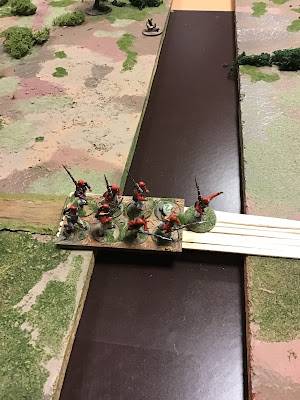 The second game was a bit more one-sided.  The contres managed to get to the bridge first thanks to the vagaries of the activation system.  At one point they even managed to form a line formation of two groups.  Again time beat us but this time I was able to call a clear contre win. 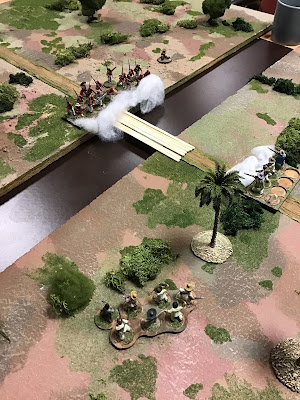 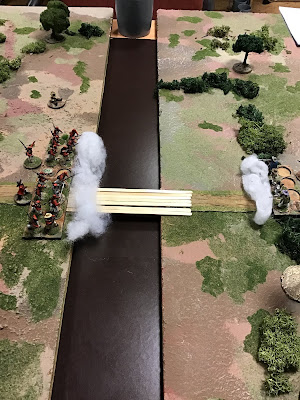 The bridge, by the way, was an emergency structure put together using the Jury's Inn's coffee stirrers wen I decided that the bridge I'd originally planned to use was too short. 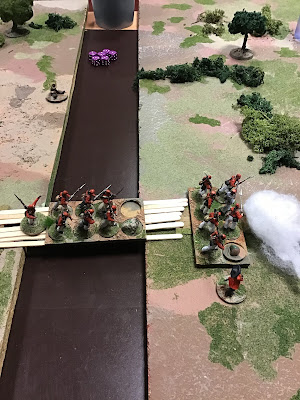 In the afternoon I reset the terrain and we played my Menton 1940 scenario. 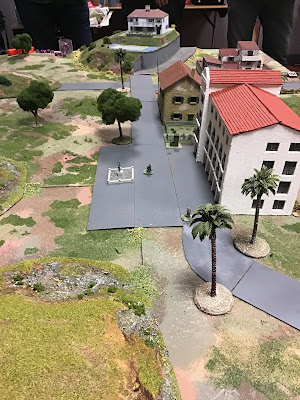 This was the fourth run through of the game after Crisis Point and a couple of goes at Posh Lard.  I think that's enough now. 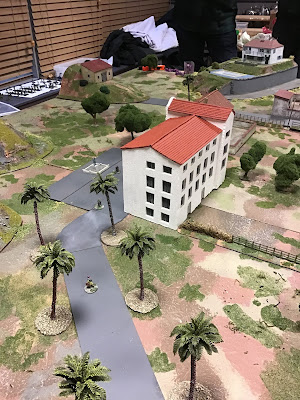 This time was the first time we've played the four-player, semi-historical version in which the French get Renault FT-17 tanks.  The game was OK but it got bogged down into a fairly static fire fight after two of the three French tanks had been taking out by a well-positioned Italian anti-tank gun.

I'd like to thank all of my players, who maintained a cheerful disposition despite the slings and arrows of outrageous fortune.

After packing away the toys, Jamie and I joined the merry throng at the Olde Queene's Head for a couple of drinks where Jamie was honoured with the "Hen of the South" award for most cowardly behaviour of the day. 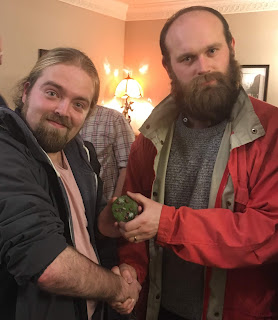 Apparently, during the 1812 game he had refused to order his Russian militia to suicidally charge French grenadiers but had instead concentrated on mounting an artillery bombardment of a column of starving and frozen French civilians!
Posted by Counterpane at 2:29 PM 1 comment:

They've all got it in fer me!

Rich of the Too Fat Lardies seems to have settled on a name for his forthcoming ancients large skirmish game.  Disciplina et Virtus (or was it the other way round?) looked favourite at one point but it seems he's settled on Infamy, Infamy!  Than which, I'd say, there's no name more Lardy.

The rules clearly owe something to Sharp Practice.  Sharp Practice cards and force morale trackers are visible win the pictures on the Lard Island blog.  I believe Rich is also in contact with John Savage who ran a really nice-looking Sharp Practice Ancients game at Ebor Lard. 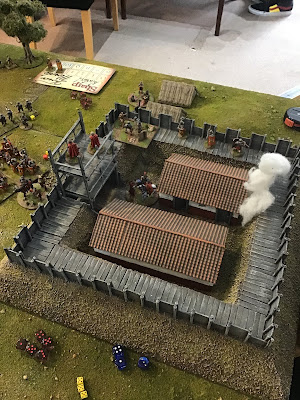 Between the two of them they really do seem to "have it in fer me".  I'm getting seriously tempted to start recruiting Imperial Romans and barbarians in 28mm scale.

I say Imperial Romans because it seems the rules will have a specific focus on first century combat along the limites of the Empire.  OK, I can imagine myself writing scenarios in that context. 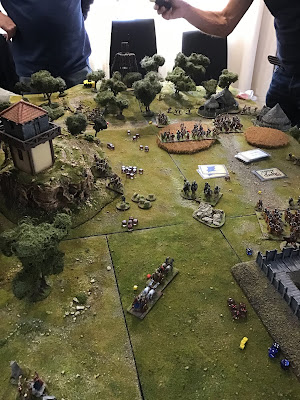 There are early Imperial Romans available in plastic so a 50-odd figure force wouldn't be too onerous to recruit. Or I could adapt the rule to accommodate late republican forces and use my existing Punic War collection.

What I'd really like to do, though, is to make some better use of my fifth century Gaul forces - the Bacaudae and their opponents. 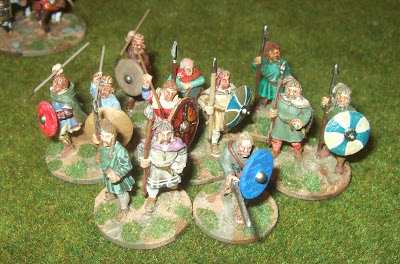 So should I get Infamy, Infamy and adapt it to the fifth century?  But then TFL already do a game, Dux Britanniarum, that's aimed exactly at that period!

Fortunately, I'll be at Steel Lard this coming weekend when Richard will be running Infamy Infamy and Mike Whittaker will be running Dux Britanniarum.  Somehow I just need to avoid being so busy running my Menton 1940 game that I don't get to see anything of the two games in action.

Posted by Counterpane at 2:04 PM 2 comments:

I was quite pleased when, few years ago, I acquired this rather smart wooden box. 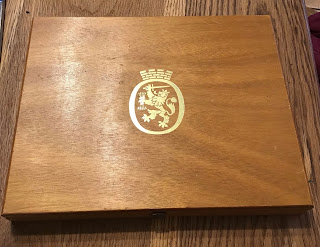 Suitably lined with foam it made a great storage box for my 1/300th scale modern aircraft and safely carried them to numerous Cold War Commanders gatherings throughout the UK. 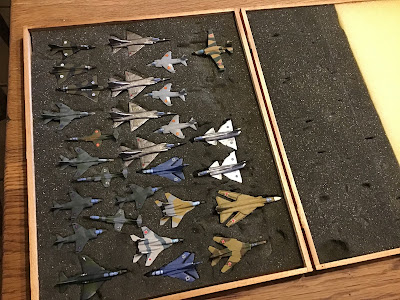 This morning I decided to look out the models I need for a game on Monday evening only to find that the grey foam has "gone off".  It's lost its strength and has stuck to the bottom of the models! 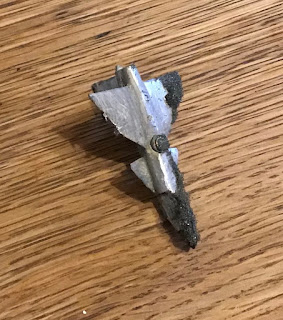 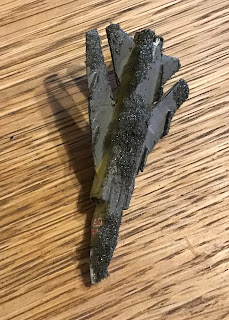 Fortunately it washed off with cold water and I was able to rescue the models without too much damage - just a couple of bombs dislodged from one of the Su-25s.  So, out with the super glue when my fingers have warmed up!

I need to review my storage to see if I've used the same foam anywhere else.  And then I need to think about where to store the aircraft.  They all have magnets on the bottom.  I wonder if Stella would mind me keeping them on the fridge door?