This isn't much of a conversion - in fact all I've done is paint over the blue and white segments (aking them paler blue and yellow respectively) on the Czechoslovak army roundel on this Altaya T-55.  It's now an Andreivian Armenian vehicle.  I'm debating as to whether I should overpaint the white stripes too. 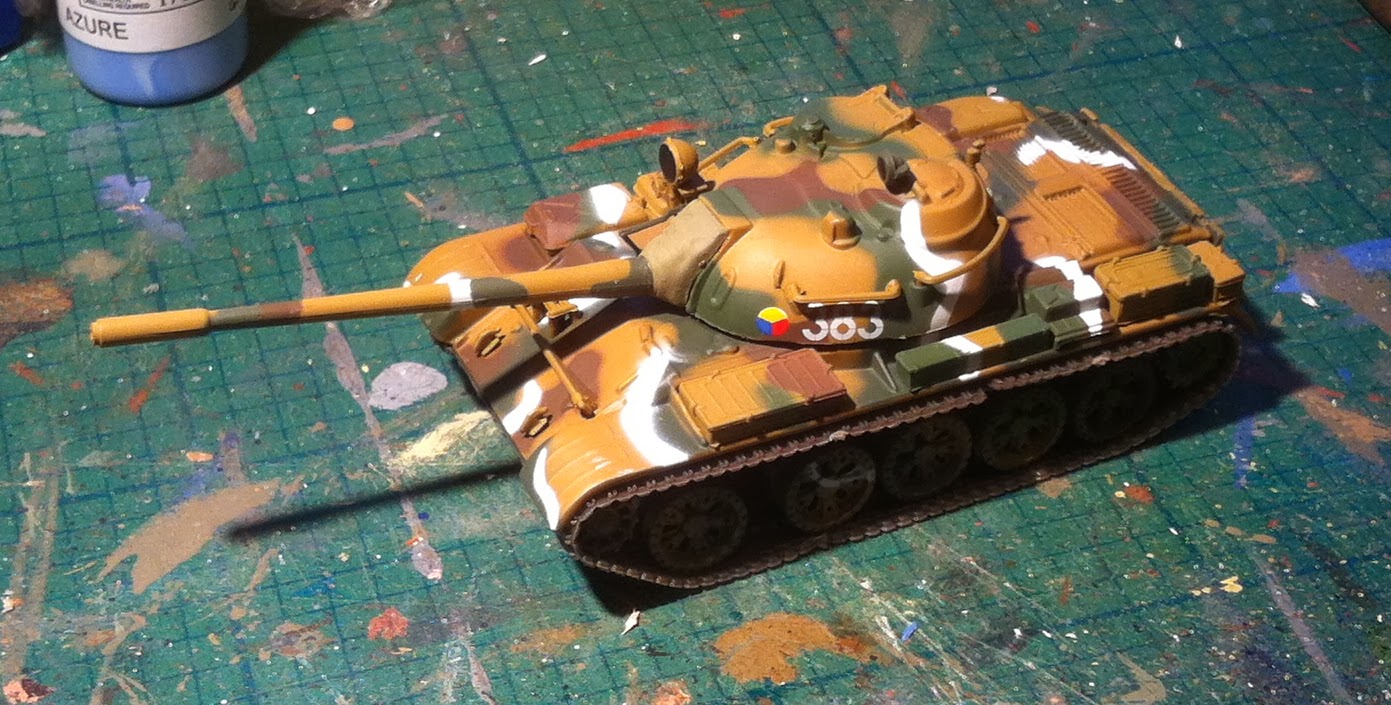 The only slight interest is that this is the first picture taken with my new iPhone.  Or to be precise, the first sharp picture.  I'm just getting the hang of how to avoid camera shake with the phone.
Posted by Counterpane at 12:03 AM 1 comment:

Today we played the Red Counterthrust scenario from the excellent Skirmish Campaigns book Grossdeutschland at Kursk.

I tweaked the scenario to fit the models I had available and we ended up pitting five Panzer III Ausf J, a  Panzer Grenadier squad and a 7,5cm infantry gun (under Jamie's command) against seven T-34s, two SU-76s, and a Soviet motorised infantry squad.

The terrain was rolling countryside with scattered, open woods.

Jamie deployed the whole of his PzIII tank platoon (five vehicles) in a line in the open ground between the central woods and the stream.  I was a bit concerned they were too much in the open (but I needn't have been).


Andy's luck got no better.  Another of his T-34s was immobilised by long-distance fire from the German Panzers, and then the tanks crossing the bridge were targeted. 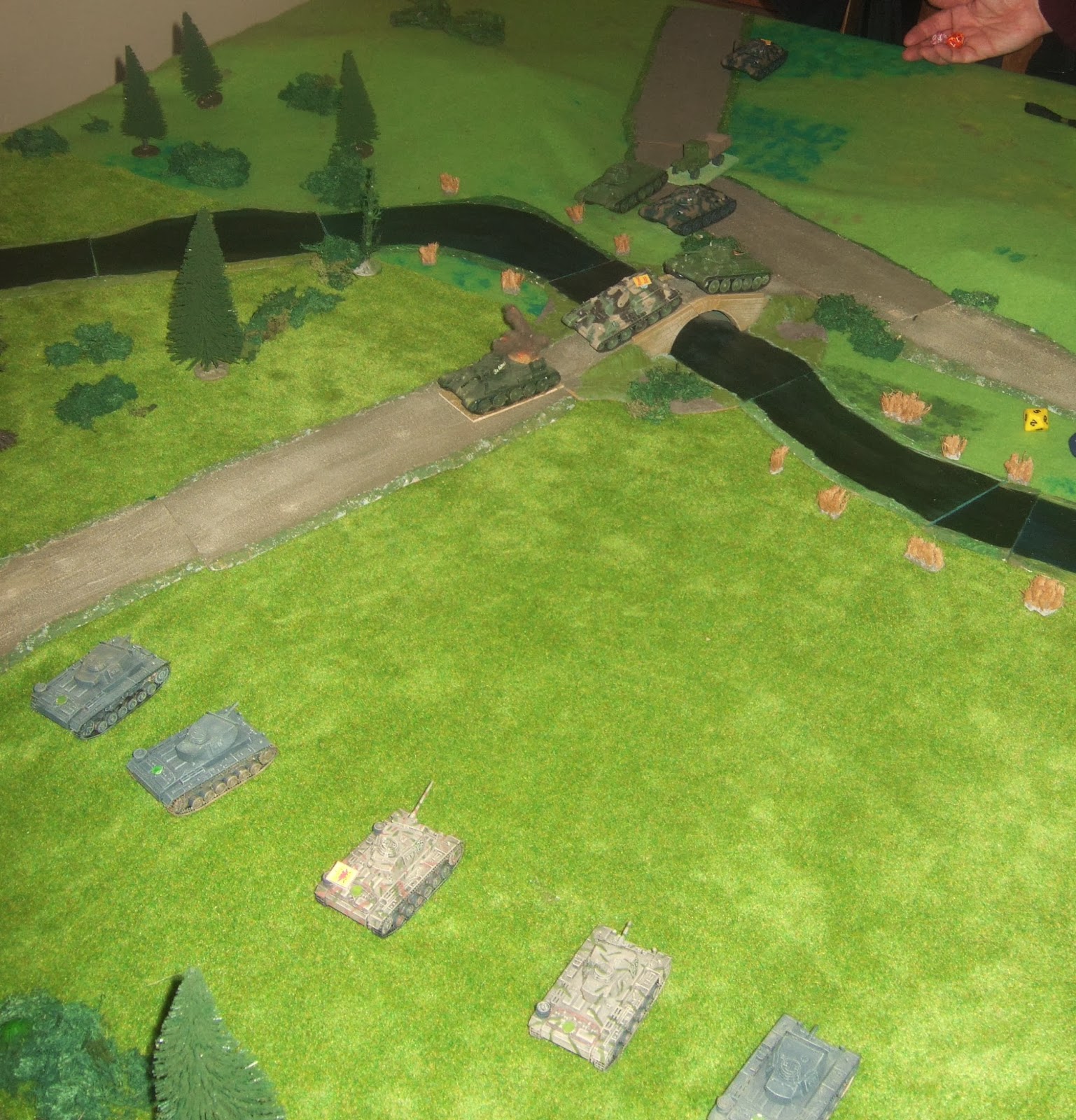 The lead tank was knocked out and the second and third were immobilised with their crews bailing out. This left the bridge blocked and forced the remaining Soviet tank platoon to try and cross the difficult river banks. 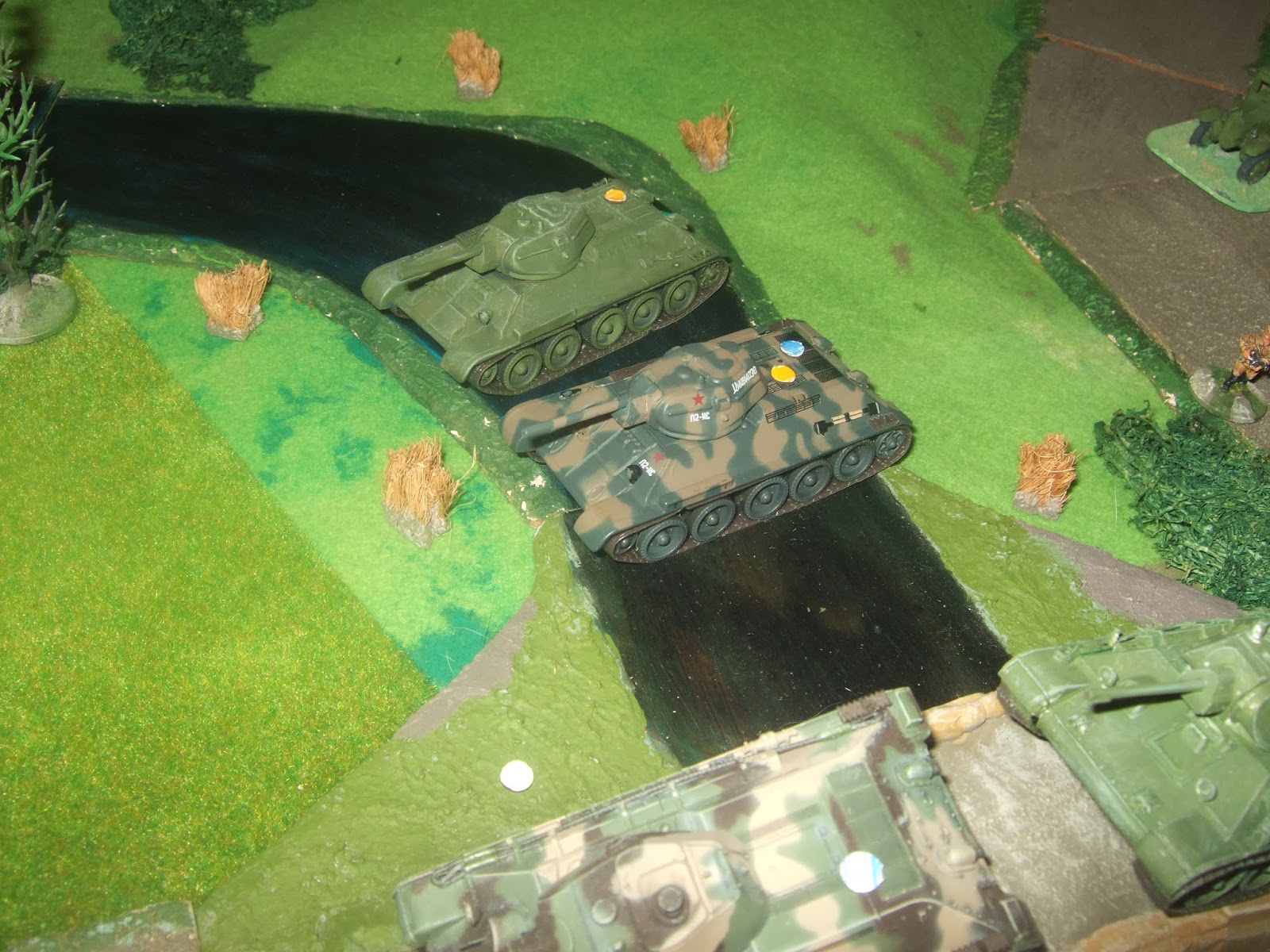 Unfortunately for Andy both would spend some time crossing, and getting stuck in, the unstable banks of the stream. 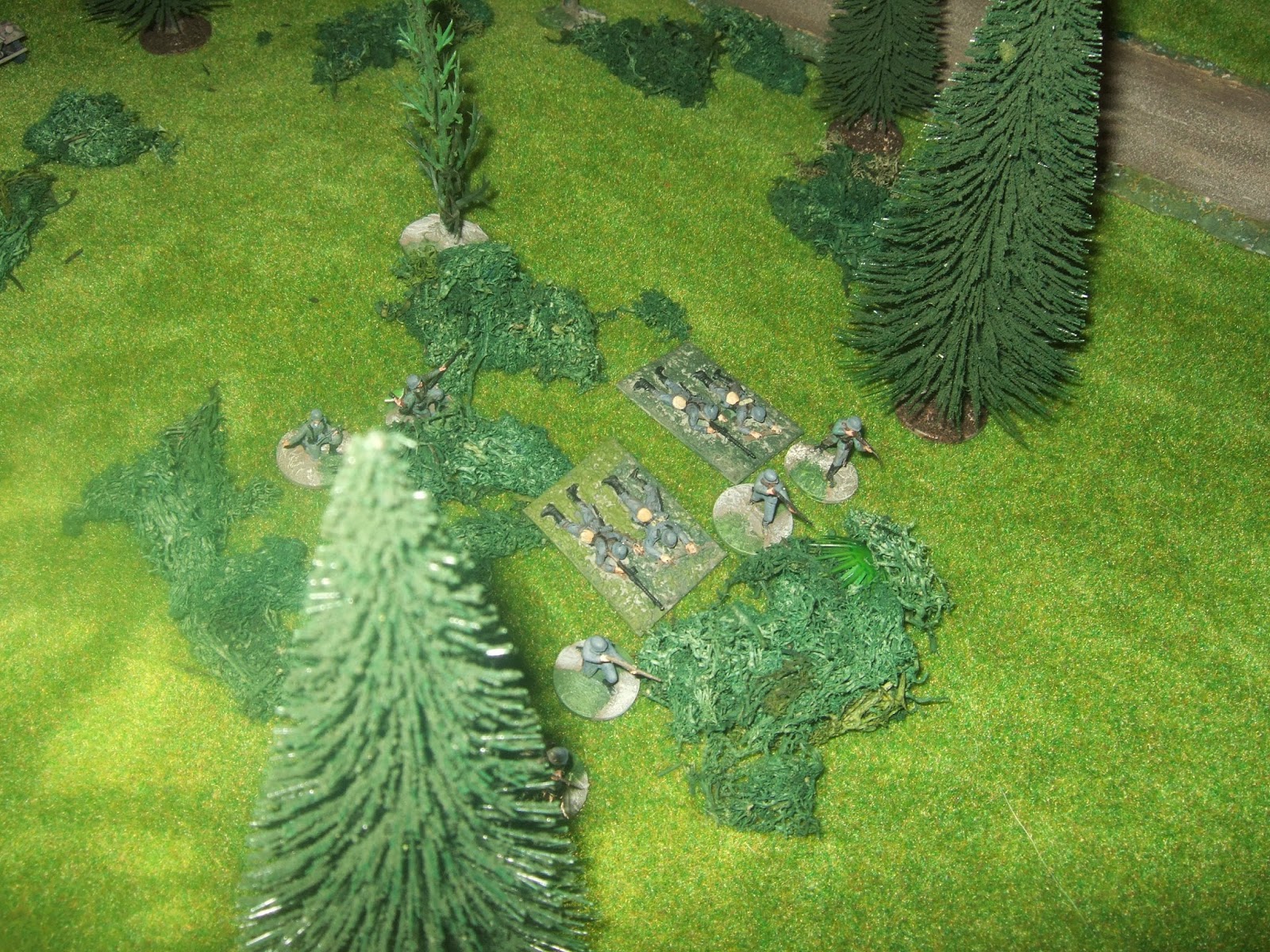 All in all I'm pleased with how the battle went. The rules worked well.  Andy can justifiably feel annoyed that everything that could go wrong did so but I'm pleased that Jamie has managed to play a WW2 game without being trashed.

Posted by Counterpane at 3:24 PM No comments:

Progress on the Andreivian Coaster

I'm making progress in my plan to turn a 1/142nd scale trawler in to a 1/72nd scale trading vessel.

First pic some of the unwanted detail removed, including the winches which left a hole in the deck in front of the superstructure. 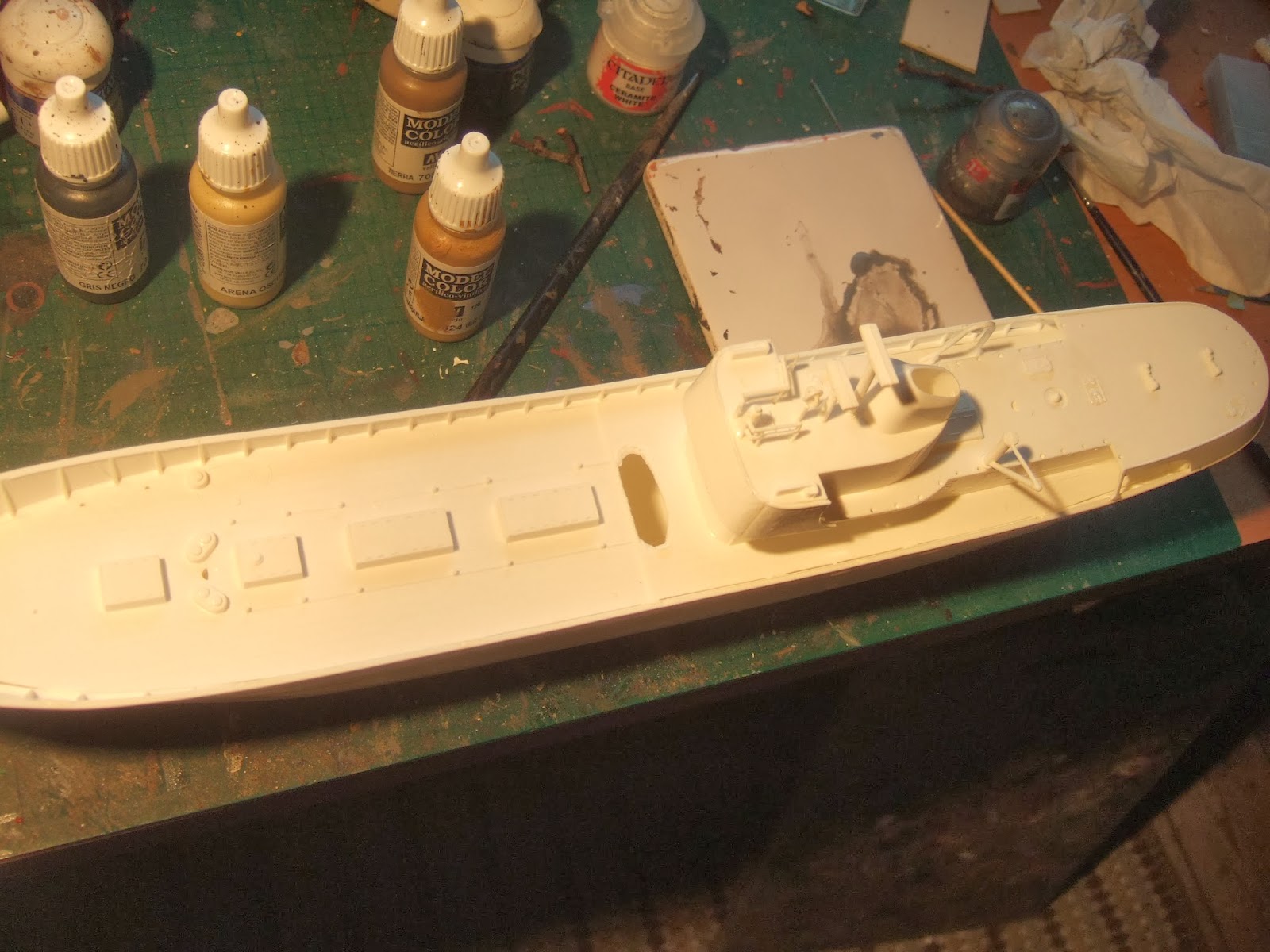 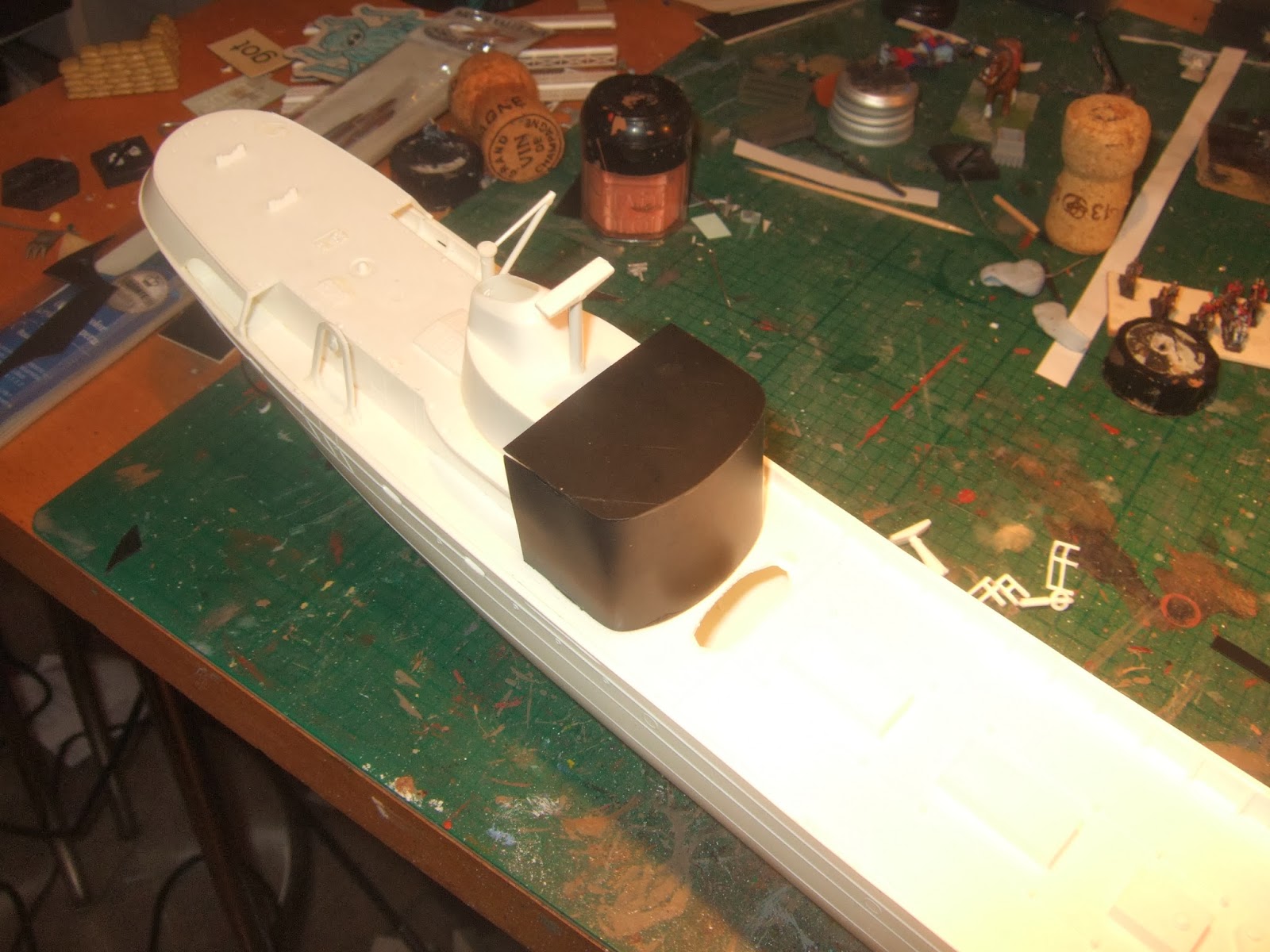 Next job is to add hatch and windows to the new superstructure and build one large hatch-cover on the foredeck.  Oh and to find a suitable ship's boat.

This weekend I finished the Goods Shed I bought at Vapnartak. 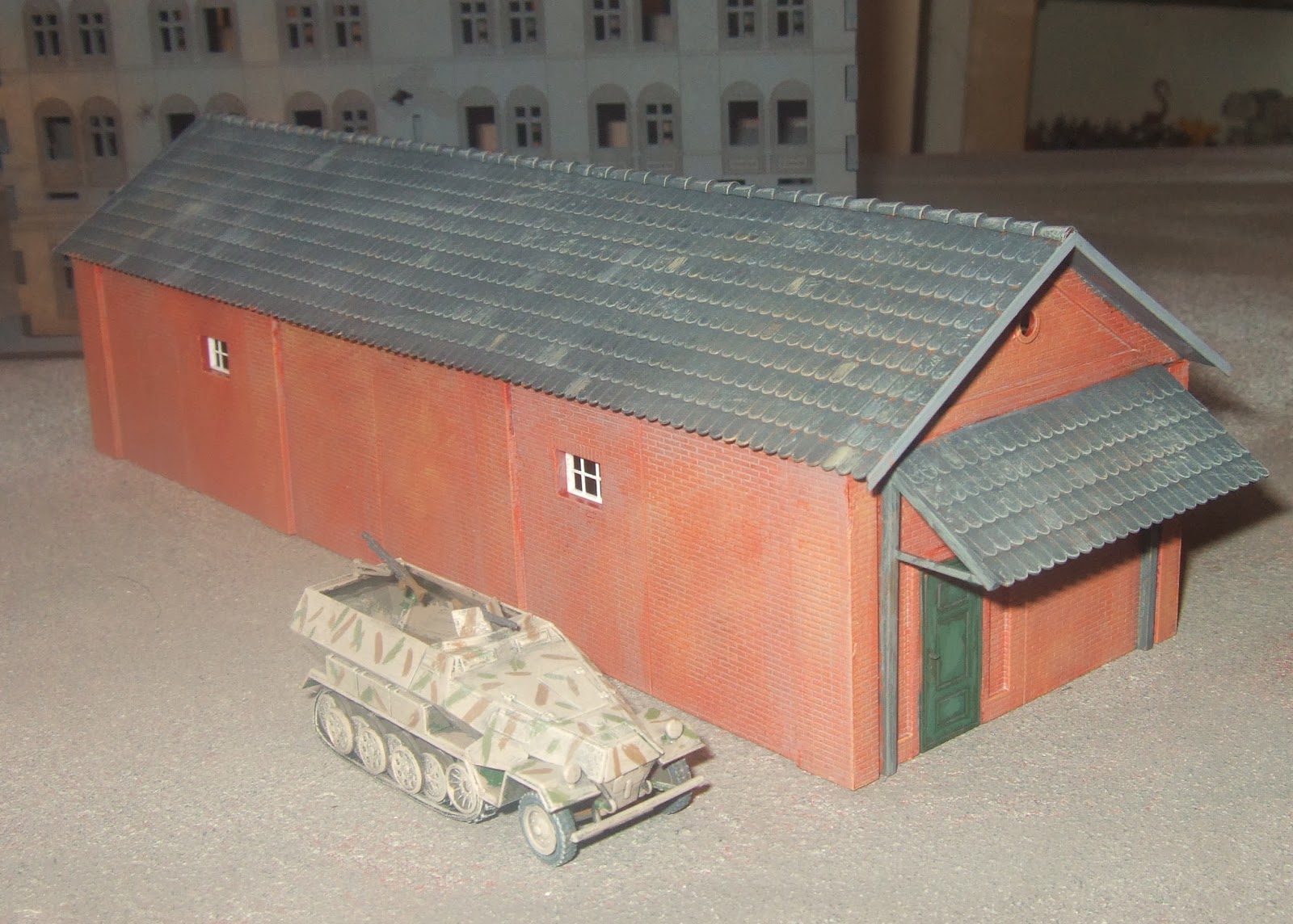 It was reasonably easy to build, the only tricky parts being that some of the side sections needed to be butted together with little support and that the sides lack a positive attachment to the roof.  A little judicious application of superglue fixed that. 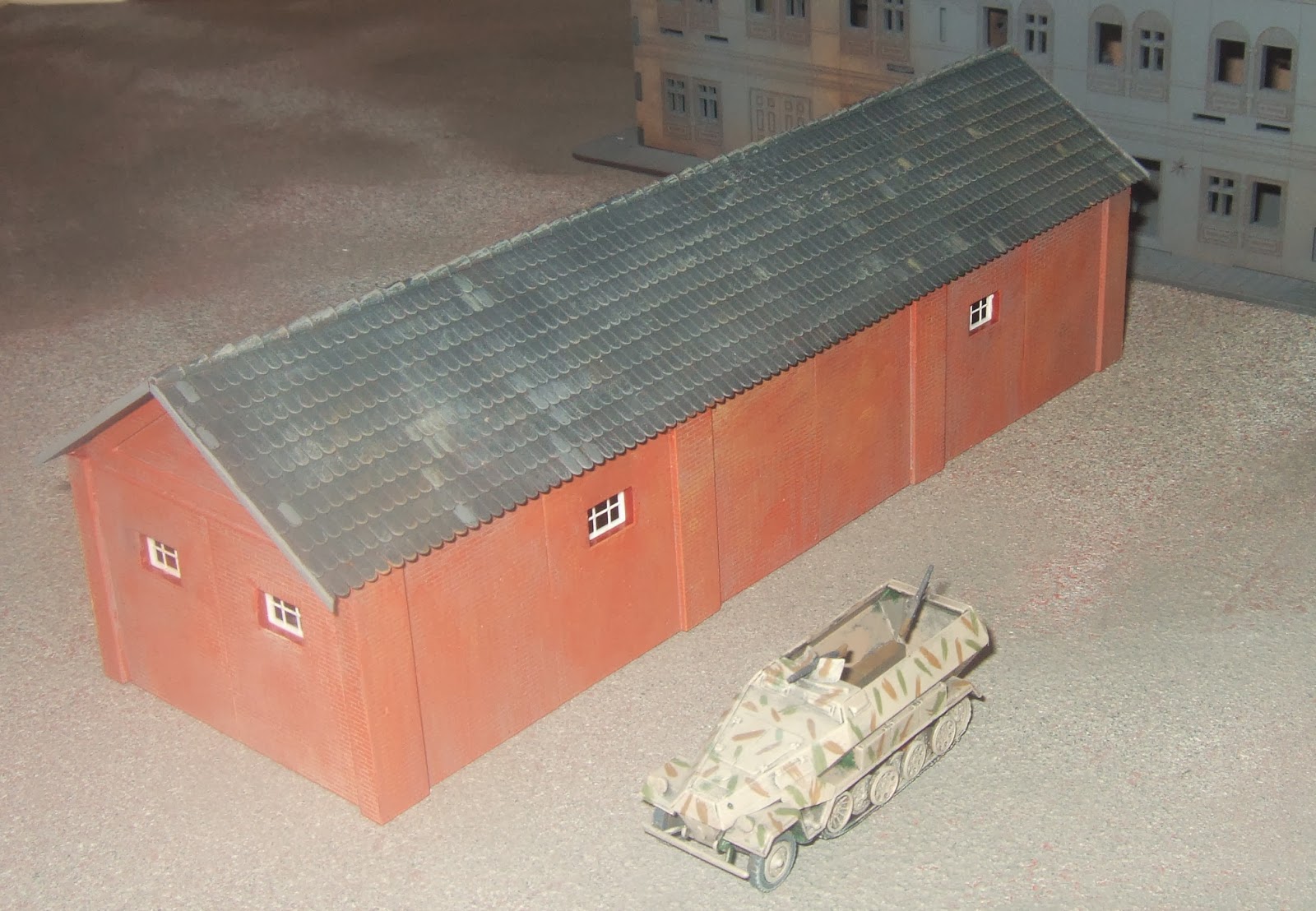 This building will see action somewhere in downtown Tcherbevan but will also be idea if I get round to playing the Berezovka Warehouse scenario from Grossdeutschland At Kursk.

The kit also left me with a few parts left over.  I'll recycle them as details on another building that's currently in development.

A Couple of Panzer IIIs

With a plan to play an Eastern Front game later this month in mind, I decided to spruce up a couple of second-hand Panzer IIIs that had been sitting unfinished in storage. 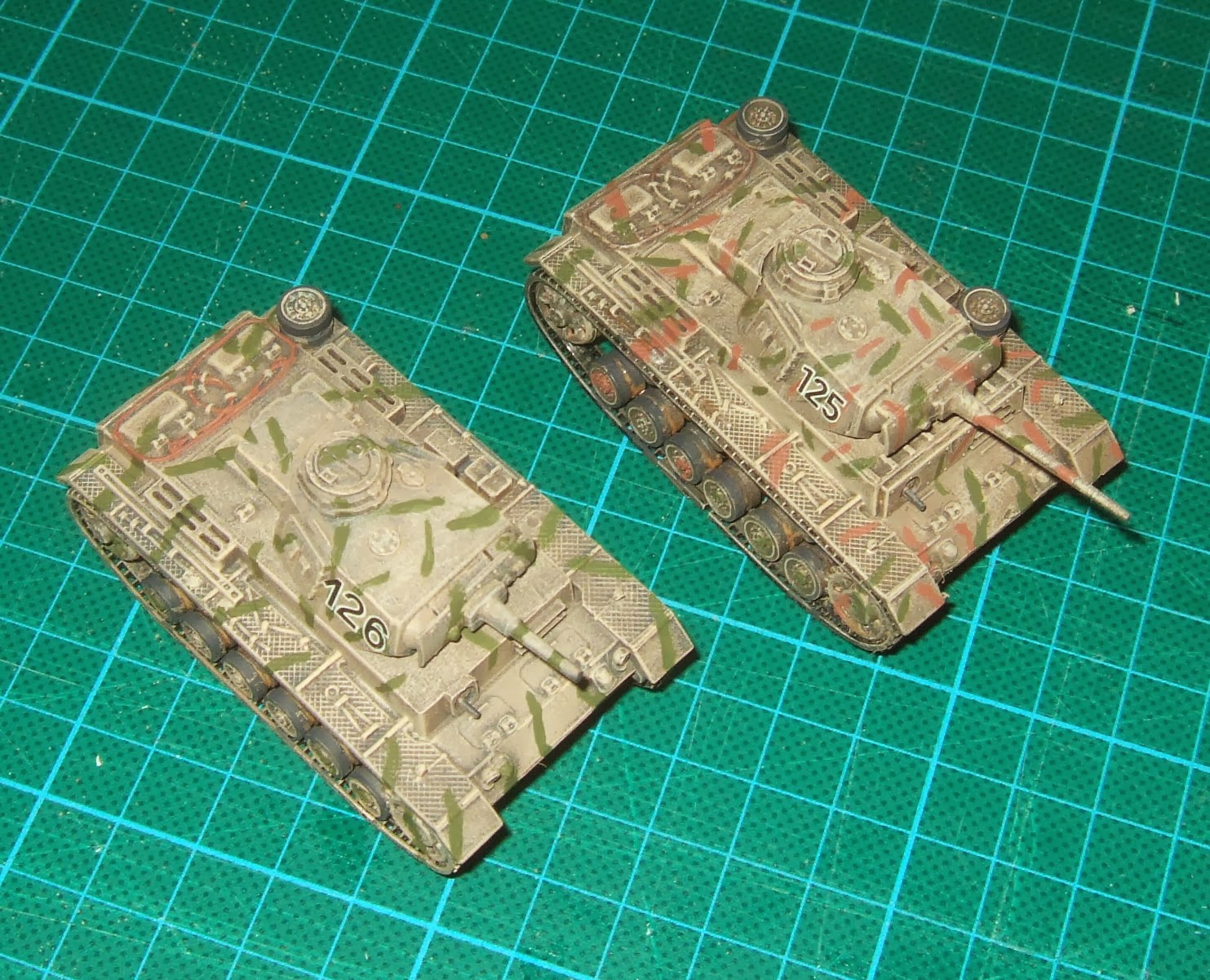 Number 125 is an Ausf L straight out of the (Matchbox) box.  I acquired it some years ago from a friend who, I suspect had built it as a kid.

Number 126 is a conversion of the Matchbox kit to an earlier model (Ausf F?) with shorter 50mm gun and without the additional armour on the mantlet.  It was part of a batch I picked up from a bring and buy somewhere.

My recipe for late war German Dunkelgelb came from a helpful posting (by Piers Brand I think) on The Guild.  The base coat is GW Charadon Granite.  The vehicle then gets a semi-drybrush of GW Khemri Brown and then several heavy drybrush coats of Vallejo Iraqi Sand.  My chosen colours for the green and red-brown camo are Vallejo Reflective Green and Saddle Brown respectively.
Posted by Counterpane at 9:37 AM 1 comment:

My mate Mark Preston has presented me with this half-completed model of a North Sea trawler (Revell, 1:142 scale).  Thanks Mark! 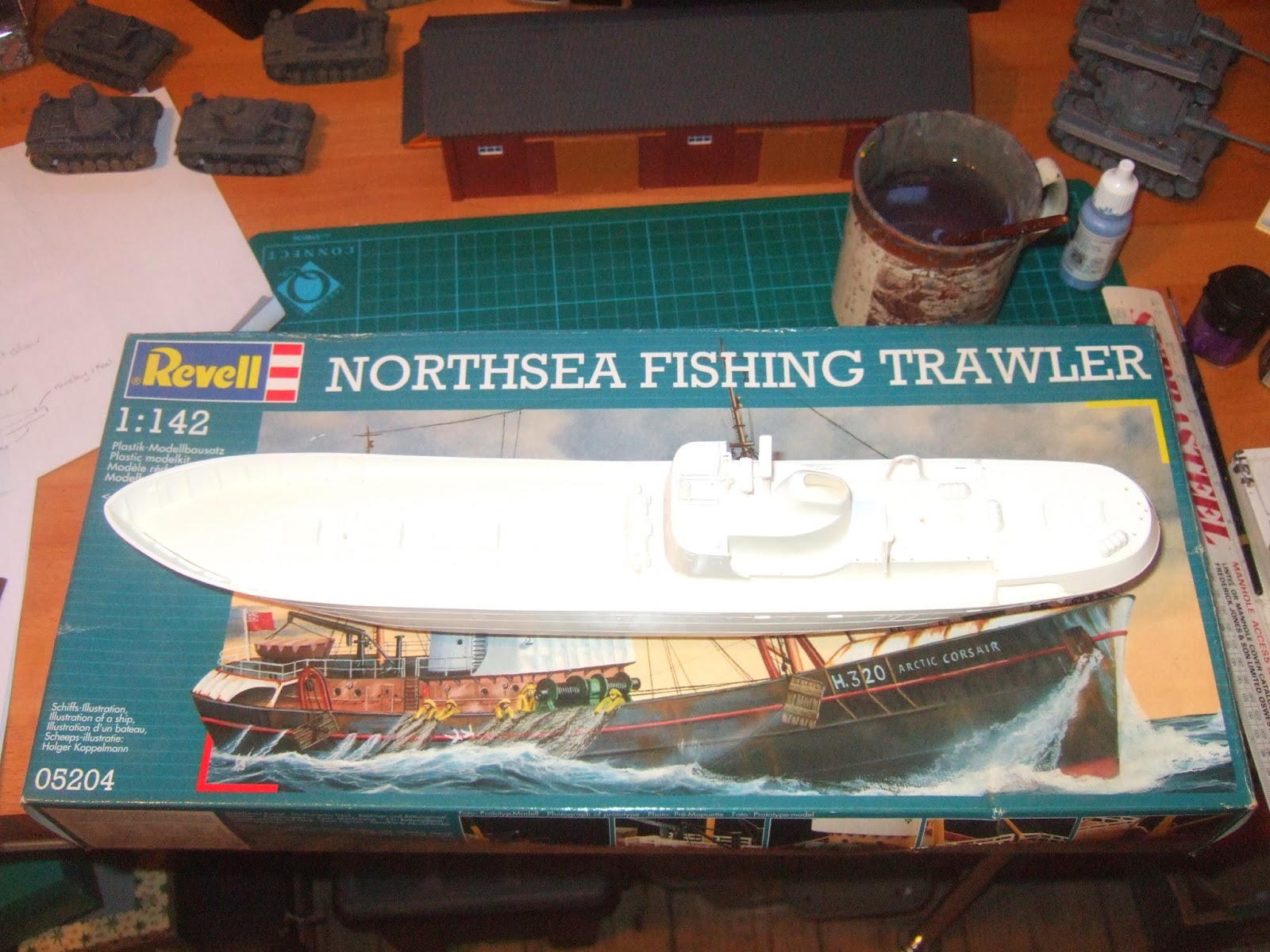 I reckon with a little modification to the deck hatches and superstructure I might be able to convert it into a small coaster in approximate 1:72 scale.  Just the thing to grace the River Krupnehr in Andreivia. 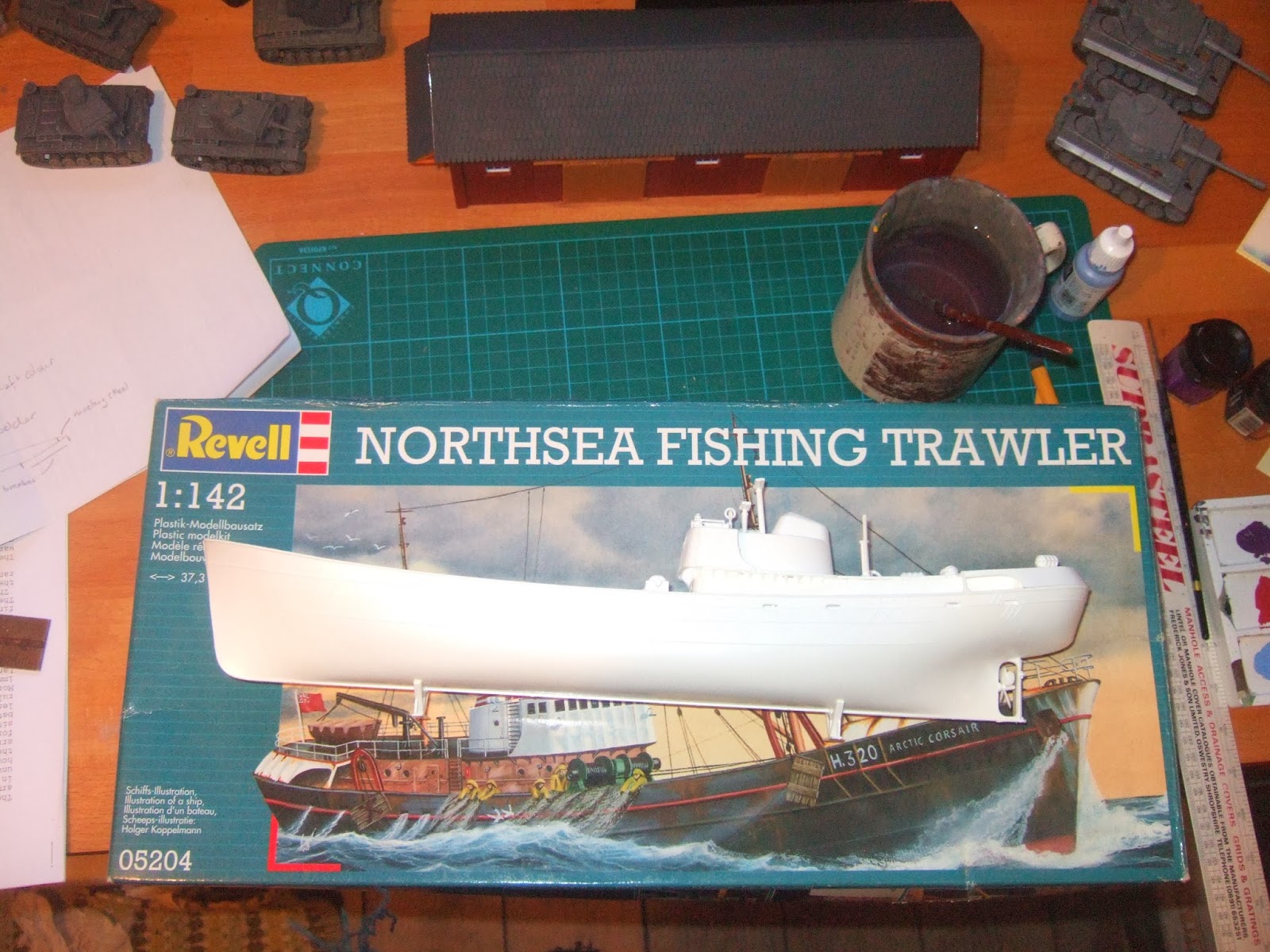 The strange bag of parts I bought at Vapnartak now has an identification thanks to the marvellous (but at time of writing strangely-unwilling-to-load) Plastic Soldier Review website. 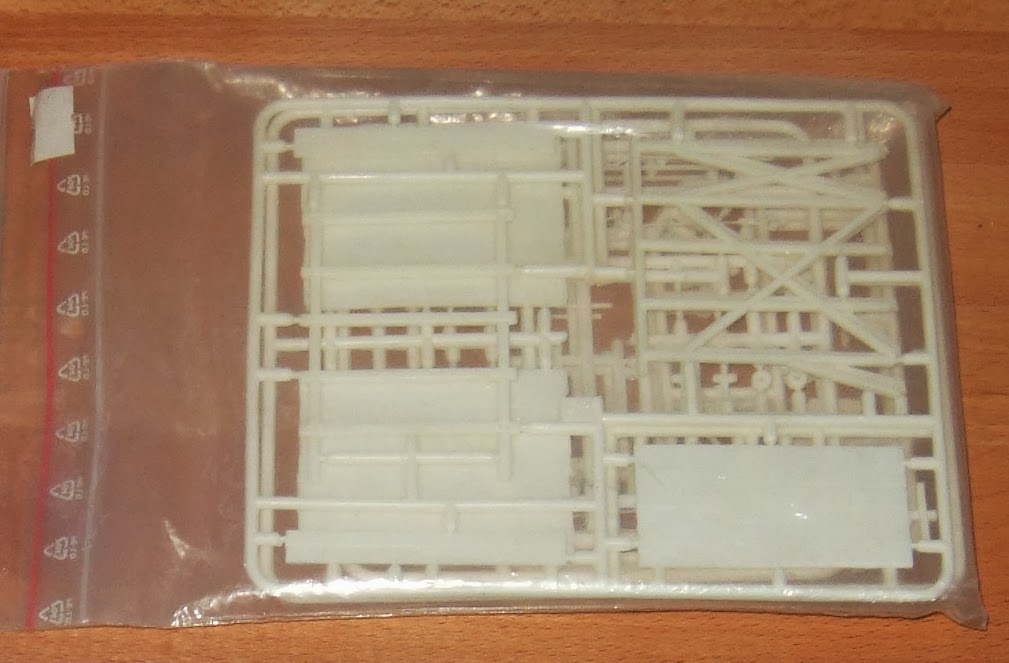 It turns out to be the contents of the first Orion Medieval Siege Engines box- one ram in a protective mantlet and a couple of "einarms" (some kind of stone-throwing engine).

So not much use to me.  Anyone want to make me an offer?
Posted by Counterpane at 3:25 AM 1 comment:

Some time ago I acquired from a friend a half-built Airfix SAM-2 Guideline missile kit. The missile and launcher trailer I completed some time ago and they appeared in the Spetsnaz at Tcherbevan game. Now I've put together the ZIL-157 tractor-trailer unit and painted and based the bogie wheels from the launch trailer. 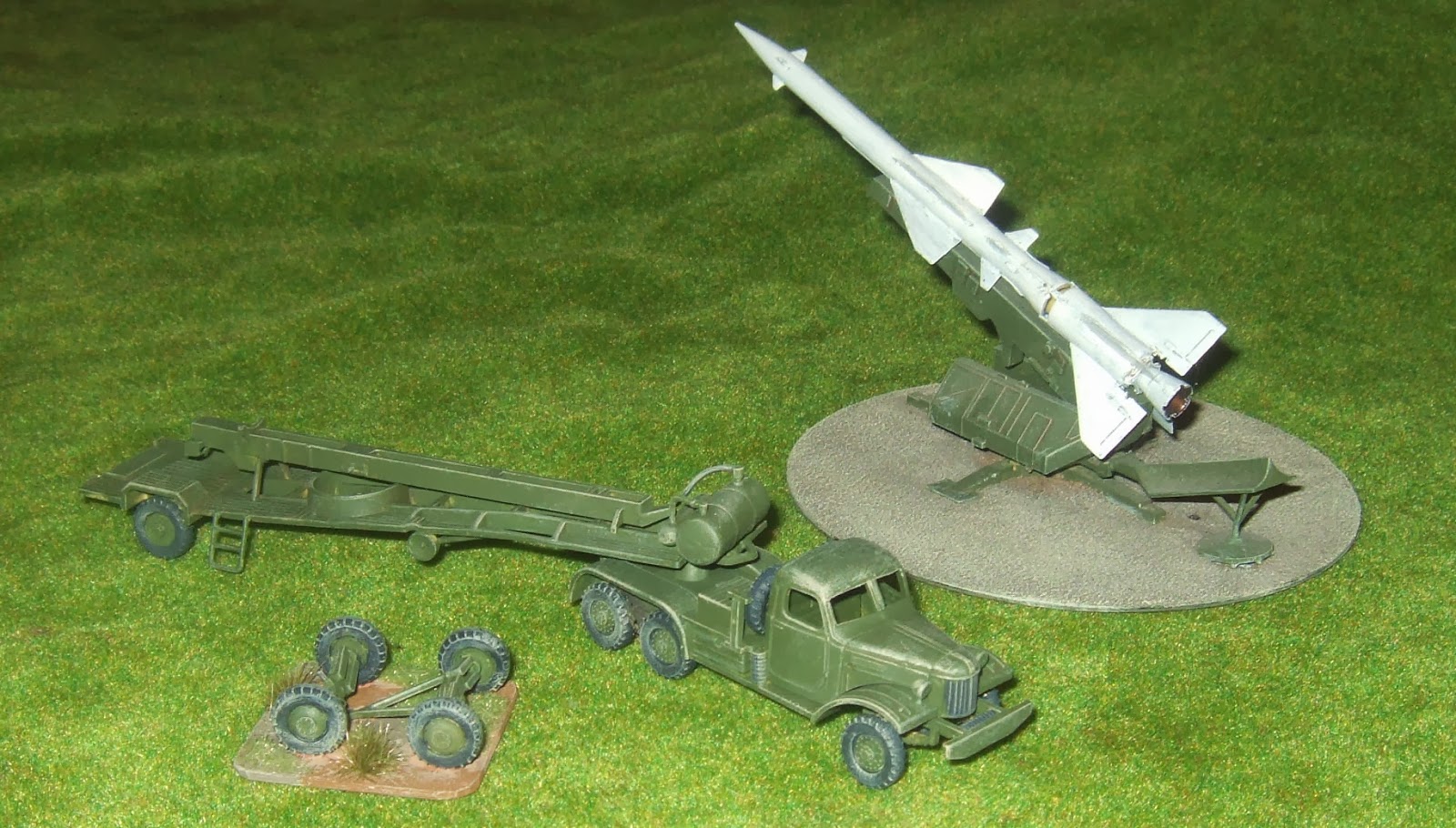 This is the only one of these I'm ever likely to own as the original moulds have apparently been lost so this kit is something of a collector's item. A few parts were missing but I've managed to put together enough to make a reasonable model. 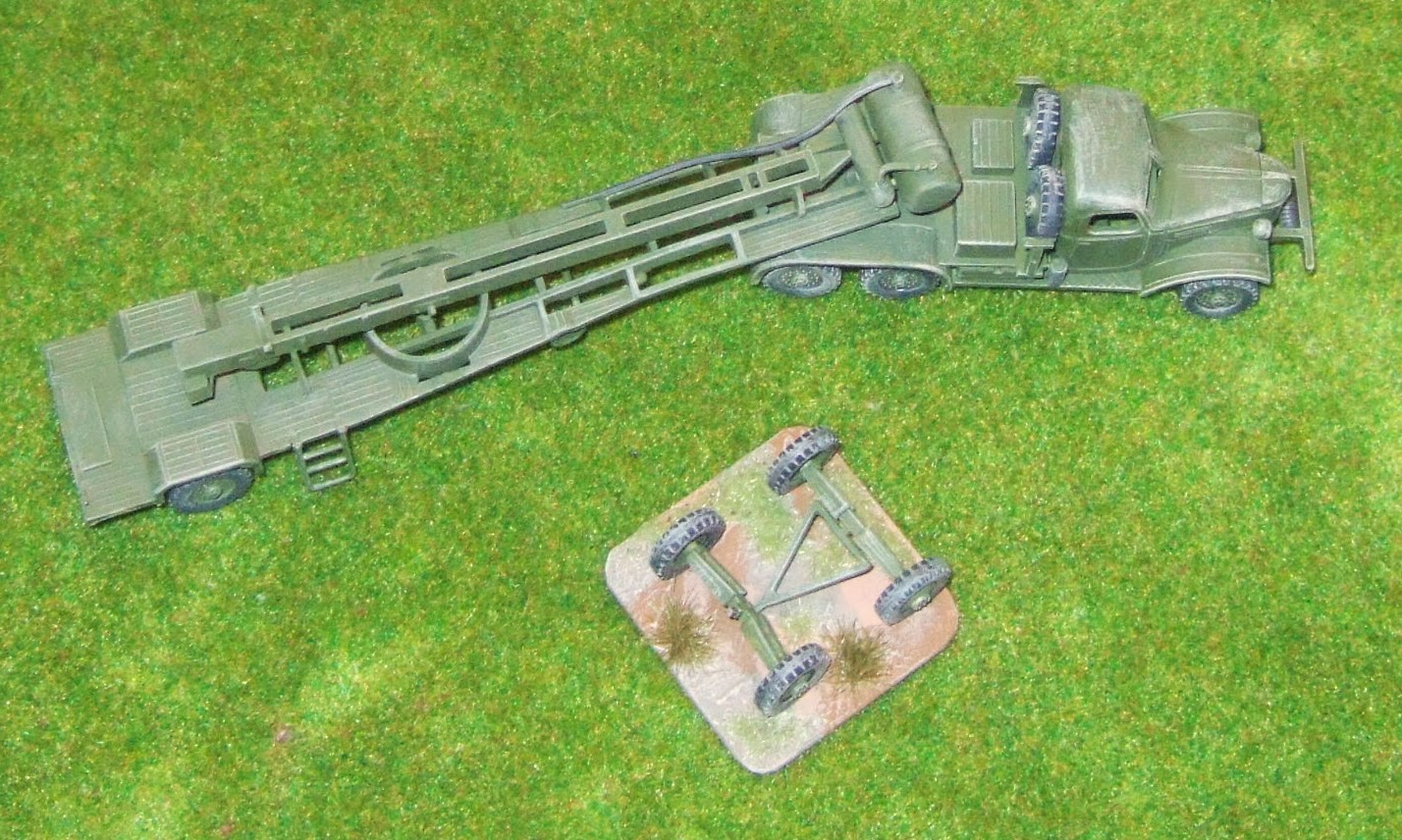 It's painted in Vallejo Reflective Green, my usual colour for Soviet kit.  I've dry-brushed Grey-Green and Iraqi Sand over the top. 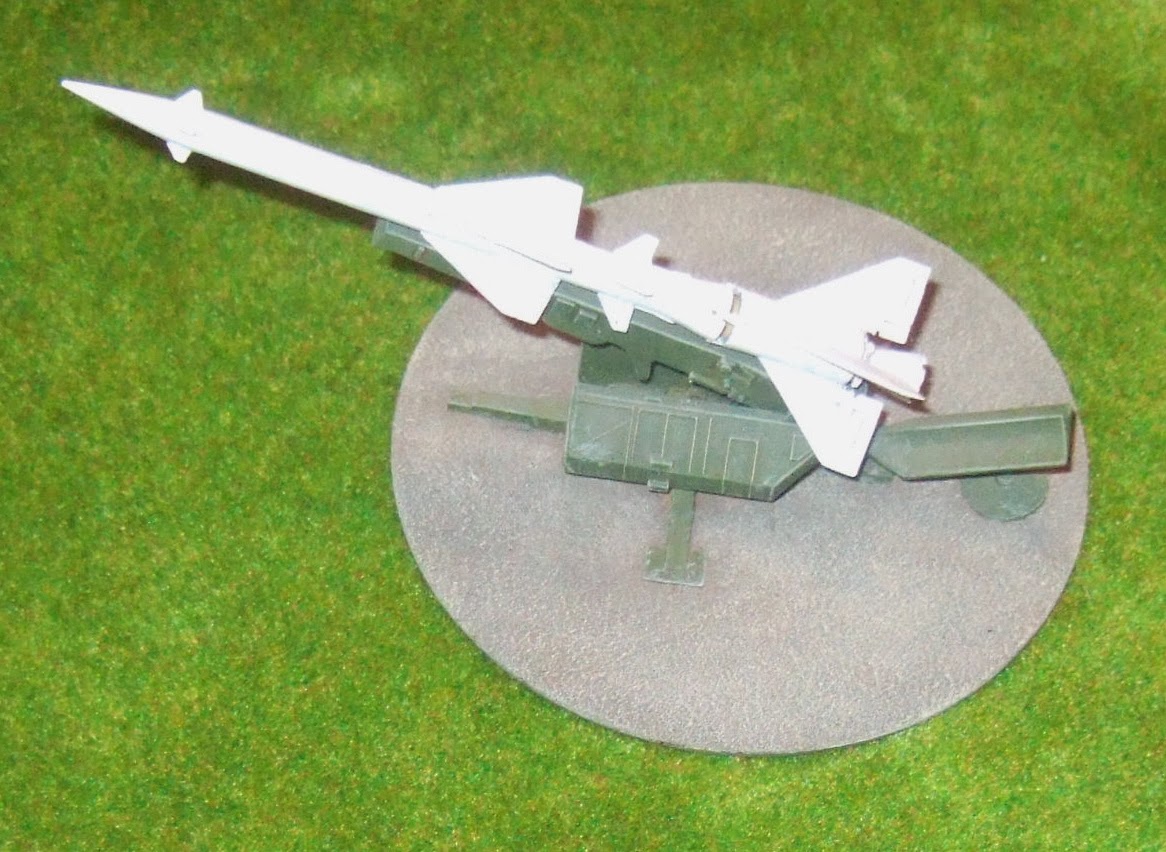 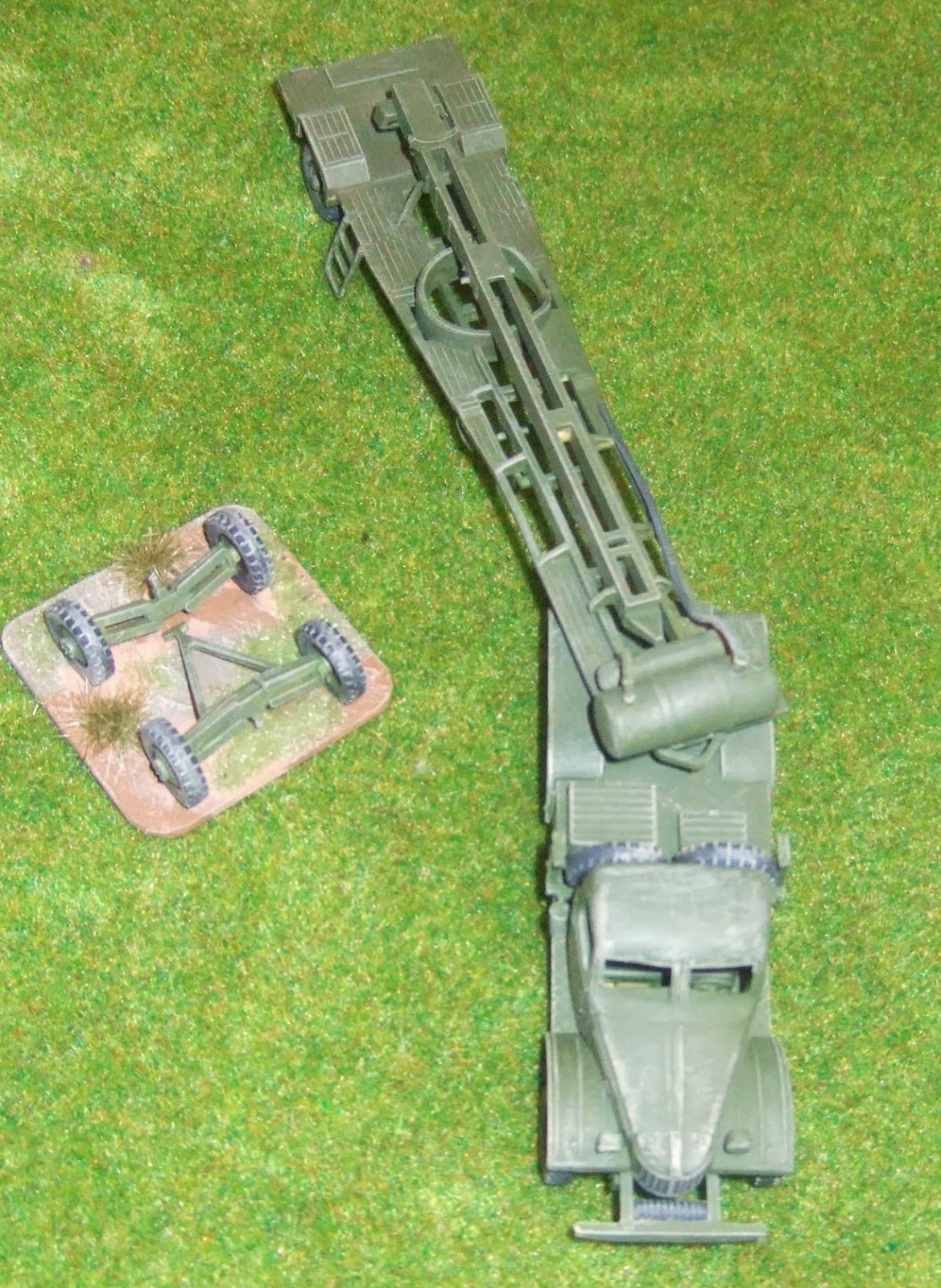 Posted by Counterpane at 2:02 PM 4 comments:

We went up to York today with Jamie and I going to Vapnartak whilst the rest of the family had a stroll around the city centre.

Vapnartak is a shopping-oriented show but I did manage to get a picture of this rather silly but well-modelled 28mm scale Battle of Trafalgar Square 1984 by the Border Reivers club. 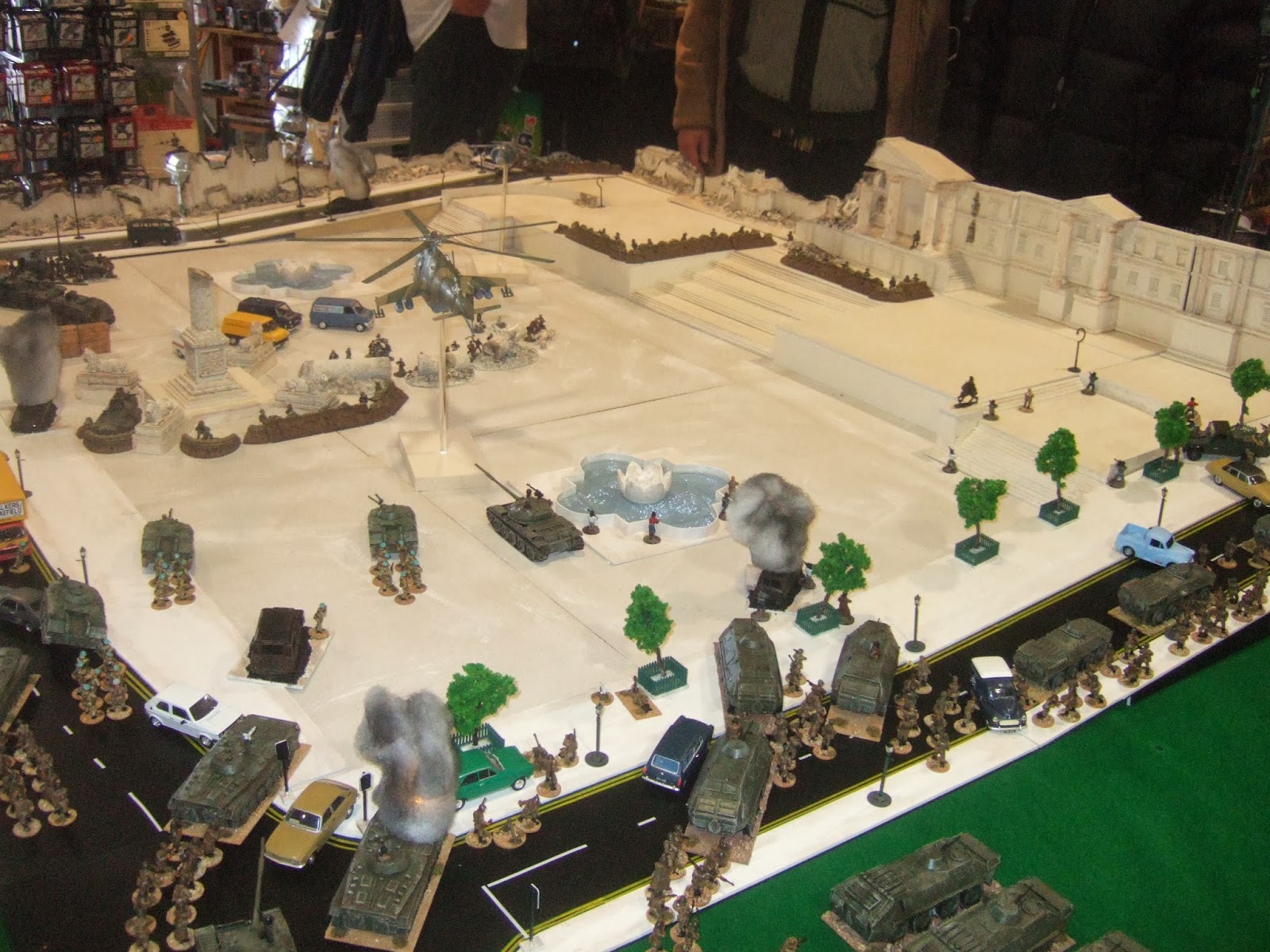 I didn't buy much but what I did buy illustrates my complete inability to focus: 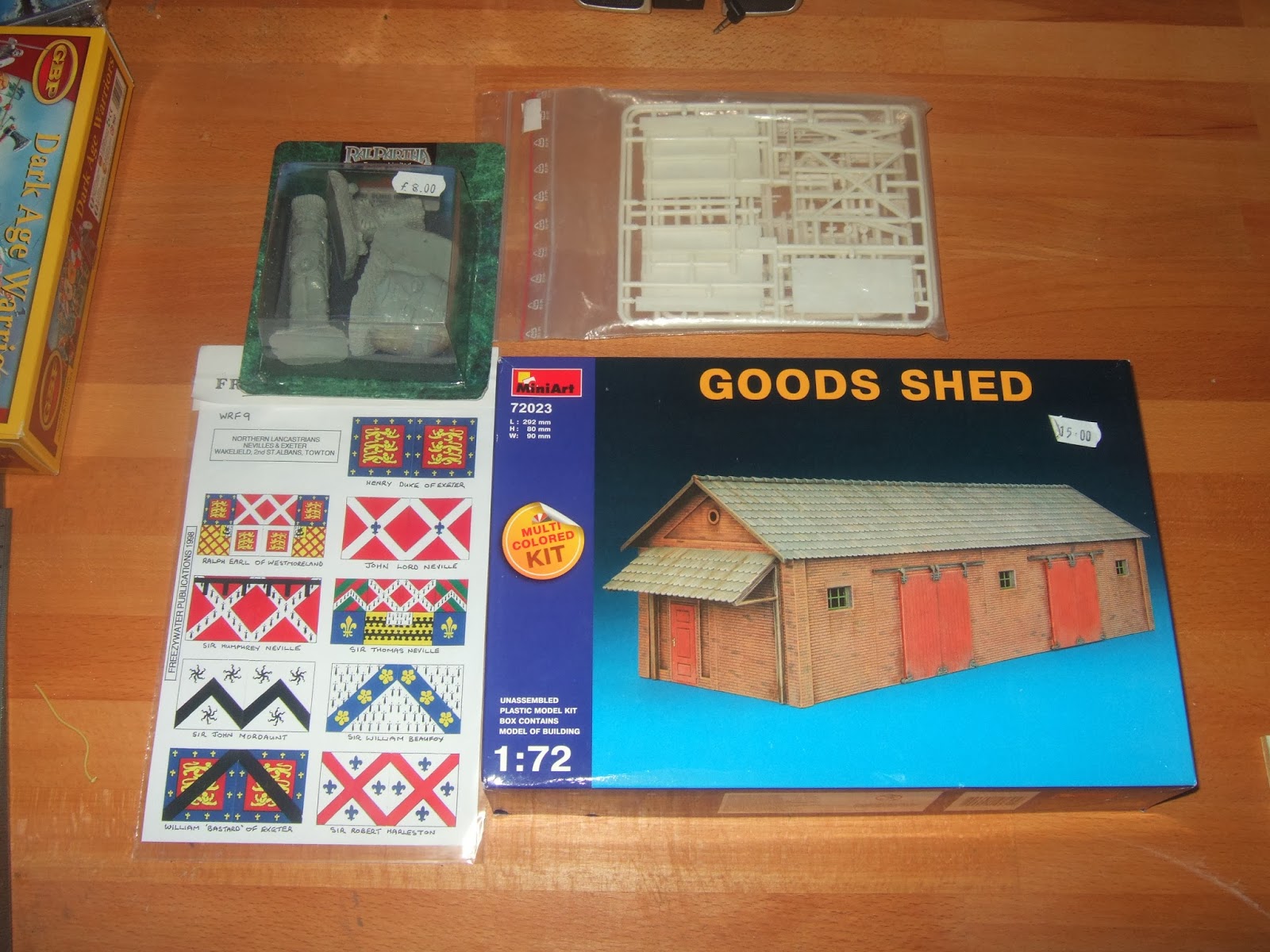 Top left is a blister pack of four Olmec statues from Ral Partha Europe.  My Pulp Alley collection is heading towards a Mexican setting so these may be useful.

Bottom left are some Wars of the Roses banners from Freezywater Productions.  Henry Holland, duke of Exeter is in there and his retinue is my next unit in the project to focus on the Barnet-Tewkesbury campaign.

Bottom right is a 1/72nd scale plastic kit of a goods shed that should be useful for Tcherbevan.

Top right is something I bought from those nice guys at Grubby Tanks.  It was unmarked in their rummage box and they thought it was a gallows which I thought might have Andreivian or Pulpish uses.  On further inspection I suspect it may be some kind of medieval siege engine.  Further examination is called for.

Posted by Counterpane at 2:40 PM 4 comments:

After about seven years of struggling with a "broadband" internet connection that rarely made it to 1Mbps we've now got a 4G wireless system from Everything Everywhere that is getting us 20Mbps download and 10Mbps upload!

By way of celebration, here's a (rapidly uploaded) random photograph: 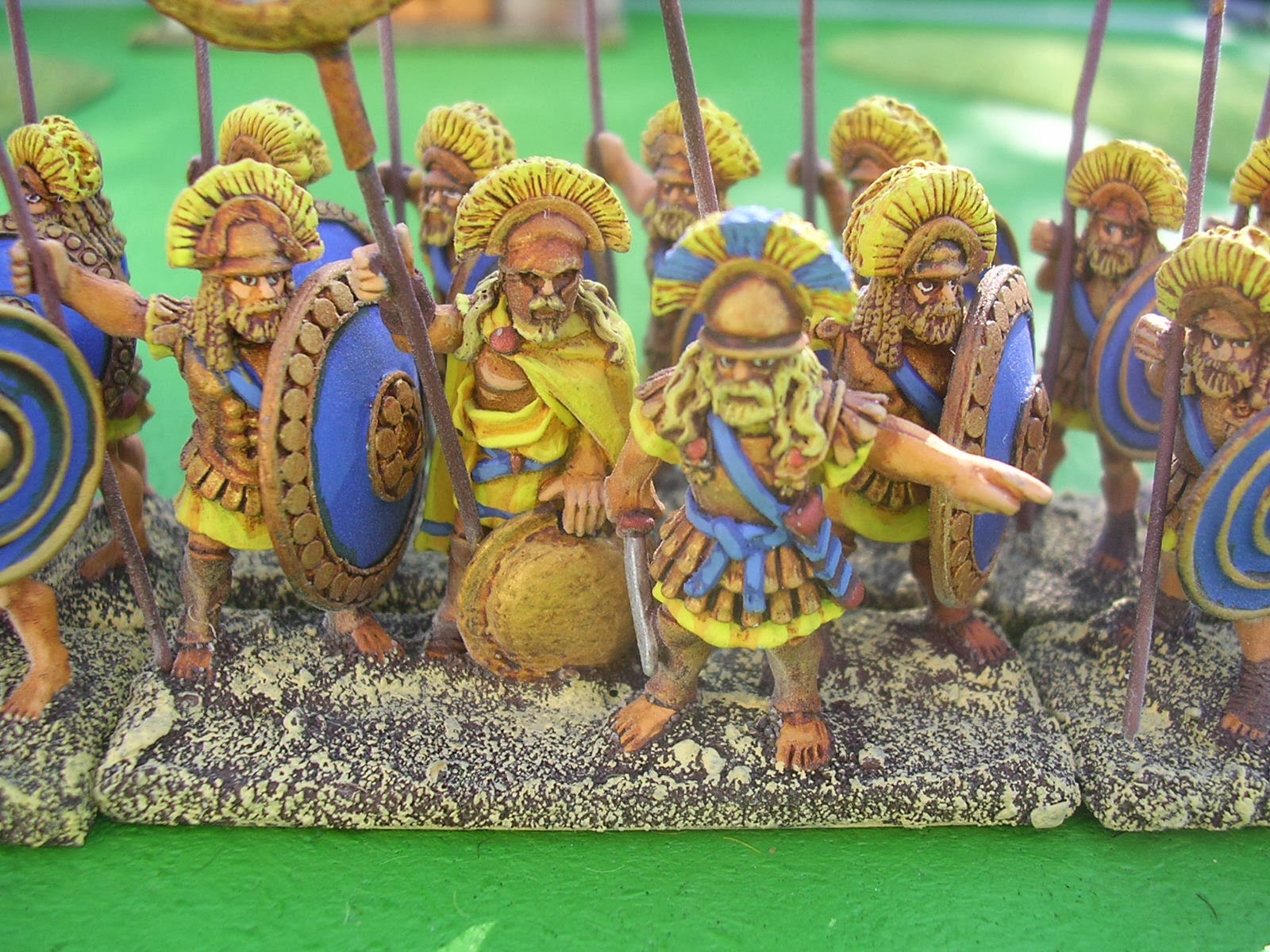 It's the command element from Gregory Privat's Sun Dome Templars, photographed at a Glory Geeks event a few years ago.
Posted by Counterpane at 12:48 PM 1 comment: