Among the events happening during the course of the Crisis Point Woebetides campaign will be the need to explore the islands searching for clues to solve an on-going mystery. To support this, I've started to build Plot Point markers (inspired by a mechanism in Pulp Alley).

The latest is this skeleton propped up in the corner of an old ruin somewhere in the interior. 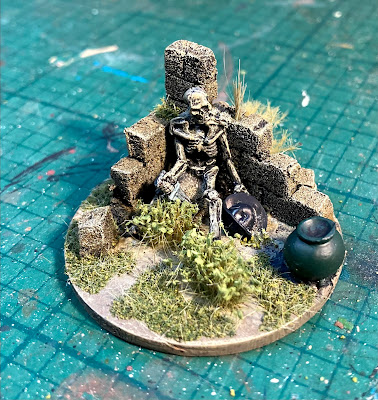 The skeleton itself is from a box that my son Charlie bought years ago but never did anything with. It took a bit of hacking and bending to get it off its original base and into a suitably slumped position but I think it works. I've added a hat from the Warlord plastic War of the Spanish Succession infantry box and a jar from the Wargames Foundry African village accessories. The wall is from foamcore with the paper layers removed and stonework carved in.

Next up we have a magazine from the French fort under construction on Petit Woebetide. 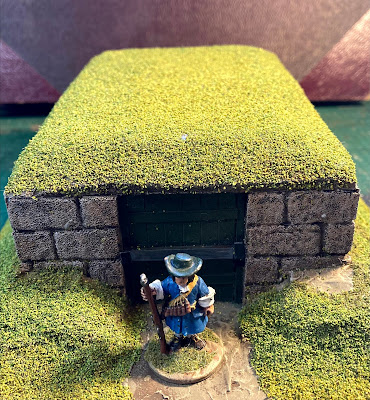 Like the docks seen here previously, the main structure is from Firedragon Games stamped XPS foam on a PVC board base. The earth banks surrounding the structure are from layers of foamcore with my usual Tetrion coating.Door frame and door from thin card and MDF off-cuts. 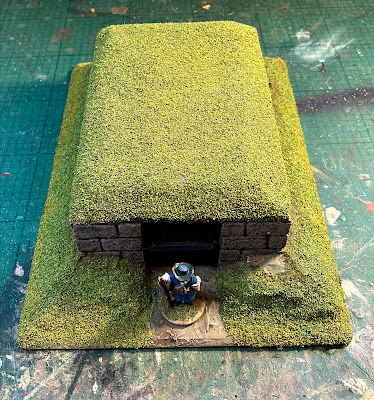 Finally we have this cave entrance. I think it may have appeared here before but it now has the back blocked up with black card and looks a whole lot better in a decent photograph. 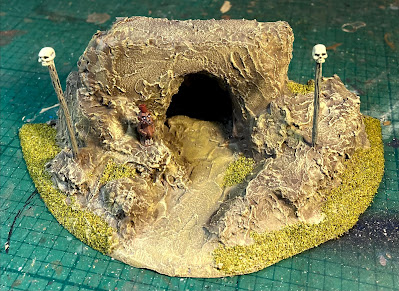 Posted by Counterpane at 4:45 AM 2 comments: