I couldn't get to The Other Partizan this weekend as I was required for DIY duties.  However, gaming mate Tom managed attend and has kindly picked up a couple of packs of Foundry 28mm Mexican infantry for me. 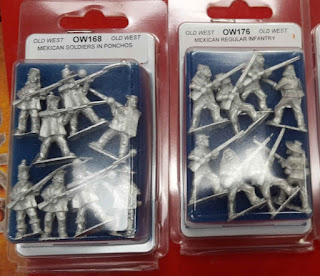 This will give me another two groups for my developing Liberal army and neatly saves me a few quid on postage (and the packs are cheaper at shows than they are mail order).  Thanks Tom!

I'm tempted to paint these guys in red jackets as state militia.  That'll mean I can field a mix of smoothbore and rifled muskets in my force.  I'll also have a red-and-white-uniformed soldiers on both sides.  Plenty of scope for in-game confusion!

Posted by Counterpane at 4:11 AM 2 comments:

Last night I finished a small built-up area that may see use in next year's Cold War Commanders' Normandy games. 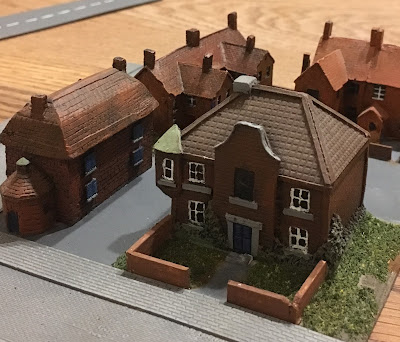 The buildings are mostly resin but I'm not sure by which manufacturers.  The exception is the building with the blue shutters.  That's a white metal model by Irregular. 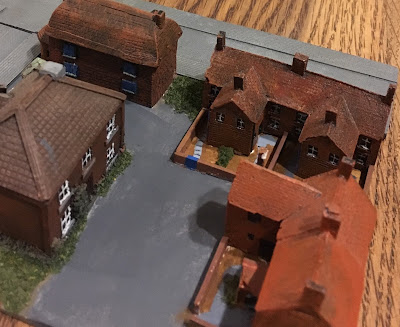 Walls are simply strips of cardboard.
Posted by Counterpane at 5:32 AM 6 comments:

On the workbench - Mexican Cavalry

My Maximilian Adventure project continues to advance.  Currently in production is a group of Republican/Liberal regular cavalry: 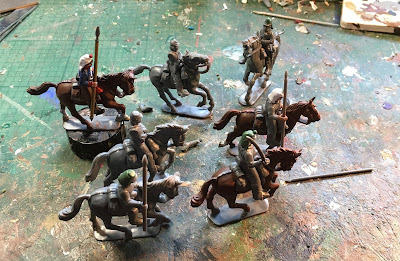 They are pretty simply converted from Perry plastic ACW cavalry.  They require the kepi building up higher and the addition of a cloth cover with a neck curtain.  Both are from Green Stuff.

Mexican cavalry at the time seem to have been mostly lance-armed.  I'm using all three standard poles from the Perry box but I've also added a spear (and hand) from one of the Gripping Beast Dark Age Warriors boxes.  I like the way you can mix and match bits from other boxes of plastic figures.

Although there are only seven shown in the photo above, I'm actually making nine; a standard Sharp Practice unit of eight plus an extra figure to act as Leader.  This is a lot of 28mm figures to paint in one go and you'll see that in an effort to retain my sanity I've got a mixture with some still to be converted whilst others are nearly completely painted.
Posted by Counterpane at 12:31 AM No comments: