Back to Future War Commander

It looks like we've had enough of Lion Rampant for a bit - one of my players finds the activation system particularly frustrating.  I've been casting around for other games to play virtually.  I've rejected Maurice (not well adapted to multiplayer and too difficult to keep track of who's holding what card) Dux Britanniarum and Pulp Alley (also card driven). Infamy Infamy is coming soon but I'll not be ready to run it straight away.
I've had a (very) few 6mm sci-fi models in my collection for years and I only played Future War Commander a couple of times. I have an idea for a ladder campaign so I thought I'd dust off the rules and have a play, solo, to refamiliarise myself with them. 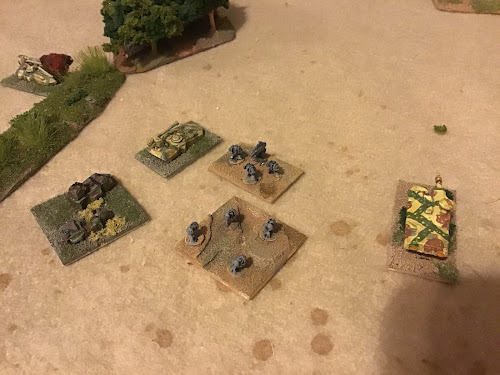 Here we see some mercenary forces in action against government troops on the planet Pyncharn.
The rules are sufficiently similar to Cold War Commander that it wasn't too much of a struggle to get the hang of them. As with CWC they can bog down into a static firefight but, experience shows, it's the side that manoeuvres successfully that wins in those circumstances. 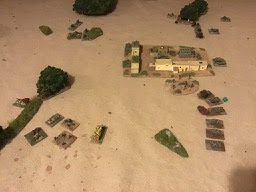 In this case the mercenaries managed to get round onto the flanks of the government forces and force them to retreat.
I'll run a test game with my four players next and see how that goes before committing to the campaign idea.
Posted by Counterpane at 3:23 AM 8 comments:

Saturday saw the first Virtual Lardy Day organised by Jeremy from Bury.
Eight Too Fat Lardies games happened - Chain of Command, Sharp Practice and the new Infamy Infamy all saw action. The games tables were in two countries (the UK and Germany) and there were players, to my knowledge, from another three (Canada, the USA, and South Africa). 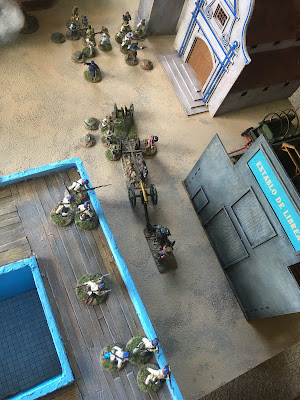 I ran two games of Cortina at Matamoros - a broadly historical scenario based on events in the northeast of Mexico in April 1865. It's a very small game by usual Sharp Practice standards - only less than forty figures were deployed between the two forces. However, it worked pretty well; not as prone to finishing early as I feared.
We played using an audio-visual channel on the Discord server set up by Jeremy. I was very pleased with how this worked and I think I might try using it for my own regular games.
I was busy running the games, though, so I didn't take an appreciable number of photos. What I did do I'll show here. 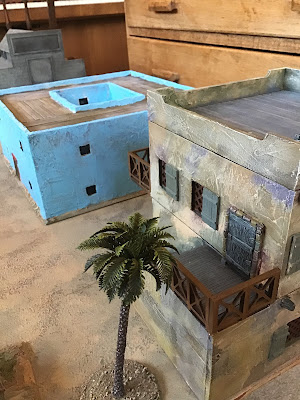 In the first game, Frazer ran the Republicans from the south of England whilst John (near Edinburgh) and Will (near Boston, Mass.) ran the Imperial forces.  I don't want to give too much away about the scenario in case I run it again but Frazer managed to pull off his mission with some aplomb. 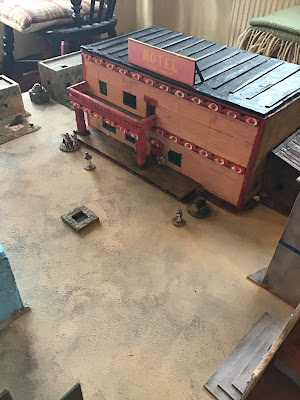 In game two Henry (somewhere in England) ran the Republicans against Wee Derek (Musselburgh) and Wil (Seattle, Washington). It was another very enjoyable game. This time the Republicans were a little more pedestrian in achieving their aim and Derek's mad dash across the plaza to gather together a force of Imperial troops proved decisive.  Although we ran out of time to finish, I think the Imperial forces had enough of an advantage to seriously interfere with Cortina's plans.
What I learned:
1. Discord worked well but I need to bear in mind that the iPad draws more power than it saves when running the camera even with a mains connection.  Recharge between sessions!
2. Derek and I disagreed (amicably) on a couple of rules interpretations. We were each right on one of them. It didn't interfere with the game but it would be helpful to clarify the command radius of a zero rated Leader.
3. Maximum Game Fun - I got this idea from Gloranthan role-players. You could paraphrase it as "Say yes, but..." to any request from a player if it will add to the fun of the game. When Wil's shooting accidentally set the hotel on fire, he asked, "Can we put the fire out?" The rules don't say anything about this but I made a conscious effort to say "Yes, but".  "Yes, but it'll be a Task with a Value of" (rolls a handful of dice).  Much hilarity was had as a result.
4. Lardy lads are a great bunch. Both games were played in a terrific spirit and the evening virtual pub was great fun throughout.
Posted by Counterpane at 2:00 AM 1 comment:

The latest game in our series of Lion-Rampant-by-Skype games took place last Sunday. 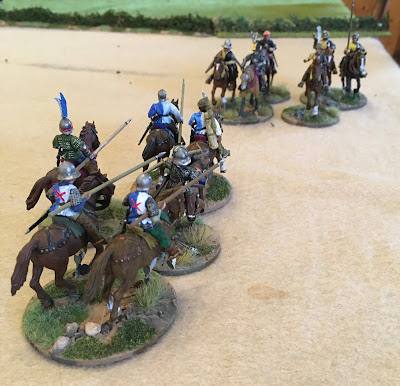 We played the Sausages with Mustard scenario from the rules book - adapted slightly to cope with our usual two-small-forces-a-side approach.

The Swiss (Andy and John) were expected to march on to the table and burn as many as possible of the four haystacks near the centre of the table. Gus and Mark's Burgundians wanted to stop them so they could use they as fodder for their horses.

The battlefield was entirely open apart from a partly hedge-lined road between the Swiss baseline and the haystacks. 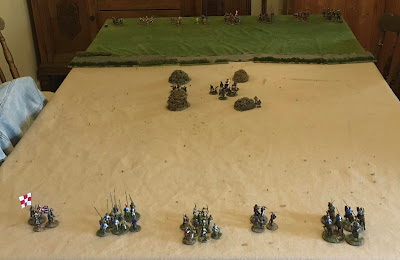 Gus had been finding mounted men-at-arms frustrating to use in previous games so I took steps to give him an alternative. With no rough going there was no danger of knights being drawn into muddy field and chopped down by the lower classes but I'd also added some other options to the available Burgundian forces.

In the event they decided to take no mounted men-at-arms at all! From left to right in the picture above they had a unit of dismounted men at arms (newly built and painted for the game), ordonnance pikes, longbowmen, a unit of bidowers (half of a crossbow unit also newly built), and some coustilliers.  Between the haystacks are a unit of Italian mercenary crossbows and more bidowers (the other half of the new unit).

The Swiss also had some choice as to units. John again went for four units of bidowers (two Swiss and two Irish), whilst Andy had two units of pike (again one of them new for this game - yes, that's 30+ figures painted in three weeks), mounted crossbowmen, and of course halberdiers. 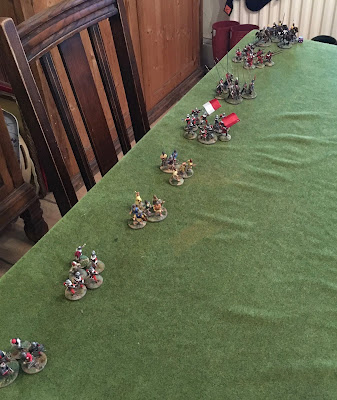 As is the way with Lion Rampant, the Swiss arrived rather piecemeal at the hedge.  Below we can see the halberdiers and the leading unit of Irish kern about to start crossing.  The bidowers between the haystacks have already taken three shooting casualties from the Swiss mounted crossbows seen passing in the distance. 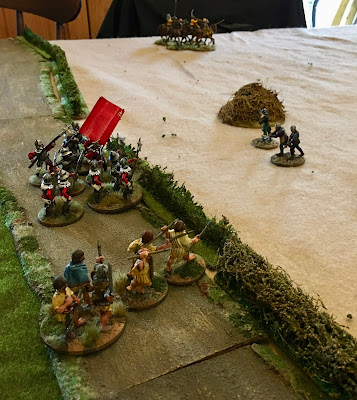 The other unit defending the haystacks was the old faithful Italian mercenary band.  The game was characterised by Gus being unable to activate anything that required him to roll 7+.  The Italians just couldn't manage to do anything useful to the Swiss. 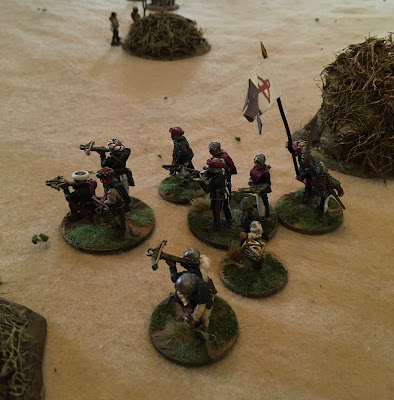 Before too long they found themselves charged by the halberdiers... 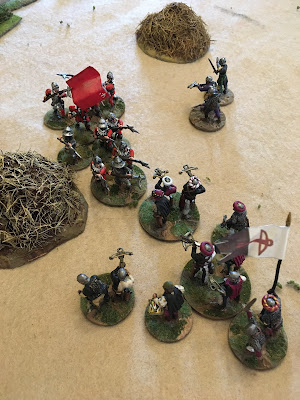 The results were fairly predictable.  A couple of halberdiers were killed but the Italians were routed.

Meanwhile on the edge of the field, a fierce little cavalry fight took place between the Burgundian coustilliers and the Swiss mounted crossbows. Somewhat surprisingly, the Swiss won the fight and eventually only Gerhardt-Heinrich von Schimmel (Mark's leader)survived. 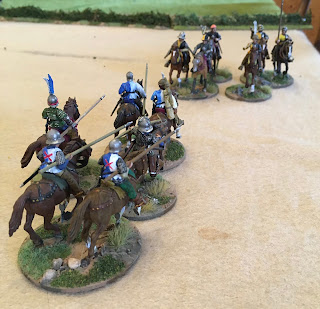 Where Gus could get moving, his dismounted men-at-arms made short work of some of the Swiss bidowers. 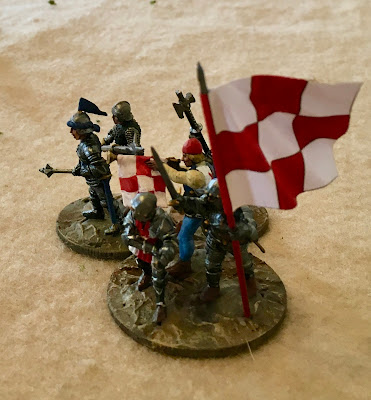 The two blocks of Swiss pike were a bit late arriving but one of them got to a haystack... 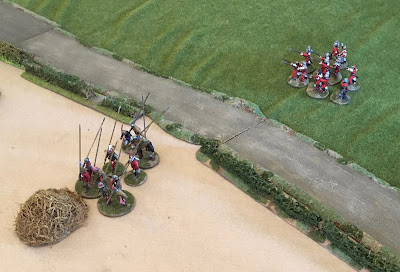 ... and the Irish reached another one. 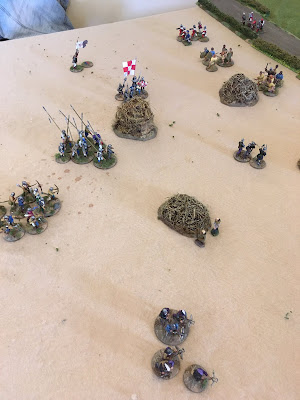 Soon both haystacks were alight. 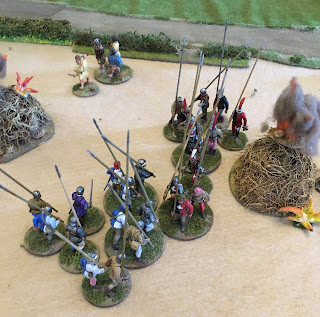 Having driven off the Burgundian coustilliers, the Swiss mounted crossbows were themselves forced to retreat from the accurate fire of the enemy's longbowmen. 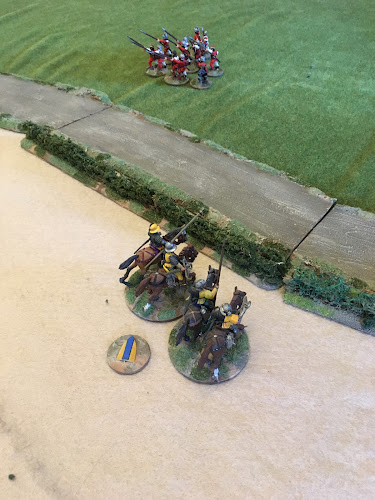 Gerhardt-Heinrich von Schimmel was the only survivor of the coustillier unit. 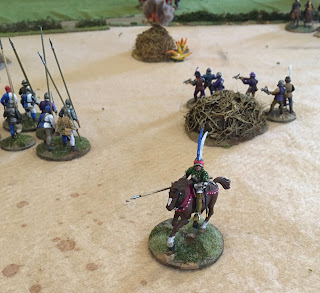 Somewhere in the confused melee around the haystacks, Beat Züsli received a poleaxe blow to the head and was believed killed. Fortunately his men carried off his body and he was found to be merely stunned.
The Swiss were driven off having fired two of the four haystacks.  So overall a draw perhaps?
Well maybe but this time boasts were to prove significant.
Albert Saissions-de-Dôge had boasted that his men would kill more with missiles than and-to-hand. Sadly Gus couldn't get the crossbowmen or bidowers to shoot and his men-at-arms carved their way through the enemy bidowers racking up about six times as many casualties as the missile troops had caused. He gained four points of Glory as a result of two haystacks remaining intact (I'd changed the rules slightly to allow for there being two forces on each side) but lost one for the failed Boast. Net gain of three for  running total of six.
Gerhardt-Heinrich von Schimmel also gained four Glory for the remaining haystacks and lost one for failing in his Boast that "Every blade shall be drawn". He moves up to a running total of 13.
Beat Züsli was believed to be dead on the battlefield but later turned up alive and well (thanks to the Pikeman's Lament officer casualty table). With a net three points of Glory (burned one haystack but failed in his "My retinue will stand firm" Boast) he is now also on 13.
Finally, Gustav Sneffl survived the action without really doing anything.  His men burned a haystack for four points of Glory. However, before the battle he'd boasted to his men "My own sword shall not be drawn". This was a three point Boast giving him seven Glory for the battle and a running total of 19!
I think we may get in one more game of Lion Rampant. If we do so it's going to have to be the Burgundian assault on Dickerhausen isn't it?
Posted by Counterpane at 1:22 AM 2 comments:

I needed some haystacks for the next Lion Rampant game.  Searching through the bits box I found some off-cuts of the PVC board I've started using for basing my terrrain projects, some bits of the foam you get in the back of bubble packs of figures, and some offcuts of doormat too small to make wheat fields.

I started by cutting the PVC board into rough 3" circles with chamfered edges. I then ripped the bits of foam into irregular shapes and glued them to the board in piles.

I applied my usual paint-and-tile-grout ground covering around the edges and used PVA to stick on fibres from the doormat. 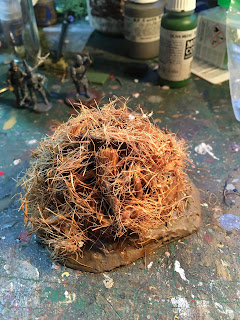 When the PVA had dried I painted/dripped watered-down PVA one the top to seal everything in place.

When that had dried I painted the whole thing with cheap brown acrylic paint (from Home Bargains). 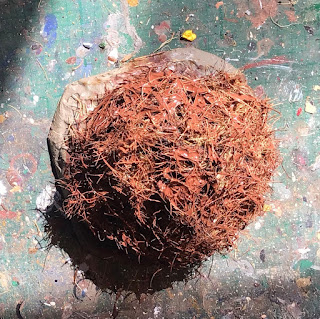 More drying time and then a couple of progressively paler dry brushes over the top and there you go... 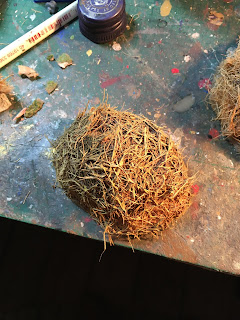 Just ripe for some raider to either steal or set alight!
Posted by Counterpane at 6:00 AM 5 comments: