I thought I'd get some of the Woebetides terrain I've done so far set up for a photo shoot.

Posted by Counterpane at 2:36 AM 2 comments:

It's a lovely day outside so I thought I'd take a pic of some of the more recently finished denizens of the Woebetide Islands. 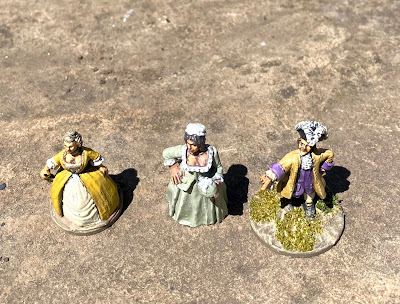 On the left we have Josephine de Pommefrite, the daughter of the French comptoir. She is a spirited young lady not above getting herself into trouble. Fascinated by the stories told by the Arab merchants visiting Port Charles, she has taught herself the local dialect of Arabic in an attempt to extend her knowledge.
In the centre we see Constanza, Countess Czerwinska. This Polish noblewoman was widowed on the voyage home from India. She finds herself stranded in Port James. She is vivacious and witty and has become a strong favourite among the local officers of the British East India Company.
Finally we have Sir Warwick Bimble. He has been described as "a man of no discernible talent".
All three of these will be available as support choices to forces of the appropriate side. They may (or may not) prove useful when the respective councils of war allocate tasks between the available forces.

Posted by Counterpane at 6:11 AM 2 comments:

I drew a map. It's not to scale but it shows the minimum major terrain items needed for September's Woebetides campaign weekend. The coloured in items are done. 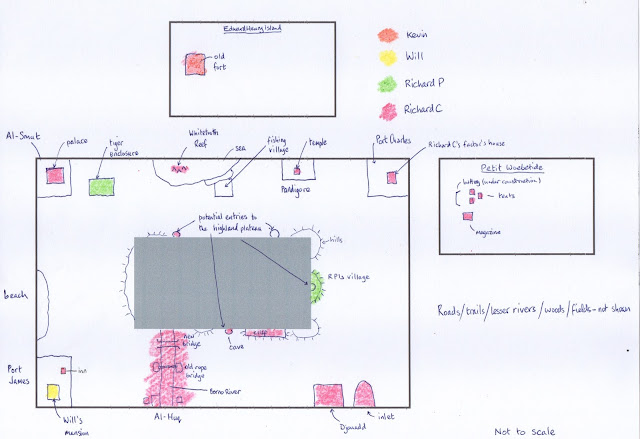 The half- (or three-quarter-) hills around the void in the middle of the main table don't need to be exactly as portrayed - I just want something that will indicate to players that the centre of the main island is mostly impassible highlands.

A couple of days ago I decided to make a start at building something suitable: 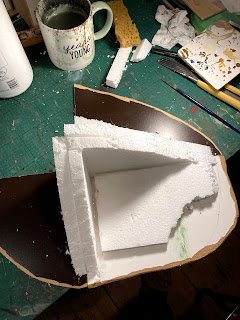 I decided to make three 90 degree corner hills with profiles such that they can be combined to form a single 270 degree outside corner. 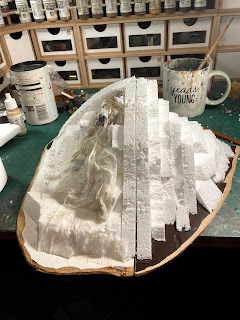 I tried different ways of building up the slopes with off-cuts of polystyrene. In the end, the best method (sadly not shown above) was progressively smaller slices alternating at 90 degrees to each other. Hot glue worked OK for attaching the polystyrene as long as I didn't leave the glue gun switched on too long. If the glue got to hot it melted the polystyrene too much.
I've now started covering the polystyrene with kitchen towel soaked in watered down PVA. I added a bit of cheap brown acrylic to the water/glue mix. 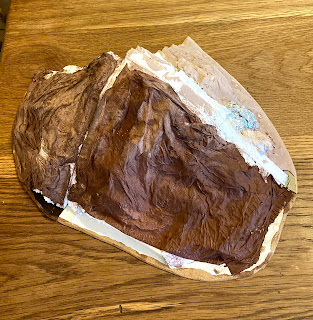 I've also tried a bit of filling with my usual tile grout mix and also some scrunched-up kitchen foil that might serve as a rocky outcrop. 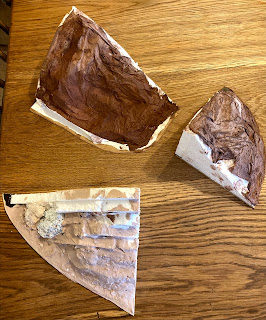 I may paint the longer ridge (on the left in the picture below) as a pathway - for plot purposes I want three or four routes into the highlands. 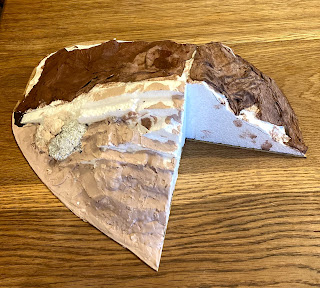 Update when the first layer of groundwork has dried - it's scorching in Yorkshire right now so hopefully that won't be long!
Posted by Counterpane at 2:28 AM No comments:

Most of my focus recently has been on getting terrain finished for the Woebetides. I've got the Wali of Smut's palace done - it's an MDF caravansaray very kindly sent me by Richard Phillips. Pictures when I can arrange a suitable photo session.

In between sessions on the palace I've managed to get finished some other 28mm stuff. The Crisis Point big game will need lots of Deployment Points and Plot Points and the latest are just completed: 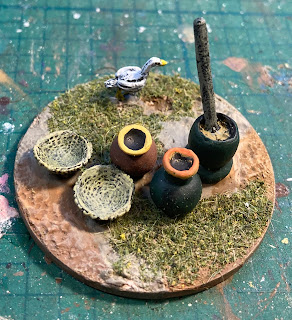 This first one is obviously best suited to the native Woebetideus but might pass for Arab if need be.  The jars and baskets are Foundry, the duck is from a farmyard animals set I bought at Claymore (not sure of the manufacturer). 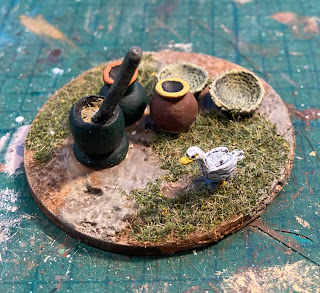 Next up we have a nicely generic scene of a goat browsing on the undergrowth. 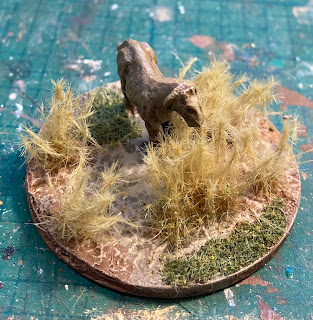 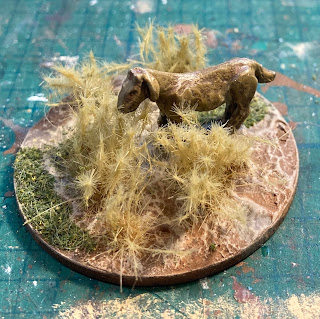 Lastly as far as plot points go we have this clump of elephant grass with skull. 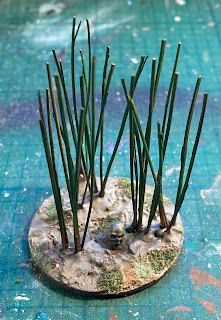 The skull is from the same Foundry African village accessories set as the jars and baskets. The grass is from broom bristles.  Again a nicely generic one this.
I took delivery of some Pendraken 10mm models (for a project that'll appear here later) that Tom Davis added to an order he was putting in. When I picked up the 10mm stuff, Tom kindly gave me a few figures he had no use for (and at the same time I palmed off a load of 15mm toys on him). A couple of the figures are already done a couple of weeks later. 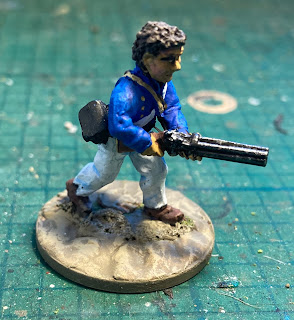 This chap with the Nock Volley Gun was already painted up as Sergeant Harper of the 95th Rifles. However the paintwork was a bit scraped and I've no plans to do the Peninsular War in 28mm as I've already covered it in 20mm.
There is a plan, however, to do the 1812 Riga campaign with Sharp Practice. I therefore carved off the shoulder straps and repainted Harper as a member of a Royal Navy landing party. He'll be transferred to Richard Phillips to aid his Russians against my Prussians (when they're eventually painted). 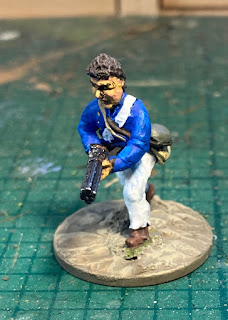 Another figure from Tom was this Victorian chap. 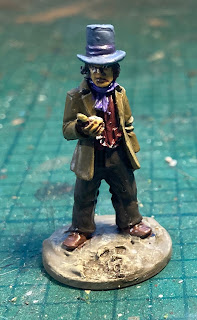 I think he's another Foundry model. He was a joy to paint and I had him done within a couple of days of picking him up from Tom.  I'm running Cortina at Matamoros in November at Steel Lard - the first time the game's appeared to players not via Zoom link. I think this chap may appear among the civilians in the street to help remind players that 1867s Mexico doesn't entirely match the peons-in-a-village picture of The Magnificent Seven.