Givin' It The Works

The word spread around the twentieth century wargaming fraternity like glandular fever round a university campus in freshers' week.  Remainder bookshop The Works had diecast Russian tanks in 1/72nd scale for two pounds each!

It's taken me visits to three branches but I eventually I've amassed a useful collection that nearly doubles my holding of WW2 Soviet Armour. 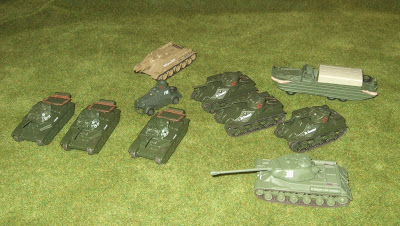 I'm particularly pleased to have found a single SU-122 as that's exactly the number I need for the Grossdeutschland at Kursk scenarios.  The three Matilda IIs might substitute for T-70s in the same volume.

I've always fancied fielding some Lend-Lease M3 Lees.  I don't see myself needing more than one JS-2.  Finally there's a DUKW and a lovely little BA-10 armoured car.  Not bad for twenty quid!

One of the branches of The Works I visited was in Durham.  We were there on a weekend family break and in the charming indoor market I came across this De Agostini StuG III. 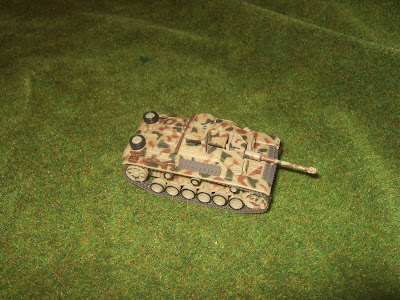 I think it's an Ausf F though the box said it was a G.  I need two Fs, again for Grossdeutschland at Kursk, but my old Airfix Ausf G will do as a substitute.

Jamie and I managed to play another game of Saga (our second) this evening.

We stuck to the same forces as last time; Jamie playing the Welsh and I the English (Anglo-Saxons if you insist).  This time the scenario involved two fords over a river.

I decided to defend one ford with my two large units of Levy.  I figured that, whatever Jamie threw at them, they were likely to last some time defending the river as the sheer number of men in the units would take some killing.  The rest of my army (Warlord, Hearthguard and Warriors) would rush forward and force a crossing of the other ford.  I started with the Hearthguard in a central reserve position to keep Jamie guessing.

Jamie currently plays the Welsh as just three units - Warlord, 12 Levy and 12 Hearthguard!  The last of these is a serious powerful unit.

This time we got the rules right (or at least righter).  Jamie got Saga dice based on the number of units, not their points value, and I used the right dice.  Apparently the pdf for the Anglo-Saxon dice symbols on the Saga website gives you the wrong mix of symbols.  As a result both armies should have been weaker than last time.

Jamie started by moving his Hearthguard into the woods opposite my Levy.  His Warlord and Levy moved through the other woods near the other (right hand to me) ford.  I already had my Levy at the left hand ford and rushed the rest of the army to the other ford.

Crossing the right hand ford, the English warriors took the first casualty of the game from Welsh javelins.


The English Warriors charged into the Welsh Levy and the two Warlords clashed.  Jamie put all of his efforts (and Saga dice) into defence and the Welsh stood their ground heroically.  The English were forced to pull back. 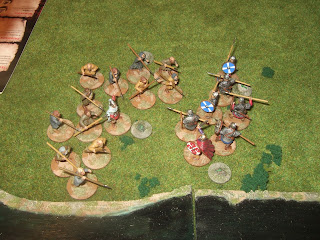 However, now the English Hearthguard arrived across the ford to help. 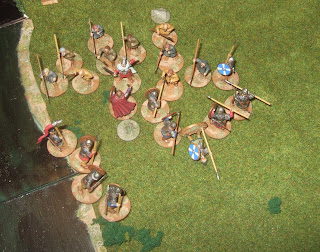 Meanwhile, the Welsh Hearthguard charged towards the other ford and were met by the English Levy. 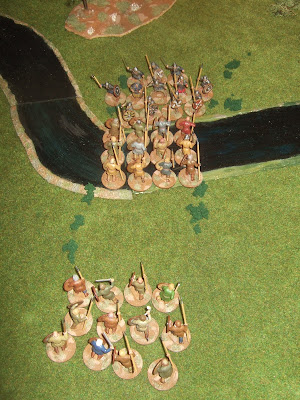 Again defensive Saga abilities were played (this time by me) and the English were able to hold the ford.

After turn 7 the final positions saw the English holding the left hand ford... 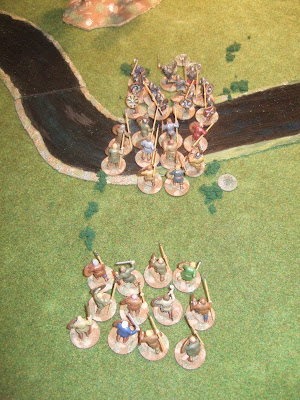 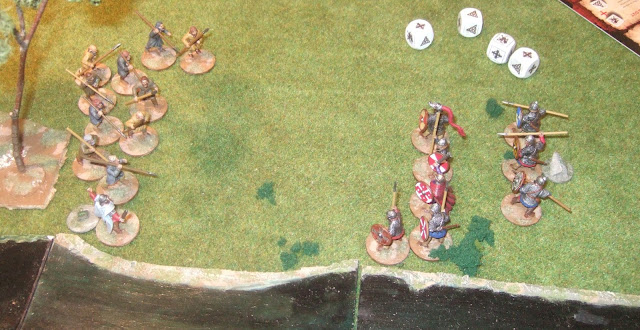 I'm beginning to feel like we're over the worst of learning the Saga system now.  We can begin learning the right tactics rather than struggling to understand if we're playing the game correctly.

All of the figures painted by Jamie.
Posted by Counterpane at 12:38 AM 2 comments:

A Quick Game of Arc of Fire

One of the advantages of having the twins back from university is that I have a ready-made opponent for the occasional evening game.  Last Friday I texted Jamie from work to suggest a game of Arc of Fire that evening.  Being a good lad, he said yes.

We played the Prelude scenario from Grossdeutschland at Kursk by Scott Fisher and Nathan Forney. This takes place on the eve of the Kursk offensive and sees a German patrol attempting to destroy a Soviet forward outpost.

Jamie played the Germans with platoon HQ, two squads and a 8cm mortar team.  As the Soviets, I had a forward observer team in the reinforced basement of a small house, a rifle squad, and a medium MG team.  I also had a couple of fire missions of 76mm artillery support to call on.

The house can be seen on the left in the pic below.  The Germans entered from the far end and chose not to advance along the gully (marked with lichen in the photo).  This was probably a good move as my hidden deployment had the Maxim gun deployed in the gully. 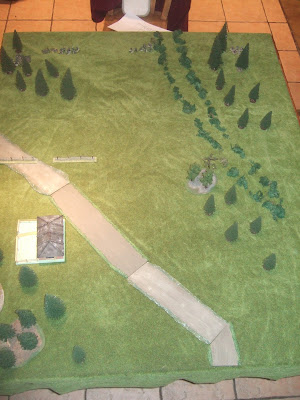 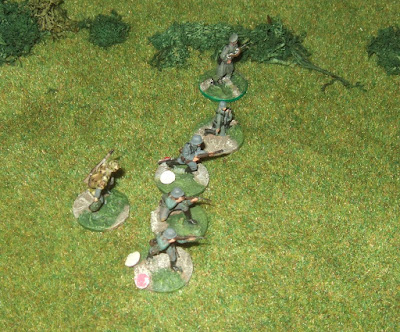 The mortar team set up on the far side of the gully but then discovered that they couldn't detect the hidden Soviet units at any range inside the minimum range for their mortar.  I should have remembered that they could have sent the team commander up to 6" forward to spot for the rest of the crew. 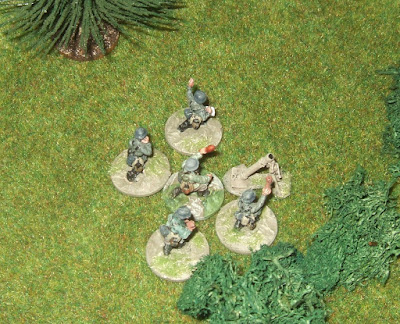 Jamie's first squad established a base of fire on the hill... 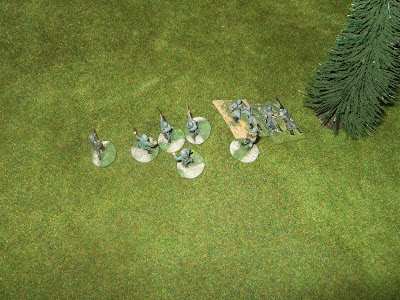 ... whilst his second squad made for the house needing to cross barbed wire to get there.... 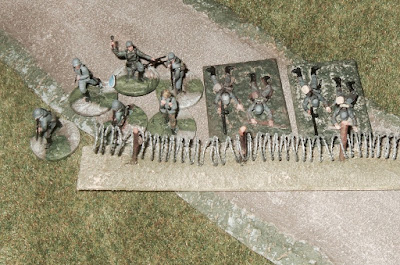 The assault squad crossed the barbed wire quite easily (Jamie rolled the minimum deduction from his move twice) and moved forward to attack the house.

By this time I'd managed to get my medium machine gun redeployed into a position from where they could fire laterally across the table and hit anyone assaulting the front of the house.  Unfortunately it was only after the Germans had launched their close-assault that the MMG team managed to make the TAC roll they needed to spot and fire on them

I needn't have fretted, though.  Assaulting an unsuppressed position is bloody and the forward observer's SMG played bloody havoc with the assaulting Germans.  When Jamie called off the attack after six turns, the assault team was in tatters. 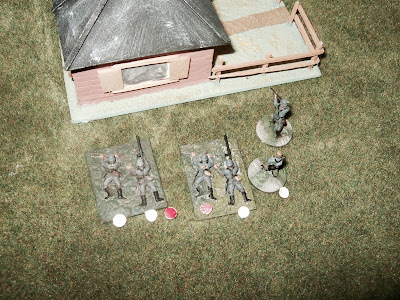 Arc of Fire remains my favourite modern skirmish system but I do an apology to Jamie for not fixing his problem with the mortars during the game.  We should play this one again and get it right next time.

By the way, any comments on the last two photos?  I think the faded look (courtesy of Photos on my Mac) gives a nice WW2 look to the images.

What I bought on my holidays...

On the way back from our recent trip to Kent we called in at the Roman fort of Richborough Castle (Rutupiae for you Latins).  In the gift shop I found this nice book on the Roman Army and its enemies. 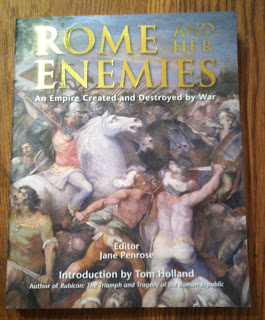 It's published by Osprey and many of the illustrations look like they first saw the light of day in Men At Arms books and I guess much of the text may have done so too. 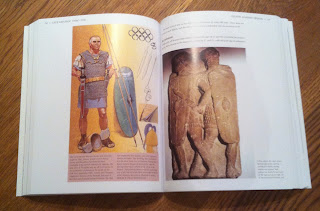 However, I don't have that many of the MAA books covering the period and £14.99 for a book of over 120 pages seemed like a good deal. 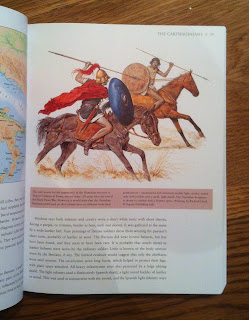 ... and then the Hellenistic successor empires.  In the late republic period the Numantines of the Iberian peninsula get a chapter of their own as do the Gauls and the armies of the 1st century BCE Roman civil war.  In the early imperial phase we cover the British Celts, the Germans and Dacians, and the Parthians.  Finally the late imperial section features the Sassanids, Goths and Huns.

The book's an enjoyable mix of general history, guide to the armies, and accounts of campaigns.  Well worth the price.

Posted by Counterpane at 1:02 PM 3 comments:

Email ThisBlogThis!Share to TwitterShare to FacebookShare to Pinterest
Labels: Ancients

Jamie has spent the last year or so building up a nice collection of 28mm Dark Ages figures with a view to trying out Saga.  As the title suggests, we finally got to give the rules a try this evening.  Sadly I only had my iPhone to hand so the pictures are rather poor.

I chose to play Anglo-Saxons (i.e. 7th century English) leaving Jamie with the Welsh.  I had a Warlord, unit of four Hearthguard, a unit of eight warriors and two units each of twelve levy.  Jamie also had the obligatory Warlord but then had two units of twelve figures, one of Hearthguard and one of Levy.  I think the Warlord was called Theakston (but I may have misheard).

Saga is, by repute, a game that you only learn to play properly after several goes.  Neither of us had played before and I'd seen neither rules nor battle board previously so this was very much a learning experience.

As Jamie's army were all armed with missile weapons and I had none, I decided to hide my Levy in the two woods and put my Warriors and Warlord in the centre.  The Hearthguard would stay at the back and redeploy as required depending on what Jamie did.

What he did was to move forward with his Levy on the right and his Teulu (Hearthguards) on the left. 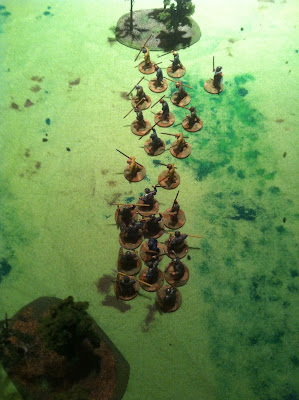 He then taunted my Warriors into dashing forward (using a special ability on the Welsh battle board) and into javelin range causing me to take the first casualty of the game.

I was rather flummoxed by the fact that I had nothing that could take on his huge unit of hearthguard in close combat and he could shoot at distance whilst I couldn't.

As time was running out, I launched an all-or-nothing attack by my Warlord (backed up by his hearthguard) against his opposite number.  Sadly I wasn't able to take out the big man.

On the last turn Jamie launched his Hearthguard forward and wiped out my Warriors.  The three Hearthguard I killed in the process meant that Jamie one by four victory points to three. 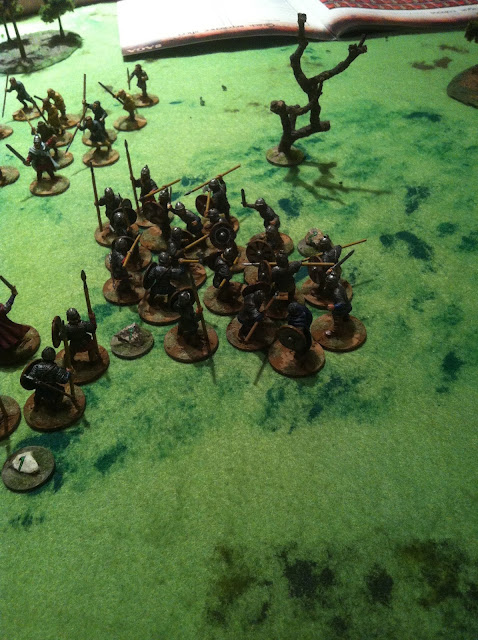 We've decided to have another go with the same forces so we can get a better feel for what works and what doesn't.  Better photos next time.


Posted by Counterpane at 3:12 PM No comments: