Cutting Out Action at Djouadd

It's been a while since I had anything to post about here but yesterday we gathered virtually for a game of Sharp Practice that deserves to be recorded. 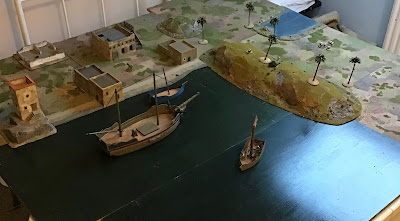 The setting was the Woebetide Islands, specifically the Coastal Arab town of Aj Djouadd, where a French merchant ship had been seized. Achmed Ibn Faad, the local caid, in pursuance of his lawful duties (or if you prefer, the notorious pirate Achmed Ibn Faad in an attempt to extort money out of the French East India Company) had taken the Marie-Hélène Charretier and she now lay at anchor with a skeleton crew of sepoys guarding her.

The French, under Lieutenant de vaisseau Hollande (Phil Gray) were to launch a night-time cutting out mission to recover the ship and her crew. Richard Phillips ran the Arab forces assisted by Diego Correa who joined us from Santiago de Chile. 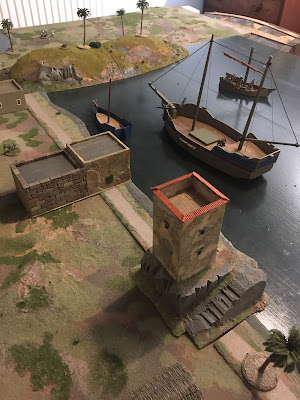 I wanted to simulate the disruption to the Arabs' command and control caused by this being a surprise night attack but still give Richard some command decisions in the early stages.  I did this by asking him to rate his sub-commanders from most to least reliable and competent. Richard chose to put his best men in charge of the guard-crew on the merchantman and in the watchtower while the artillery crew and the patrolling dhow were led by less reliable followers.

I had Richard roll four dice (without telling him why) and used the scores to determine an Activation Value (AV) for each of his sub-commanders. The values were allocated in the order determined by Richard's ratings. Richard rolled 1, 1, 2, 5. The 5 was allocated to the crew of the patrolling dhow who now needed to roll 5+ on 1D6 before they could successfully activate. These rolls were needed until each group successfully activated. The sepoys in the watchtower could activate automatically (having an AV of 1+). The sepoys guarding the merchantman would have had an AV of 1+ except that I'd decided in advance that I would add +2 to their AV (up to a maximum of 6) as they had discovered the French skipper's secret stash of brandy on board!

I gave Phil the option of entering the table at any point along a "sea edge" of the table. 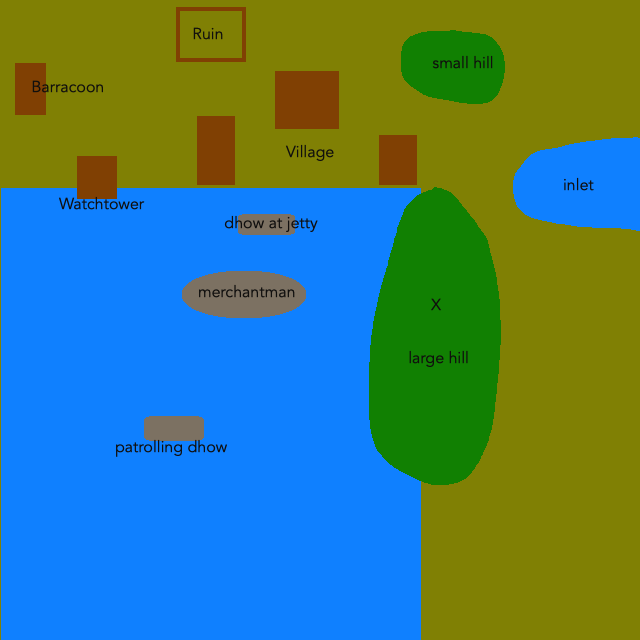 He elected to bring on his boats right next to the watchtower. Lt Panais with a group of marines would land to the left the tower with two longboats carrying ship's guns landing to its right. Meanwhile another longboat would carry a group of sailors directly to the Marie-Hélène Charretier.

Immediately the marines rushed up the beach and the silence was shattered by a warning shot fired by one of two guards outside the barracoon. There was a brief flash of moonlight on bayonet and both guards lay dead.

Six Arabs in the the watchtower had been alerted however and the marines came under fire from within, losing a couple of figures in the first few turns of the game.

The barracoon proved to hold the crew of the Marie-Hélène Charretier and they were shown to the marines' boat and told to join the attempt to recapture their vessel.

By now the crew of the Arab gun on the large hill to the east had awoken to the danger and roundshot began to rain down on the French boats.

Even the crew of the patrolling dhow managed to get their act together and they closed in on the attacking French boats. A blast at short range from their swivel gun put enough Shock on the recently freed crew they should have fallen back away from the enemy. We translated this to their boat sheering off to try and put the hull of the Marie-Hélène between them and the dhow.

In the picture below the grey boat containing the rescue merchant crew can be seen next to the two white longboats, who have just run up the beach. 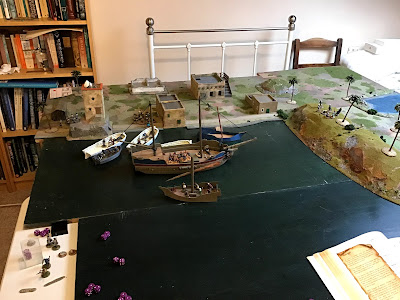 Meanwhile, Hollande's sailors had swarmed up the side of the Marie-Hélène Charretier. With pistols, cutlasses and boarding pikes they made relatively short work of the Arab guards and were soon starting to cut the anchor cables and sheet home a foresail to give them steerage way. 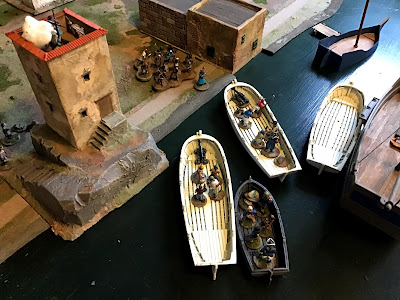 In the meantime, Achmed ibn Faad had gathered the men of the village and now led them in a wild charge to try and capture the beached longboats. despite a last minute blast of grape from the right-hand boat, the Arabs swarmed aboard and butchered the crew to a man (though it would later emerge that the leader of the guns, Enseigne Houllier, was alive but knocked insensible at the tiller). 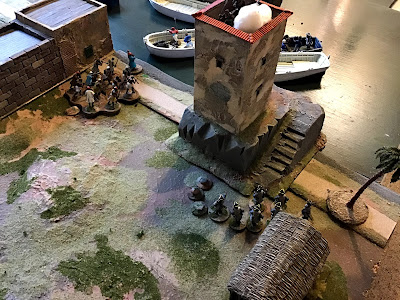 Success for the Arabs was brief, however. The other longboat had previously pulled back slightly from the beach and was able to swing around and blast the villagers in the other boat at point blank range. Grapeshot ripped through their ranks leaving the survivors demoralised and Achmed ibn Faad lying wounded. 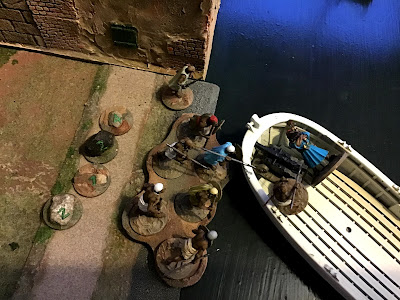 We called it a day at 1700 GMT (1400 in Chile) with the Marie-Hélène Charretier in French hands but under fire from the dhow and from the cannon on the hill. 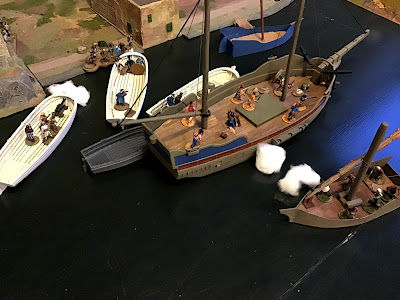 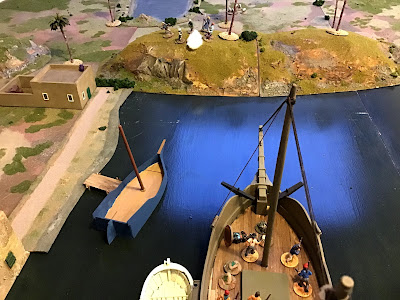 An honourable and enjoyable draw was declared but I think if we'd had another hour, the French would probably have been victorious.

Many thanks to Phil, Richard and Diego for taking part. We struggled a little with comms. We started using Discord but switched to Skype after a bit to see if it would be more reliable. It wasn't.

One final point; those few of you in the intersection of the sets "wargamer" and "folky" may like to note that Marie-Hélène Charretier is a French translation of "Mary Ellen Carter" - a little tribute to the late Stan Rogers.

Posted by Counterpane at 5:00 AM 6 comments:

One of the buildings I knew I needed for the Woebetideus campaign was the Hindoo temple at Pandigore. It's an important landmark and, who knows, it might become relevant as the plot develops. 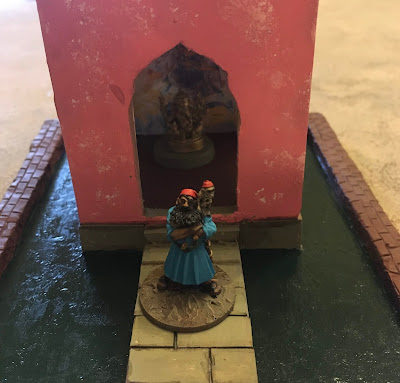 The base is PVC board. The low retaining wall around the pond, the walkway, and the plinth on which the temple sits are cut as a single piece from a sheet of foam-core. Brick-work added with Green Stuff, stones from thin card. 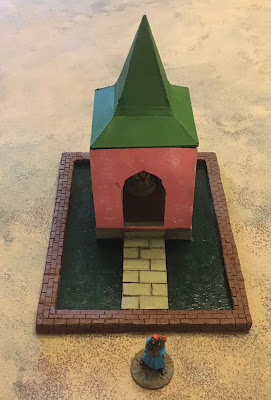 The walls are also foam-core with stippled paintwork.  The roof is made from thin card. 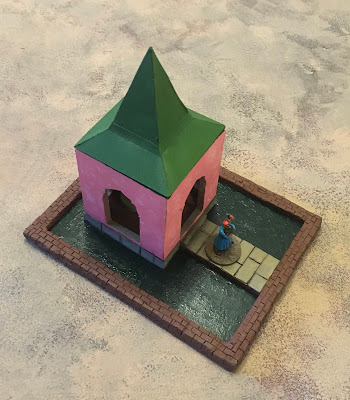 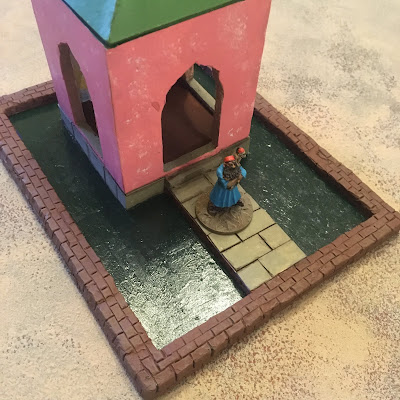 Inide the temple you can just glimpse the golden statue of Ganesh, purchased at Penkridge last year.  The wall paintings were found on the internet, printed to size, and stuck on with Pritt! 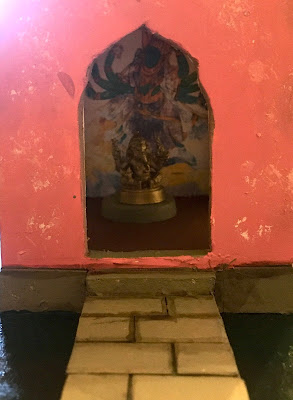 Posted by Counterpane at 7:26 AM 3 comments: