Some thoughts on British forces for the Woebetides

I originally focussed on the War of the Spanish Succession period for the Woebetides big game because of the availability of the Warlord (ex-Wargames Factory) plastic figures for the period.  Further research showed that this period coincided nicely with European pirates moving into the Indian Ocean and with the Mughal Empire beginning a slow but terminal decline.  Further research, however, throws up other considerations.

Firstly, we need to bear in mind that India (and by extension the islands of the Indian Ocean) won't see British Army troops for another century or more.  The only "British" troops likely to have appeared in the Woebetides, if we follow history with any strictness, would be native sepoys employed by the East India Company.  At this time, sepoys would be native troops in their own clothing - a far cry from the uniformed sepoys of the Indian Mutiny period.

The guys in the bottom right of the picture below are probably what we'd expect to see. 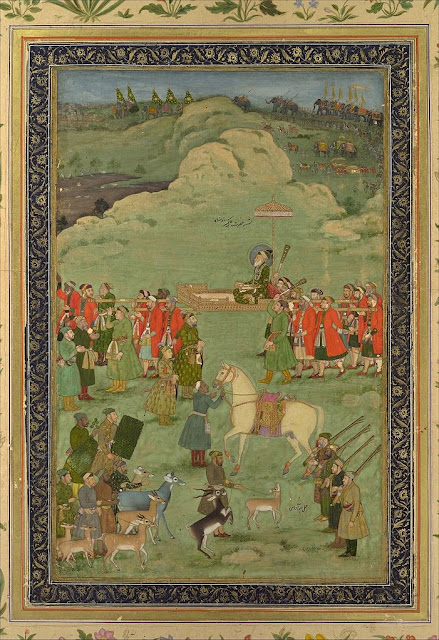 This picture is of the Mughal Emperor Aurangazeb in 1705, by the way, so spot-on for our period.  This one might work too... 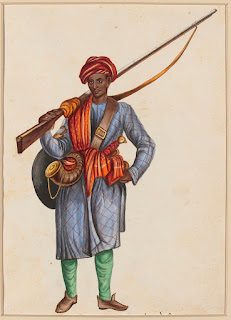 It probably wouldn't be hard to recruit such forces in 28mm metal but this rather defeats the original object of reducing the buy-in cost of the event.  So what can we do to justify including conventional European infantry in our British forces for the Woebetides?

We could go the fictional route.  British units of the period were still, as I understand it, named after their Colonel.  Might perhaps some rich EIC investor have paid for a company or two of Colonel Mustarde's Regiment of Foot to be shipped out to protect his assets in the islands? 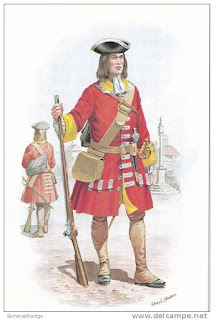 A perhaps more credible alternative (and we're talking alternative history here after all) is to add some marines to our forces.  The Royal Marines as such don't exist yet (although the Corps traces its history back to the founding of the Duke of York and Albany's Maritime Regiment of Foot in 1664) but six regiments of marine infantry were in existence during the War of the Spanish Succession.  Maybe if we add some important person to the mix (an ambassador to the Great Mughal perhaps) we might justify a company of Marines being sent along as his escort? 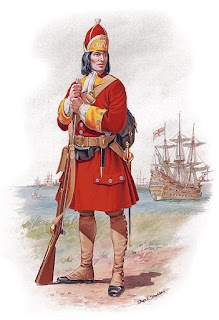 Another alternative troop type for the British would be militia raised from the civilian population of the nascent colony.  These would probably be less well-uniformed than their regular compatriots. The chap on the left, below, is a French Canadian but might perhaps give us some idea of how militia might look (minus the Native American moccasins). 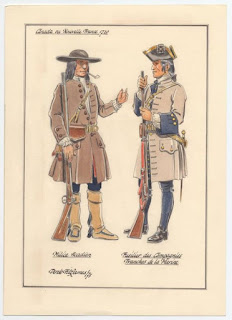 The next step should be to work out the stats for these various troop types for Muskets & Tomahawks and/or Sharp Practice.  I'm still not decided as to rules though I'm leaning towards the latter.

Posted by Counterpane at 3:34 AM No comments: