By way of a break from working one the ice-breaker I had a go at painting a 28mm figure the other day.  This American Civil War veteran is from a Foundry Wild West set but could be used at a pinch in a Pulp game. 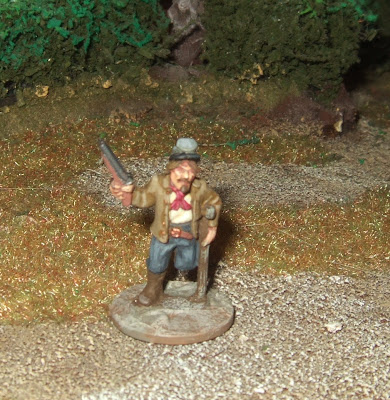 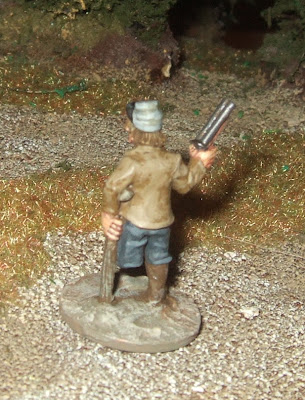 Posted by Counterpane at 11:59 PM No comments:

On the workbench - January

Stately Counterpane Manor is a bit snowed in: 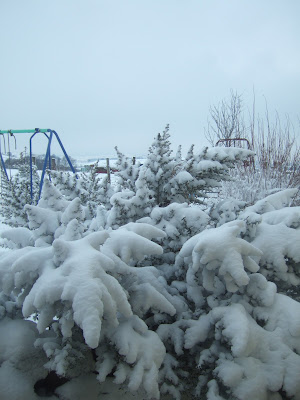 But it's given me a chance to catch up with the blog and to make some progress on stuff for the Big CWC Game in April.

Still on the workbench after months of off-on work is my 1/285th scale ice-breaker, the USS Burton Island.  This ancient Revell kit is proving to be a bit of a bugger to build.  One or two places have need heavy application of filler and the instructions aren't terribly helpful from a painting point of view.  Three different colours are indicated for the decks.  In the end I've gone for Vallejo Reflective Green. 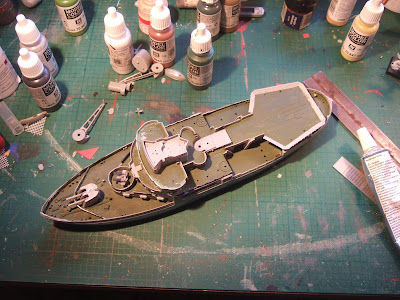 The vessels is now water-lined and when the latest batch of filler has cured, I'll be within a session or two of completing construction so I can go on to paint her.

A requirement for the Big Game is to have enough fighter aircraft to mark areas where one side of the other has achieved air superiority.  These two Luftwaffe F-104s will contribute to the NATO effort in this regard. 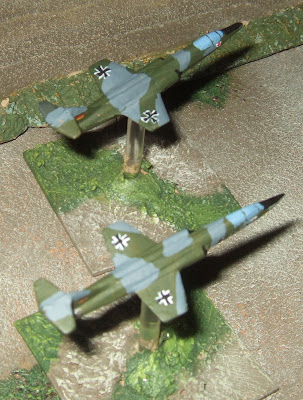 Finally on the workbench but not yet started is this terribly kitsch ceramic building.  It was only 50p from the local flea market and I figured it would paint up reasonably as a German house in 15mm scale. 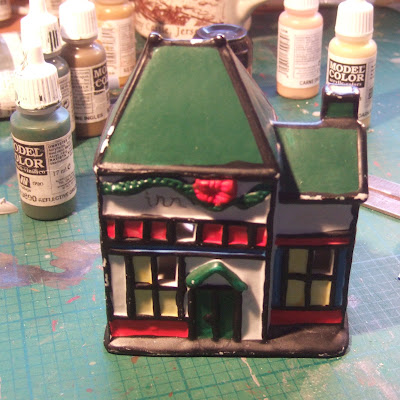 Posted by Counterpane at 6:56 AM No comments:

My most recent wargaming purchase is a copy of the .45 Adventure pulp skirmish rules. 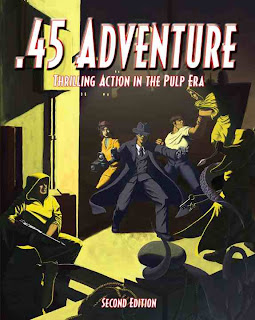 I’ve long fancied doing some miniatures gaming in the Fu Manchu, Indiana Jones, Doc Savage sort of genre and these rules had the advantage of requiring relatively low numbers of figures and of being available from Wargames Emporium.

The rules take a sort of RPG-Lite approach but are well focussed on table-top resolution of the action.  The basic resolution mechanisms are unexceptional, revolving around opposed (d10) die rolls to which relevant attributes are added.  Situations where one side has a tactical advantage are handled by giving them more dice to roll and allowing them to keep the single best score.

The key mechanic that takes the rules into pulp story-telling territory is that the playing area (typically two feet square) is scattered with Encounter Markers.   When a miniature moves into contact with an Encounter Marker it is revealed as a plot element.  It may be a trap (Indiana Jones’s rolling boulder for example), a vital clue or item of treasure, or perhaps an event such as the arrival of local law enforcement types.

Unlike most conventional RPGs (my interest in the genre was first prompted by the old FGU game Daredevils)  .45 Adventure is designed to have both heroes and villains run by players.  An umpire is desirable but not essential.

In addition, there are also rules for 1930s super science (unreliable and hard to use) and the occult (distinctly Lovecraftian in tone).

I had a little play with the rules today using a few figures I had handy and some terrain that happened to be n the right scale.  Pulp adventures can take us to the backstreets of Cairo or the jungles of Central America but on this occasion I brought Ninjas to the quiet lanes of rural England.

The hastily cobbled-together plot had the Honorable Miranda Carlyle and dashing French pilot Pierre Baudouin having just landed their biplane near the house of Professor Rosencrantz whom they seek for reasons to obscure to go into.  Meanwhile their unknown adversary has sent a team of four Ninjas to search Rosencrantz’s estate for clues as to his whereabouts.

The round markers are randomly positioned Encounter Markers the first two of which turned out to be poachers’ traps one of which caught Miranda and would leave her immobilised for the rest of the game. 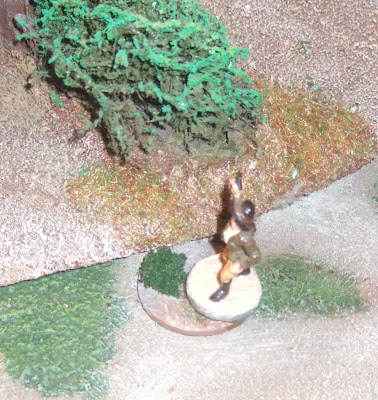 I’ve not yet got the hang of balancing .45 Adventure scenarios.  On this occasion I gave the Ninjas four Level 2 (sidekick-level) characters whilst their opposition had two Level 3s (heroes) and the possibility of PC Warburton (a Level 1 “extra”) appearing as a result of an Encounter Marker.  I think this might have been a little too much in the Ninjas’ favour particularly as PC Warburton never arrived - his Encounter Marker being the only one not visited during the game.

The game degenerated into a rather one-dimensional affair with the two of the Ninjas keeping Miranda and Pierre busy in close combat whist the others checked out the Encounter Markers. 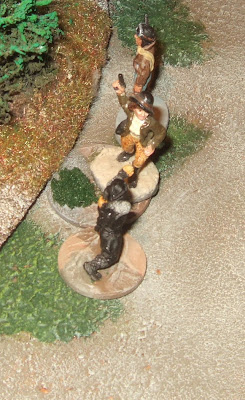 Having found “clue to Prof Rosencrantz’s whereabouts” and “mysterious jade idol”, the Ninjas then proceeded to successfully withdraw under pistol fire from the heroes. 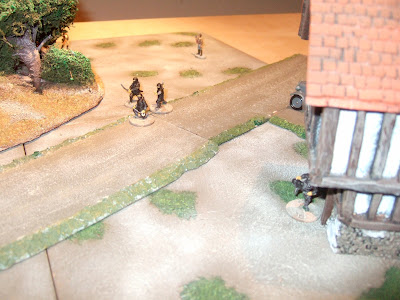 The rules seem to be OK and worth pursuing.  I’ll have to consider running a campaign to make use of my growing collection of Mexican types - maybe an expedition of the jungles of the Yucatan?

My only disappointment so far is with the physical quality of the rule book.  It’s a perfect-bound softcover and a couple of pages were almost loose by the time I got it home!

It's a little delayed but here is my report of the second game we played over the Christmas break.   Andy and Richard Sangar and Rob Connolly joined Jamie and me for another game of Sharp Practice.

The set up was another go, with some adjustments at the scenario that was upset by random events earlier in the year.  I'd changed the forces slightly, giving the British an extra big man and two 8-man units of rifles rather than one 12-man unit.  The gave me a first chance to use Major Hector McLeod. Of course, like all new units he came to a sticky end, as we shall see.

The table featured the small riverside hamlet of Dos Casas ("Two Houses" - there being two houses and an inn).  The bridge at Dos Casas was important because it would be need for escape or pursuit in the event of a decisive result in tomorrow's main action.

The action reached an early climax when the Major McLeod tried to lead a bunch of his lads through the front door of the inn just after the French had entered from the rear. 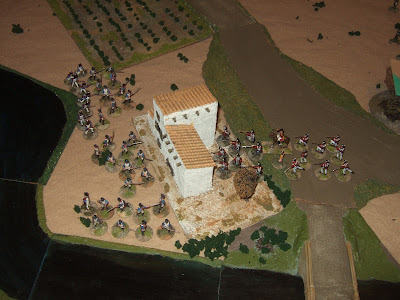 The result was a melee that went on for two rounds with casualties shared evenly before, at the third attempt, the French managed to repel the rosbifs. 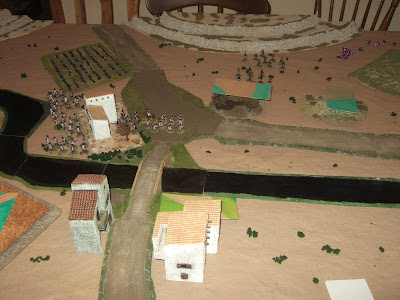 Eventually the British line infantry were forced to recoil from in front of the inn as the French were able to get just too many musket barrels in a position to fire upon them.  The Dragoons surged across the bridge and charged into the Rifles.  Cavalry - even the few who got there on the first round - against unformed infantry is always going to bloody and the Rifles took heavy casualties before bolting to the terraced hill behind them.

The Rifles were still intact as a unit but they were too few to have any hope of taking the bridge so we called time on a clear French victory!

For those interested the figures were a mixture of 20mm plastics from Airfix, HaT, Esci/Italeri, Revell, and Zvezda.