Sometimes you feel like a plaything of the gods.  The muse of wargaming seems to be following me around and whispering stuff in my ear at the moment.


Back in 2010, with the considerable help of SOTCW colleagues, I finally managed to get to the table the long-cherished idea of a big game of Rapid Fire based on the US Rangers’ and RM Commandos’ landings on the left flank of the September 1943 Salerno landings.


I needed some extra kit to complete the Ranger battalion I was contributing and so I went out and purchased the Revell US infantry.  I knew they would give me the 50cal HMG and the mortar I needed to add to my Italeri yanks.  What I’d not checked was that the Revell chaps, lovely though they are, are in distinctly wintery garb.  As a result they mostly stayed unused.


Cut to a few years later and I’m in a second-hand bookshop.  I find a copy of Lise M Pommois’ book on the fighting in Alsace over the winter of 1944/45. It’s full of detail and, while I have no plans to wargame Operation Nordwind, it’s from a small French publishing house and I’m unlikely to ever see another copy on sale.  I grab it.


Later still, a family holiday is mooted.  After surprisingly little discussion we settle on a week in the Northern Vosges region of Alsace.  It’s a lovely place and I especially enjoy our visits to the Maginot line at Schoenenbourg and to the magnificent 18th century Citadel of Bitche.


All goes quiet until a couple of weeks ago. Tom Davis has borrowed and now returns my copy of this Osprey book: 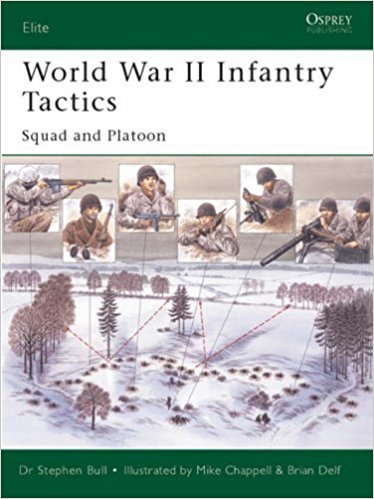 I looked anew at the cover and thought, “I could use those old Revell figures and do a winter 44/45 platoon for Chain of Command!”


Looking at the platoon organisations for the Americans in the rules, though, I’m short of about a dozen riflemen so I go back to the model shop that provides for my plastic soldier needs.  They haven’t got the Revell winter Americans but they do have a similar pack from Italeri.  I take them home.


The Italeri chaps prove a very good match for the Revells in terms of stature and sculpting style so I’m happy.  But what’s this?  Three of the figures are armed with the rather rare M1919A6 .30cal light machinegun with bipod.  Who were they issued to?


Well it turns out there are two US army divisions that get the M1919A6.  One of them sees action in Brittany in summer ’44.  The other is the 100th Infantry Division.


The 100th Infantry Division?  What can I find out about them?  Well, they saw action in the Vosges during the winter of 1944/45, they stood up to German attacks during Operation  Nordwind and they are now known as the Sons of Bitche because of their fierce fighting for that town in early 1945.


I think my destiny is clear don’t you?
Posted by Counterpane at 7:21 AM 1 comment:

I think we're close enough to count this as a Christmas game for 2017 don't you?

Gus and Arthur came over on Saturday to join Charlie and me in a game of X-Wing.  I planned a scenario to take advantage of the models I own.  The Empire was launching a strike on a rebel base.  To complete the mission they had to get a strike package off the far end of our nearly six foot long table. 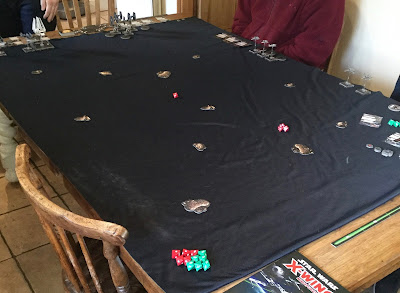 The strike package consisted of two TIE Bombers with a Lambda class shuttle as electronic warfare support.  Escort for the bombers was in the form of four TIE fighters from the Black Squadron under the command of Gus.  I ran the bombers as it was easier than explaining the bombing rules to someone else at the start.

I kept the TIE Fighters pretty vanilla so Gus could concentrate on flying them in what was only his second game.  The TIE Bombers were loaded down with exciting ordnance including concussion and fusion bombs, which I was keen to try for the first time.

Of course the strike mission had to get through an asteroid field to get to the mission location.  The Rebel forces could come on from any of the other three edges of the table.  Charlie picked three Z-95 Headhunters while Arthur had Luke Skywalker and his rookie wing-man.  Again, for ease of play I avoided too much in the way of enhancements to these ships, though some of the pilots had spiffy abilities.

The Rebel leaders chose to both come on from the same edge...

The Rebels seemed to be a bit hypnotised by the bulk of the Lambda class and concentrated their attacks on it. This left the faster TIE Bombers free to make a dash for the bombing line. 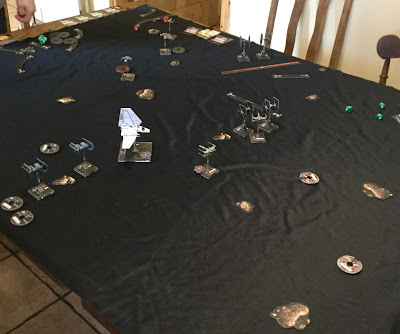 Luke's wing-man seemed not to have paid too much attention to the "wing-man" part of his brief and proceeded to get well stuck in going after the Lambda class.  This left Luke to deal with two TIE Fighters. 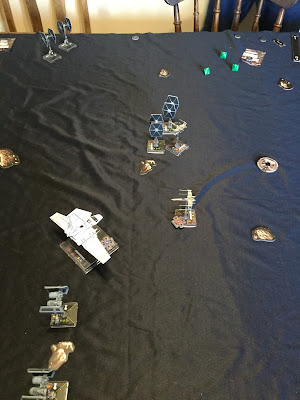 In the picture above the TIE Bombers are at the half way mark and there's no-one handily placed to stop them so I decided that Han Solo and Chewbacca should intervene.  The Millennium Falcon entered from the edge nearest the Empire's objective.

Just as the shuttle had attracted fire from the Rebels, so the Millennium Falcon was a bullet magnet (plasma magnet?) for the Empire forces.  Gus developed a tactic of throwing TIE Fighters into the path of the Falcon to keep it from firing while I shot at it with missiles and dropped bombs in its path!

In the pic below the Falcon has already met an explosive end!  Also Rookie Pilot (who seemed to be something of a bomb magnet) has joined Han and Chewie in being spread thinly across the Galaxy Far, Far Away.  Quite frankly I detected but a minor disturbance in the Force.

As you may notice, there are two Z-95s and an X-Wing (Luke) on the shuttle's tail.  Just moments after this was taken the shuttle also broke up in a flaming ball of expensive special effects. 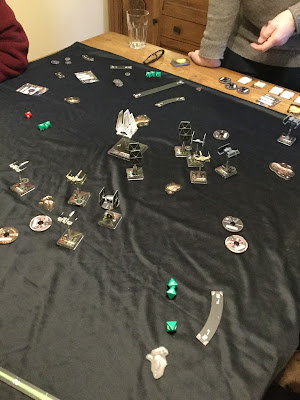 However, next move the Bombers were off the table to give the Empire a marginal victory.

On the whole, I'm not entirely unhappy with the scenario balance.  I wasn't sure how many players I was going to get so I broke the available models into roughly similarly pointed packages.  We ended up using five out of the eight.

I have to admit that the Bombers did get rather more points as they were supposed to be the number one target for the Rebel side.  If the Rebels had started from both sides of the table they would have had more chance of slowing down the TIE Bombers.

An enjoyable game and we finished in time to get in a couple of games of Tsuro afterwards.  My thanks to the players; we must do this again some time!

Posted by Counterpane at 2:38 PM No comments:

Email ThisBlogThis!Share to TwitterShare to FacebookShare to Pinterest
Labels: X-Wing

On Friday evening I took a couple of boxes of tanks and some terrain down to the Christmas Fair of the local primary school and gave my simplified tank game another run for its money.


This time I planned a simple campaign with up to four stages.  In the first game the Germans had to cross the remains of the Soviet minefield and get off the far end of the table.  If they did so the Soviets wouldn't have time to blow the bridge in the second game. 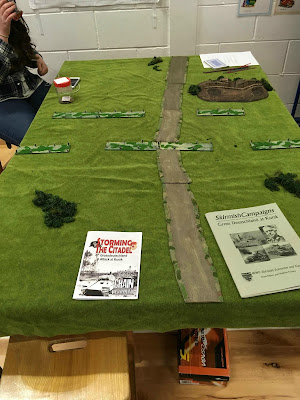 In the event the Germsn managed to get a few tanks through the minefield belt but didn't penetrate to the edge the table.


As a result the following game saw the bridge destroyed.  This was a more exciting affair.  There were no fewer than three German tanks within a move of the far table edge when the last card came up.... 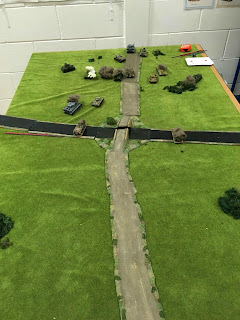 ... unfortunately for the Germans the last card to come up was a red so they didn't quite make it.


And that was it.  Sadly I didn't have time to take any more pictures.


The kids had a good time and we raised over £20 for the school which can't be bad.

Posted by Counterpane at 6:39 AM 2 comments:

Chris Barnes came over on Wednesday evening and I introduced him to Arc of Fire to give him a chance to use his new Cold War-period British platoon.  Chris is building Berlin Brigade models so a Berlin-based scenario was called for.

I designed an introductory scenario in which a KGB operation to snatch back an important defector from under the noses of British intelligence has gone wrong.  At the start of the game the KGB snatch squad is heading for the Wall (the Anti-Fascist Protection Rampart if you wish) at Potsdamer Platz where a VDV Spetsnaz team waits to activate the emergency extraction plan.

Fortunately for the British a platoon from 1st Bn Royal Hampshire Regiment (The Tigers) is patrolling nearby in the Tiergarten.  Even more fortunately, I forgot the scenario set-up I myself had written and allowed Chris to deploy his men well forward through the wooded area instead of starting them from the edge of the board.

This meant that Chris was able to open fire almost immediately on the fleeing KGB team who had the drugged defector in the back of their Volkswagen.

This fire proved to ill-advised in the extreme. Three rounds from the fusillade of shots found their mark. All three of them hit the defector killing him instantly.  In that first moment Chris had technically lost the game!  However, he could at least prevent the KGB agents from escaping.


As the KGB agents got out of the immobilised car, their would-be rescuers arrived by truck on the eastern side of the Wall.  This was a first chance to use the enormous 8-wheeled truck I got from The Works. 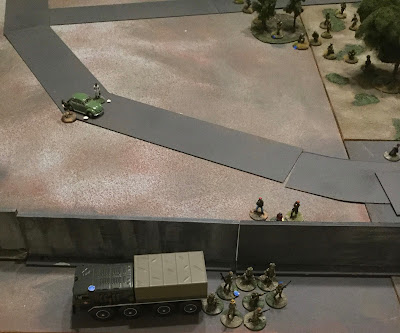 A shaped charge was rapidly placed and exploded... 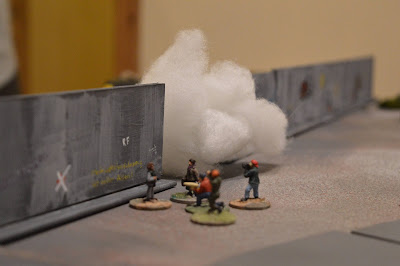 By this point the KGB agents had taken cover behind the VW but the incoming fire from two British sections and the platoon HQ's 51mm mortar was too much. 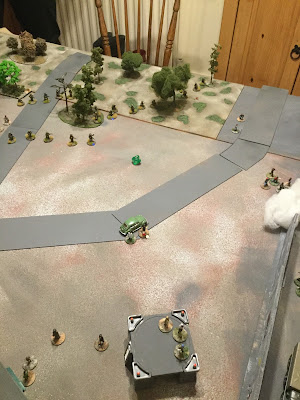 The female agent was killed but her male colleague made a successful dash into the frightened crowds milling about around the viewing platform.

At this point it became apparent that my initial error in the British set-up meant that the game wasn't going anywhere.  With an entire platoon's SLRs aimed at the breach in the Wall any Soviet attempt to move through would be suicidal.  We agreed to wrap it up there.

It was nice to get some new toys on the table and I was reminded how much I enjoy Arc of Fire.  With over thirty games played or umpired it's well clear in second place (behind HOTT) in the list of my most-played games.
Posted by Counterpane at 6:24 AM 8 comments: