I thought I'd post some more of the photos I took during last month's Woebetides game "A Bridge Too Far Up-River.
In the pic below we can see the French arriving on the banks of the Borno River, right next to the British bridge. Kulwin Bey's sepoys have landed on the near bank whilst the larger group, under de Frou-Frou are making their way to the bridge on the far side.
"Longue" Jean Argent can be seen in front of the mast of the lead dhow. 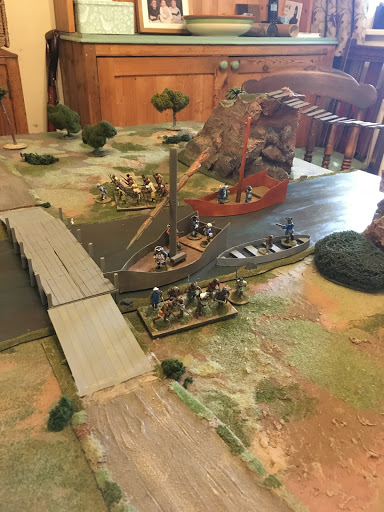 This later picture shows the bridge demolition under way. Well underway, in fact; the two dice next to the bridge mark the French sappers' progress with their task.
In he foreground, the French marines under Lt Perbais have fallen back on their boat with a lot of Shock. 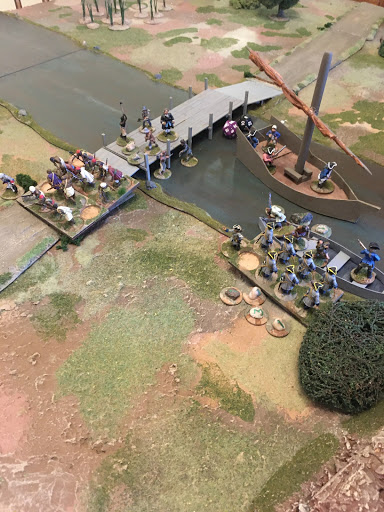 Finally, and I'm not sure why I omitted it from the original post, here are Ensign Tom Laine and his chaps scaling the western crag.  Sadly they were too late to prevent the French escaping! 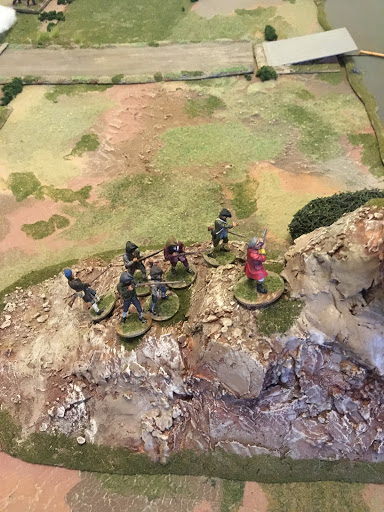 Posted by Counterpane at 1:00 AM 4 comments:

My latest adobe house for Mexico or Pavis (or possibly the Woebetides) is now complete.  It's another based on the skeleton of an iPhone box, see the previous post for construction details. 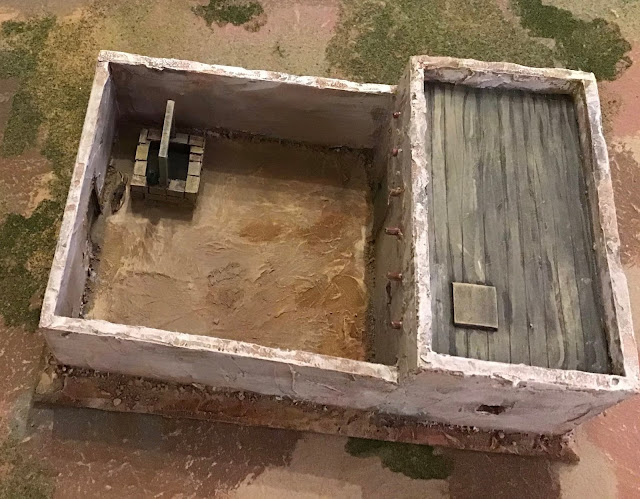 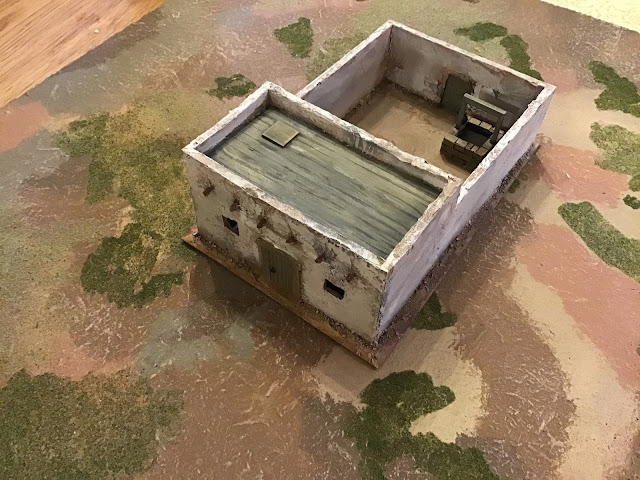 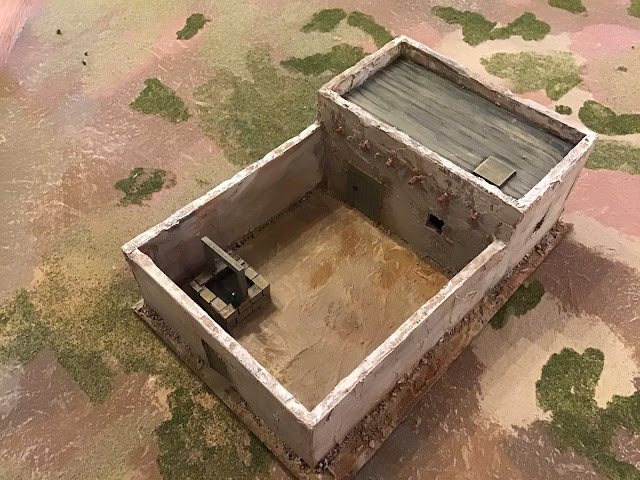 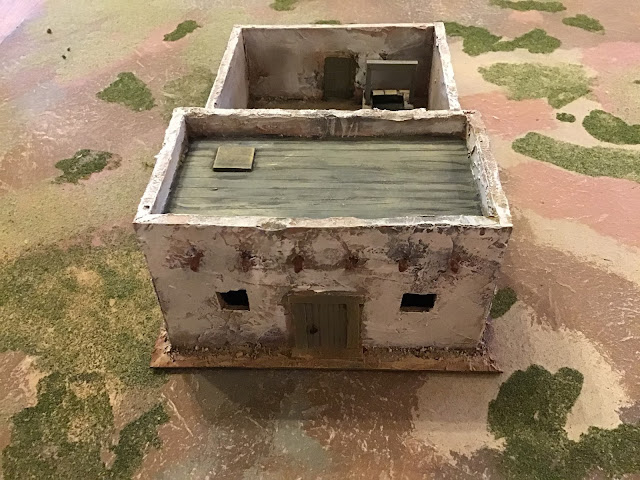 Posted by Counterpane at 2:37 AM 2 comments:

Tidying up the piles of crap in my workshop on Friday evening I came across a nice, strong box that was just crying out to be used to store a 28mm scale building. In a rush of creativity I cut out and chamfered the edges of a sheet of PVC board to fit in the box and super-glued onto it a building I'd started weeks ago.

The  building is yet another adobe house made from a no-longer-needed iPhone box. These boxes are strong with clean lines unspoilt by visible folds or seams.  I added a small foam-core wall around the roof. 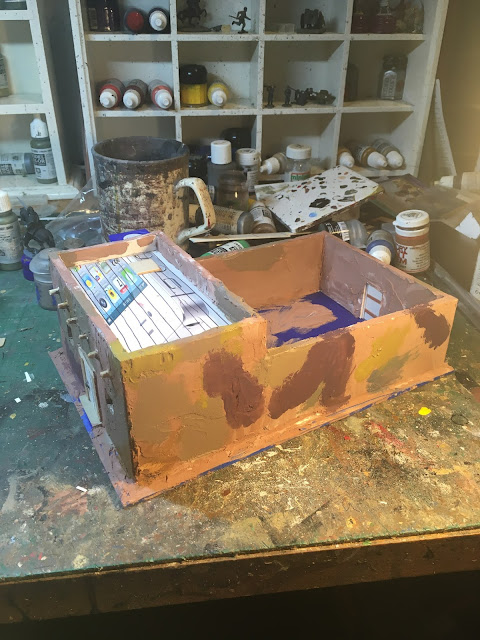 As you can see, I also scored planks into the roof, added a courtyard wall from more foam-core and coated the whole thing with Tetrion filler coloured with acrylic paint. 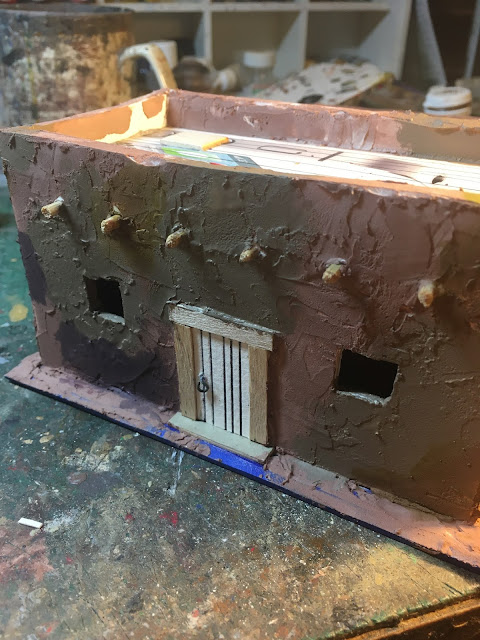 The courtyard door I made from plastic card because both sides would have to be visible. The other doors are thin cardboard with coffee-stirrer jambs and lintels and twisted wire handles. Lengths of bamboo skewer form the roof beams.
To provide some visual interest in the rear courtyard I built a well out of foam-core, thin card and leftover bits of MDF. 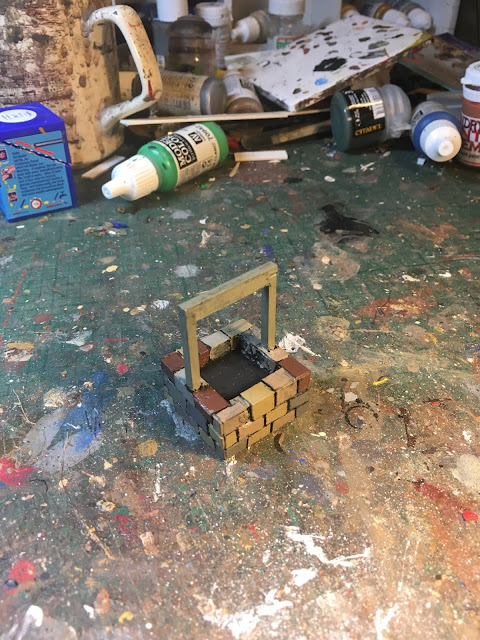