I'm considering my dockside buildings for the Woebetides to be complete. 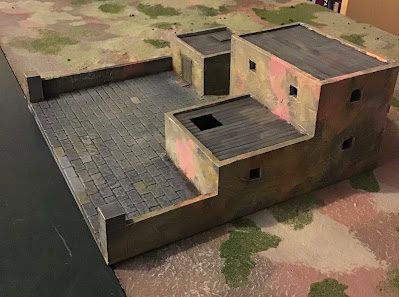 As seen in the in progress post, they are built from foam core with the stone quayside from textured XPS foam from Firedragon Games. I got the foam in their original Kickstarter and it's blue. I believe their now using a black or dark grey colour. I struggled to cover the blue colour so I think that'll be an improvement. 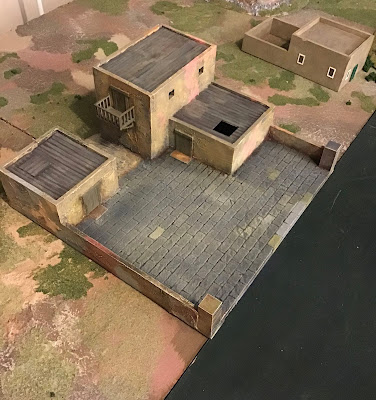 The picture above shows the latest piece alongside a 20mm scale building I did years ago for the Woebetides. My technique has developed somewhat over the years!

Posted by Counterpane at 3:00 AM 2 comments:

Yet another Sharp Practice project!

I suspect therapy is called for. Whilst busy preparing forces and terrain for Crisis Point's foray into the Indian Ocean in the early eighteenth century I'm feeling an urge to build some Napoleonics in 28mm!

The obvious setting for Sharp Practice Napoleonics is the War in the Peninsula. It goes on for long enough and covers a sufficiently broad geographical area that it's not difficult to shoe-horn in small fictional actions or even campaigns. However, I've done the Peninsula in 20mm and I'm not keen to do it all again in a new scale.

An old magazine article did have me considering the fighting around Malborghetto as the Austrians withdrew across the Alps pursued by a French army in 1809. The heroic Austrian defence of the forts would make for a spectacular one-off show game but again the short period of time (to say nothing of the need for space-consuming terrain) counted against this option.

In the end I think I'm going to look into the 1812 campaign in Livonia and the siege of Riga. Some of you will be aware that I have an interest in Latvian history having visited the country some years ago. I'm confident with little more investment than in a couple of boxes of plastic figures I can get some interesting games going.

When Napoleon marched into Russia in 1812, he ordered X Corps under MacDonald to march north and capture Riga and then threaten St Petersburg. X Corps was made up mostly of Prussian troops reluctantly allied with the Corsican Ogre. This means that I can wargame the 1812 campaign with no snow and with Russians and Prussians as the forces involved! This appeals nicely to my liking for the more obscure subject matter.

The Black Powder source book "A Clash of Eagles" has provided some basic background information and I'm also revisiting an old friend for more ideas: 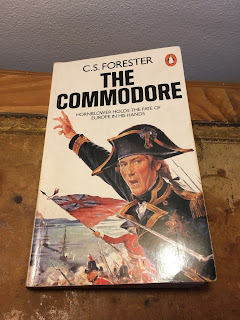 There are a number of inaccuracies in the book but it's still a damned fine adventure, rich with ideas that will transfer well to the table top.

Also inspiring is this: 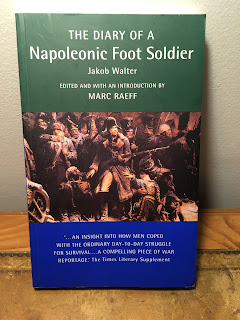 The diary of a Würtemburger infantryman, it covers campaigns against the Russians in 1806, Tyrolean insurgents in 1809, and the Russians again in 1812. Most of the book is taken up with the author's experiences during the march to and retreat from Moscow but there's still enough about the experiences of an ordinary soldier to be really helpful.

When I get to Wargames Emporium next I think I'll pick up a box of either Prussian or Russian infantry and start building. This will hopefully be a low-impact project. I don't intend to spend lots of time building dedicated terrain and things like wagons and mule trains can be recycled from the Woebetides or Mexican collections.

This guy is going to serve as M. Choufleur, the French senior engineer. He'll have a couple of important jobs for the French over the weekend of Crisis Point. 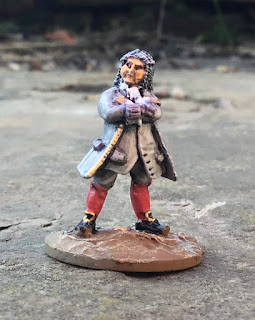 Choufleur is a younger son of a senior officer in Louis XIV's guard. The younger Choufleur is fascinated by science and engineering and despite the father's wealth and influence he has signed on with the East Indies company. He's a good looking chap but is a rigid disciplinarian who takes pleasure in having malefactors thrashed. As such he is hated by his men.

Posted by Counterpane at 2:35 AM 2 comments:

One the workbench - dockside buildings

The last Woebetides test game made me realise that I don't have any dockside terrain pieces. As at least five coastal towns are likely to be needed in the game, I thought I'd experiment with making something appropriate.

The problem with building a quayside is that unless you are building your terrain using some kind of modular system, it's not usually possible to have the general land area of the table higher than the sea areas. You're likely therefore to need a step up to the quayside from the surrounding terrain.

I thought I could probably make this less obvious by surrounding my quay with walls and buildings at the edge of the terrain piece.

I have some sheets of stone-block-textured blue foam that I got some years ago from a Firedragon Games Kickstarter. I also had an off-cut of PVC board that was just a little larger than a single sheet of the blue foam (about 11 inches square). This gave me the opportunity to have a sloping entranceway at the rear of the dock area.

The piece is at an early stage - a couple of sessions' work so far.

I started by cutting the baseboard to size such that it was a 5mm wider on each side than the blue foam. I glued the side walls in place and then built up the buildings, hot gluing them to the PVC base. I then trimmed the blue foam to fit and glued it down. Further trimming allowed for Lego pillars at the front corners. 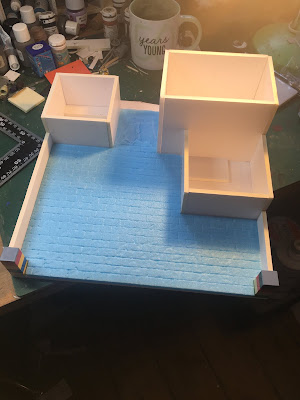 I cut and sanded an earthen slope to the rear of the base between the buildings. 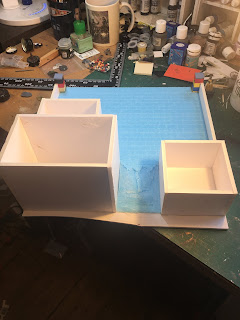 When the buildings' basic structures were dry (I'd glued them with PVA using map pics to hold them together) I started to add details.
The roofs are scored, thick card. I've added doors from various thicknesses of cardboard and a laser-cut MDF balcony from Warbases. 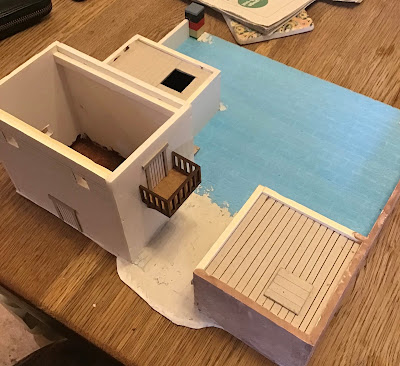 I've also textured the rear slope and some of the walls with Tetrion. 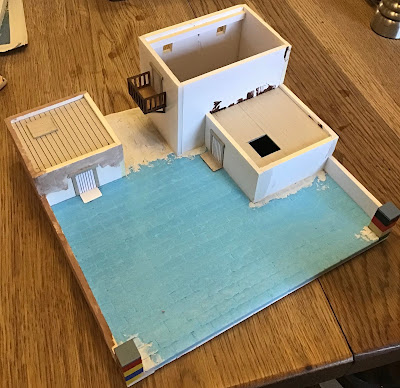 It's not really visible in the pic above but I've extended the gaps between the stone blocks down the front edge of the blue foam and the exposed PVC board at the front.

The next steps are to cut through some more windows, possibly adding (brass rod) iron bars, add more texture with Tetrion, and then paint a little PVA along the bases of the interior walls before sprinkling on sand. I might add a wooden bollard or two along the front edge.

I'm trying to keep the final article suitable for the Woebetides, for Mexico, or for Pavis.

Posted by Counterpane at 3:22 AM 4 comments:

Just after Christmas I ordered a couple of packs of figures from Old Glory to add a few interesting characters to the Woebetideus collection.  A pack of Pirate Artillery provided me with two ship's guns and their crew and these saw action in last weekend's Sharp Practice game.

I've also finished painting most of the pack called "Island Governors". This has proved ideal to provide figures for those Woebetides characters who aren't part of any individual player's force but whose presence will add considerable to the atmosphere of the game.

First up we have Mr Sidney Ruff-Dymond, the British Factor: 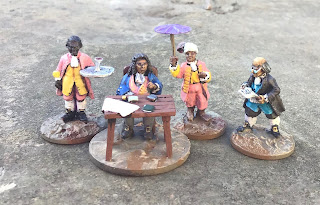 Ruff-Dymond's French opposite number is the comptoir.  Anne, Comte de Pommefrite is the senior officer of the French East India Company in the Woebetides. He is proud of his red suit (in the latest Parisian style) and insists on wearing it for significant occasions. No-one has dared to point out to him its similarity to the colours of the British troops (of Lord Custard's Regiment) stationed in the islands. 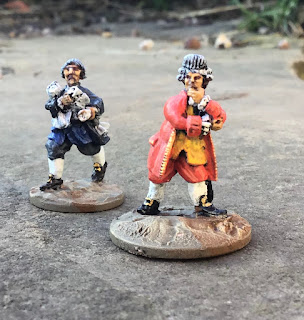 There are a few more figures in the Island Governors pack and I'll reveal them when I've decided who they are to represent.

In addition to these civilian types I'm also accumulating additions to the various military forces. Inspired by Richard Phillips's use of Numidian bodies among his Woebetideus, I made this fellow: 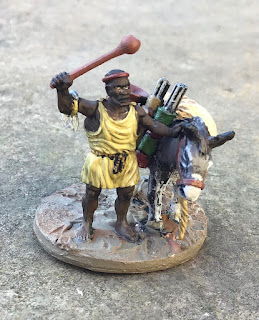 The body is from the Numidian crew of a Victrix elephant. His head and his right arm are from the Warlord Zulu Impi. The donkey I found when scrabbling though a box of assorted figures at a show somewhere (remember them?) and its load is from various other sets. He'll provide one of the Woebetideus forces with the option to resupply with water and/or ammunition should the situation require it. 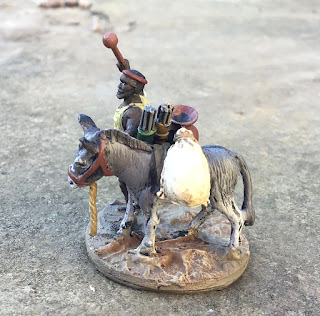 Posted by Counterpane at 9:20 AM 3 comments: