I'm planning on running a two part Pulp Alley campaign on New Year's Eve and having finished Friday's Arc of Fire game early, we decided to get in a practice session.

We used a couple of Leagues (as Pulp Alley forces are called) I've put together from figures given to me by Alan Slater.  Richard used the Cybermen and Andy the crew of the Heart of Gold from the TV series of the Hitchhiker's Guide to the Galaxy.

Not many pics of this game, I'm afraid.  Pulp Alley moves so fast that it's easy to forget to take photos as you go along.

I was very impressed with how the Cybermen functioned as relatively slow-moving but powerful fighters.  They were also nearly invulnerable to attack; just as they should be.

In the end, though, the faster moving and more numerous humans (if Zaphod and Ford meet that description) managed to achieve more of the Plot Points and so won the game (by 5 victory points to 2 if it matters).

Posted by Counterpane at 2:57 PM 3 comments:

I usually try to get a couple of all-day gaming sessions in over the Christmas/New Year holiday period. Tis year's first session started of with a play to play some Arc of Fire in preparation for this year's big Crisis Point game.  In the end we also got in a game of Pulp Alley too.

The Arc of Fire game was to practice house-to-house fighting in Tcherbevan.

Jamie and Andy played the Andreivian Turks whilst Richard and Ron played the Andreivian Armenians.  Both sides had a platoon of militia types. The Turks, thanks to their highly motivated foreign volunteers, having slightly higher morale.  I also gave the Turks some additional forces to reflect the fact that they were to be on the attack.

Jamie launched a squad of Mujahideen in an unprepared attack on the southern end of the large building, which was held only by a unit of three Armenian combat engineers.  Unfortunately for Jamie, Richard rolled very well and the Mujahideen took heavy casualties. 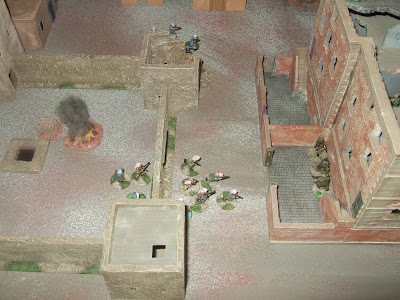 In the northern half of the board, Ron had an Armenian militia squad and their HQ unit.  He was faced by Andy with a sniper team, a tank-hunter team, and a "technical" in the form of a pick-up truck mounting a 40mm auto grenade launcher. 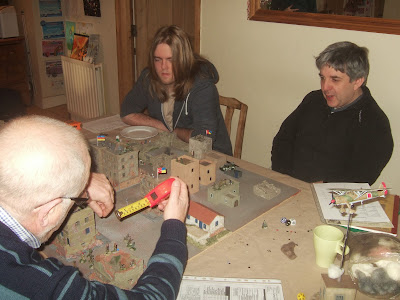 Andy advanced the technical but it came under heavy fire from the large building and the crew were killed. 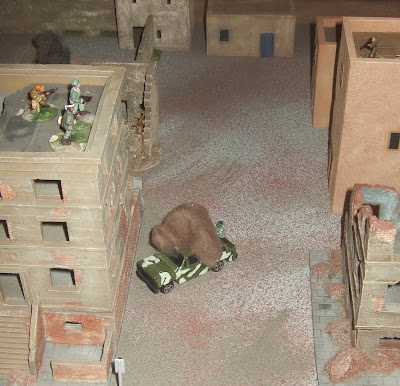 Jamie managed to get his second squad of Mujahideen into the large building... 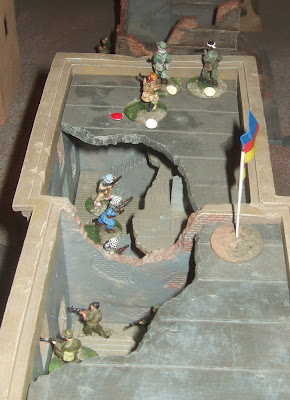 ... but they lost the ensuing firefight and we decided to call it an Armenian victory after three turns.

News of the Pulp Alley game next....
Posted by Counterpane at 6:04 AM 2 comments:

Something for the Pigeons

Further progress on the statues shown in the previous post.  I decided to have a go at applying a verdigris layer in the form of a wash of very tinned paint (white with a little green and blue): 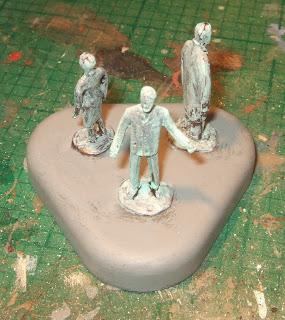 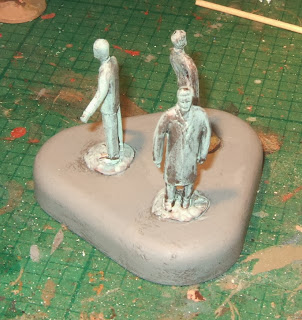 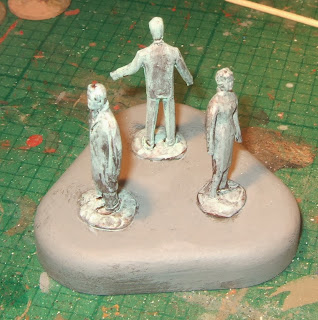 I shall have to try a little more detail to get the look quite right.
Posted by Counterpane at 3:03 PM No comments:

On the Workbench - More Andreivian Stuff

A trip over to Merseyside at the weekend yielded nothing useful from the Wargames Store in Brimstage but I did get over the the model shop in Birkenhead where I picked up some air support for the Andreivian Armenians: 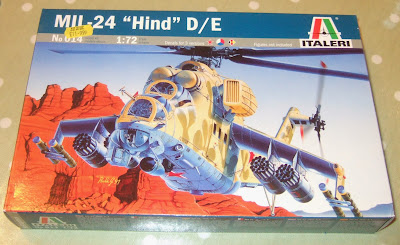 Following my recent test of the available urban terrain for Tcherbevan I've decided I need some bits of decoration to make the spaces between the buildings look like real streets.  Some 40mm tall architect's models and a piece of plastic packaging are on their way towards making one of those uninspiring pieces of public art so beloved of eastern bloc town planners. 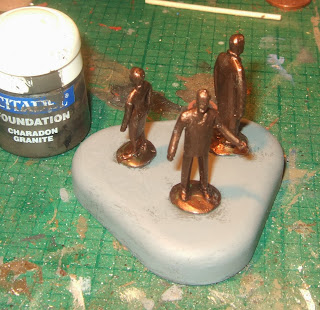 Posted by Counterpane at 1:36 PM 2 comments:

This 20mm scale barn is the latest of my ventures into foamcore architecture.  I originally envisaged it being used for games of Sharp Practice but I reckon it will probably see use in Andreivia too. 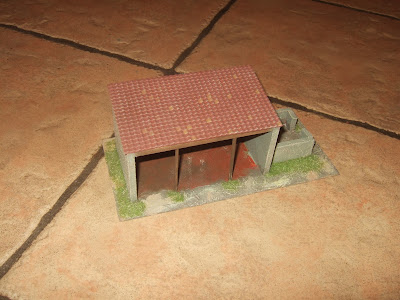 The walls are foamcore with the exposed edges covered with tilegrout and then the whole painted with exterior masonry paint for texture.  The tiles are Wills textured plasticard. 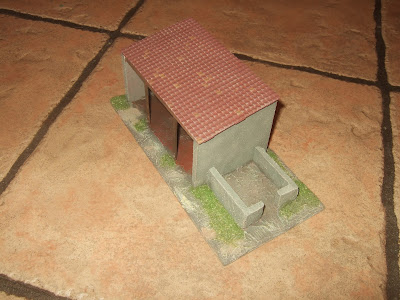 The base is thin MDF.  The uprights are bamboo barbecue skewers smoothed to an approximately square profile and the beam along the front edge of the roof is a strip of balsa. 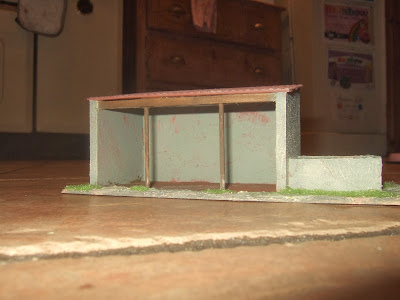 As per my usual policy, the building was designed to fit an available storage box - in this case one of the sturdy cardboard boxes our pay slips arrive in from the outsourced payroll contractor! 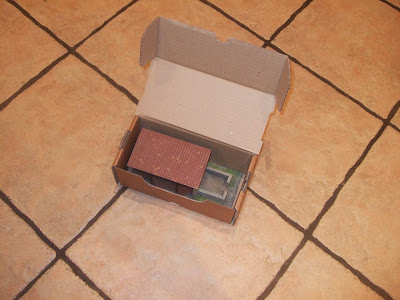 Posted by Counterpane at 2:37 PM 3 comments:

Having completed the batch of middle eastern houses I was working on, I thought I'd have a go at laying out a possible configuration for the sector of Tcherbevan I'm building for the big Crisis Point game in April next year. 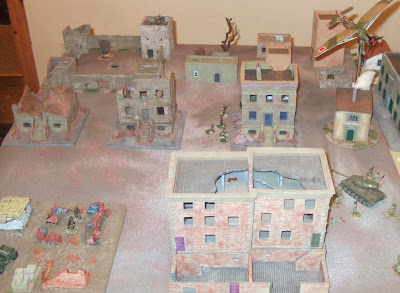 The plan is to portray a central boulevard lined with more or less ruined buildings.  Among others I'll be using the Museum Miniatures resin buildings seen in the foreground and middle distance above for this purpose. 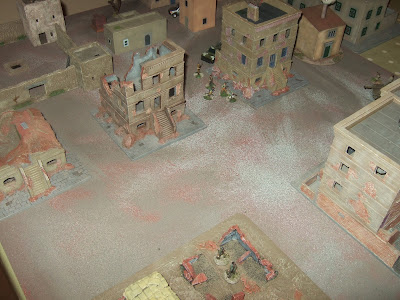 Either side of this central no-man's-land will be the Turkish Quarter (background above) and the Armenian Quarter (not in these photos as I didn't have time to set up a 6' wide sector). 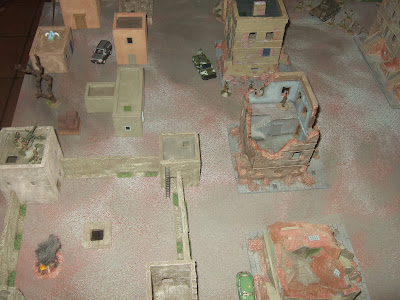 The left side of the picture above shows the Turkish Quarter as it exists so far.  Bottom left is The Old Fort - I have the model so it seems reasonable for Tcherbevan to have one.

Posted by Counterpane at 6:39 AM 2 comments:

This isn't going to make much sense to those of you who aren't familiar with Groo the Wanderer.  Sorry!

Among the treasures lurking in Tim Gow's second box of delights were some Groo miniatures produced some years ago by Dark Horse Miniatures. 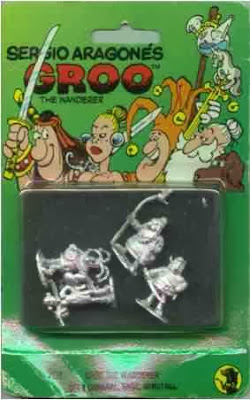 In theory the set includes Groo, Chakaal, the Sage, the Minstrel and Groo's dog Rufferto.  And very nice they are too except that Rufferto doesn't quite capture the original's mongrel look. 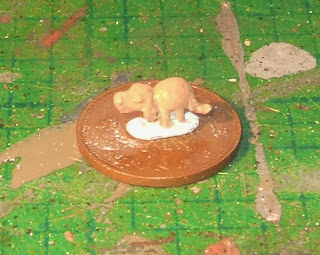 And the answer is, that's because it isn't Rufferto... 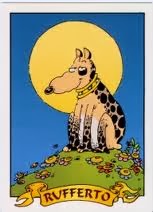 "What does 'mulch' mean?" being a running joke in the Groo comics.

I've started painting the figures with a view to turning them into a somewhat off-the-wall Pulp Alley league or Song of Blades and Heroes warband but it looks like I'll have to sculpt my own Rufferto.

Posted by Counterpane at 3:24 AM 4 comments: