New venue for games at home

I've been introducing a group of friends to Sharp Practice played by Skype. As is so often the case the game takes longer to play and so far we've set the game up twice on the kitchen table and had to take it down afterwards. 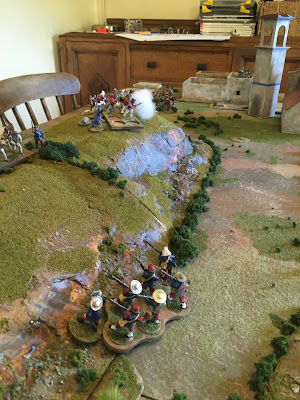 As we are going yet again with the same game I finally cracked and decided to invest in some folding tables that would fit over the bed in Charlie's now-unused bedroom when in use and could be stored under the bed when C comes home for the weekend.

A bit of research soon pointed me to Hartleys Direct and I picked up a pair of these. 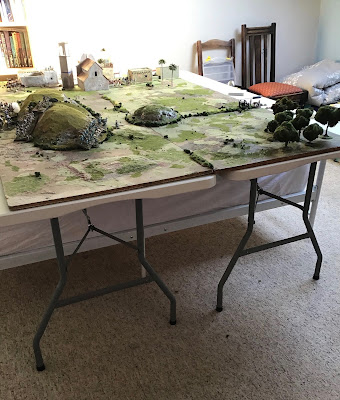 They were £35 each and I have to say I'm hugely impressed for the price. They arrived, in about four days, very securely packed. Years ago I used to use a pair of pasting tables but they were horribly wobbly and had an annoying habit moving at the slightest touch. These new guys are as stable as you could wish. 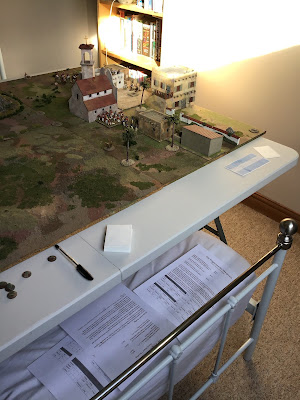 My 6'x4' of terrain squares overhang by about an inch and a half lengthwise and the two tables together are 11 inches wider than the 4' dimension. Of course I could get more width by leaving a gap between them if I'm using boards on top.

The corners of the tables are rounded so if I use a terrain cloth on its own there'll be a couple patches of quicksand in the middle of each end of the table! I'll have to remember to put down some terrain pieces to bridge the gaps.

Folded they will fit neatly under the bed.

The same design of tables (or something very similar) are used by the school whose hall we use for Crisis Point. We can have an even-more-stupidly-huge table at next year's event.

Posted by Counterpane at 2:06 AM 3 comments:

For reasons too trivial to go into, I track my progress painting models and building terrain for wargames on the basis of a year that starts on 1st September and ends on 31st August. This year has been pretty damned productive, though I do say so myself.

I keep a diary of items bought and items painted sorted out into broad categories. I try to always be in credit, as it were, in each category at the end of each year. This year the category totals were as follows:

The building of models for Mexican and Woebetides Sharp Practice games has been a focus this year. 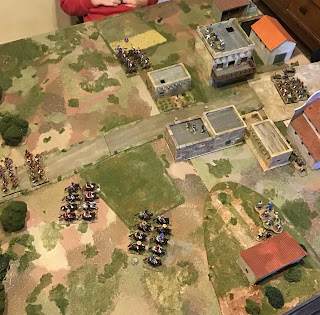 I also completed the portable battlefield for the Lützen let's-have-a-game-we-can-play-down-the-pub game just in time for a nationwide closure of pubs! 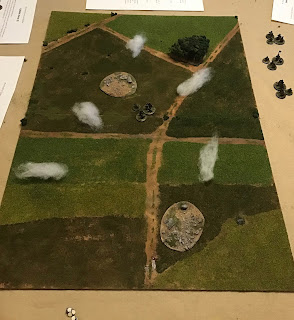 On a similar basis I completed 9 game markers and stands of various kinds (against none purchased all year).

In previous years 6mm vehicles were a major focus but this year the only real attention they got was the brief flirtation with Future War commander in July-August. I bought and painted a single pack of Baccus grav tanks before we deiced 6mm FWC didn't work for us as a game-by-Skype. 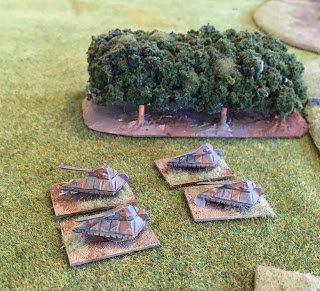 The 27 new units' worth of figures are some Baccus scifi chaps I bought at the end of June whereas the painted units were mostly Catholics and Swedes for Lützen, bought before and painted shortly after the start of the wargaming year.

Future war Commander models again! My two gunships were converted from very old, and not very authentically sculpted, Hind gunships I'd acquired years ago in a cheap eBay assortment of 1/300th scale models. Likewise the delta-winged strike aircraft that appeared a couple of times with the government forces in our Pynchan games was a cheap, polythene model that came out of a Christmas cracker years ago.

15mm really isn't my scale. I have a few figures left over from long ago but I've no plans to add any more. I did however, rebase (yet again) my 15mm Samurai this year.  This time it was for The Pikeman's Lament. A few unpainted figures got done in the progress. 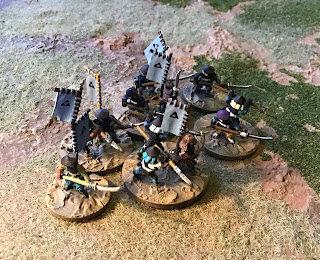 This is a real surprise. In previous years 20mm scale has been a real focus for me. I blame the Too Fat Lardies community for showing me so many really nice 28m figures this last couple of years.  My minor production of 20mm figures this year was to finish off some Eighth Army Indian troops that had been sitting in storage for years.

Hardly worth talking about. I finished an Eighth Army 3.7" Howitzer to go with the Indians and bought and painted a Zvezda Russian 76mm infantry gun.

I dug out of storage and built a DFS-230 glider for the Incident at Fearnley Whittingstall game at Christmas last year. 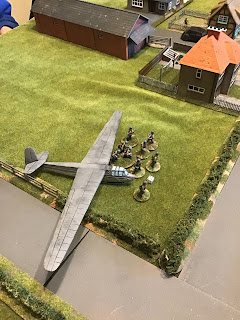 I also bought a De Havilland Vampire kit, which I'm counting here though to be honest it was just bought to while away the hours while my Mum was in hospital and I was stuck on my own at here house. I'll probably finish it one day.

A couple of vehicles for the Woebetides and a pair of pulp-era vehicles got finished this year. I was particularly pleased with my home-made artillery limber. 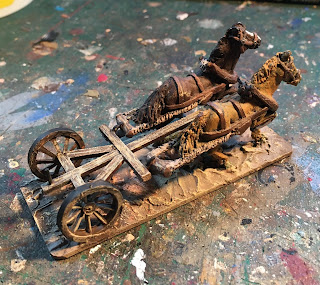 And finally 28mm figures. Oh this is what I've been doing with my time all year!  I haven't reduced the unpainted figure pile by much but 213 figures completed is no small matter.

Plastic figures and the smaller forces required for large-skirmish games like Sharp Practice and Lion Rampant have played a huge role in making 28mm an affordable scale for me in recent years. The smaller number of figures needed and a willingness to accept "wargaming standard" painting have also helped make getting a force "finished" in a reasonable time a realistic prospect. 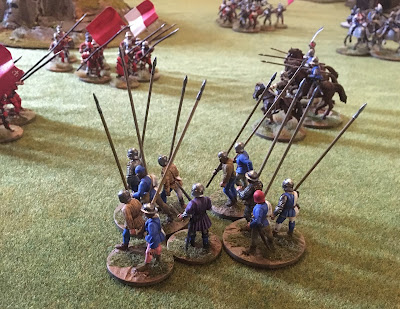 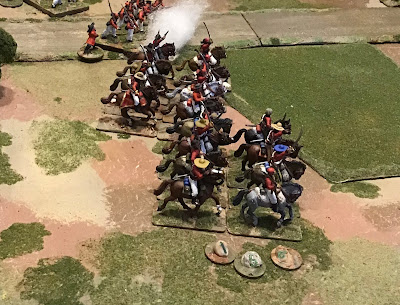 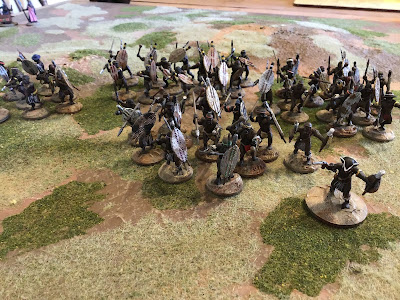 In terms of productivity, I had rather slowed down in the last month or so but in the last few days I've suddenly had a craving to paint late WW2 Germans in 20mm scale. Look out for pictures soon.

Posted by Counterpane at 2:52 PM No comments:

Over the weekend I built a barracoon (slave pen) for one of the groups of Arab trader/pirates in the Woebetides. 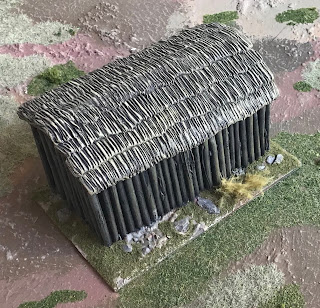 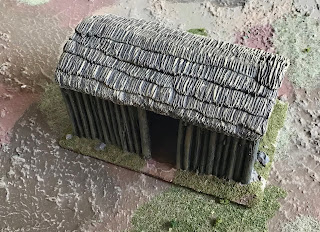 The walls are made from lengths of wicker rescued from a small basket that was going to be thrown out. Lashings of hot glue gun glue were used to keep it together and provide strength.  The roof is sculpted from Milliput laid down in "worms", squashed and sculpted with a knife.

I also made a small marker to indicate the presence of a stash of Woebetideus weapons taken from captured tribesmen. 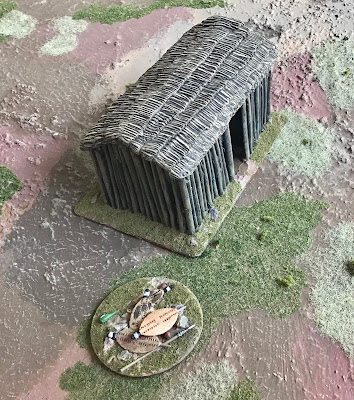 Finally, "Grab a weapon and run!" 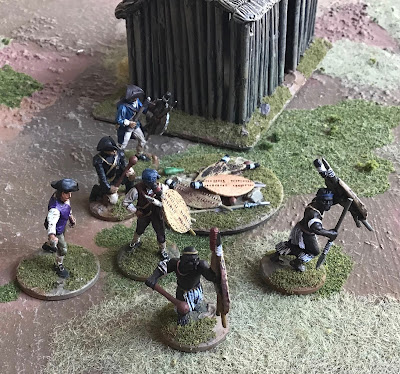 I used some spare bits to create a mixed group of escaping captives. One of the younger players may start off running this group at Crisis Point.

Posted by Counterpane at 5:09 AM 2 comments:

The latest piece of terrain for the Woebetides is this little river island, an eyot if you like. It's made from one layer of foam-core on my usual PVC base material.  A couple of stones from the garden and some tile-grout add the ground cover. 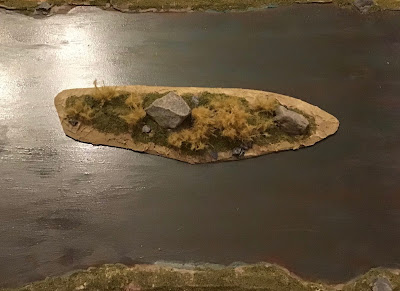 I've added plenty of tufts. One of their purposes is to disguise the presence of a surprise... 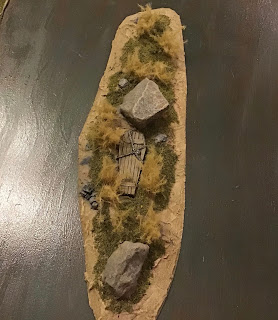 The chained-shut coffin is one of two I got a few years ago. They are from the Malifaux range by Wyrd Games. I'll leave the detail of what's in the coffin for the players to discover.

Posted by Counterpane at 2:34 PM 5 comments:

On the workbench - Some Woebetides Additions

My painting production line has slowed a little of late but I continue to push towards getting terrain done for the Woebetides Islands. Recently I completed a few additions that I then photographed while they were still on the workbench. 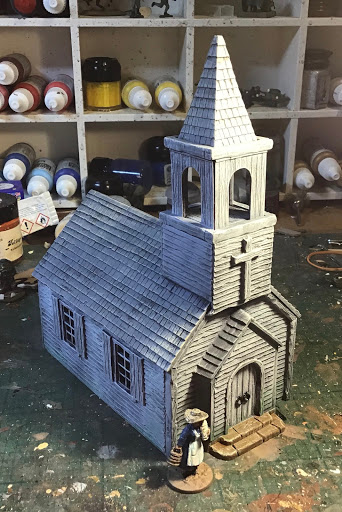 Above is the Renedra American colonial church built straight out of the box and simply painted with successive layers of dry-brushing.  It's not too difficult to put together.  I have a couple of doubts about the west end (not shown in the pic above) - should there be a door directly behind the altar and what's that little window high up and to one side? Whatever, this will do nicely as All Saints' Church, Fort James.

I keep painting civilians for the islands too. These three are from Perry Miniatures' Carlist War range. The clothing styles are probably wrong for the period but I don't think too many people will complain.

I've been using off-cuts of basing material, with flock and tufts, to make small scatter pieces. These serve the twin purposes of disguising joins between base boards and reminding players that the open, flat areas of the table may not be featureless lawns. 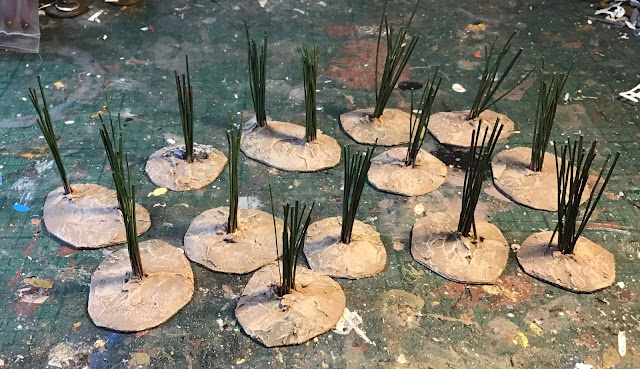 Finally, scraps of artist's mounting board and bristles from a yard-brush made these clumps of elephant grass. Again, helpful for reminding players that we aren't in Kansas any more.