On the Workbench - Wolf Pirate ship

Another evening of sporting success on the radio - England beating India in the 20:20 international - and now I'm making significant progress on the ship that will provide the Stronghold for my Wolf Pirates. 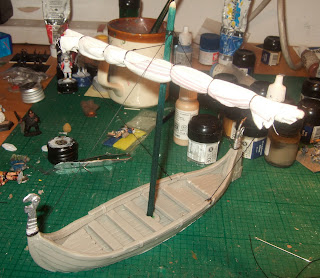 The rigging is very much simplified compared to the Hebridean / Viking knarr that it's based upon.  The sail is made from an old piece of handkerchief.  I had originally planned to paint the sail with PVA to stiffen it and then paint it but I'm quite pleased with the effect as it is.

The model has a rather dodgy-looking rudder with no visible means of attaching the tiller so I've added a home-made Viking-style steerboard made from a carved matchstick and some brass rod. 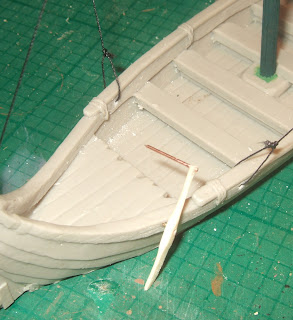 Posted by Counterpane at 1:48 PM No comments:

On the Workbench - those Romans painted

Well that was enjoyable!  An evening by the radio listening to Liverpool beat Exeter City in a cup that some reckon doesn't matter and painting a few figures some would reckon don't really matter. 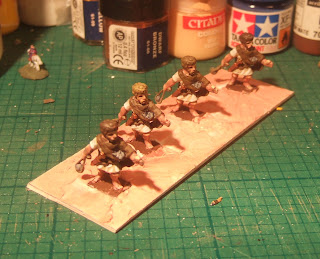 The figures have a few subtle differences in cloak and hair colour that don't really show up in these pics.
They're painted but not yet varnished but I couldn't resist basing them and "glooping" the base with tile grout to see how they'd look as a Basic Impetus skirmisher unit. 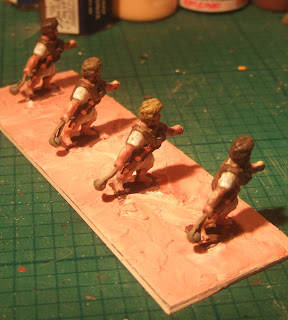 I'm pleased with how these figures look.  Even dashed off in a couple of hours they're better than the previous times I've painted them so I guess I'm still improving!

Posted by Counterpane at 1:51 PM 3 comments:

On the Workbench - some Roman slingers

I fancied a change of pace after rushing to get three HOTT armies finished in as many weeks so I’ve dusted off some very old Lamming slingers.  These guys are some of the oldest figures I own. 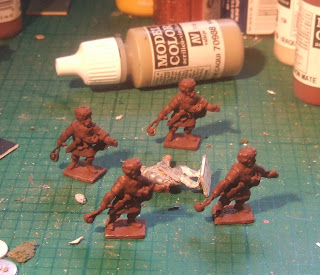 I reckon I bought them in about 1980 from Games of Liverpool when I was still hopeful of getting a WRG 5th Edition Ancients army finished.  They’ve been painted at least twice and rebased several times.  At one point they acquired tissue paper trousers in an attempt to make them into believable later Roman auxilia.  Last year I decided to introduce them to Mr Nitromors, albeit with no idea what would happen to them afterwards.  Perhaps they would go onto eBay? 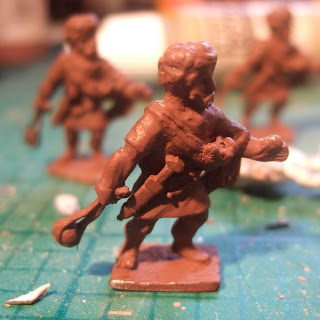 Well, they never made it onto eBay as they are behind loads of old RPG stuff in the queue (and that’s not getting done either) so they’ve just sat in a box until now.  I think it may be discovering Basic Impetus that’s got me thinking about them.  Four of these will make a  nice little Basic Impetus skirmisher unit and that’s about an eighth of the way to a whole army!  I may adopt a fictional approach in the style of Tony Bath’s Hyboria campaign.  If I paint these realistically as, say, Hadrian-period Romans, I can still call them Hyrkanians or whatever and mix them with whatever other figures I can throw together.
I'm experimenting with brown undercoating with these as you can see.  It seemed appropriate given the muted tones I plan to use.
Oh, with these being true 25mm figures and definitely ancients, I've had to add two new labels to create this blog entry!
Posted by Counterpane at 12:13 AM No comments:

In a departure from usual practice I'm revealing in advance my army to appear at this year's Berkeley Hordes of the Things Tournament. 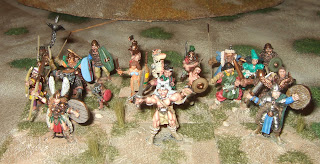 The Wolf Pirates appeared from the uncharted oceans at the end of Glorantha's Third Age bringing death and destruction and heralding the coming of the Hero Wars.  Their leader was Harrek the Berserk (centre  of the front rank above and below).  His faithful companion was the half-Valkyrie Gunda the Guilty (left) and he was sometimes accompanied by Argrath Dragonspear (right) who eventually destroy the Red Moon and become King of Dragon Pass.

The Wolf Pirates themselves were desperadoes from across Glorantha.

In HOTT terms the army is organised as follows:

Gunda's status as a Paladin is justified by the stories of her being unaffected by the magical attentions of the legendary Queen of the Kiss.  In addition, taken together, Harrek as a Hero and Gunda as a Paladin go some way to reflecting the Harrek's powers in the Dragon Pass board game. 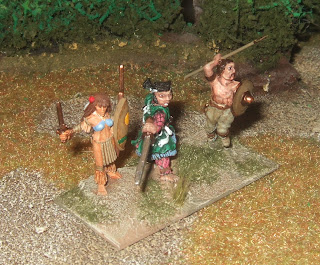 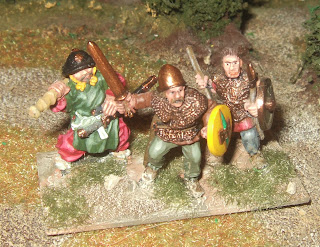 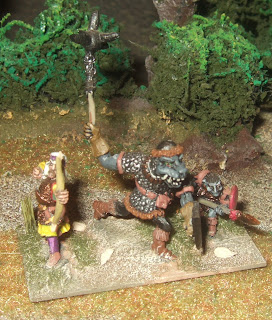 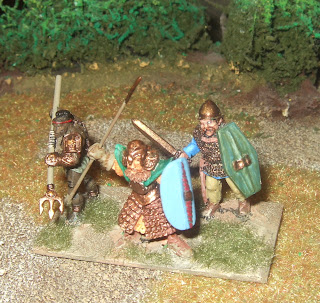 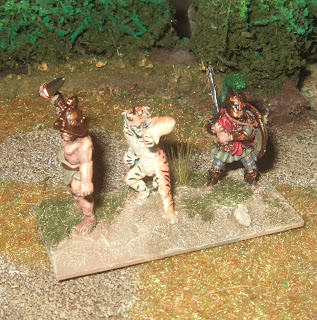 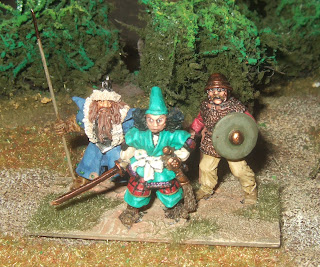 Posted by Counterpane at 2:27 PM 4 comments:

And here are the Reivers that form the other part of the matched pair of 16th century Hordes of the Things armies.

The mounted elements of the army are in two groups - firstly, the Riders.  These are exactly the same as the riders in the Warden's force.  Indeed the men riding in pursuit of these Reivers may be riding on their own raids in a few days' time. 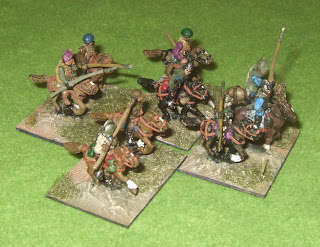 Next come the "loaded" Reivers.  These guys are weighed down with plunder.  They count as Beasts under the HOTT rules.  They move quickly through the rough going of the Border hills but are at a disadvantage if caught in the open by enemy riders.  The figures are converted from the East Riding Miniatures originals by the addition of plunder (mostly from Green Stuff) and a few new arms (ditto). 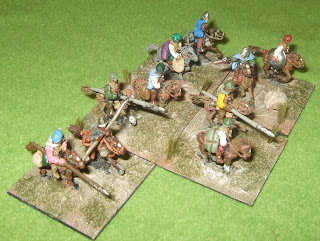 Next we have a storming party with ladder and torch.  They could be aiming to come through the roof of a bastle house or to burn down its door.  Or perhaps they plan (like the Bold Buccleuch) to rescue a prisoner from Carlisle Castle? 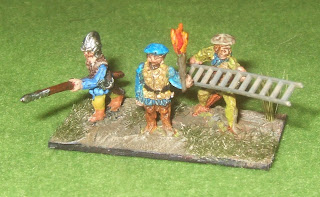 Finally, for the fighting forces, we have three elements of Lurkers (in HOTT terms).  Pursuers of a Reiving party were all too likely to find themselves ambushed and the tables turned. 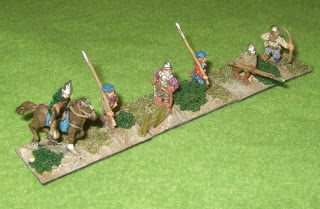 And last of all; every HOTT army needs a Stronghold.  In this case, what better than the Reivers' ill-gotten gains? 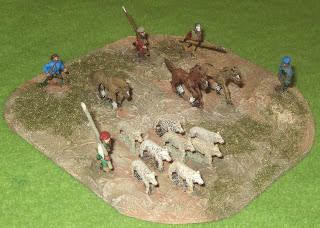 The subject line, by the way, is from the Bishop of Glasgow's "Monition of Cursing" against the Reivers - excellent stuff.
Posted by Counterpane at 1:59 PM No comments:

Well it's been years but they are finally finished.  This is my 16th century Warden's Men army for Hordes of the Things.  It represents a "Hot Trod" organised to pursue a band of Reivers that has "lifted" goods and animals from a village somewhere in the Anglo-Scottish border region.  Click on any picture to enlarge.

The army consists of:
7x Riders (including General)
1x Beasts (the Warden's slewe dogges)
2x Warbands (plumps of watchmen)
2x Shooters (more watchmen with longbows)
Here are the Riders.  Almost all of the figures are by East Riding Miniatures in 15mm scale. 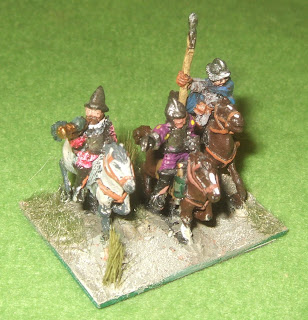 Here are the Slewe Dogges (slewe is from the same root as the word "sleuth"). 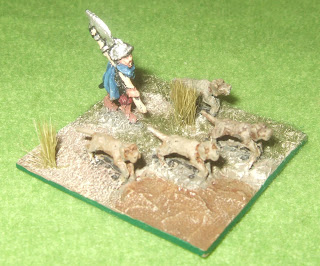 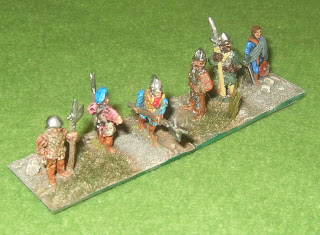 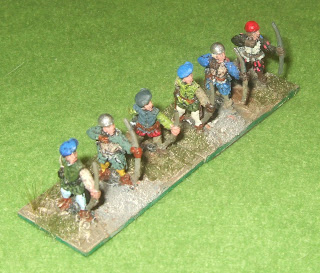 Posted by Counterpane at 4:20 AM No comments:

On the way back from Melrose we decided to revisit the Old Ship in Seahouses for some of their excellent Craster kippers (for me) and smoked fish chowder (for Charlie).  This gave us the opportunity to stop briefly at the Flodden Field memorial in Northumberland. 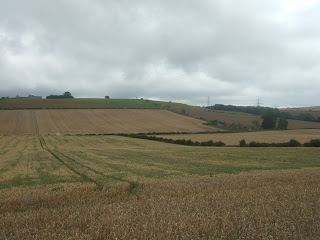 Flodden has excellent display boards and is a battlefield that really allows you to get a feel for the battle - the two armies having conveniently fought across a shallow valley that puts both sides "in the shop window".  The picture above shows the view from the centre of the English line to the ridge on which the Scottish were deployed.

The pictures below (click to enlarge) show details from the interpretation board at that site.  Next time I'm up there I must do the whole battlefield walk. 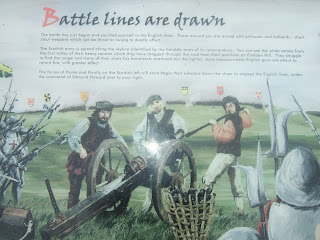 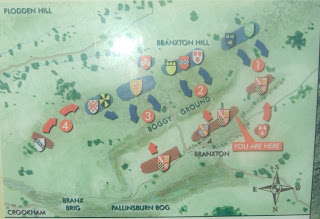 Finally, our visit did have one rather surreal note.  I often visit castles in Wales and almost invariably find myself sharing the site with a group of Welsh-speaking visitors.  It's always an odd feeling knowing they can understand every word you say but that you can't reciprocate.  Still, it's their country.  Very odd then to find myself at Flodden in Northumbria and sharing the battlefield monument with another Welsh-language guided tour!  Maybe the gods are telling me to learn Welsh?
Posted by Counterpane at 1:55 PM 2 comments:

Back from the Borders

I'm now back in Yorkshire after a week of rain, gaming, rain, the Edinburgh Festival, Scotch pies, rain, and a few trips out to castles and stuff.  First of the castles and stuff list was Hermitage.  A marvellous, brooding structure in Liddesdale.  Well worth the rather long trip. 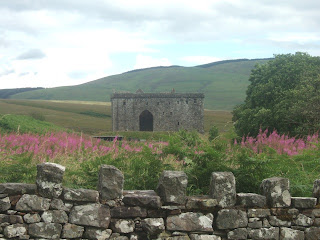 Then we had Smailholm Tower.  Shame about the scaffolding (they're fitting a green roof to stop leaks) but even so it's a place that really gives one a feel for Border Revier life. 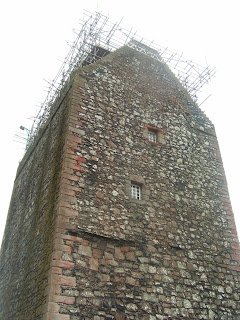 On the Saturday evening we got to play the first game with my new Border Reivers armies.  Here we see the Warden and his men recapturing the Reviers' stolen animals.  On the right of the picture the Reiver chief (three figure Rider element) is powerless to intervene. 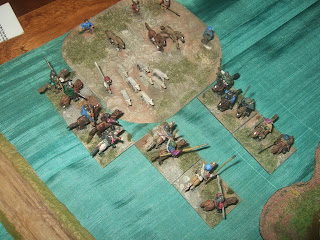 Unfortunately we forgot to bring a proper base cloth so all of our battles were fought on this rather luminous green curtain material we rescued from Gus's room.  Below is a scene from one of our 6mm scale Basic Impetus battles - Hyrkanians in the foreground and Cimmerians beyond.

Posted by Counterpane at 1:24 AM 2 comments: 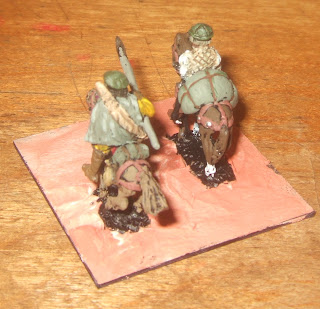 Last night I finished painting the last of my Border Reviers.  The figures have not inspired me and so it's taken about ten years.  I have not found it a particularly enjoyable process.

The last figure is the one on the right (above) and in the foreground below.  I've converted him to carry a large bundle of plunder and given him a new arm simply holding his reins rather than holding a spear.  Some of the spears were rather badly miscast. 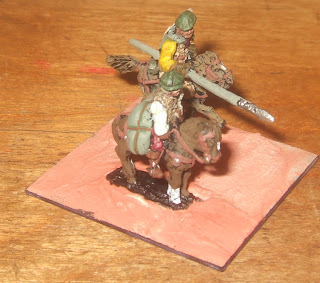 Obviously the next job is finishing off the basing and then I need to finish a stronghold (herd of "lifted" sheep, cattle and horses) for these guys and another (a peel tower) for the Warden's Men.  I'm off to Melrose for a week on Friday so I need to get it all done by then.
Posted by Counterpane at 12:13 AM 2 comments: