You'd Have to be a Lunatic, part 5

I did a terrain check last night to see what the terrain I've built for the Menton game would look like en masse.  I'm reasonably pleased with how it went. 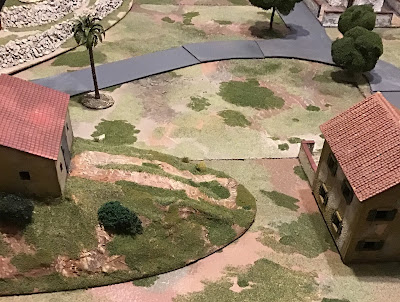 The hill-with-a-barn-on-top in the picture above is a new addition in the last couple of weeks as are the two walled yards around the roadside buildings. 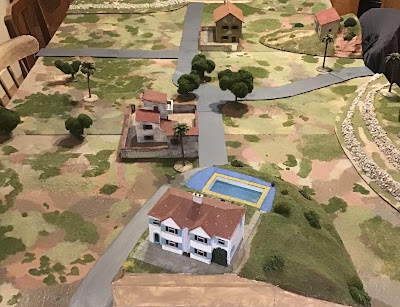 The terraced hills are reused from the SOTCW Salerno game at Gauntlet back in 2009. That was before I started this blog so they may not have appeared here before.  The largest of them is slightly warped so I may replace it with a couple of smaller ones. 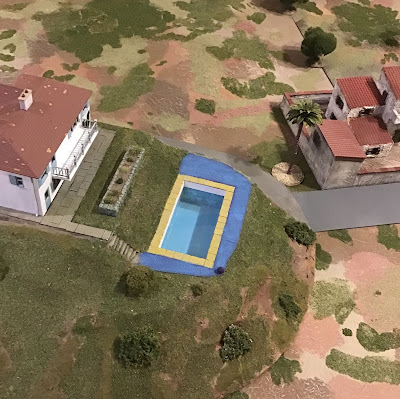 I'm trying to capture the idea of leafy suburbs of mention.  Richard Phillips is bringing a couple of hotel-sized buildings that would add nicely to the scene. 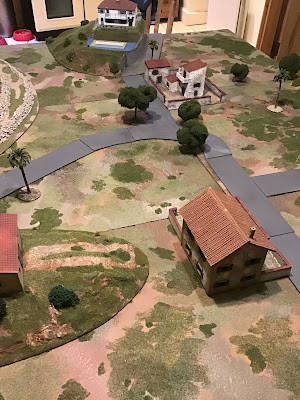 You'd Have to be a Lunatic, part 4

It's a while since I blogged here but i've been working hard on getting stuff ready for my Menton 1940 game at Crisis Point.  Terrain is the main focus of my efforts, and I'll cover that elsewhere, but I've also done some preparation of forces.

Firstly, with the Blitzkrieg 1940 supplement giving different Force Morale tracks to different platoons, I thought I'd have a go at doing some for the specific units I plan to use: 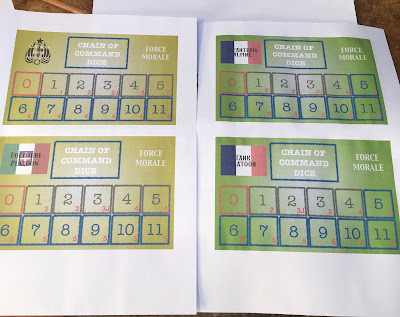 I created these in Pages on my Mac.  I'll probably laminate them before the game.

I've increased the size of the box for your Chain of Command Dice as it's not unusual to have two or more on the go.  The FM tracking boxes are colour coded to flag up when the first negative impact occurs and the red numbers in the bottom right hand corner of each square show the number of command dice rolled and, in some cases, when a unit must withdraw to its nearest Jump Off Point.

I've completed my French platoon by adding three VB rifle grenadiers from Early War Miniatures.  The Caporal is an old FAA model with a rifle from the spares box modified with a Green Stuff VB launcher cup. 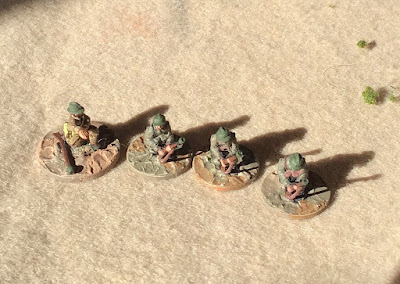 For the Italians I've now completed my Blackshirt platoon (or Camicie Nere Manipolo to be accurate).  They are a mix of Italeri Italian Mountain Troops with the feathers removed from their helmets, Airfix Italians and a few Airfix Japanese for variety. 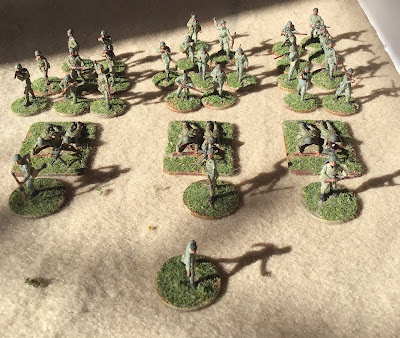 The LMG teams should have three men but I plan to use a system of unobtrusive markers to indicate when a team differs in strength from the number of figures on the base.

The same will apply to this MMG team.  All the figures are from Early War miniatures. 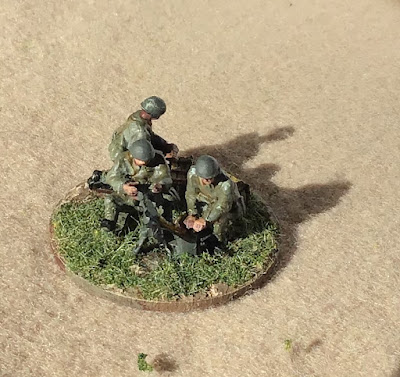 Also from EWM is this engineer team.  I couldn't resist them when I saw them event though they were in Western Desert uniforms.  I replaced the original heads (which had sun helmets) with steel-helmeted ones.  One came from a SMG-gunner that EWM kindly added to my order and the other is from the Italeri plastics.  I also had to sculpt long breeches to replace the shorts worn by the castings. 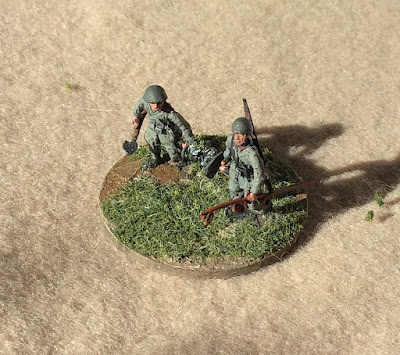 The casting was a bit imprecise around the figures' hands and it was impossible to get a strong bond to the pole on which the barbed wire reel is slung.  Also the pole snapped on one side while I was cleaning it up.  I ended up replacing it with brass rod and drilling holes in the figures' thighs into which the rod could firmly sit.  I then sculpted new hands in place.

The Brixia 45mm mortar team is pretty much as it came, I think.  There were a couple of steel-helmeted heads as options.  I may have had to do another shorts-to-breeches conversion; can't recall exactly. 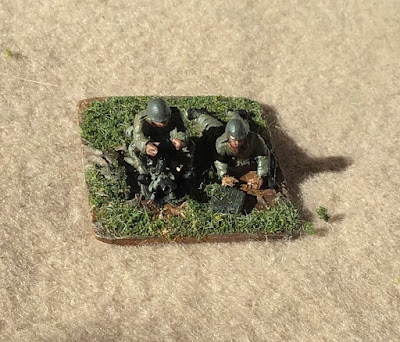 Finally, I wanted to add a mortar spotter to the Italian support options.  He needed to by using a field telephone rather than a radio.  This is what I ended up with... 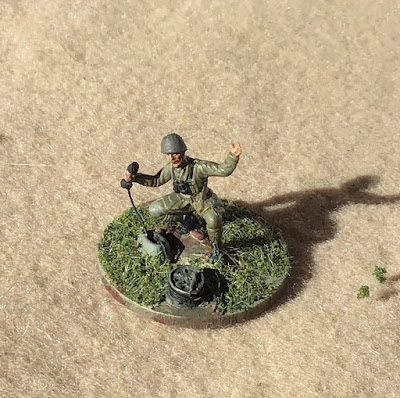 He started out as an Italeri mountain infantry officer with a pistol.  A head transplant from another Italeri figure gave him a steel helmet.  I cut way his pistol and threaded some thin wire through his hand.  The wire was from one of those paper ties for a food bag.

I then sculpted the telephone handset and the satchel containing the phone from Green Stuff.  The wire goes into the satchel and then comes out.  It winds round a small cable drum that came with the engineer team, and then runs to the edge of his base.

There's a 47mm infantry gun and a platoon of CV3/33 tankettes to photograph too.  I'll get them posted shortly.