It looks like there's a good chance I'll go ahead with revisiting the Woebetide Islands as the setting for an early eighteenth century skirmish campaign.  The owners of Wargames Illustrated seem to be keen that I do this as they've been mounting sprues of Woebetideus natives on the front cover of the magazine.

I say Woebetideus natives; WI (and manufacturers Warlord Games) regard them as Zulus or Natal Native Contingent but we know better of course.

I've got three of the four finished so far along with a dead Woebetideus left over from a pack I used in putting together a Gloranthan Hordes of the Things army many years ago. 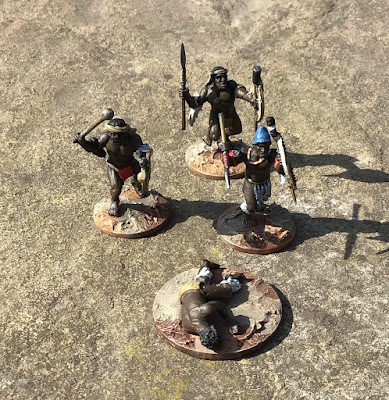 I don't particularly want these guys to look like transplanted Zulus so I'm going for the Natal Native Contingent look wherever possible.  For preference I'm using the NNC heads and the smaller shields.

Wargaming mate Chris has donated a second sprue so in a week or two I hope to have eight Woebetideus tribesmen.  That's enough for a first unit for either Sharp Practice or Muskets and Tomahawks.
Posted by Counterpane at 2:57 AM 4 comments:

I knew it!  As soon as I committed publicly to spending time building 6mm terrain, I'd get enthused by another project in 28mm or 20mm.  However, I have managed to get some 6mm stuff done.

First up is my Roman camp.

The resin tents are by Leven Miniatures.  I've left most of it as bare earth on the grounds that there would have been a lot of soldiers walking around.  Maybe I've overdone it?  A bit more grass?

Skipping forward a millennium and a half or more we have this... 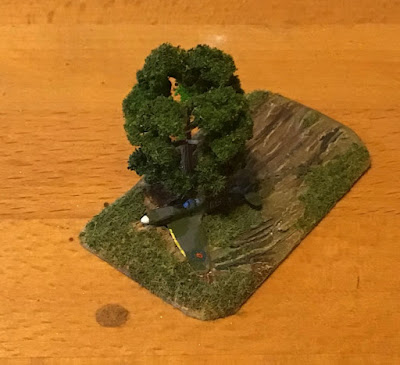 I had a rather nice Spitfire model that I acquired many years ago but that got a wing broken off in a tragic being-dropped-in-front-of-an-opening-door accident. 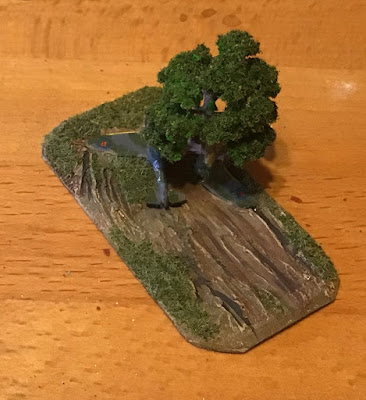 Sorry the pics are a bit dark but at least it disguises my poor paint job.

A few decades later on, a bit of repainting on a space 4x4 from my Cold War Swedes gives us this little civilian vehicle... 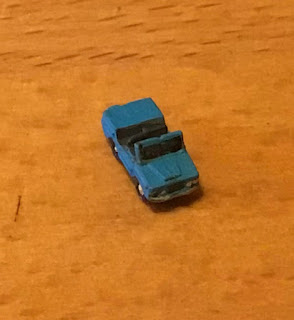 And finally for now we have the castle that appeared in my previous post on this subject. 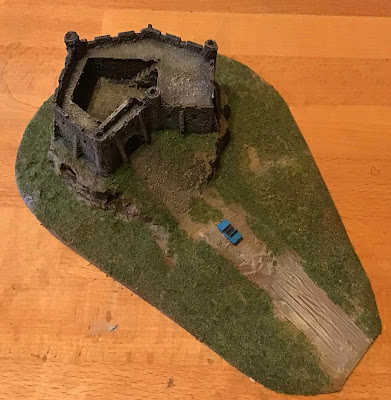 As I said previously, I reckon this will sit happily in the corner of any 6mm game from the Middle Ages onwards (without the car of course). 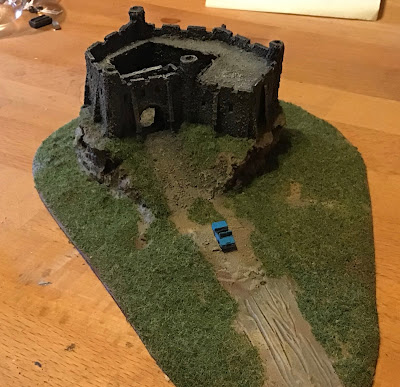 OK, so I've got some 6mm stuff done.  I promise to comeback with some more.  Eventually.

Muskets and Mangoes - A Future Project?

This, with its Blutac stains, rips, and muddy cat paw prints, is the original master map of the Woebetide Islands, location of some of the world's finest mango plantations. 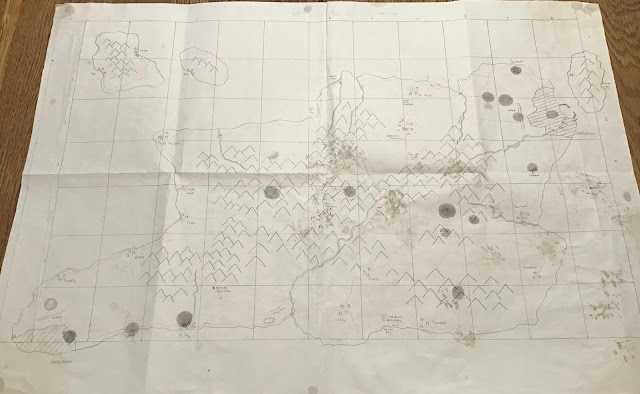 The Woebetides were the setting for a play-by-email campaign I ran over several months in 2000.  The campaign covered the less-than-peaceful coexistence of British and Vichy French colonies in these little-known (OK, fictional) Indian Ocean islands in 1942.  In the end the British launched a victorious operation that installed a pro-deGaulle administration in Charleville. 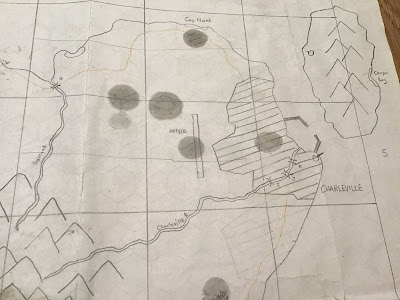 I recently rediscovered some of the campaign notes and was reminded what great fun it all was.

Meanwhile, I've been hankering to do some Sharp Practice at the earlier end of its timescale - the first half of the 18th century.  The availability of the Warlord Games War of the Spanish Succession figures in plastic is tempting me. 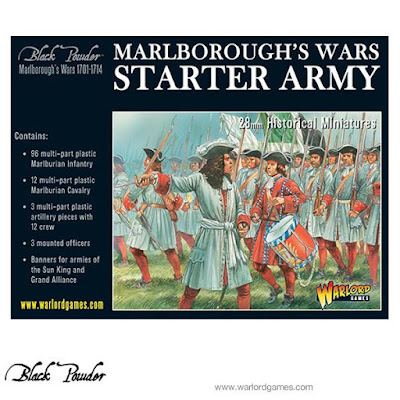 But then again I keep looking at Indian Mutiny games and thinking, "That would be fun - so many great plot ideas!"

Now, I could do 18th century British vs French in India but I don't know much about the history other than that it all seems to really kick off a bit later; during the Seven Years' War.

Then this morning the thought came to me.  Why not game the first British and French involvement in the Woebetides?  There are plenty of opportunities to involve the Arab traders in their coastal settlements, the African-descended natives in the hills, and probably pirates too! 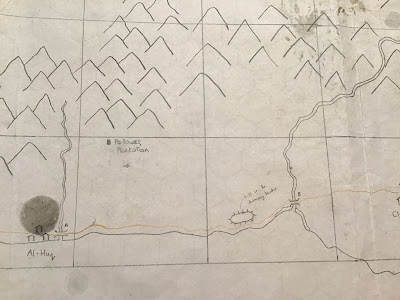 The final stage in my evolving thought process is that maybe this could be a project for a future Crisis Point?  I rather fancy the idea of having multiple factions, each with multiple objectives, running around a big table that represents the whole of the main island.  It's about a day's forced march from end to end.

The only problem with that idea is that Sharp Practice isn't great at multi-faction games.  But then I've been looking for an excuse to try Muskets and Tomahawks....

I've decided to spend a little while working on some 6mm terrain.  Nothing major, just making best use of some bits I've got lying around and trying to give my battlefields a lived-in look.

First up, I'm going to make a generic banked camp for my 6mm Late Roman forces. 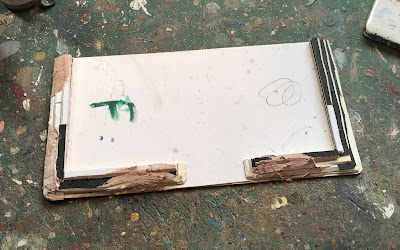 It's very simple; just a piece of artist's mounting board cut to 150x75mm.  That's the size of two squares on my smaller To The Strongest! board. I've started glooping it with my usual coloured tile grout.

I've also dug out this resin castle.  I bought it years ago and it saw use once or twice as a Hordes of the Things stronghold.  It's slightly smaller than 6mm scale and one corner of the cast-on resin base has broken off. 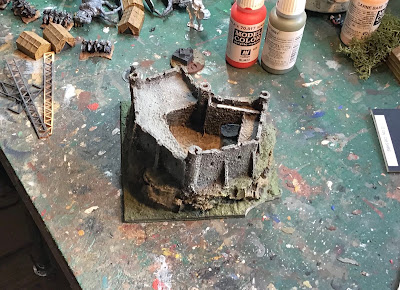 What I think I'll do is mount it on a piece of PVC board shaped to give me a natural-looking hill.  It'll make a nice piece of set dressing for 6mm scale battles in any period from the Middle Ages onwards.  I think I might break off the other square corners as they tend to catch the eye even when buried in gloop.

Apart from that it's just a case of scrabbling around in the bits box to see what else I may have that can be turned into passable 6mm scale stuff.

Posted by Counterpane at 1:56 AM 2 comments:

As usual after Crisis Point, the last thing I want to do is sit down and blog about it at length.  But here's a brief over view of the games.  The weekend went very well; I'm really pleased with the number of people who came and the spirit in which the games were played.

On Saturday we had three games.  On table one we had my Menton 1940 Chain of Command game, of which more anon... 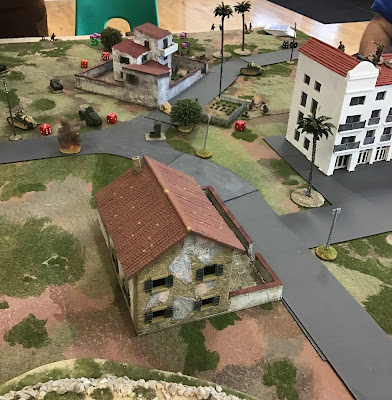 Table two was occupied by Jamie's game of Song of Drums and Shakos.  This was set in 1794 and saw two groups of revolutionary French up against a combined Austrian and Sardinian-Piedmontese force. 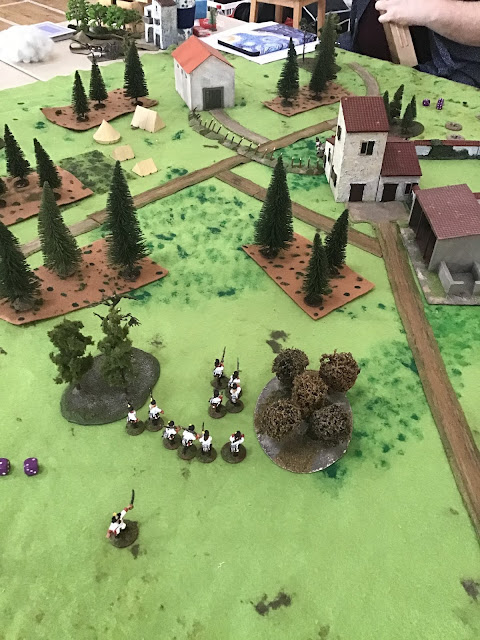 From what I could see, this seemed to go very well, with four players engrossed right up the the close of play.

Finally on day one we had big table depicting part of Malta in 1942.  This used Will McNally's excellent terrain on which a fictional German invasion was played out using the Battlegroup rules. 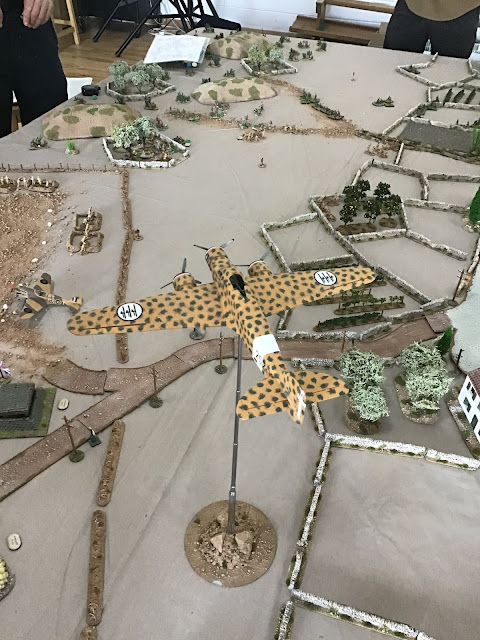 On Sunday, I switched to running a game of To The Strongest! set during the Second Punic War.

Jamie was keen to play in this game and as there were three other games to hoover up players, Jamie and I ended up playing this game with just the two of us. 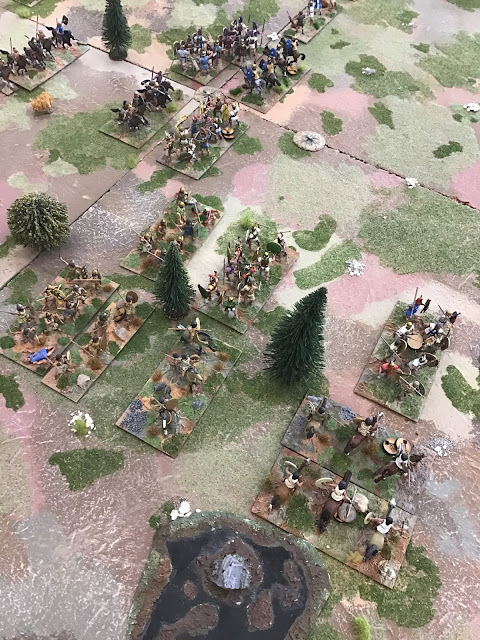 Surprisingly, for such a fast-play set of rules we didn't quite reach a conclusion.  I think my Carthaginian left was going to collapse before my right wing captured Jamie's Roman camp.

The next game on Sunday was Kevin Tingle's Beirut Force on Force game. 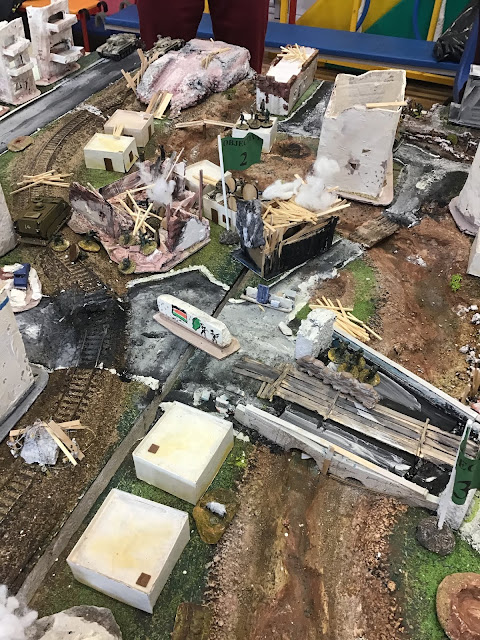 Kevin's game was a masterpiece of low-cost city building, using cardboard and balsa wood instead of expensive resin castings. 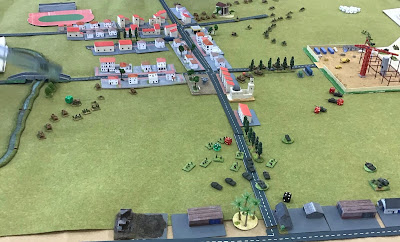 I didn't get to see much of this game in action but the idea of Soviet airborne troops landing at a half-constructed airport was a fun one.

Finally on Sunday, the Malta game continued, this time moving on from the initial airborne attack to a German seaborne invasion. 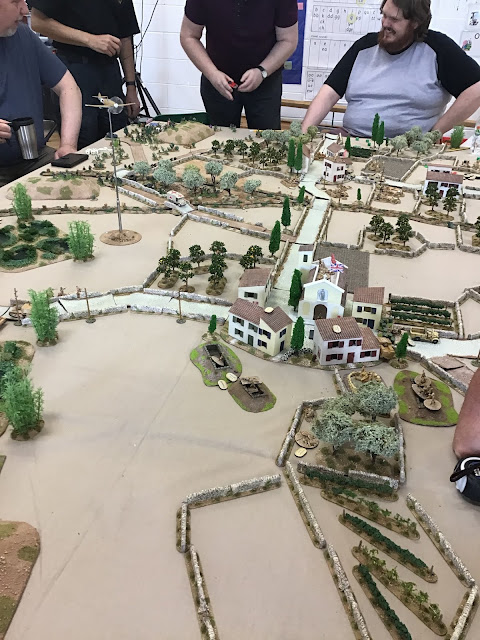 I'm very pleased with how Crisis Point went.  it was a pleasure to welcome attendees both old and new and in particular to see how the younger gamers (four this year) coped well with a whole weekend of intense table-top action.