From the Northern Wastes

Back in 2004 I took my Dwarf army to the Berkeley Hordes of the Things tournament and won "Best game aid" for my novelty combined-stronghold-and-dice-tower.  The prize was a load of 28mm figures that I've never got round to doing anything with.  Until now. 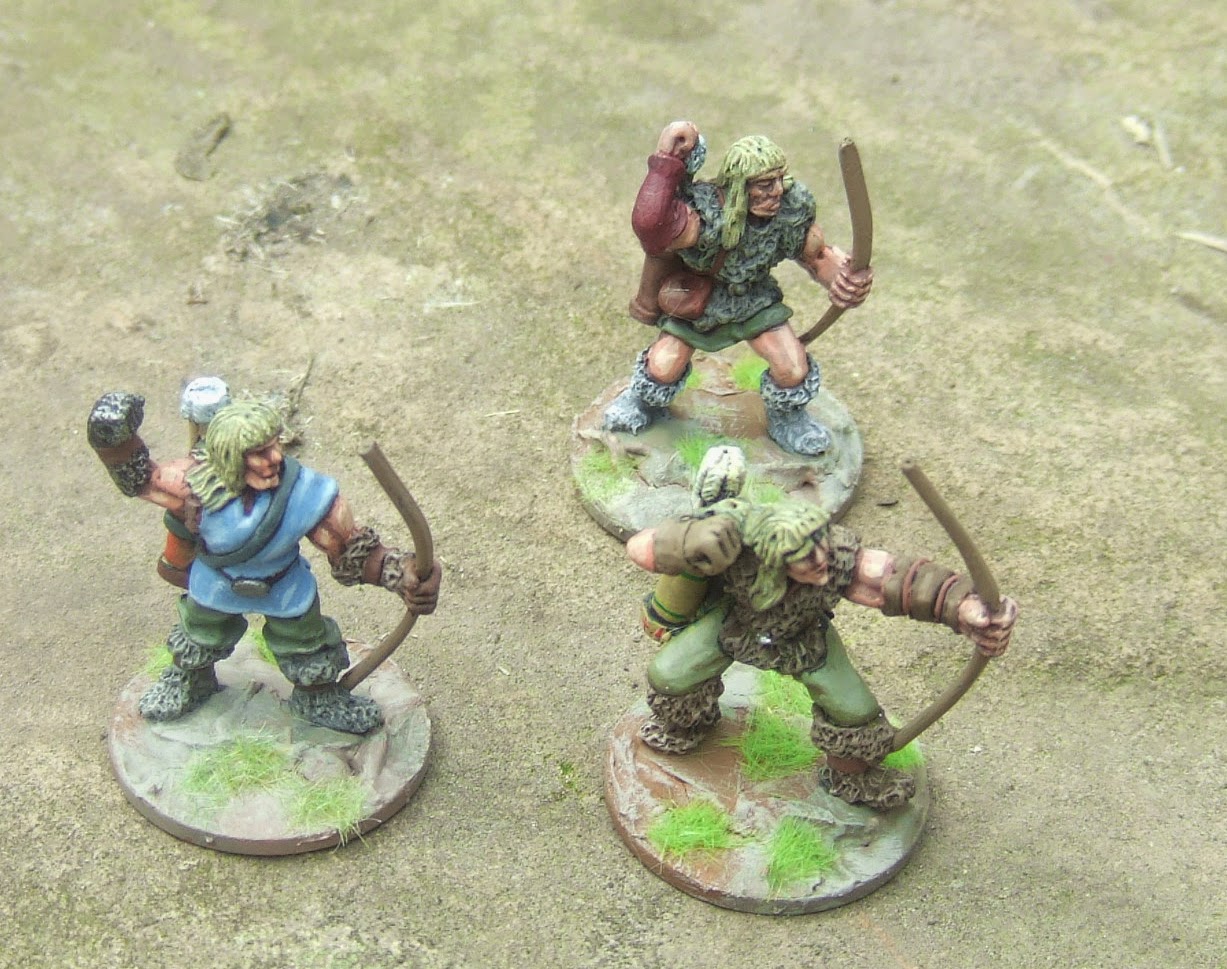 To me they have a Conan the Barbarian look.  Or perhaps they could be from the same SnowTribe as Fritz Leiber's Fafhrd? 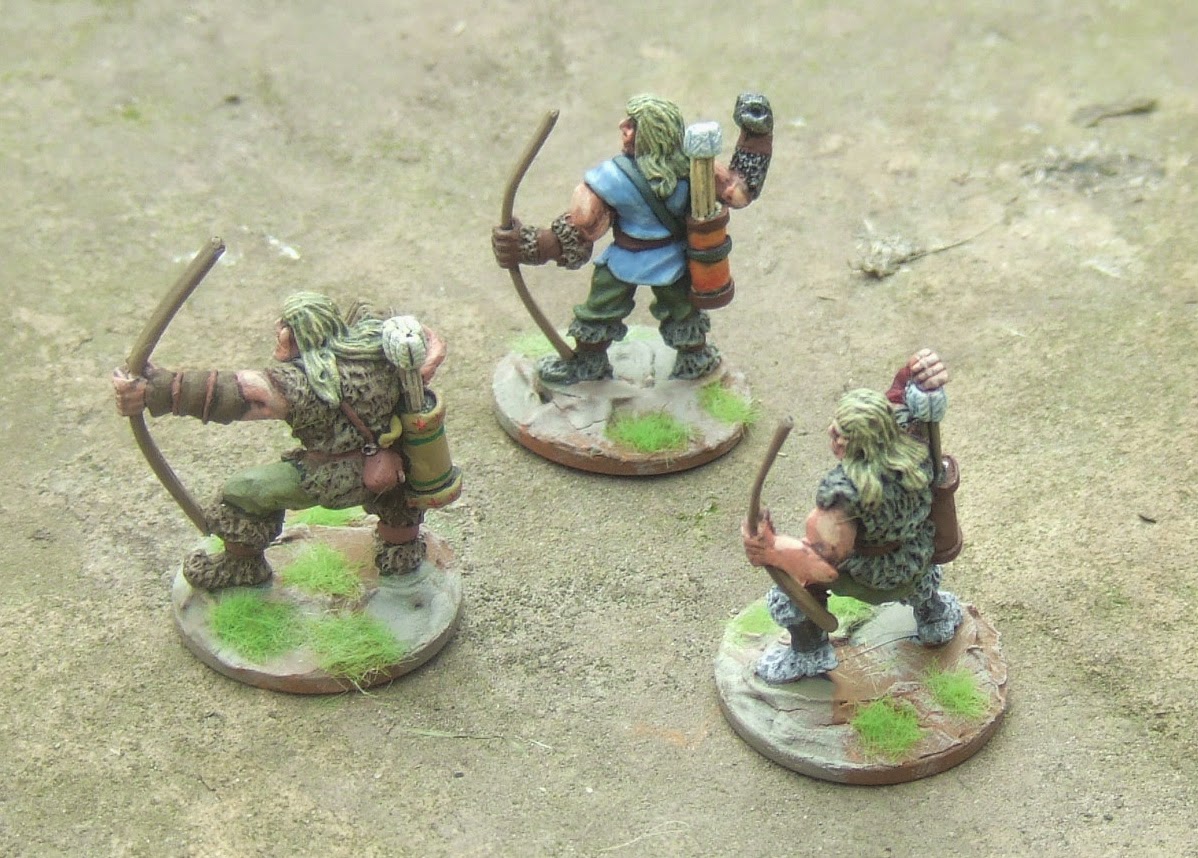 I'm not sure they're of much use to me (they aren't obviously Gloranthan) so I may stick them on eBay. 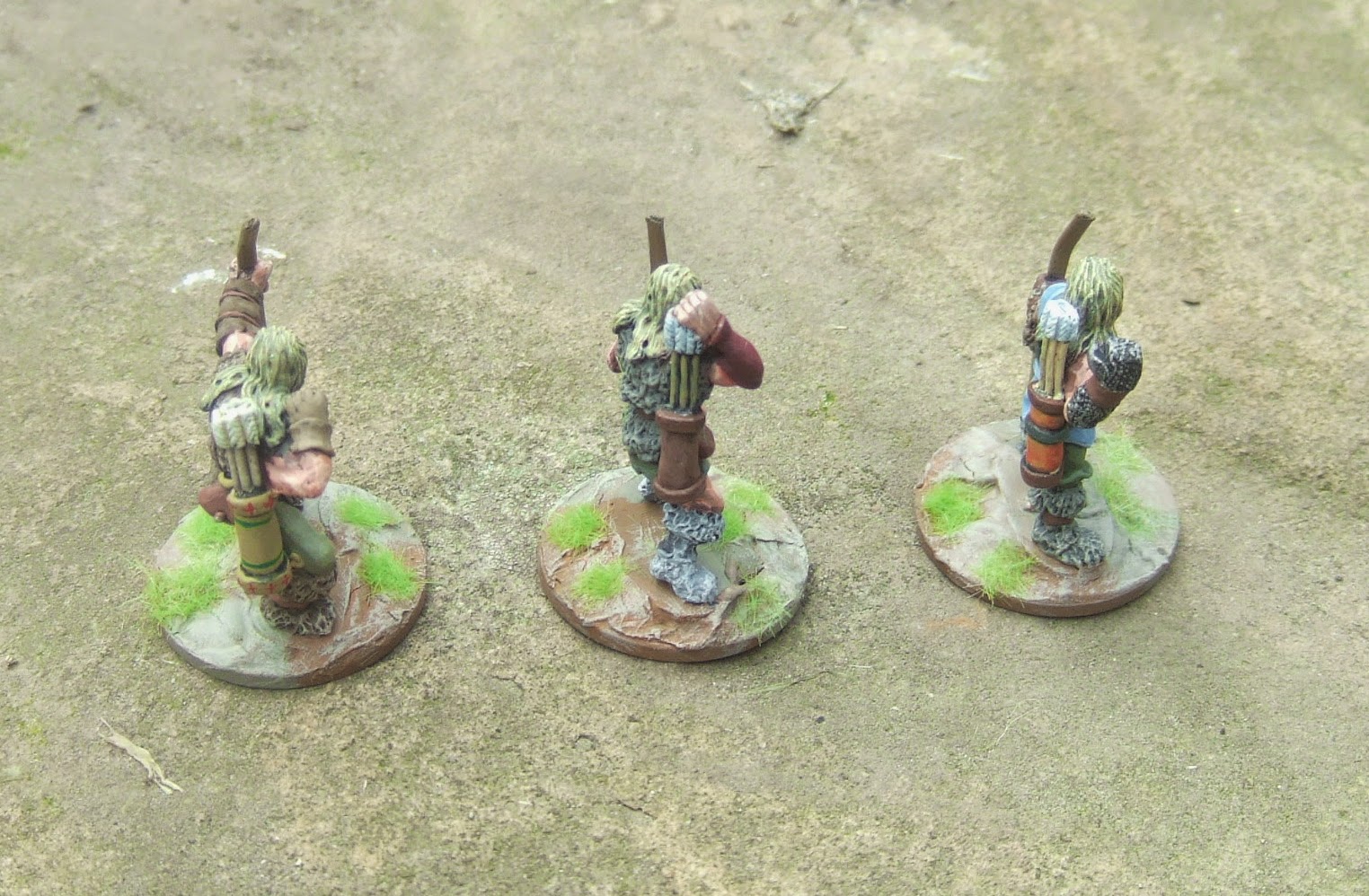 There's not been much from me on here in the last few days because my wargaming efforts have mostly focussed on getting more of my 1/300th scale vehicles based to my modern standard.  I've done bits and bobs of WW2 and Cold War stuff but it's not the kind of work that justifies photographing to post on the blog.

I have, however, just finished a scorpionman that will be useful for my Pavis SOBH project. 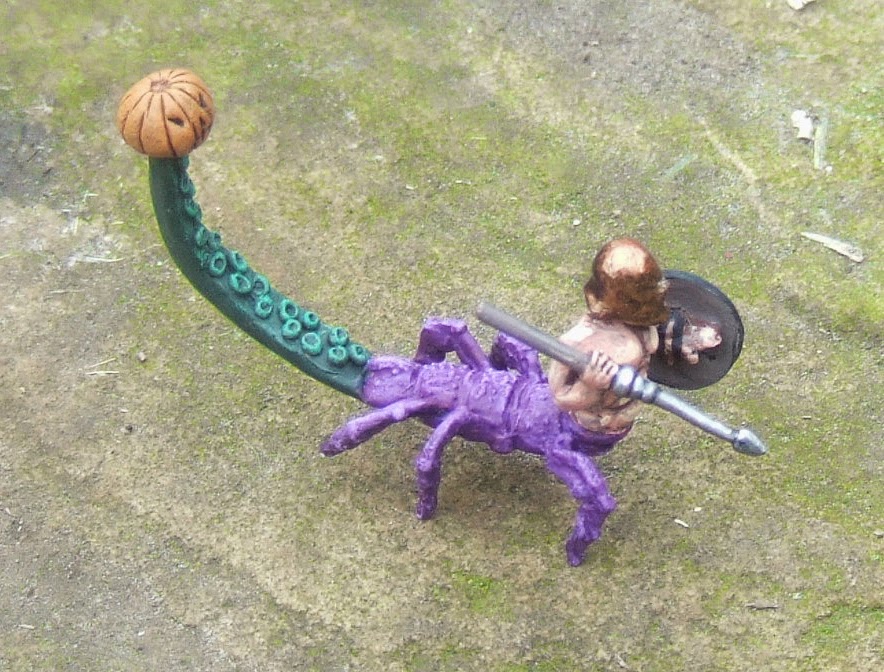 The basic model is from the old Citadel Miniatures Runequest range.  It was part of a collection of scorpionmen I was given years ago.  The rest went into my Muriah, Witch Queen of the Broos force for Hordes of the Things.  This one was lacking a tail so I decided to go down the chaotic-mix-of-creatures route and sculpt a new one.  Hence the head of a Jack-o-Bear on the end of a walktapus tentacle.  The shield came attached to the figure but I've added a pilum from an old Lamming Roman legionary. 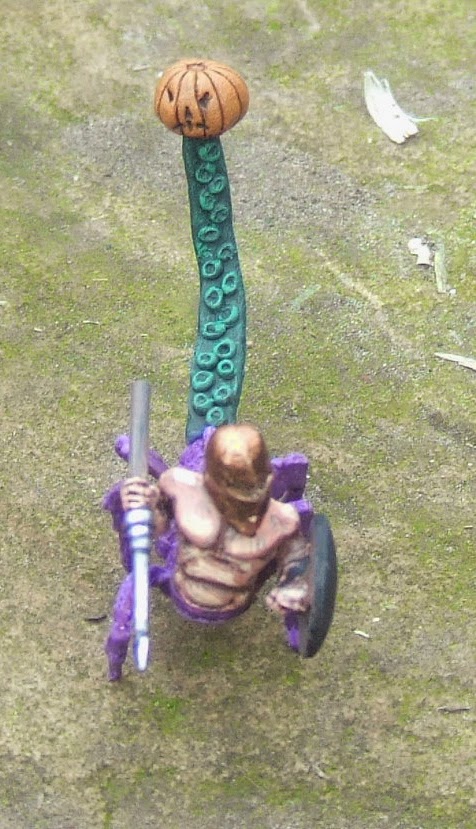 I'll have to take account of the modification when I come to stat him up for SOBH.  Normally I'd give a scorpionman the Poison special rule but in this case I suspect the ability to Transfix would be more appropriate. 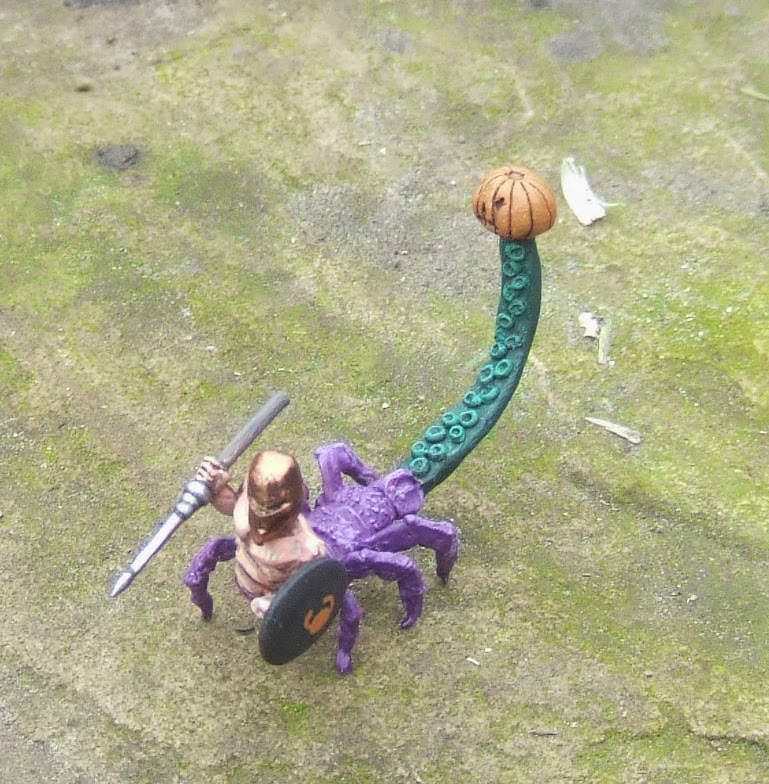 This scorpionman is the second member of a forthcoming warband.  Below we see him alongside a Ral Partha version with the more conventional stinger tail.  As you can see, I like bright colours for my scorpionmen. 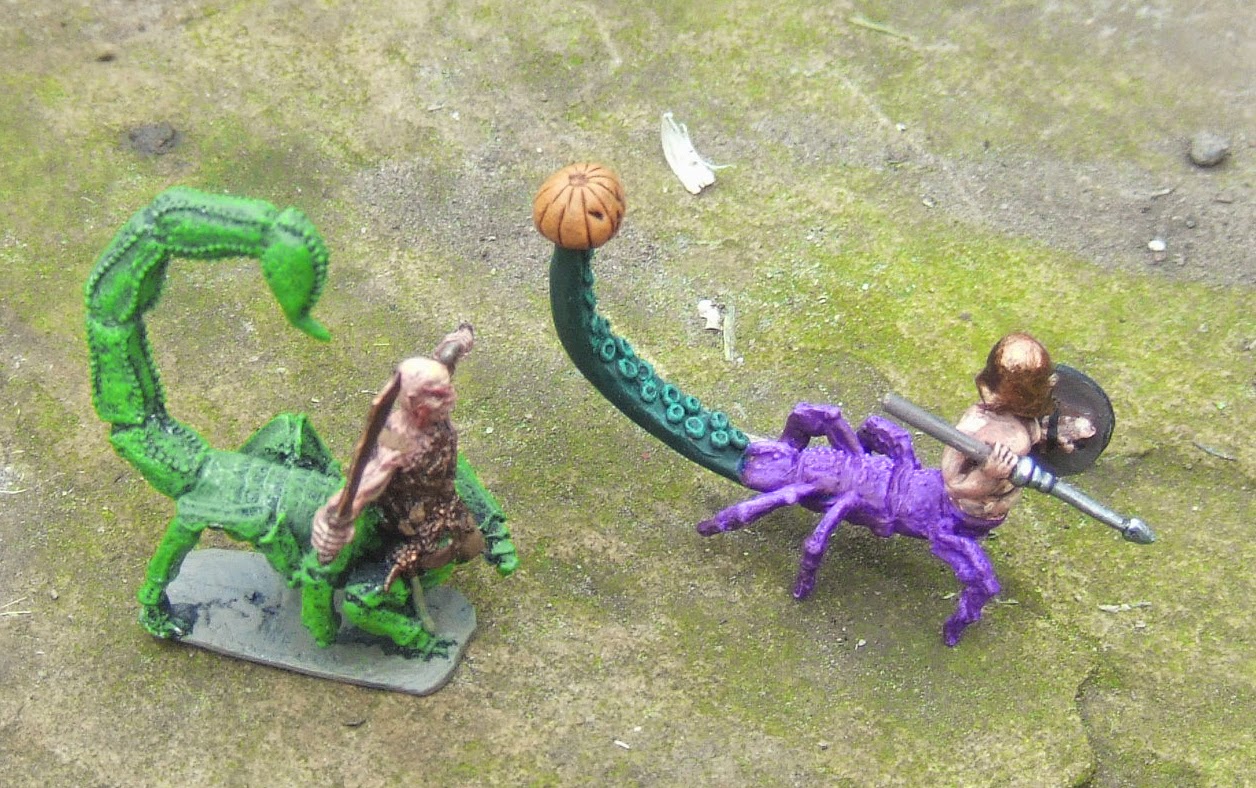 So this weekend saw me attending what I think was my thirty first Triples!  Pretty sure the first one I went to was in 1983 at the Royal Victoria Hotel, just over the road from where I now work.  Back then I was a keen role-player and I remember taking part in the Runequest "tournament" playing a stupid and foul-mouthed Broo.

Nowadays, Triples has moved to the English Institute for Sport in the lower Don Valley.  This venue has plenty of space and parking.  I'm sure it's great for traders and game organisers loading their stuff in and out but it's a bit soulless compared the the Royal Victoria or even the Octagon Centre.

An early stop for me most years at Triples is the Wargames Developments game.  These are always fun.  And short.  This year it was five minutes (literally) spent shooting down V-1s over southern England.  I think I got four or five!  Mind you I lost a couple Spitfire XIVs in the process!

As I mentioned in the previous posting I was certain to muck up the record of net reduction of the lead pile but on the whole I was very restrained.  These two 28mm figures came from Ainsty (under the Great Escape Games imprint). 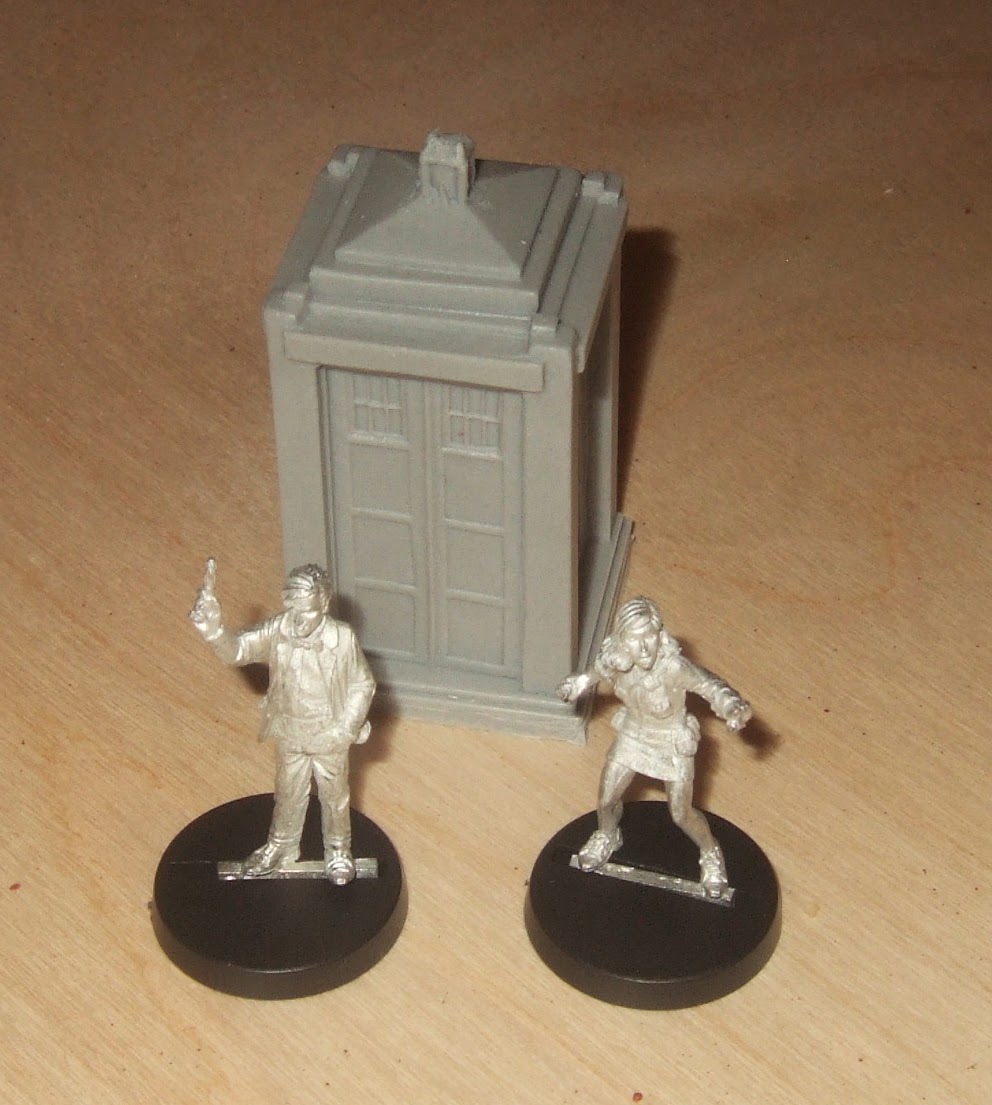 To anyone except the BBC's lawyers they are Matt Smith as the Doctor (yes, I admit it; it's not cool but Matt Smith's my favourite Doctor!) and Karen Gillan as Amy Pond.  Unfortunately Amy's in her episode one police woman's uniform which somewhat limit's the usefulness of the figure.  If I'd realised I might have gone for a different blister pack.  The TARDIS Constabulary Communications Cabin is also from Ainsty.

Next up was a real bargain from the bring-and-buy; three M4A3s for a tenner! 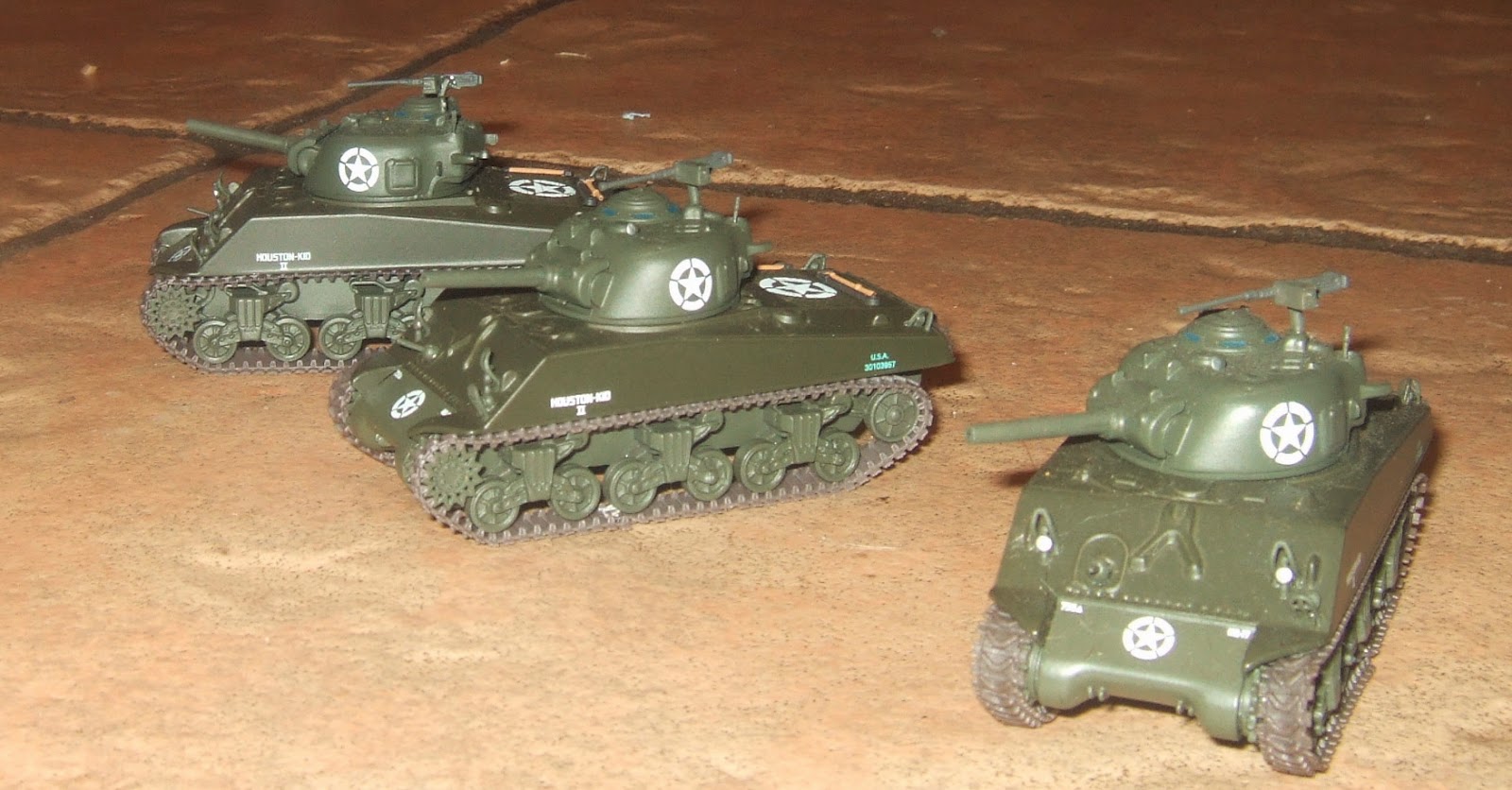 And finally, from the ever helpful Steve Oates of the Baggage Train, some painted BT-7s.  They'll look great alongside the as yet unused T-28s I bought from him previously.

As to the games, I was a little disappointed.  There weren't any that really got my creative juices flowing.  I'd have liked to see some games with nicely presented, large units of 6mm scale figures.

Here are some pics: 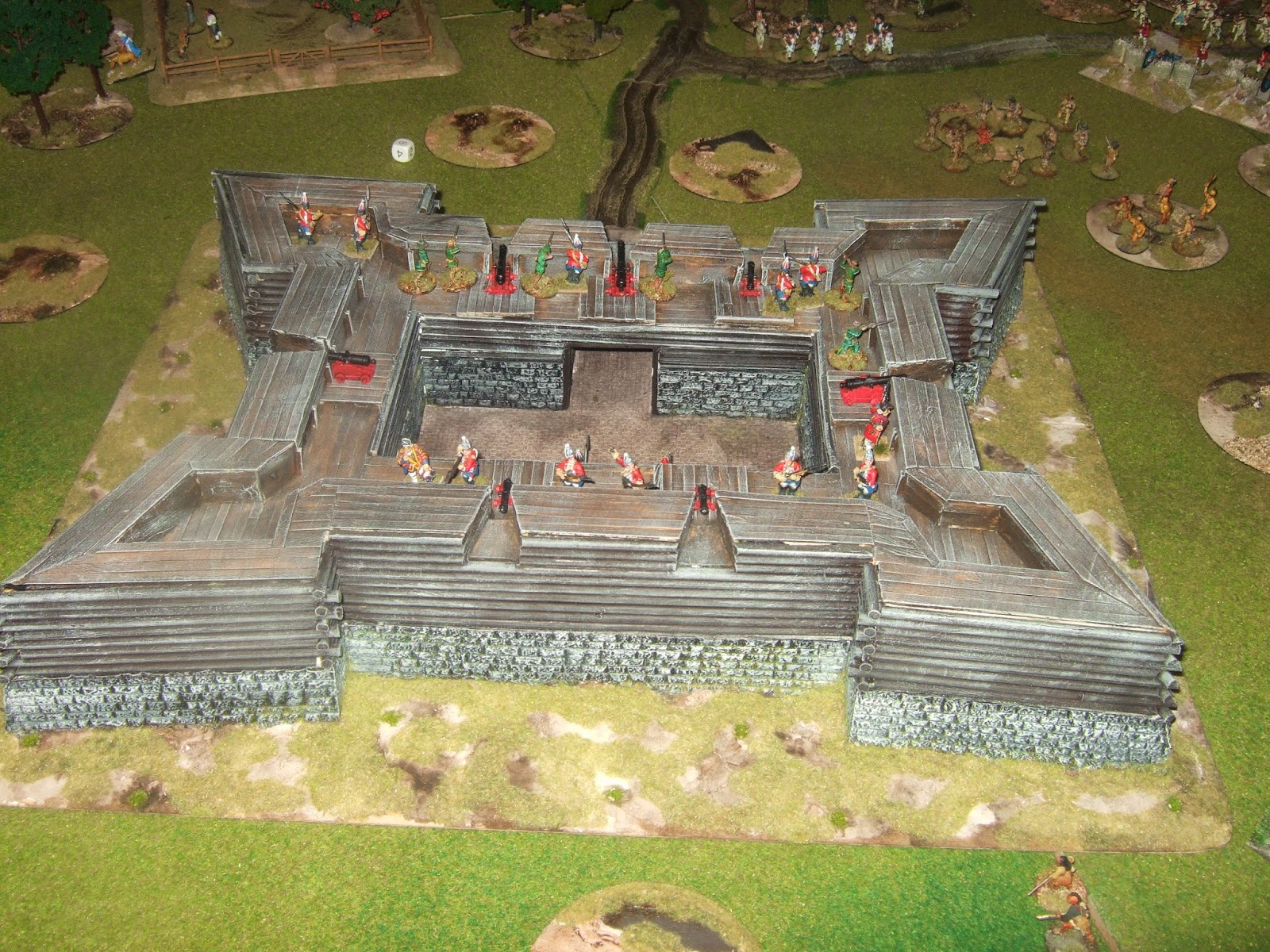 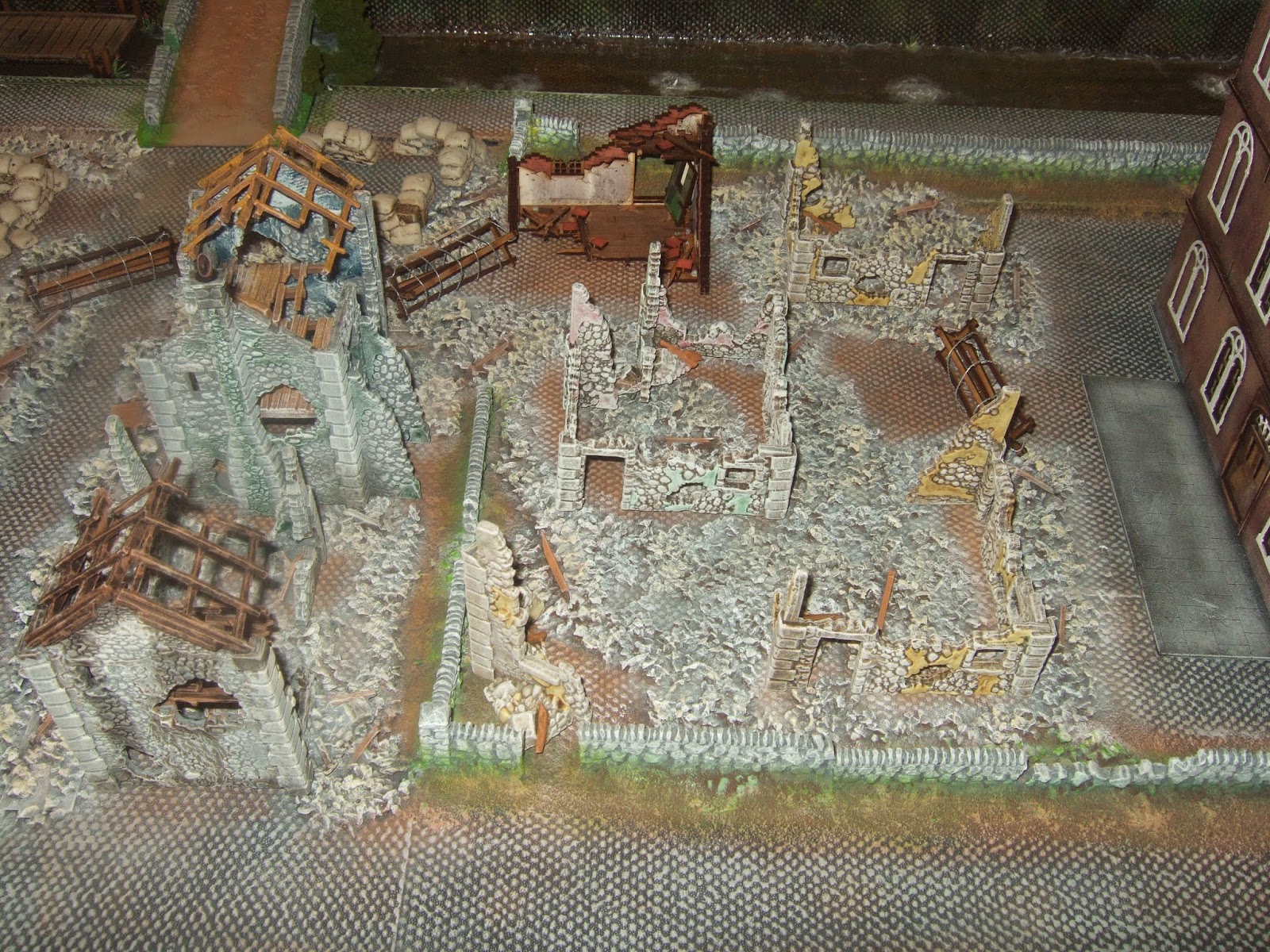 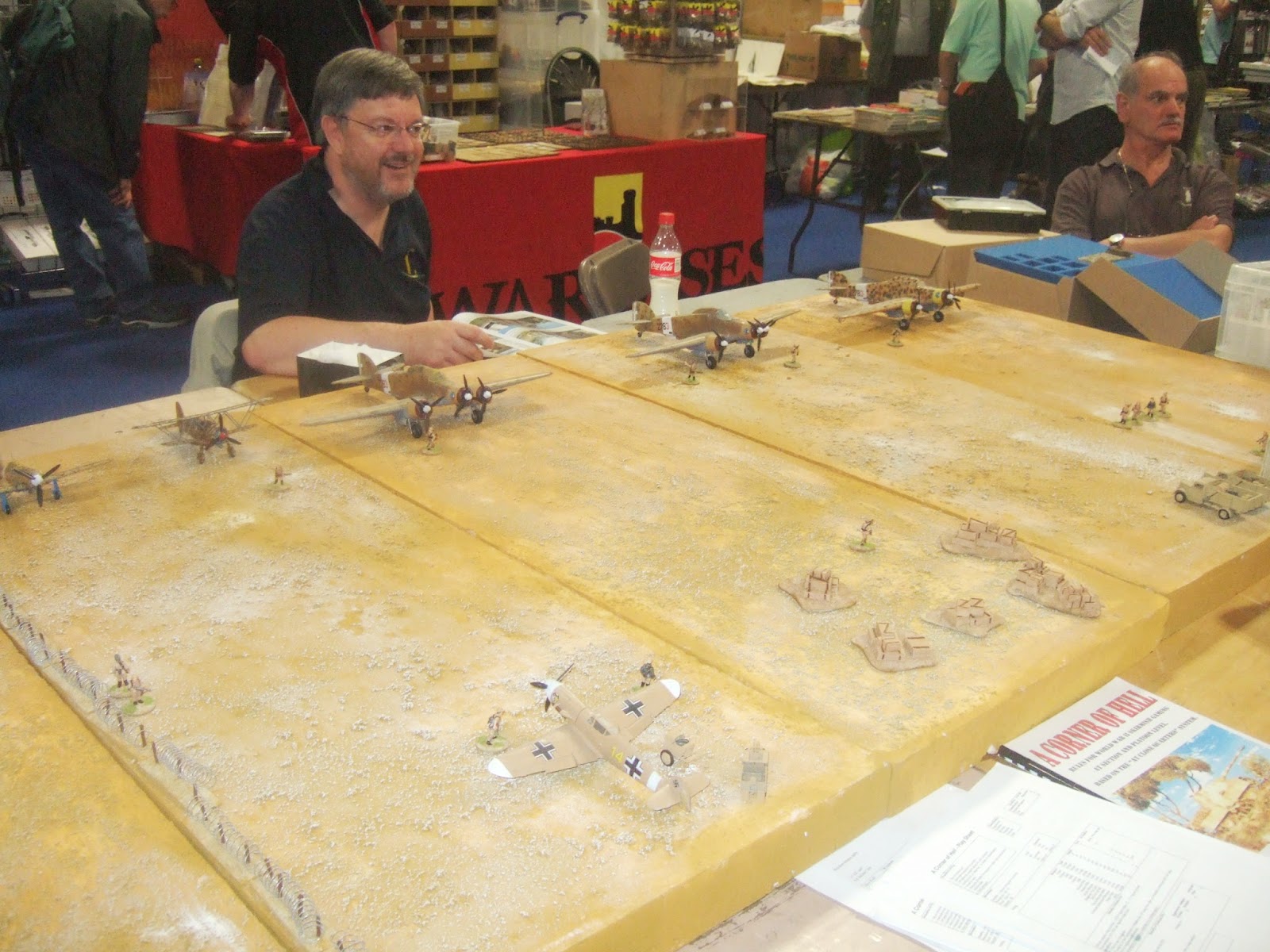 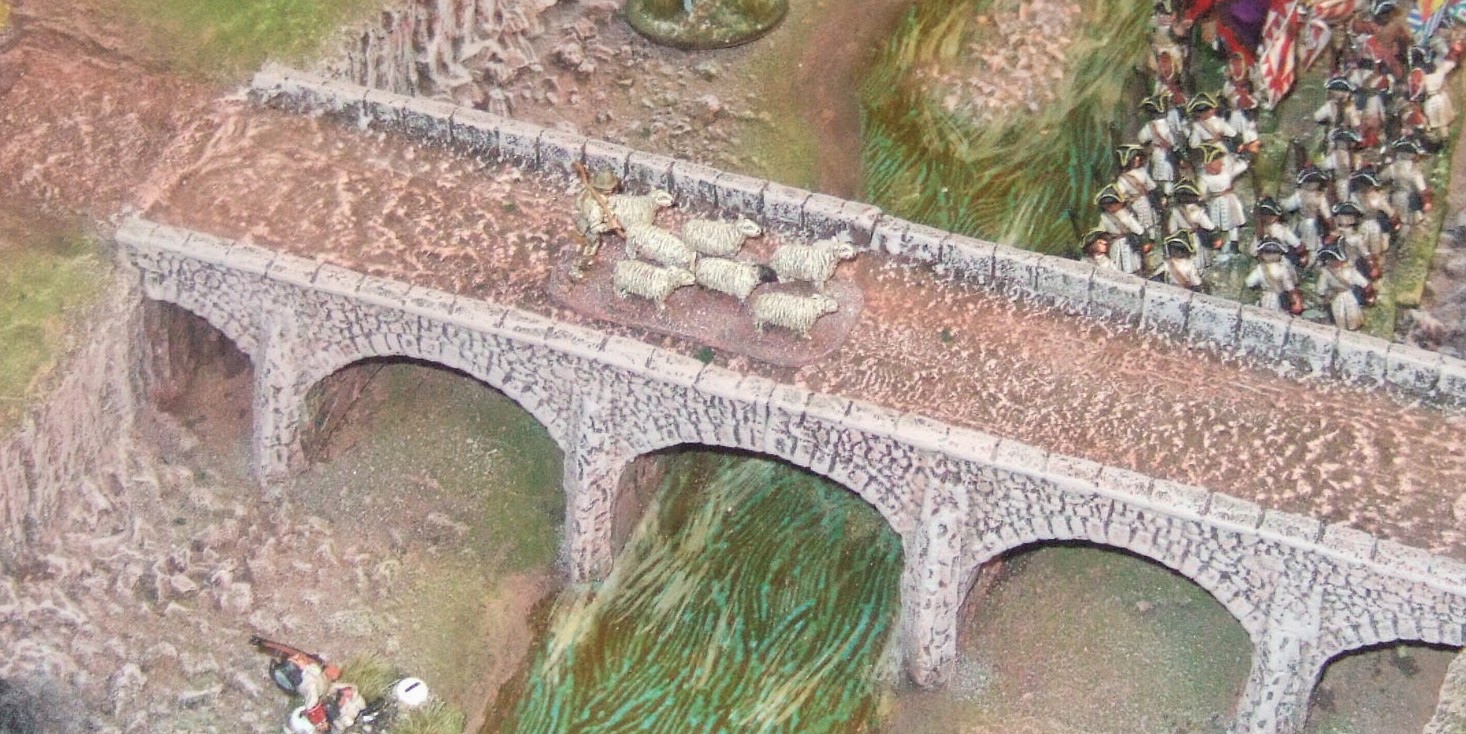 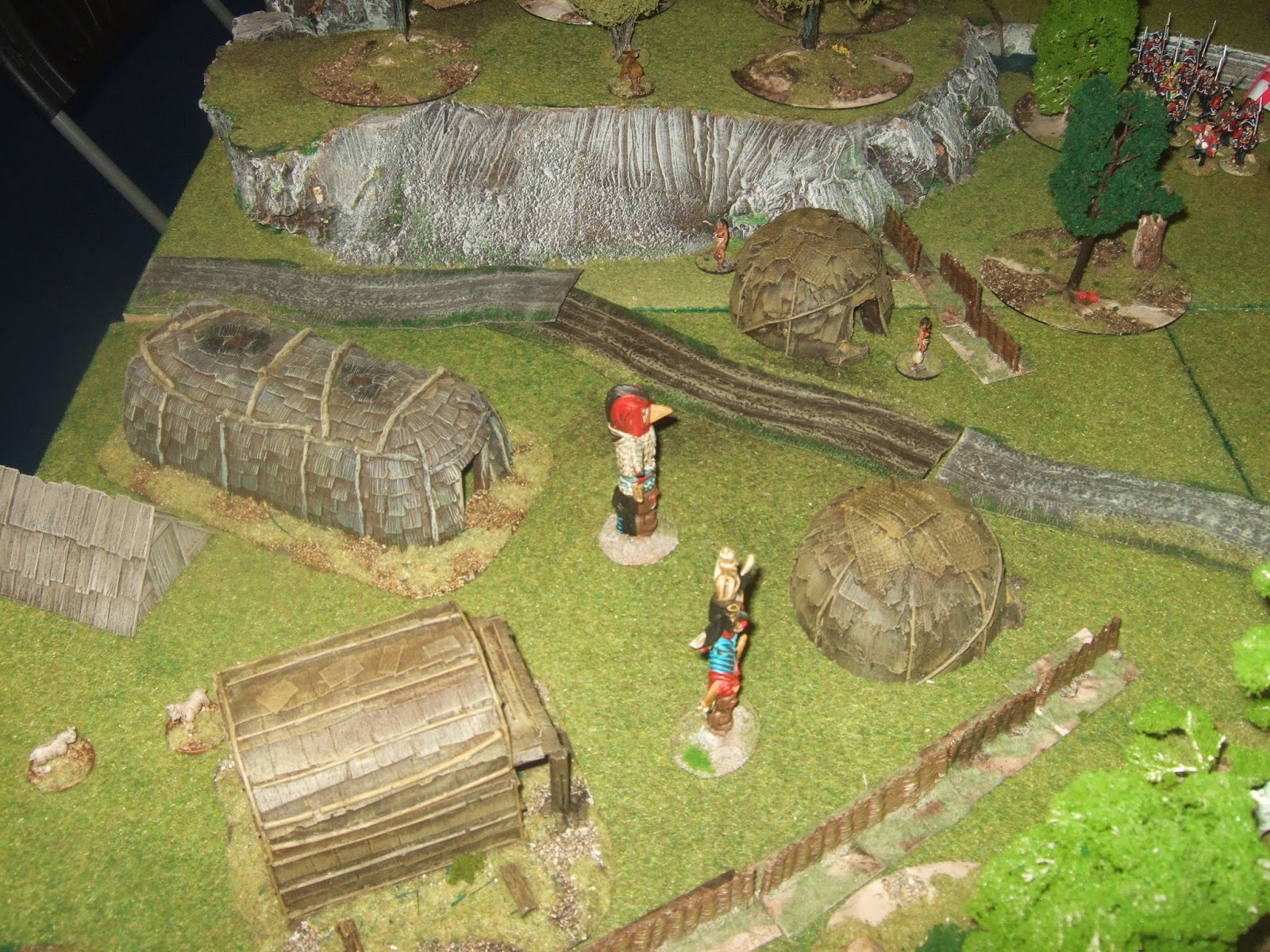 Posted by Counterpane at 1:31 PM 5 comments:

Downhill all the way?

This morning I finished matt varnishing two Lunar peltasts and a couple of Morokanth.


Together they take my total of painted 28mm figures since the start of September to a satisfying thirty one, which also happens to be the number of new 28mm figures I've bought over the same period.

In fact I'm now in the position that in all of the categories I'm tracking this year (terrain and markers, 20mm figures, 20mm vehicles and guns, 20mm aircraft, 28mm figures, 6mm units, and 6mm vehicles) I'm at least neutral.

From now on the lead-pile is getting smaller!  Oh, except that it's Triples this weekend and there's a severe danger I'll undo all the good work with a shopping splurge!
Posted by Counterpane at 11:57 AM 2 comments:

Oh dear, I feel another project coming on...

Inspired by some Mordheim posts on the Lead Adventure Forum, I'm seriously considering building more terrain and figures to allow me to game bits of Pavis in 28mm using Song of Blades and Heroes. 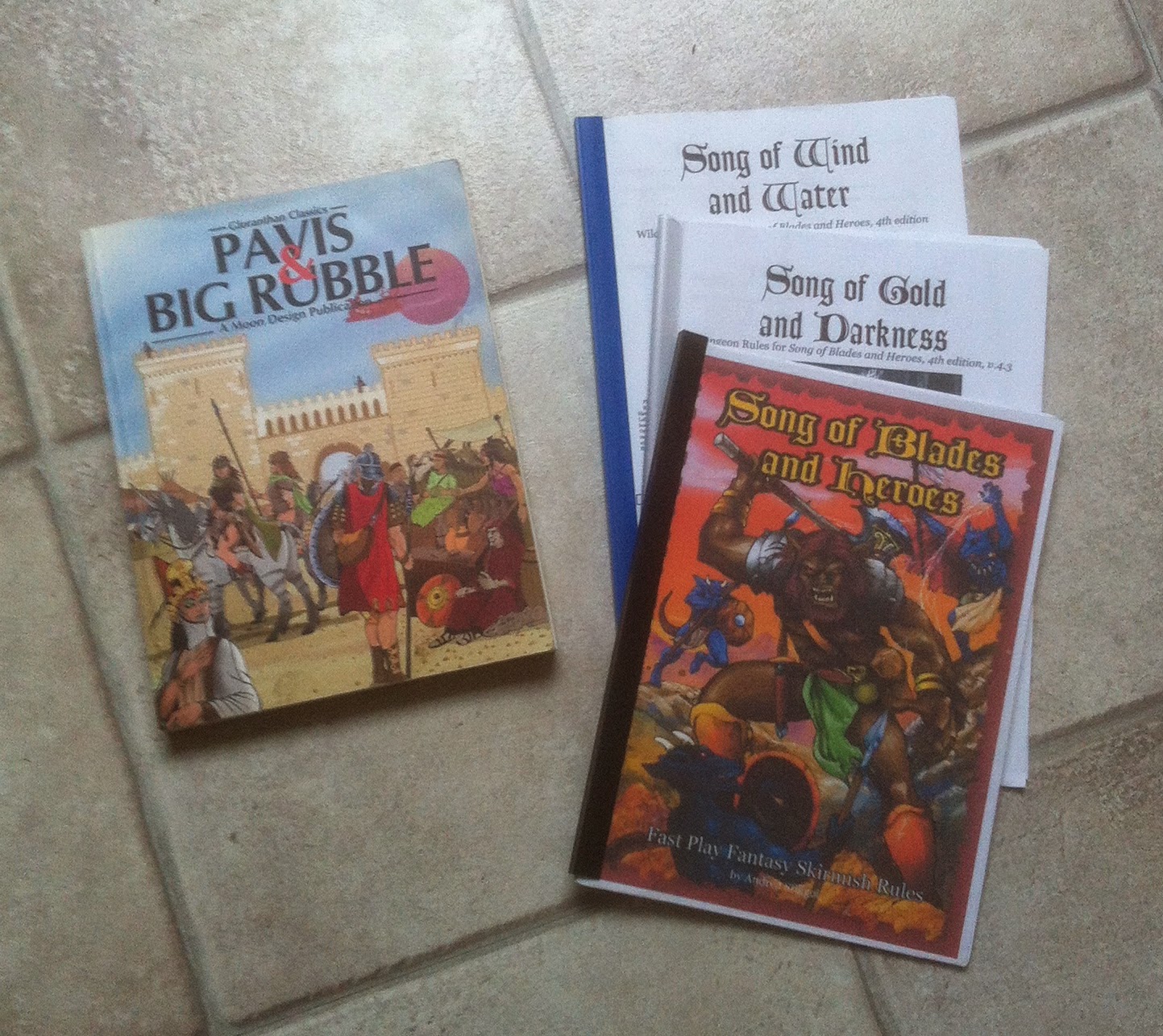 Pavis is one of my favourite settings within Glorantha but strangely I didn't get to game there much in my role-playing days.

For those of you not familiar, Pavis is a huge ruined city, surrounded by giant-built walls and sitting on the edge of one of Glorantha's great wildernesses.  It has huge potential for a Mordheim-type campaign.

For those of you who are Glorantha-philes, I'm currently thinking about gaming two areas - the Troll Break (as I already built that section of wall for my Hordes of the Things armies to fight over) and the area around the Griffin Gate (which includes Balastor's Barracks for underground fun).

As usual, though, this may take many years to come to fruition as spirits of confusion take me off towards other goals.
Posted by Counterpane at 11:40 PM 5 comments:

With Triples approaching I thought I ought to make some progress on the Baccus 6mm Poles I bought there last year.

First up is a couple of generals. 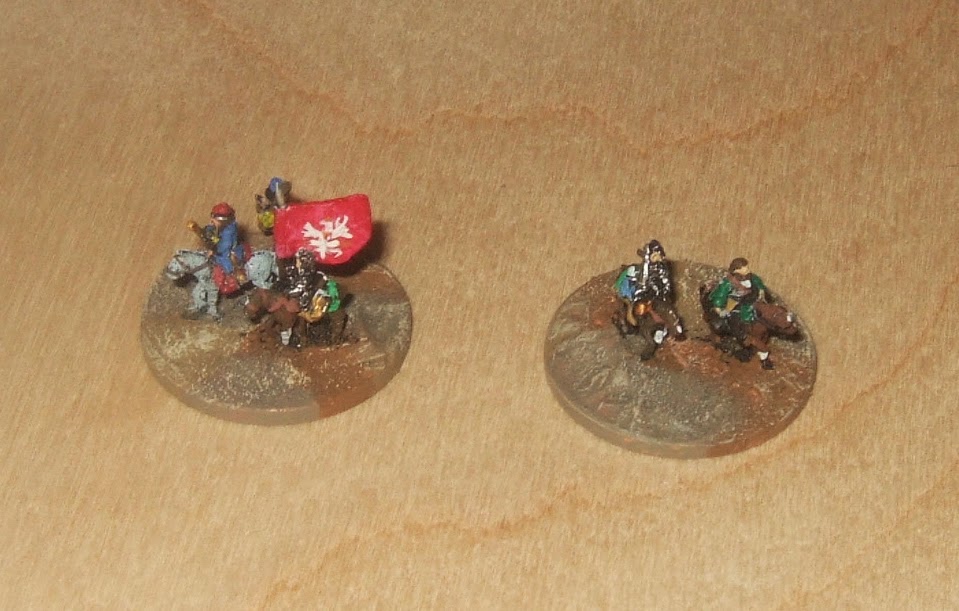 The chap on the left is King Jan III Sobieski, King of Poland and Grand Duke of Lithuania from 1674 to 1696.  He defeated the turks at Vienna in 1683.  Jan himself is a conversion from a Cossack based on a picture in one of the Osprey books on the Polish army.  His banner bearer is from the Pancerni and a Drabant marches past behind (repainted Russian strelets).  All of the figures from Baccus.

The other base is a generic leader.  He'll be a "notable" if I end up using these guys to play Maurice.  He's an ECW general and is again accompanied by a figure from the pancerni set.  Again, both Baccus.

And then we have a unit of Pancerni: 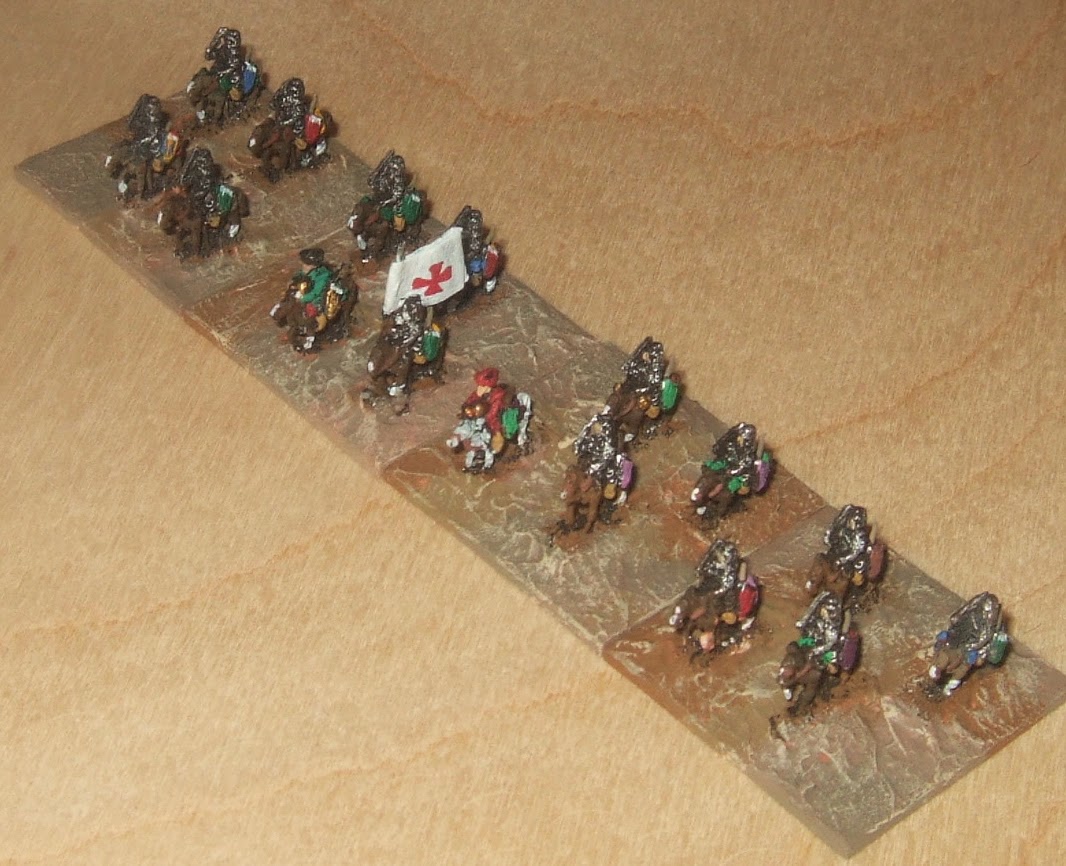 They are straight out of the Baccus Polish army pack.  They, and the generals are just in need of static grass applying to their basis, which I'll do when I've restocked at Triples. 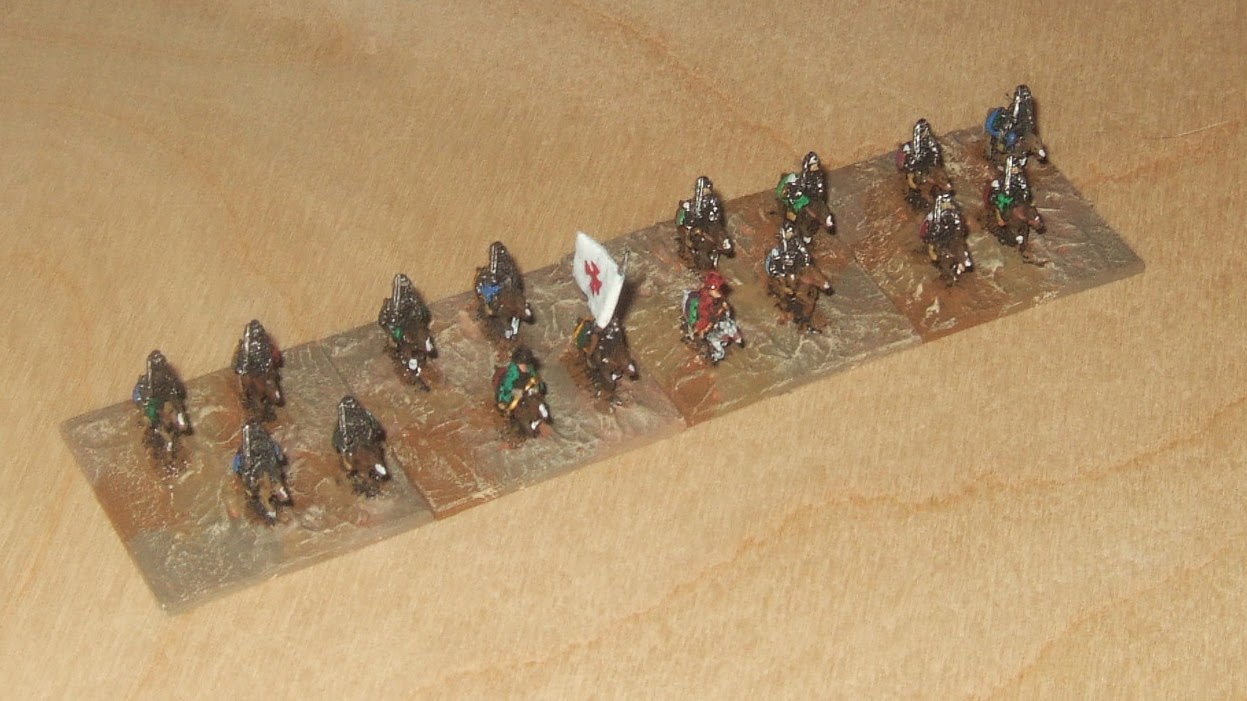 You'll note that I'm now basing on 30mm squares to fit with the Maurice rules.  My previous units for this period are on 60x30mm bases.  I can use two of these to make one 60mm base if I go back to that standard but I also plan to make some more 30mm scale squares to extend the existing units to Maurice size.
Posted by Counterpane at 12:21 AM 2 comments:

A Trio of Comets

My troop of Comets has taken over thirty years to complete!

The model on the left is one that I originally built as a teenager.  I've since repainted it and added an AB Miniatures commander.  The one in the middle was a very knackered one given me by a friend.  It took some resurrecting.  The one on the right is a recently acquired Revell re-release of the Matchbox original.

I have a plan to use them in a forthcoming Saturday Afternoon Wargame (TM).
Posted by Counterpane at 10:45 AM 2 comments:

Released from the discipline of a forthcoming major project I've wandered off into the jungle thickets of my lead-pile with no clear idea of where I'm going. 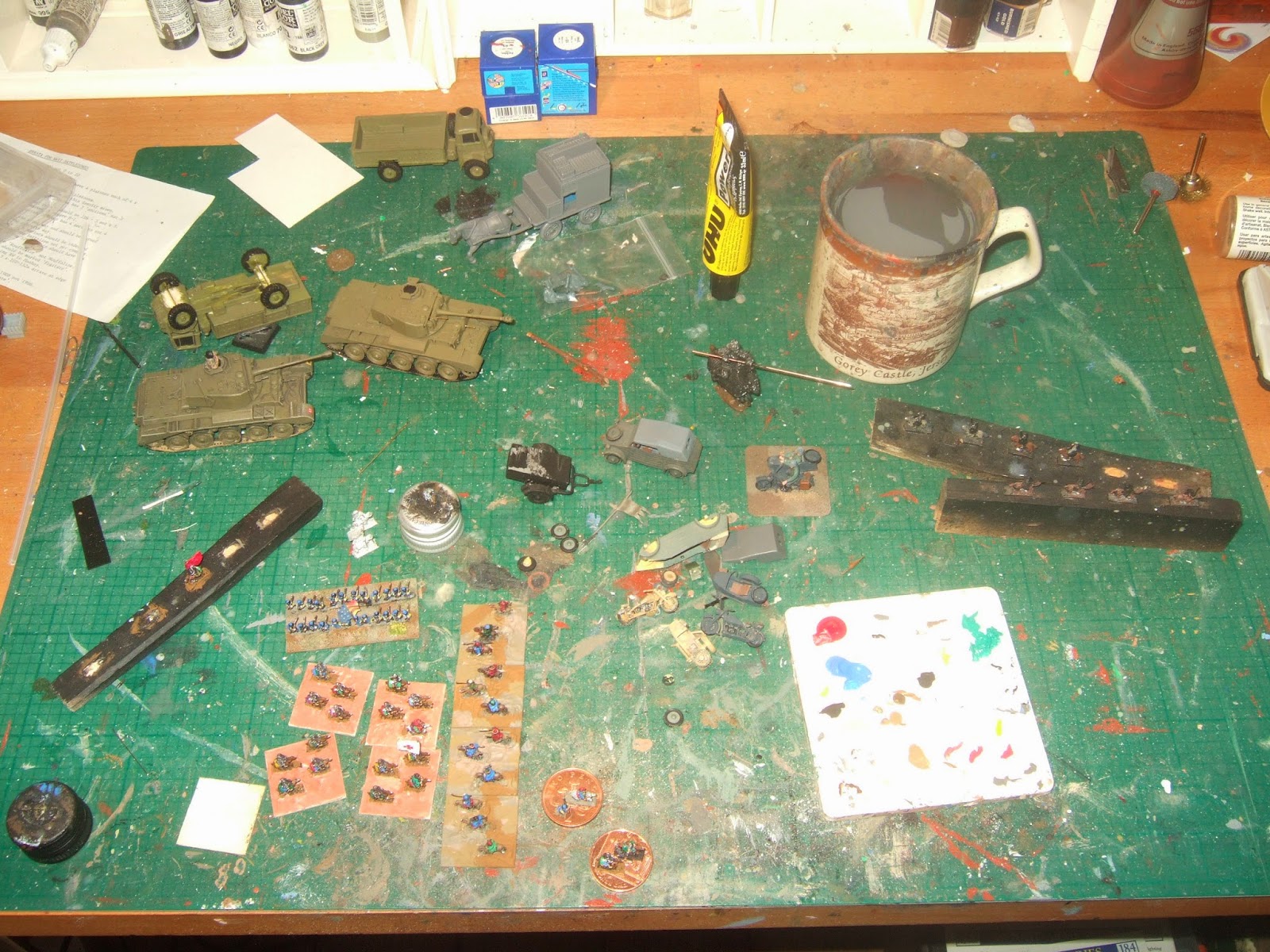 Currently on the workbench are: a couple of 20mm British trucks and two Comet tanks, bits of 20mm Kubelwagen, a motorcycle combo and a trailer needing resurrection, some 6mm Cossacks and Polish pancerni and Generals from Baccus, also from Baccus some Late Roman light cavalry, and a 28mm scale Sarmatian Cataphract from Warlord.  Oh and a WW1 German engineer wagon for Rommel's Route to Verdun.

I'm gradually getting my 20mm scale mid- to late-WW2 German vehicles repainted in a common shade of dunkelgelb; the dark yellow colour most commonly used as a base coat.

My recipe is from a posting on The Guild and uses successive layers of GW Stormvermin Fur (was Charadon Granite), Baneblade Brown (was Khemri Brown), and Vallejo Iraqi Sand (has always been Iraqi Sand).  The disruptive patterns on top are then Reflective Green and Saddle Brown, both from Vallejo.

I took a couple of pictures of the progress so far.  It's not a coherent unit but the random selection of models I've acquired over the years, some because I built them as modelling projects when I was a kid. I call them Kampfgruppe Odsenzods.... 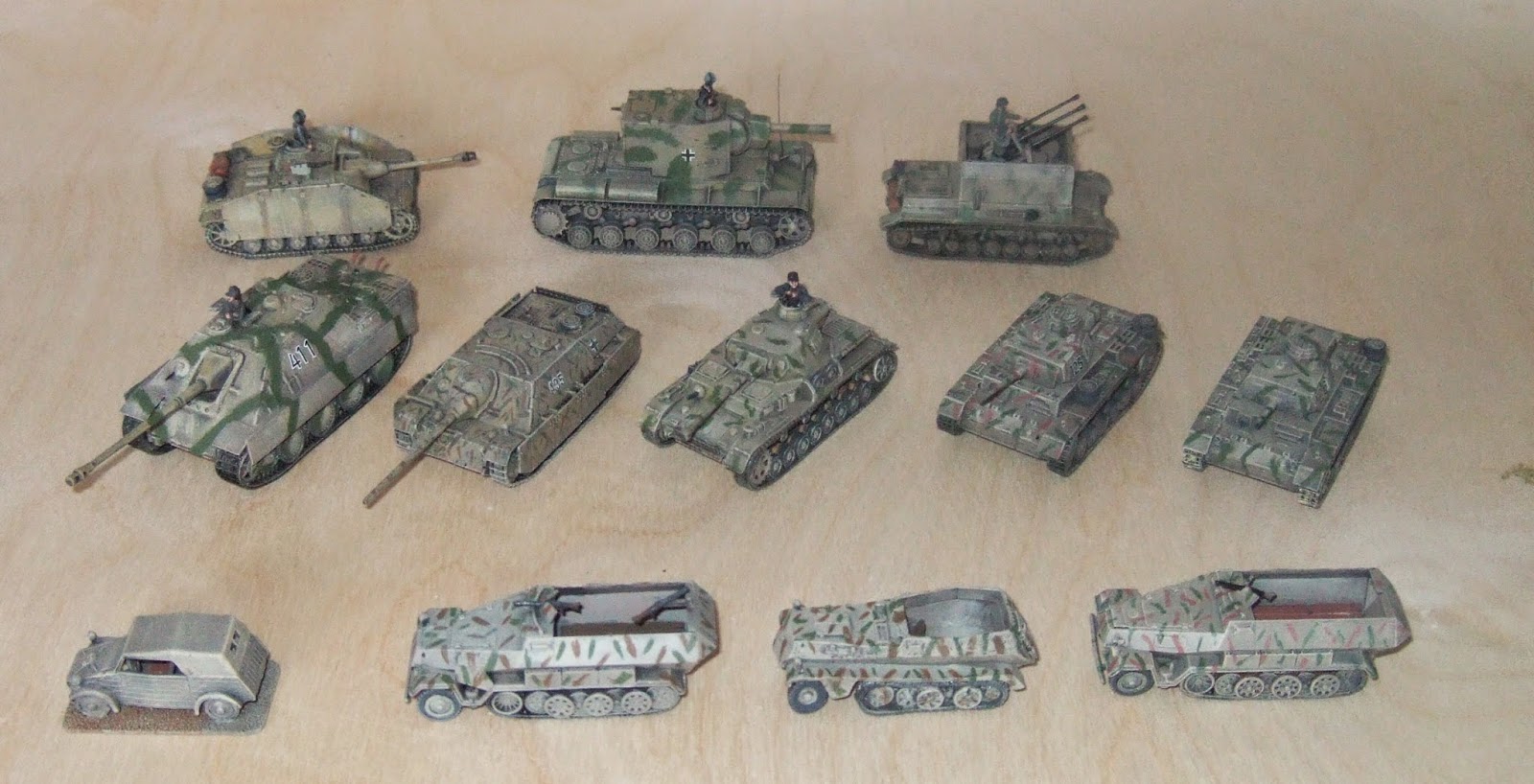 Also of interest here is the different appearance of the two pictures.  They were taken in identical lighting conditions but the one below has my camera (a Fuji Finepix F11) set to macro mode. 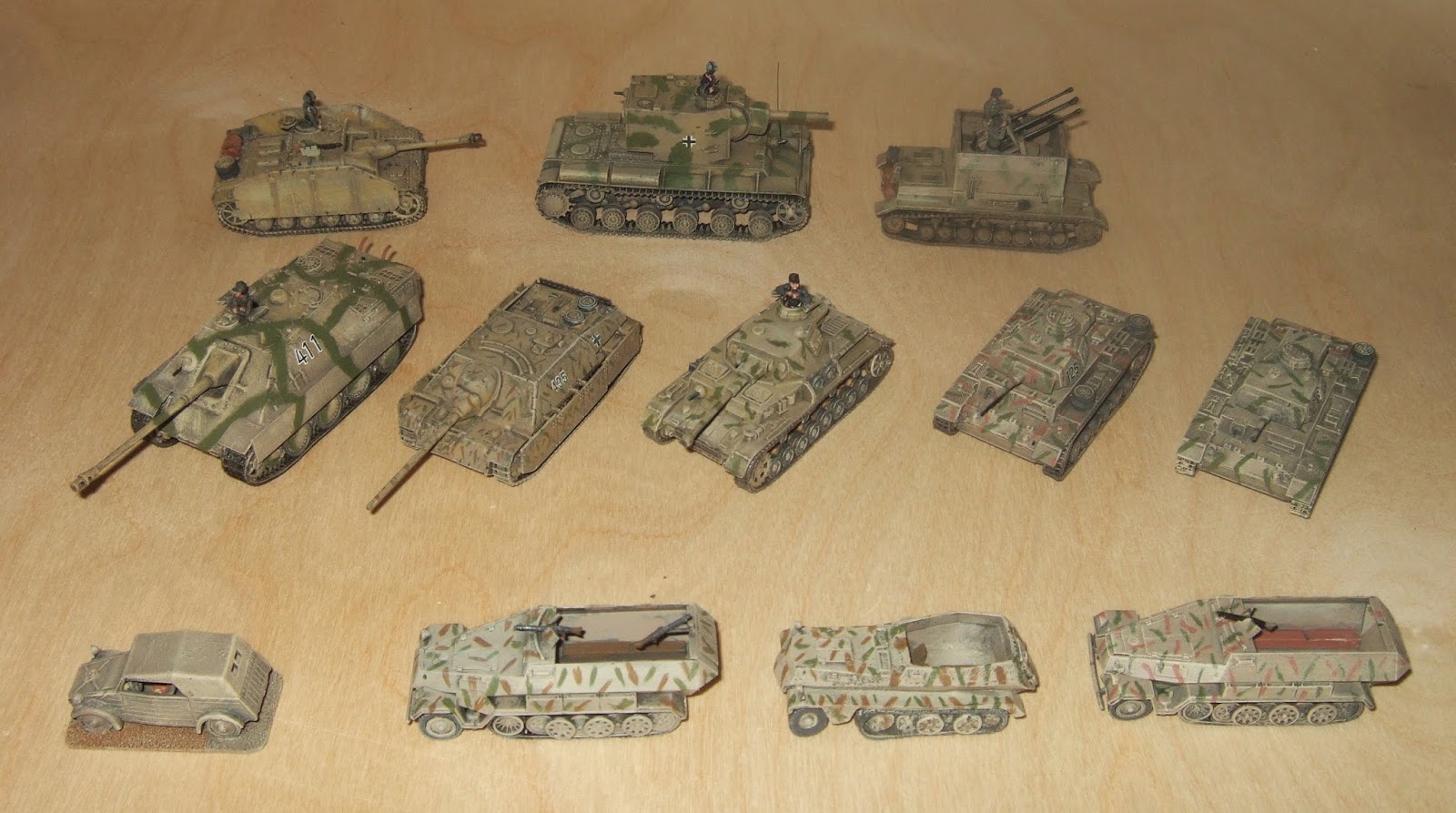