This rocky outcrop is from a child’s Lion King play set.  At £2 it seemed like a good buy for future use in some Pulp Alley game.

It’ll want a little work.  I shall probably have a go at painting it with my usual textured masonry paint. 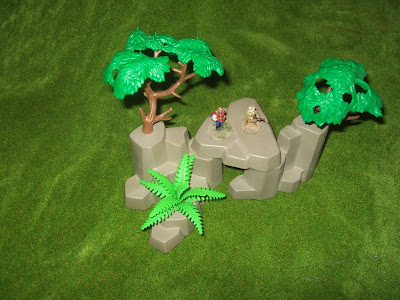 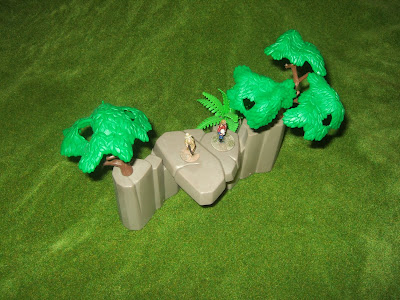 Posted by Counterpane at 4:43 AM No comments:

The End of Balin's Colony

The Saturday Afternoon Wargame™ returned to Stately Couterpane Manor this month with an interesting, if brief, game of Song of Blades and Heroes.

Our scenario was designed to use my recently completed dungeon sections and Jamie’s Tolkienesque Dwarves and Goblins.  The excellent tolkiengateway.net provided the background.

For five years from 2989 TA, the colony of Dwarves led by Balin was able to expand its control over the previously lost mines of Moria.  It seemed the Dwarven city could be returned to its brilliant heyday but then, in 2994, Balin was killed by an orcish arrow in a battle near Mirrormere.  Balin’s kin recovered his body and fled into the city, barring the East Gate behind them against hordes of orcs.

Using entrances unknown to the Dwarves, vast numbers of golblins swarmed through Moria capturing the bridge of Khazad Dum after a fierce battle that left many of Balin’s kin dead.

Oin led a group west to attempt a break-out by way of Durin’s Doors but he was killed by the Watcher in the Water.

In our game the remnants of Oin’s party are now making their way back to the Hall of Mazarbul where the last of the colony, now led by Ori, are likely to make their final stand.

We had 400 points of Dwarves entering by way of the western corridor. Their aim was to cross the central hall and exit via the staircase at the northern end.

200 points worth of Goblins started in the central hall with the aim of preventing its passage by the Dwarves:

Another 400 points of Goblins enter from the eastern corridor, also with the aim of cutting off these Dwarves.  They have a Cave Troll!  No, in fact they have two Cave Trolls!

Posted by Counterpane at 4:59 PM 2 comments:

It's definitely been a big weekend for foamcore here at Stately Counterpane Manor.

First off I've made considerable progress on some dungeon corridor modules to join onto my original Slave Pit of Elz Ast which is now to stand in as a hall somewhere in Moria (of which more later). 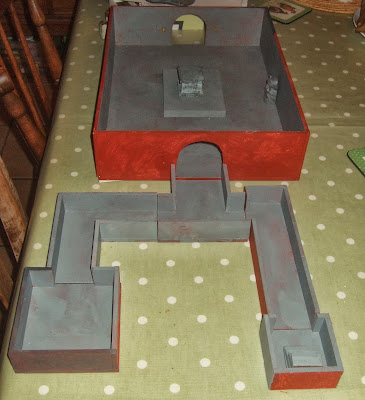 And then there's the first four of the dozen or more middle eastern buildings I'll need for the Turkish Quarter of Tcherbevan in next year's Andreivia game. 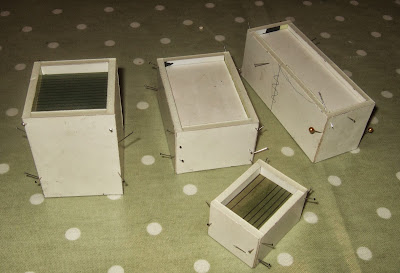 So far these are just simple foamcore boxes, some of them with scored card roofs.  As you see them now they are held together with pins while the PVA dries.

I'm going to need loads more of these to cover the ground area of the Turkish Quarter (about four square feet).

The Henschel Hs-126 of WW2 vintage was until recently an exhibit at the Air Museum of the Andreivian Air Pioneers Organisation outside Tuzkhur. 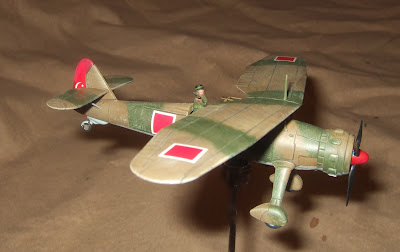 It has now been made airworthy by disaffected Andreivian Turk engineers and placed at the disposal of a militia group fighting around the capital. 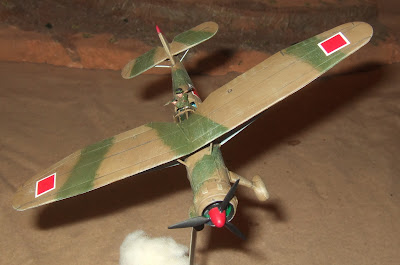 The model is the old Matchbox kit modified by the addition of an Orion RPG gunner in the navigator's seat, a new radio and cockpit detail (from a Matchbox Wespe) and the mounting of a rare earth magnet at an angle under the cockpit floor.  This allows the model to fly at a dynamic, canted angle on my flying stand. 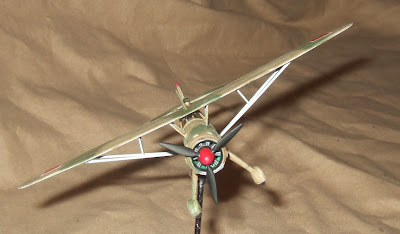 Posted by Counterpane at 2:36 PM 3 comments:

Another Box of Delights

Tim Gow has kindly passed on to me another box (or in this case a tin) of mostly plastic soldiers to root through. 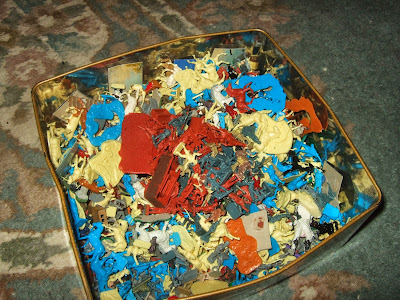 So far I've found one-and-a-half ancient Egyptian figures that will become statues in a Pulp game and a bag of Groo the Wanderer figures that will probably form an interesting Song of Blades and Heroes warband.

The rest are likely to be passed on to some deserving recipient at a future show.

Got a new motor

I found a 1/72nd scale Carorama Toyota Landcruiser at the local flea market on Monday.  Ideal for downtown Tcherbevan. 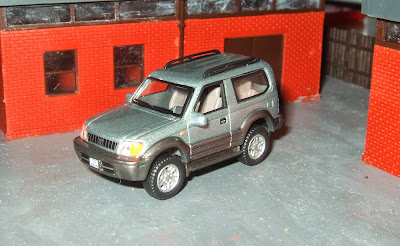 The 1989 edition of the Lonely Planet Guide to Andreivia has this to say about cars:


In recent years Andreivia has become one of Europe’s leading markets for stolen cars. It is believed that one third of all cars stolen in Germany end up in Andreivia under false licence plates.

So great is the number of high performance cars available on the Tcherbevan black market that the city’s police force recently took delivery of a fleet of high powered  Mercedes saloons for its pursuit team.  Unfortunately these vehicles remain in storage following the discovery that they had been stolen to order in Stuttgart.

Posted by Counterpane at 12:22 PM No comments:

We now have a date for the next Crisis Point game at Dungworth.  Crisis Point: Andreivia will take place on Saturday 12th and Sunday 13th April 2014.

By way of celebration, I thought I’d post some pictures of Andreivian materiel and terrain.  In particular there are some pictures of the big bridge I envisage spanning the river in down-town Tcherbevan.  These are at the request of Richard Phillips who has recently been appointed Chief Town Planner for the Andreivian capital. 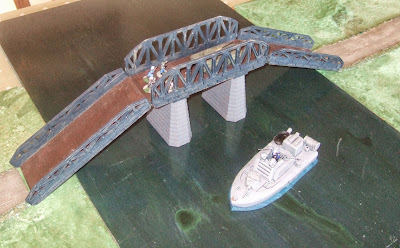 The bridge was a child’s toy I acquired at a flea market in Sheffield.  It’s in pretty desperate need of repainting.

It’s 66cm long overall with the central section 23cm long by 10cm wide.  The central span is 10cm above the water and the side girders are another 7cm higher than that.  Hopefully these dimensions will fit with Richard’s plans.

We see the bridge here being crossed here by some of the Andreivian Turks’ foreign Mujaheddin allies.  They have a acquired an ex-Andreivian Army BMP-2 from somewhere.  An Andreivian Navy gunboat patrols below. 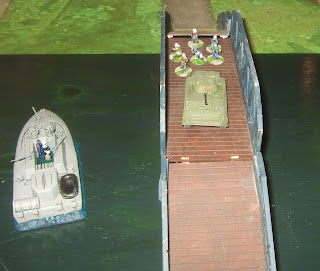 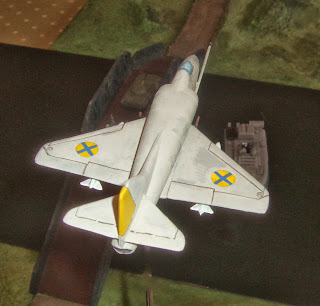 And an Andreivian Army Type 61 moves up to dispute the crossing. 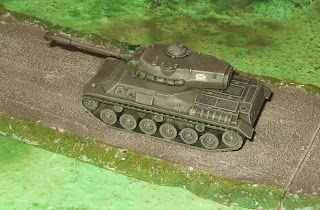 Posted by Counterpane at 8:42 AM No comments:

Post-Berkeley I’ve been in a bit of a malaise as far as painting goes, not helped by a glut of plums on our tree that needed processing.  That said, three jars of plum schnapps, six of chutney, and a plum clafoutis later I’ve got back to the workbench.

The Henschel 126 is progressing.  I don’t want to reveal too much until it’s finished though.   You’ll have to wait for pics.

I have finished some figures though.  Ian Shaw is working on some Andreivian Armenians for Crisis Point but we’ll need at least two lots as the scenario has them split between two areas.  I looked through the plastics I have knocking around and came up with this Armenian light mortar team. 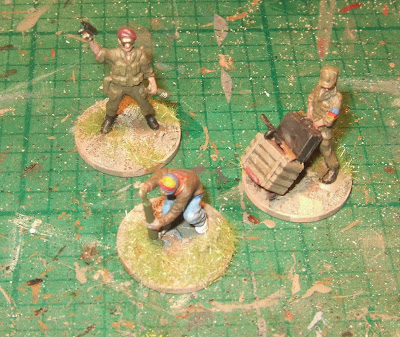 The commander is an unmodified figure from the Orion Chechen Rebels box.   The ammo carrier is also Orion, from the Russian Federals set.  The original figure is depicted urinating (others in the set are clearly drunk) but he’s teamed here with a Dapol luggage trolley and a white metal Ppsh SMG of forgotten origin.  The mortar No.1 is a plastic figure I was given by Geoff Taylor.  I’ve painted his headscarf in the colours of the recently declared Andreivian Armenian Republic.

Finally, we have the start of a unit of Andreivian paratroopers.  I was looking through the Osprey on Warsaw Pact Elite Forces and noticed that the Airfix “British” paras would pass for 1960s Poles.  I had a box of the Airfix types looking unloved and figured that an elite unit like paras was likely (a) to be loyal to the Andreivian Government and (b) to be given the job of guarding key assets in the centre of the capital. 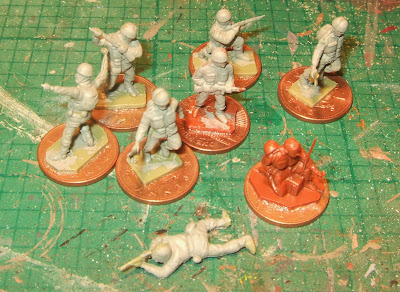 These are just a few.  I'm planning on emulating Will McNally by painting the whole box (plus a few extras) to give me a platoon-sized force.

They are going to get a speed-painting approach.  Undercoat/basecoat in Vallejo Grey-Green.  Helmets in Brown Violet (it’s a shade of green, honest), equipment in khaki, boots and helmet straps in Flat Brown, the usual flesh, woodwork and metal colours.  Over the top a wash of brown-dyed varnish and Vanya’s your uncle.