Having got a few Woebetides 18th century forces painted I decided to have a go at some solo Sharp Practice just to try them out.

So far I have the start of a European force (the red-coated infantry could be British or Irish-in-French-service) and some Woebetideus tribesmen. I decided to try something like the ambush scene in the Last of the Mohicans film.

The terrain was a simple road running through a cleared area between walls of dense forest. 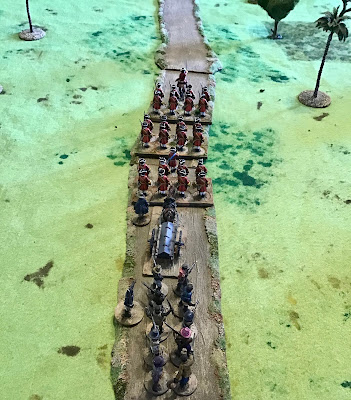 The European force consisted of three Groups of musketeers, an ammunition wagon, and a Group of ten militia acting as a train guard.

I started the game with no Euopean officers' cards in the deck. Instead, the Europeans had to use any flag cards to move along the road after the Tiffin card was drawn.  European Leader' cards would go into the deck on the first turn after a Woebetideus unit deployed onto the table.

This happened pretty much straight away with a group of Woebetideus skirmishers opening up with their carbines at long range. 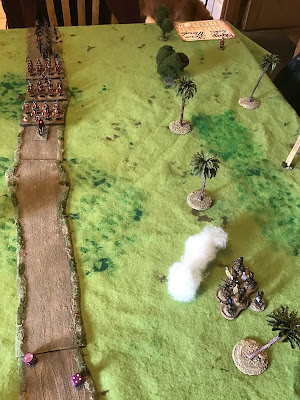 This was followed by a random event which saw a pall of smoke mask the front of the natives' position - probably poor-quality powder I guess. 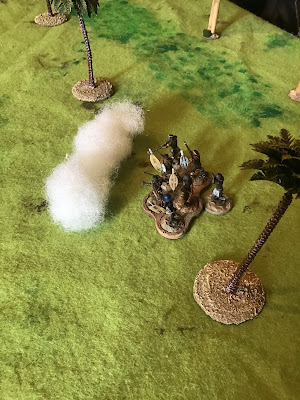 The European commander responded to this with commendable speed.  He quickly redeployed his men into a line facing the enemy. Unfortunately, this had the effect of exposing his right flank to a charge from the dense forest. 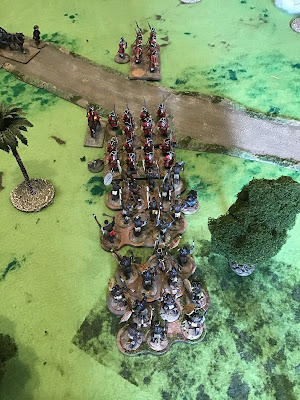 Using the Ambuscade rules, a large formation of Woebetideus tribesmen charged into the flank of the European line. The two right-had Groups turned to face and we fought a round of fisticuffs. 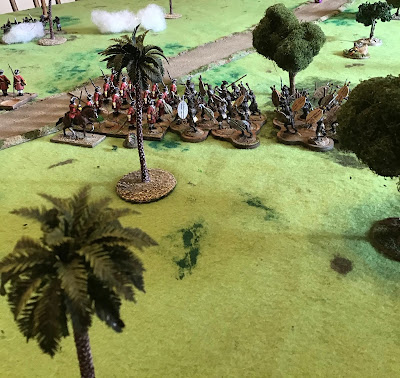 With the Europeans caught in flank and therefore losing half of their dice, the result was decisive. Both European groups were forced back 18" with heavy losses and their commanding officer was knocked unconscious. 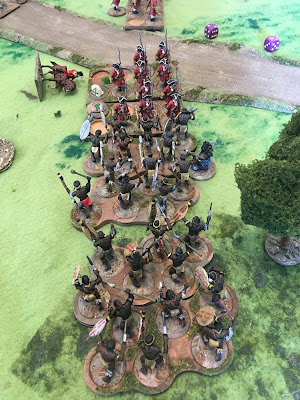 Before the Europeans had any chance to respond to this disaster, another group natives appeared on the same flank. By a freak of the card drawing, they deployed at the end of one turn and moved first on the following turn. Limited to two dice of movement by the dense forest they managed to move 11 inches towards the African conscripts forming the Europeans' train guard.

In one of those moments that Sharp Practice does so well, I then proceeded to draw three successive flag cards. This led to a movement random event for the Woebetideus. A dice score of six gave them an additional d6 inches of movement. Of course I rolled another six and the Woebetideus crashed into contact with the train guard. 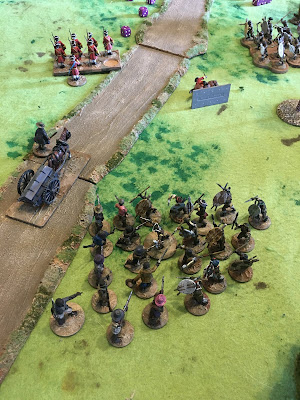 Again the result was one-sided.  The train guard managed to inflict more casualties than the flanked regulars had done but they too were driven off in disarray.

At this point the remaining European group was saved by the fact that I had to stop to take an important phone call. Clearly, though, this was going to be an easy Woebetideus victory.

The rules questions that came up were as follows:

What happens if you're deploying a Formation onto the table using an Ambuscade but you're in terrain that prevents you moving in formation?  I decided that both Groups in the Formation would enter the table but only the leading Group would get the three dice-worth of movement?

Speaking of which, do you still get three dice worth of movement if launching an Ambuscade from terrain that limits you to two dice-worth of movement?  I decided that yes, you do.

If a line Formation is hit in flank by a charging enemy, two Groups turn to face, one behind the other. Does this represent a break of formation that requires a roll on the Bad-Things-Happen table?  I decided that yes, it did.

When a Group takes additional Shock after falling back from Fisticuffs, does in immediately fall back further (or even rout) if excess Shock would indicate this? I guess it probably does but I didn't bother on this occasion as the result was already clear.

Posted by Counterpane at 3:32 AM No comments:

Until this weekend I'd never heard of Wargames Atlantic.  They seem to be a fairly new manufacturer making hard plastic 28mm historical, fantasy and sci-fi miniatures.

What's caught my eye is that they are offering for pre-order some Afghan warriors: 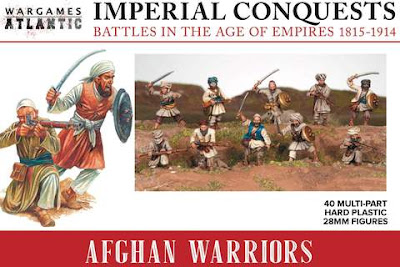 Going by the description they are aimed at gamers interested in refighting actions on the Northwest Frontier during the Victorian era but the box contains jezails and muskets that push the start of their usefulness back to about 1700.  Just what we want!

I'd suggest that these chaps might do for our "Arab" pirates or for sepoys in European service.

At £25 a box (with discounts for multiple orders) they aren't far off the price you'd typically pay for Perry or Warlord plastics.  A box of 40 figures would get you a perfectly good force for Sharp Practice.
Posted by Counterpane at 12:54 AM 2 comments: