I've not reported yet on the game of To The Strongest we (Gus, Ron, Leo, Arthur and I) played a couple of weekends ago.

I don't want to share too much here at this stage as it's one of the games I plan to run at Crisis Point.  However, here are a few pictures.... 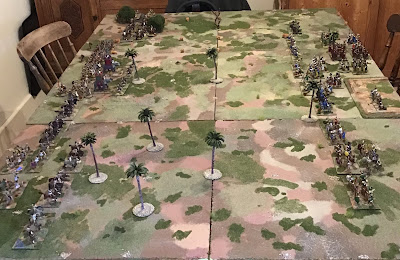 There's a real mix of figures in 25/28mm scale, ranging from very old Lammings to modern plastics from Victrix. 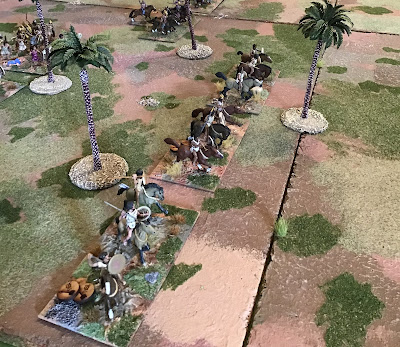 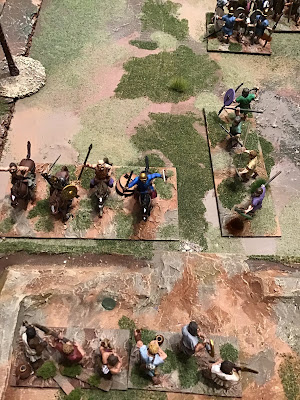 Posted by Counterpane at 11:49 PM No comments:

Email ThisBlogThis!Share to TwitterShare to FacebookShare to Pinterest
Labels: 25mm, 28mm, Ancients, To The Strongest!

I've been off work with equine flu but fortunately my condition's now stable.  (I'm here til Tuesday, try the veal).  So I took advantage of a day's convalescence to try out Shot, Steel & Stone.

This is the set of horse and musket rules in Henry Hyde's The Wargaming Compendium.  They are advertised as covering the period 1685-1845 so I figured they'd be spot on for my 6mm Great Northern War collection.

The rules use element bases and, at least in theory, individual figure removal. However, it's clear from photographs of games in action that most players have their figures permanently mounted on the element bases and use some means of tracking the loss of strength points.  I used a notebook with stylised depictions of each unit. 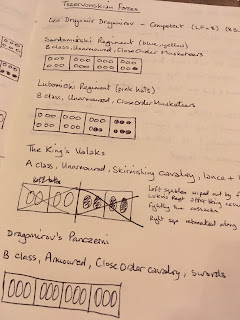 I ran a solo game based roughly on the scenario Henry uses to illustrate the rules in the book.  The forces used were bits and bobs of my GNW Russians and Poles transposed respectively into the imagi-nations of Zheltarus and Tszervonsk.

SSS (let's call it that) has varying sized units from extra-small (one base) to extra large (six bases).  This means that my four-base units, built with Maurice in mind, are "Large" in these rules.  This doesn't seem to be a problem though.

Also not a problem, as far as I can see, is the fact that my element bases are square rather then slightly wider-than-deep.

Anyway, on to the game.  Some forces of Tszervonsk were encamped at a bridge near the town of Lubomir (a centre of the Tszervonskian brewing industry).  They are led by the competent general Dragomir Dragomirov.  The camp can be seen to the left of the river in the picture below. 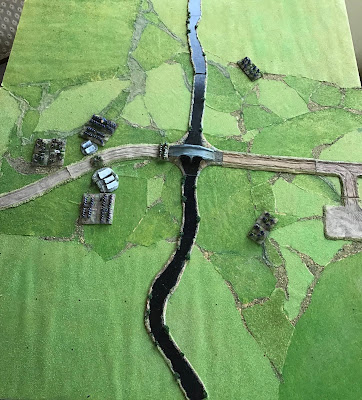 The only troops ready for trouble are two squadrons of the King's Valaks - A class, unarmoured, skirmishing cavalry with lances and bows in SSS terms.  They are patrolling the far side of the river.

Oh and a small patrol of the Lubomir Militia are guarding the bridge... 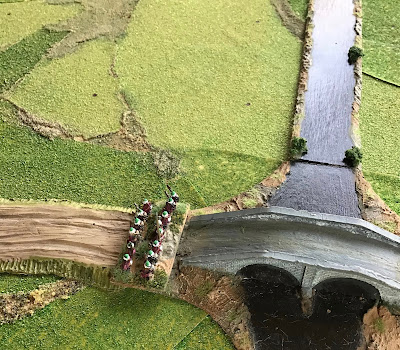 Approaching was a Zheltarussian detachment led by the hesitant Robert McCrumb.  We know he's hesitant having generated his character previously.  McCrumb has two infantry battalions, a regiment of dragoons, a regiment of cossack, and a couple of guns.

Turns are alternate in SSS.  The Zheltarussians went first and were able to bring on three units.  Hunni's cossacks dashed straight up the road making for the bridge.  The Poliakov Dragoons moved off to menace the right squadron of King's Valaks and Lukin's Regiment marched up the road.

Below we see the position before the first Tszervonskian turn.... 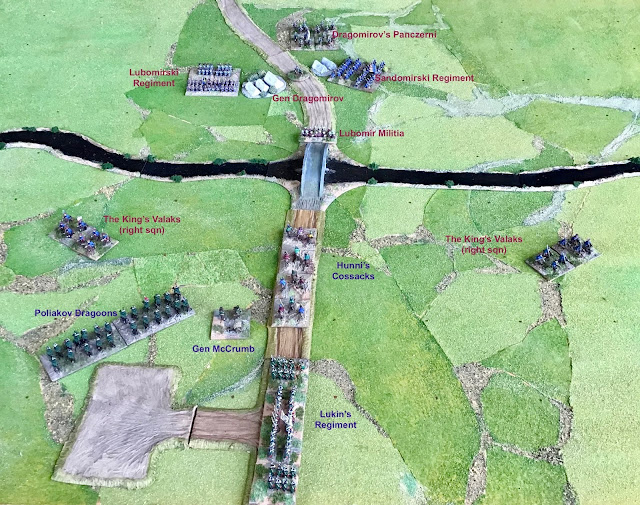 Things then got moving quickly.  The right squadron of the Valaks took a reaction test to see if they could charge the Poliakov Dragoons. Being skirmishing cavalry they didn't need ordering to do this being used to operating away from their general's direct influence.  Unfortunately they failed he test so badly that they ended up retreating right off the table!

On the other flank the left squadron were delighted to charge the temptingly exposed flank of Hunni's Cossacks.  The results were spectacular.  Half of the Cossacks were killed in the charge and the Cossack regiment disintegrated. 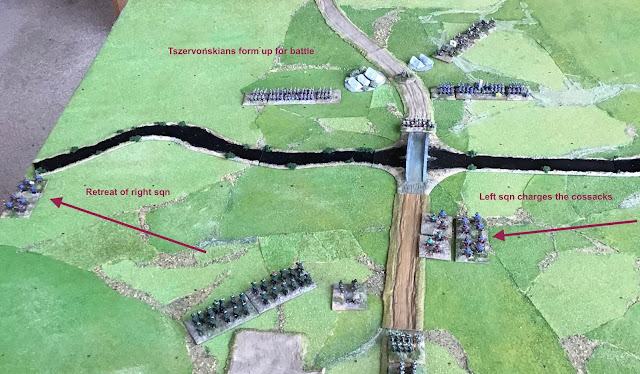 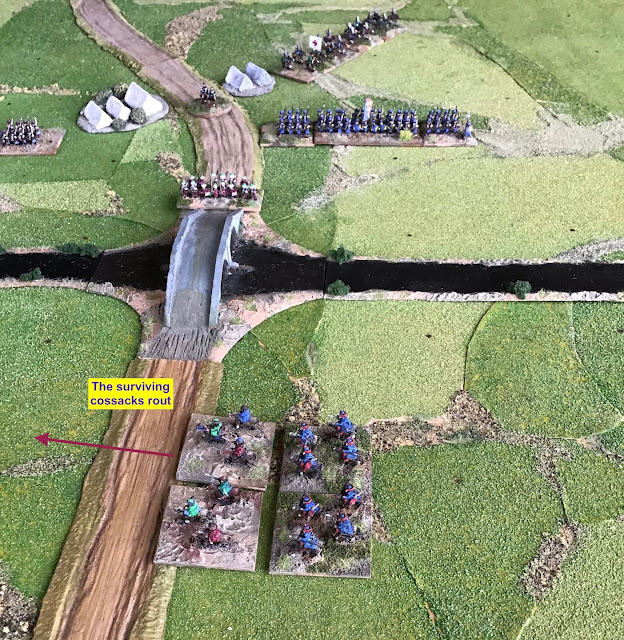 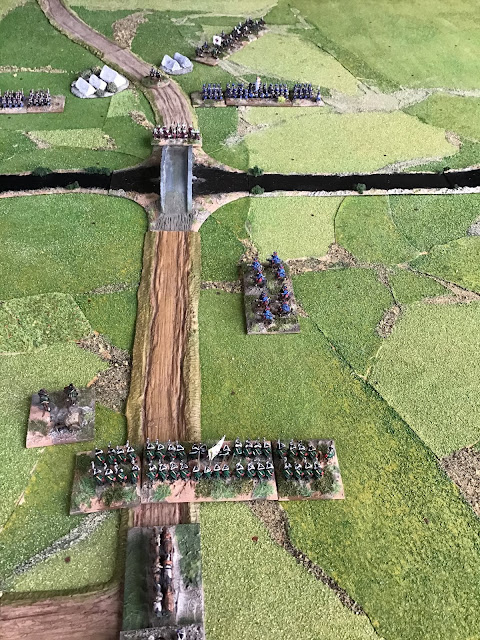 Combat is straight-forward.  For each base firing, roll a number of six-sided dice determined by the type of unit.  Modify the number needed to score a hit for things like range (three brackets), cover, target formation, and of course that old favourite "first fire".   The target then gets to try a saving throw for each hit.  The save number varies depending on who's hit you - 3+ against pistols but sixes needed if you're shot at by artillery. 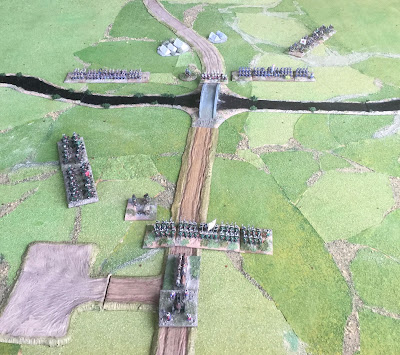 I took my time with the game, not hesitating to go away and read the book if I didn't understand how something was meant to work.

When I needed to stop we'd reached the point where both sides had sent cavalry units along the river looking for places where it could be forded.  Both were ultimately successful. 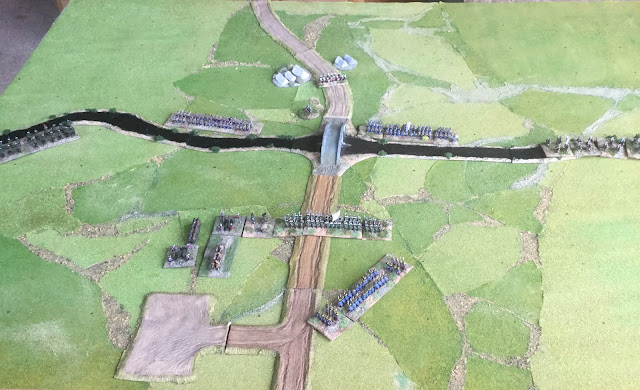 I decided that that the position was rather in favour of the Zheltarussians.  They had their two infantry battalions somewhat better positioned to take on the enemy horse whilst the Lubomirsk Regiment was in danger of being pinned against the river by the marauding Zheltarussian dragoons and decimated by the enemy artillery.

I enjoyed these rules and would like to get them to a Saturday Afternoon Wargame soon.

I still have a few queries.  A unit disintegrates when it reaches half-strength.  But is that half-strength in bases or figures/strength points?

I'm also a bit unclear on reaction tests to charge.  Hopefully an email to Henry will clear things up.

The first Italian platoon for the Menton 1940 game is finished along with a few support options.

For what began as a way of using up some Airfix Italian infantry I had going spare, this project is, as usual with these things, suddenly involving buying a load of stuff I didn't have.

The Italian Fucilieri platoon has an odd structure.  It's divided into two Squadri, each with two machine-gun teams and an eight man rifle team.  The platoon HQ is just a Tenente.

Each MG team has a three guys manning a Breda M30 LMG and an extra rifleman and the two teams are led by a single Caporale. 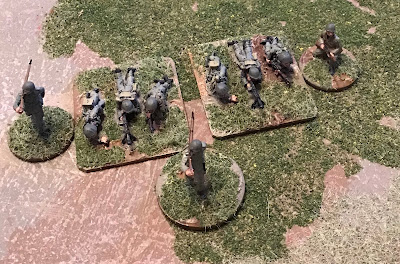 The three-man LMG teams are from Dixon Miniatures.  The spare rifleman at the right end of the line above is an Airfix Japanese infantryman with a transplanted Italian head.  It's not clear in the photo but he's wearing a rather natty black, polo-necked sweater under his jacket. 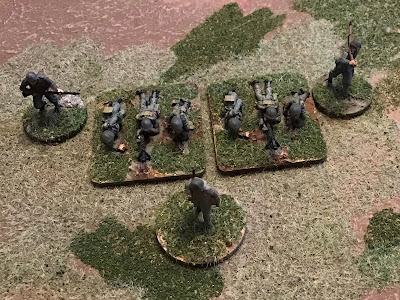 The second Squadra's MG teams are led by a Caporale whose an Airfix Japanese infantryman simply repainted in Italian colours.  For me these are Vallejo Green Grey for the cloth items and German Fieldgrey WWII for the helmets.  Some of the knapsacks are in Vallejo Khaki. 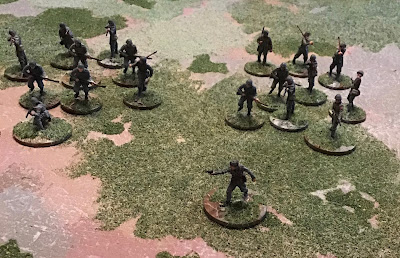 The rifle teams are mostly Airfix Italians with a few helmeted Japanese thrown in.  Bothe uniforms have cloth puttees and the helmets are similar in shape so I think this works OK.

I've done a few support choices for the Italians.

I'm trying these days to make sure I have some wounded figures to show when Leaders are wounded in Chain of Command.  This guy is an Airfix Australian with an Italian officer's head transplanted on and with a little carving to correct the shape of the puttees. 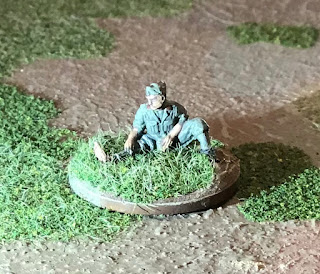 Again demonstrating how a "cheap" army has led to a number of additional purchases, I went and bought the Italeri Alpini box.  Removing the feathers from their steel helmets I end up with a number of useful models, although they are a tad larger than their Airfix brethren.

This muleteer will do service as a medical orderly in Chain of Command games. 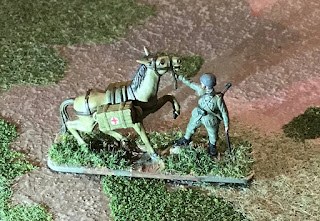 Last up we have this flamethrower team.  The flamethrower crewman himself is an Airfix German with yet another head transplant.  I've painted his tall marching boots as puttees. The Airfix Italians box is over-generous with SMG-armed men and I've used two of them here. 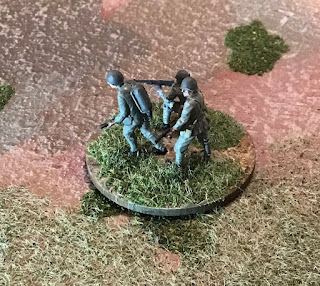 All of the men have dark red (Vallejo Burnt Red) collar "flames" as they will be used to represent to troops of the Cosseria Division at Menton.

We have five different games on offer, some of them consisting of multiple sessions so it should be very possible for people to swap between games over the weekend:


The game slots across the weekend could be as follows:


If the Beirut and Gallipoli teams (those who are there Saturday) want to at least start setting up Saturday evening after their Saturday games are finished I’m sure we can accommodate that.

Posted by Counterpane at 4:43 AM 4 comments: