Fed up with building terrain for Crisis Point, I spent some time yesterday evening painting a couple of 28mm figures.  These are figures from the Artizan Designs' range entitled Thrilling Tales.

The first figure is from the Ministry of Ungentlemanly Warfare pack.  He's simply painted with everything except the face and tie just blocked in with no highlighting at all. 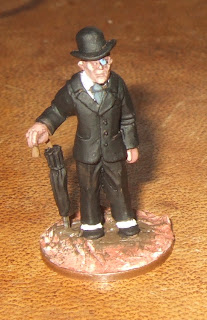 The next guy is also by Artizan but from the Enemy Agents pack.  he's had some very basic highlighting added to his black clothing. This looks awful in the photographs but is hardly noticeable in real life.  In which case it's probably not worth doing! 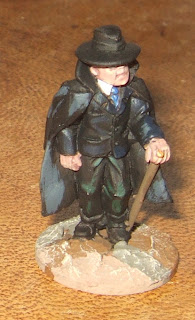 Both figures need varnishing and the first needs his base painting.

I'm thinking my Pulp villains might be some kind of international conspiracy of influential men preparing for "the forthcoming war against Bolshevism".  I quite fancy the idea of the Heroes' opponents including the Gestapo, Japanese agents, and elements within the British Establishment.
Posted by Counterpane at 12:20 PM 2 comments:

Many More Rivers To Cross

I've been blithely assuming I just need to add some river junctions and some marshy river source modules and my existing stream units will be sufficient for my table at Crisis Point: Arctic Strike.  However, today I got out the existing sections and decided I'm about 14 feet short of what I need!

So in between helping Millie build her decorated egg project for school, this FedEggs delivery van: 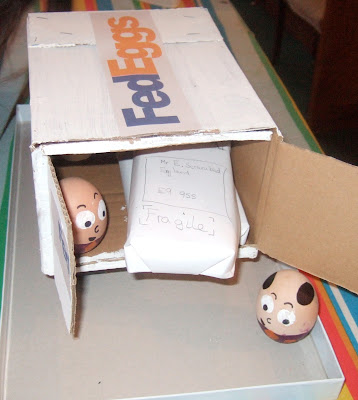 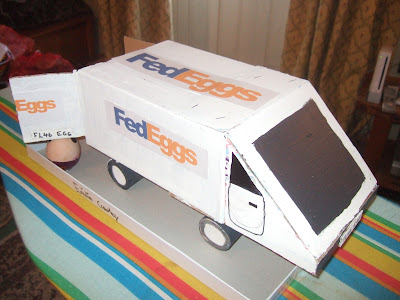 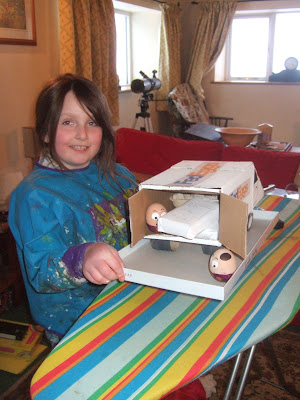 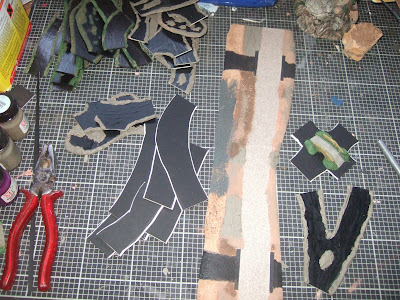 I'm having to adopt a high speed approach.  No painting the surfaces of the river sections - I'll just rely on the fact that the card is already black and will, with a coat of varnish, make a reasonable river bed.  A bit of ready-coloured 'gloop' for the banks and some static grass will have to do.

Posted by Counterpane at 10:51 AM No comments:

With four-feet-deep snowdrifts around the house I didn't go out much yesterday.  Instead I took advantage of a day's scheduled leave to make some more progress on the terrain for Crisis Point: Arctic Strike.

First up are these stream sections.  My table requires at least six streams emerging from the high ground and running down to the fjord.  I'm not actually planning on representing the slope as it's not tactically significant but I do need marsh areas from which the streams can start.  Here they are along with some stream junction pieces to join my existing modules.  So far they're just black card and Tetrion-based gloop.  Painting and flocking next. 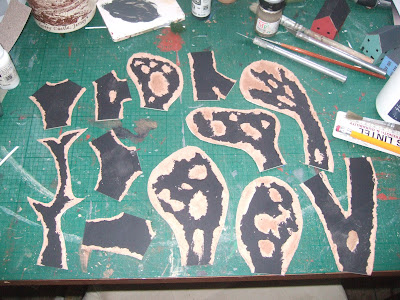 I've also made some progress on the Medby village module. 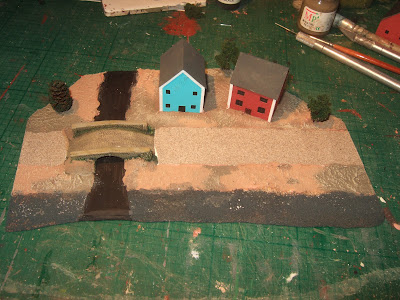 I need to build more houses for the other villages and the town of Bjerkvik.

Posted by Counterpane at 3:37 AM No comments:

Not much progressed made on anything much of late due to pressure of real life stuff but I have managed to have a session laying out the fjord coastal terrain for Crisis Point 2.

The water is a couple of blue painted and varnished MDF sheets I've had for years.  Can't remember which game I created them for originally.  The coast strips are thin MDF or hardboard saved from old picture frames or desk drawers.  The road surface is medium (P120) grade Aluminium Oxide sanding paper.

Posted by Counterpane at 2:02 PM No comments:

In the jungle, the mighty jungle...

Further progress on the jungle bits has followed the acquisition of more glue gun sticks. 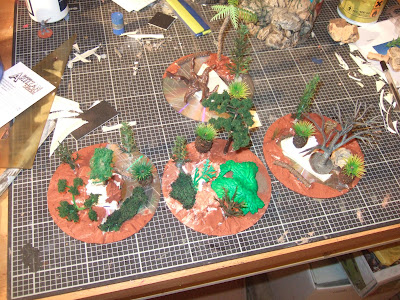 And today's useful tip is: try not to burn the end of your nose with a hot glue gun!
Posted by Counterpane at 2:47 PM 2 comments:

* with apologies to Radiohead.

I've had a couple of cheap hot glue guns for years but, until now, never found anything that they seemed to be much use for.  The answer is - glueing artificial plants to old CDs to make jungle modules.

Here are a few under way following the advice of Diane Sutherland in issue 17 of Battlegames. 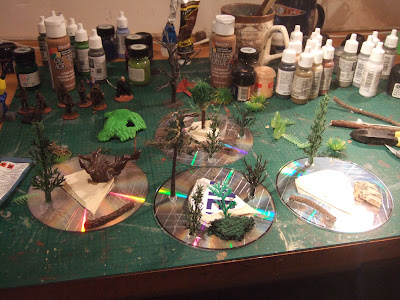 Unfortunately, having discovered what hot glue guns are for, I've now run out of glue sticks for them!  Grrr!
Posted by Counterpane at 3:01 PM 1 comment:

I'm teaching a young neighbour to paint figures at the moment.  He's painting (green-skinned) goblins but I wanted to show him the technique I use for human faces so I grabbed a Mexican peasant off the shelf and painted it alongside him.

I enjoyed painting the 28mm Foundry figure so much that I did another one last night.  Here they both are. 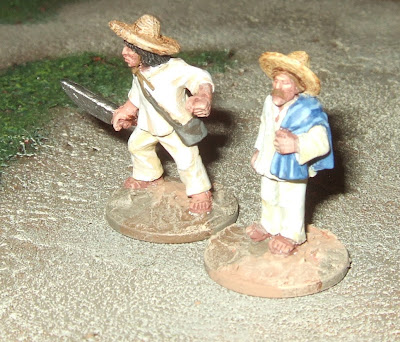 They're done apart from varnishing and base-grassing. 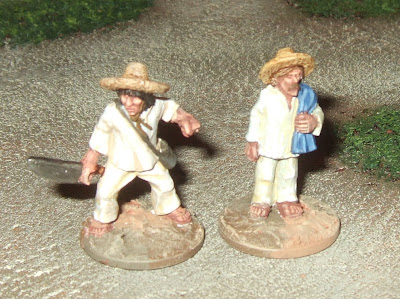 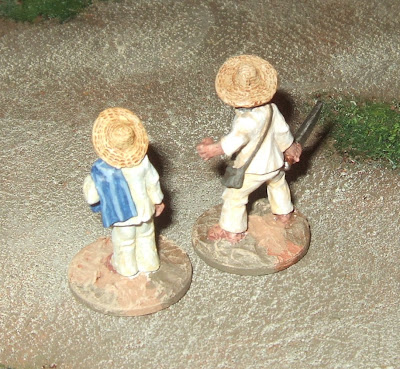 Posted by Counterpane at 11:32 AM No comments:

The sci-fi scenery I bought at Hammerhead is now painted. 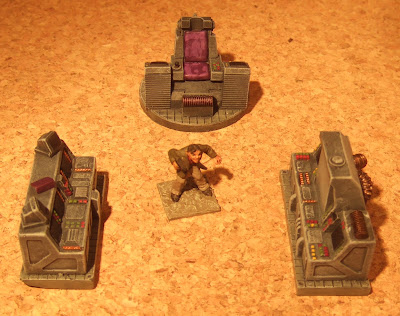 It's three resin modules by Grendel which I got for £4 from the Ainsty stand.  Good value I reckon. 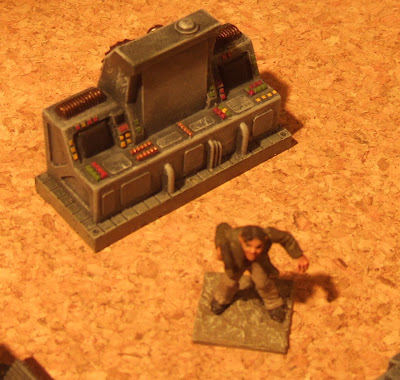 I've used a fair amount of bonze metallic because I thought it helped give the equipment a pulp look rather than the 1970s sci-fi I guess it's based on. 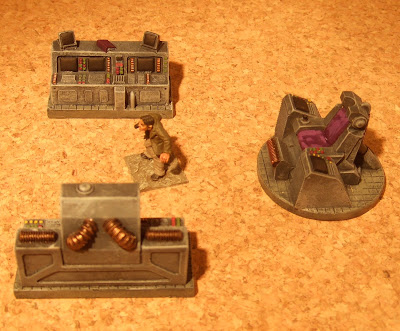 The figure included for scale is an old GW Call of Cthulhu casting. 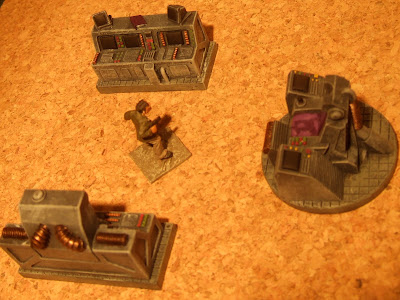 Posted by Counterpane at 1:44 PM No comments: