As the title says, I've made more progress on producing the terrain for a future game set in the ruins of Riga's suburbs in 1812. 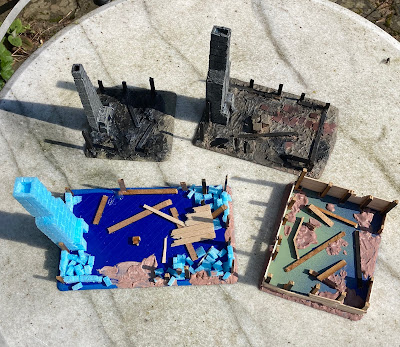 As you can see the second building is now complete and I've moved on to numbers three and four. 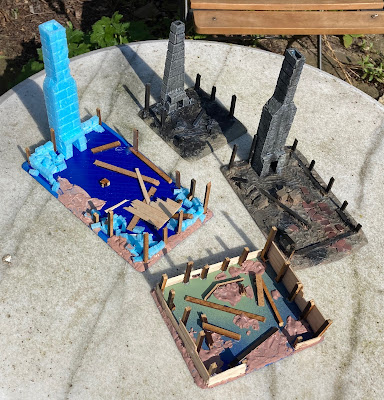 As before, the materials are PVC board, Firedragon foam sheet, and off-cuts of MDF. Oh and the burned-out shed (bottom right in the pic above) has its remaining walls made from coffee stirrers.

There should probably be more ash and rubble in and around the building footprints but there needs to be a compromise if units are to move within them.

Update: This afternoon I’ve started on a partly burned-out tower to add to the suburb: 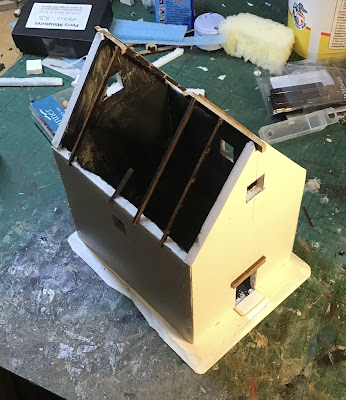 This is made with foamcore and off-cuts of MDF on the usual pvc base. 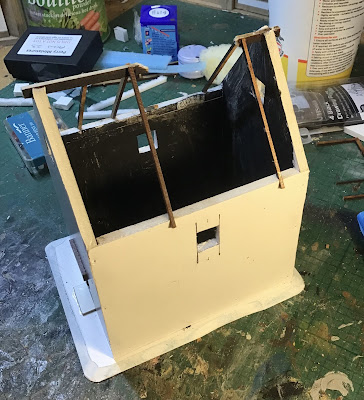 Further inspired by Youtube model-making videos I went out and bought myself the Airfix Folland Gnat in 1/72 scale.

We used to go to Anglesey quite often for summer holidays when I was a kid and we'd see Gnats flying from RAF Valley. On one holiday my Dad and I built a Me262 kit and then bought a Gnat kit from a toyshop, probably in Caernarfon. Unfortunately the kit got left on the rear parcel shelf of the car in direct sunshine and it warped horribly!

Despite this, I have fond memories of the Gnat (I think Airfix sent us a replacement) and I thought it would be nice to build the newer Airfix kit of the type, particularly as it comes with markings for a 4 OTU aircraft based at Valley.

Airfix call this a level one kit (presumably based on the number of parts) but I have to say this is hopelessly unrealistic.

It didn't build too badly, though I found the port-side jet intake didn't fit well and needed some filling as did the nose in front of the cockpit. 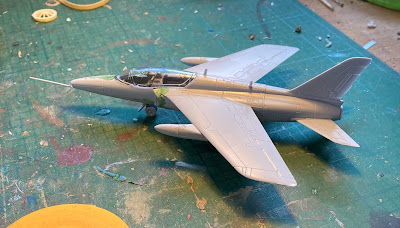 After building the FW190 straight out of the box I decided to do a little bit of extra detailing on this model. I added fine wire firing handles and masking tape seatbelts to the ejector seats. 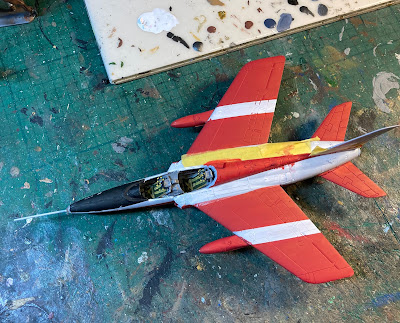 Where the kit did, for me, step way outside the realms of the level one kit was in the paint job and decals. Any beginner would struggle, I feel, with a paint scheme that needs some pretty complicated masking. In places the painting diagram doesn't show the lines of demarkation between red and white areas at all well.

I should probably have got myself a white rattle-can and sprayed the whole aircraft that colour first.

As well as the complex paint job the kit also comes with more than 60 individual decals; some of them only a millimetre or two across. In the end I decided to forget about most of them and just get the model to a reasonably finished condition. 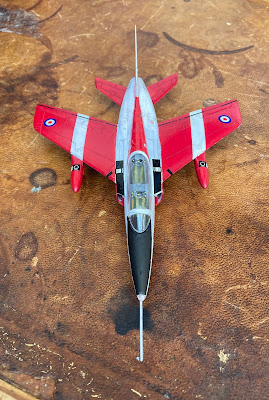 All in all I've found this kit a rather discouraging one to build. I'm trying hard to regard it as a learning experience. If I see the same kit in the alternative, and simpler, Yellowjacks Display Team colours I'm tempted to have another go and see if I can do a better job next time. 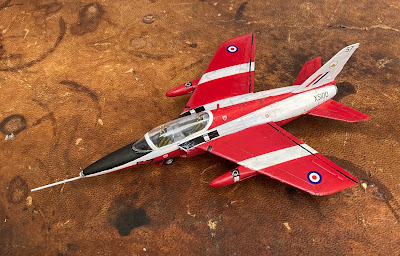 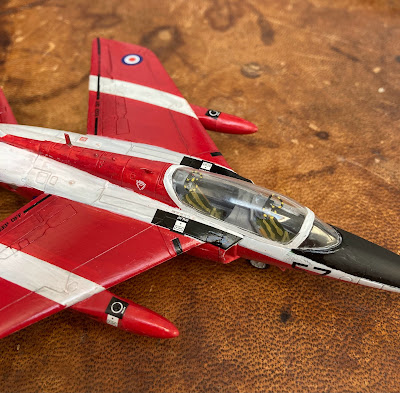 Posted by Counterpane at 7:37 AM 2 comments:

I'm making a start on building a section of the the burned-out suburbs of Riga for the Sharp Practice games Richard P and I have planned. It's also something I may run at a future Lardy Day.

On 24 July 1812 the French army, in the form of Marshal Macdonald's X Corps, moved to threaten Riga. In line with a plan previously discussed with Minister of War Barclay de Tolly, von Essen, the military governor ordered that the Moscow and St Petersburg suburbs of the city be torched to deny their cover to a besieging army. The fire soon got out of control, however, and destroyed much of Riga-outside-the-walls causing great hardship to the residents.

I envisage a night-time operation involving opposing patrols stalking each other through the ruins. I have a 4'x4' cobbled city mat that should be ideal for this.

This painting gives some idea of the scene before the fire... 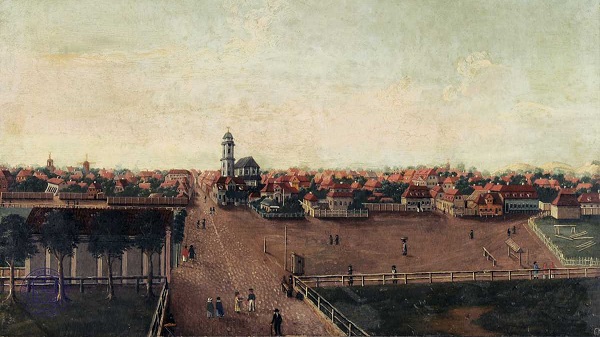 And this one of the fire at its height... 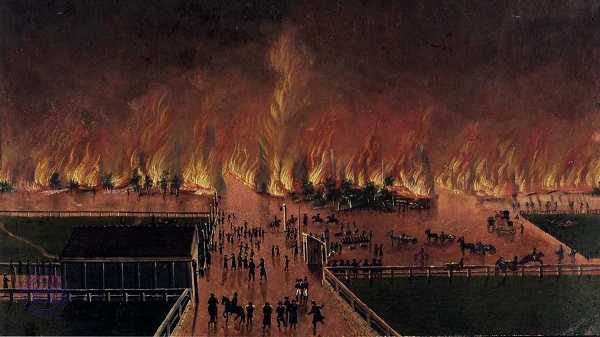 Having looked at a few photographs of burned-out villages made of largely wooden buildings, the overwhelming impression is of a forest of chimneys left standing among the ashes.

UPDATED: Here's yet another picture of the same scene - this time after the fire: 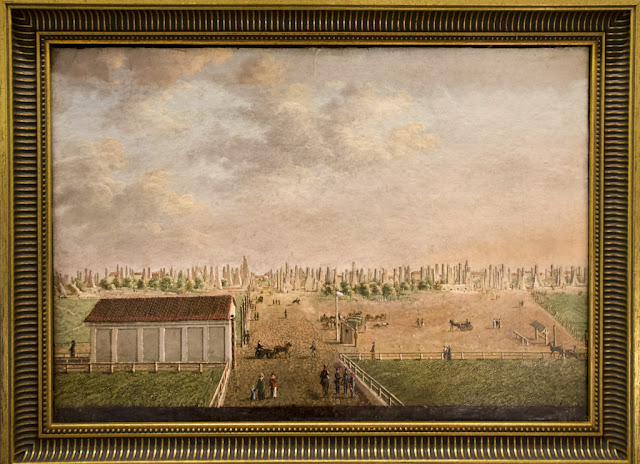 That's the effect I'm going for. 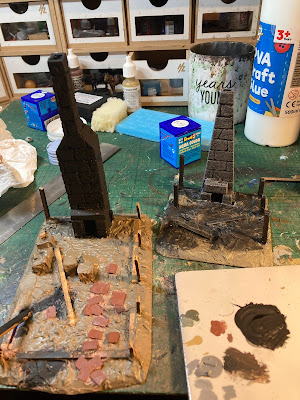 The one on the right was a first test piece. The one on the left is the first of the production run and is work currently in progress.

As I usual for my buildings these days, I'm using a base of PVC board covered in Tetrion. The chimney is made from Firedragon Games stone-textured foam sheets. The remaining wooden beams are broken pieces of MDF "sprue" left over from various building kits. I'm adding some roof tiles from thin card.

I don't think I'm going to get to the point where I can cover an entire 4'x4' board with such ruins. Looking at the paintings I can certainly justify some animal pens and other open areas. Maybe a stream flowing towards the Riga River (by that time part of the city's protective moat)?

Posted by Counterpane at 2:43 PM 2 comments:

At the tail end of February Gus, Phil, Andy, and Richard P came over to Stately Counterpane Manor for a first go at Rogue Stars. 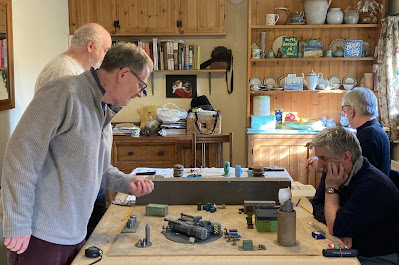 Rogue Stars as published is very much a two-player game. The initiative system is fun and great at keeping both players involved in the action all of the time but it won't easily work with three or four players. Although the online FAQ suggests a solution, I didn't want to risk my players' first experience of the game being spoiled by this not working properly.

So I set up two boards so we could do two one-on-one games in parallel. My old length of Pavis city wall formed a handy barrier between the two. 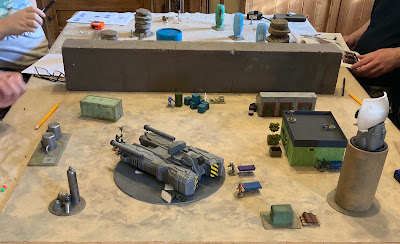 One of the boards was the starport - a chance to use my homemade shuttle craft. 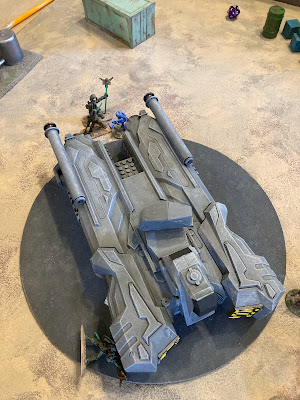 Andy ran a street gang (the Undercity Hivers) trying to smuggle three crates of contraband across the starport while Gus was in charge of the Okh - kind of police-for-hire; in my mind vaguely based on the Judoon from Doctor Who.

The other board was a wasteland area that had been used to set up a hazardous chemical storage facility. 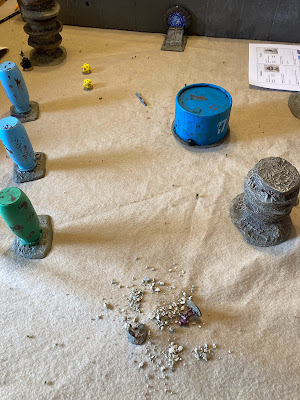 We used the Get to the Ship scenario on this board but the "ship" was replaced by a Stargate. This was the first time I've used the model that came as a souvenir of a long-ago Berkeley Hordes of the Things tournament. 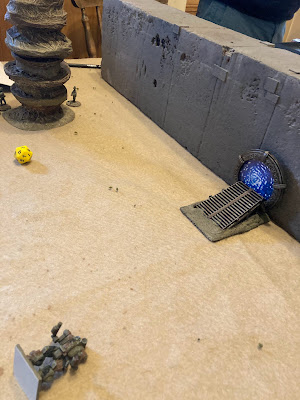 In this game Phil took on the role of Commisar Lukan... 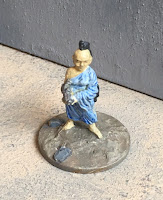 I based her on the evil Servalan from Blakes 7 and gave her a squad of fairly unimpressive soldiers (who happened to be named after prominent military historians but that's a side issue) as well as a fairly chunky combat robot. Apart from the robot, all of this squad were figures from the original 1970s Gamma World Adventurers box by Grenadier Miniatures.

Richard ran the crew of the Free Trader Gilgamesh; a squad made up of a mix of various miniatures. It was this group that had the task of escaping via the Stargate. They also had a military robot... 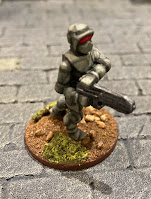 On the Starport side, Andy quickly managed to get Eloise (his machine-gun-armed-military-veteran pilot) into an overwatch position on top of the Starport Security building. Having an army-surplus jump pack helped with this! 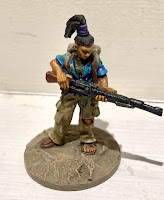 Meanwhile the rest of the crew set off with their grav-sleds of dodgy merchandise. 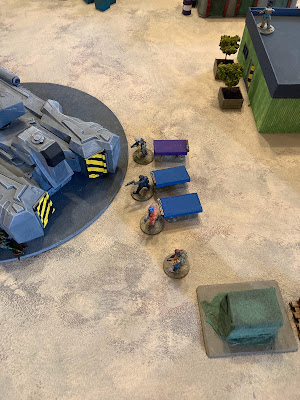 The first shot of the game saw Sergeant Gnaar, the Okh leader, caught in a hail of machine-gun bullets and put out-of-action. This was a taste of things to come. Gus was unfortunate to lose another officer to the streetgang's firepower and was always chasing the game after that.
I saw less of the wasteland game as Richard was reasonably familiar with the rules so less guidance was needed from me. Above we see Troopers Glantz and Erickson taking cover behind a rock spire.
Phil/Commisar Lukan was successful in this game. In Richard's words, "Well and truly stuffed me with some excellent dice!"
The back-and-forth nature of the game was appreciated by the players and we plan to have another go in March. Since the game, Phil has bought a copy of the rules and he and Richard are both working on building squads based on figures they own. Rogue Stars is great that way - you can use pretty much any figures you have to hand.
For these first games I had set up the forces such that we avoided using some of the rules - tactical doctrines, grenades, and psionic were all off the table (see what I did there?)  I suspect for the next game I'm going to come under pressure to use the full rules.
Posted by Counterpane at 10:38 AM 2 comments: