On Mondays the market just round the corner from my work has several stalls selling toys and stuff as well as second hand books.  It's been a great source of wargames purchases over the years but this week was particularly good.  Three Altaya tanks at £3.50 each!

The M60A3 is in Egyptian Army colours.  It'll get repainted to join the NATO forces in Andreivia. 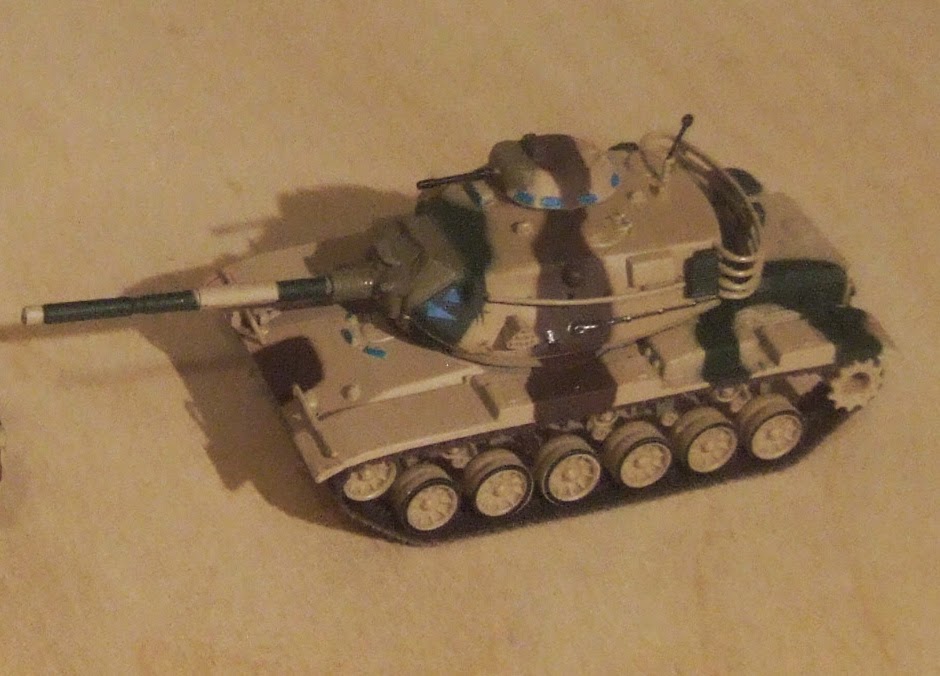 The Panther is described as an Ausf A.  I haven't checked it against my Panther book yet.  I may leave it in its current paint scheme. 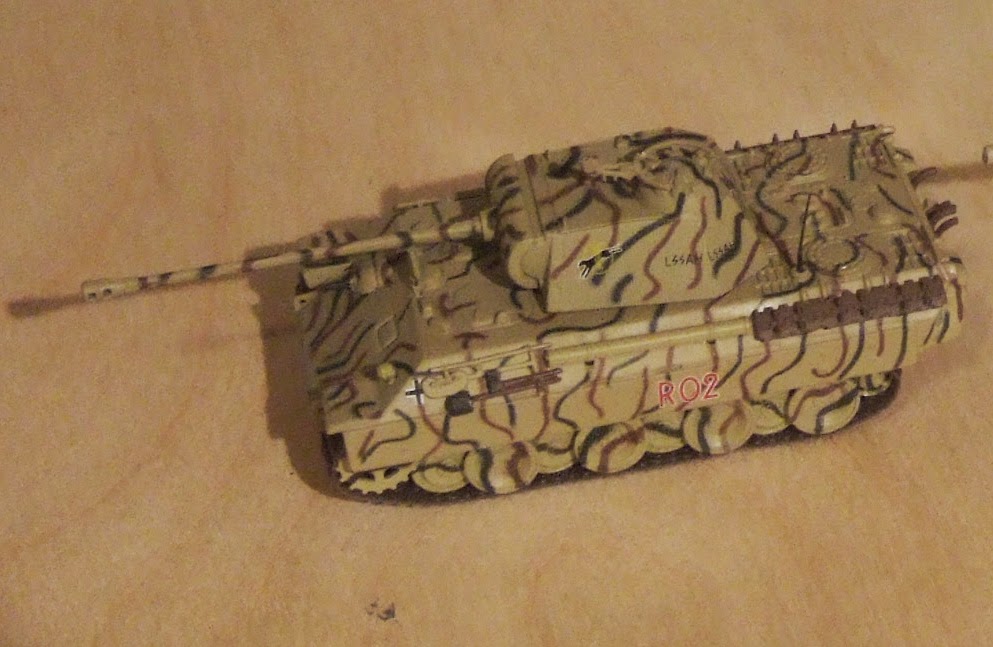 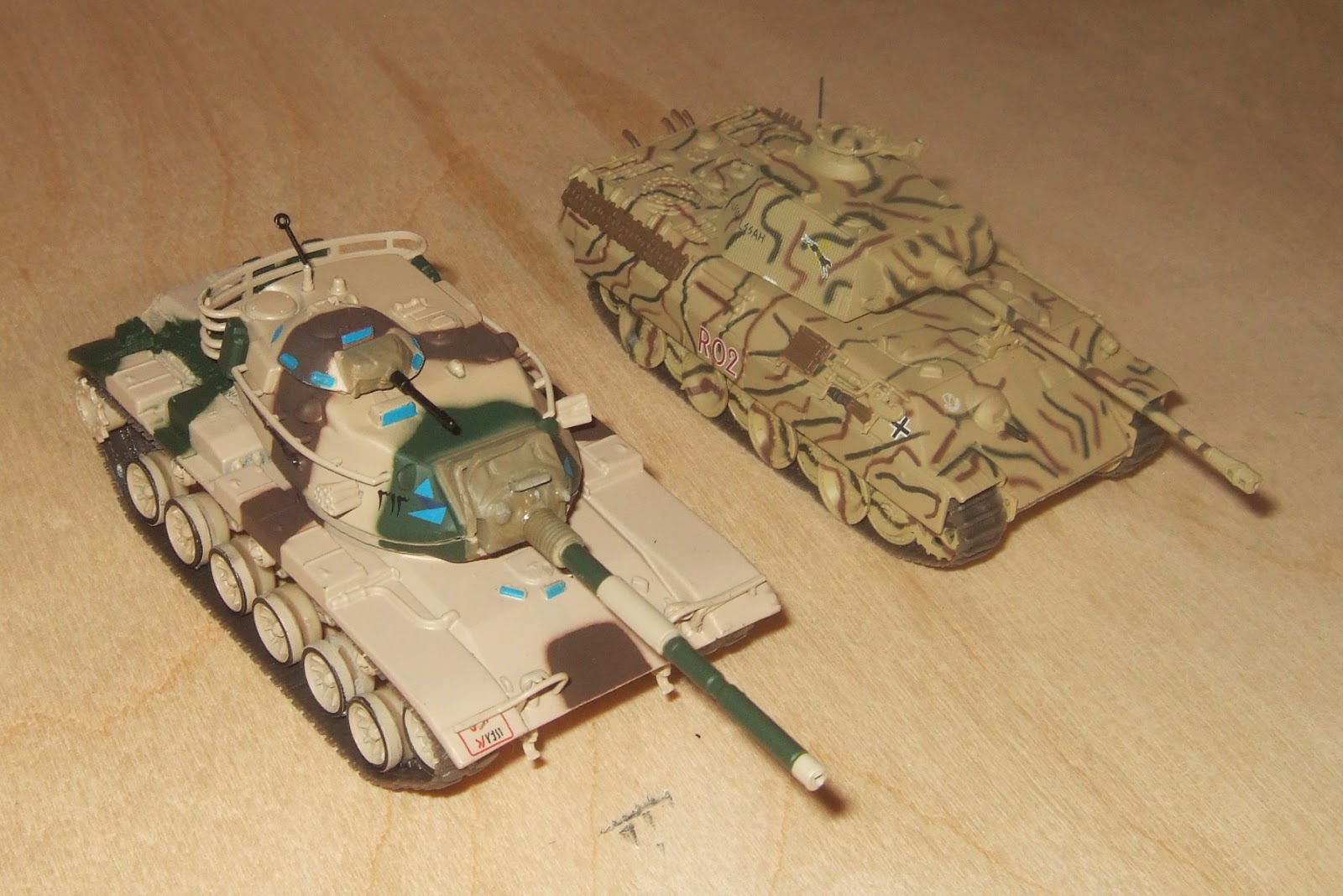 And finally, I picked up a C1 Ariete for Richard Phillips who is now doomed to build Italians for the next Andreivia game. 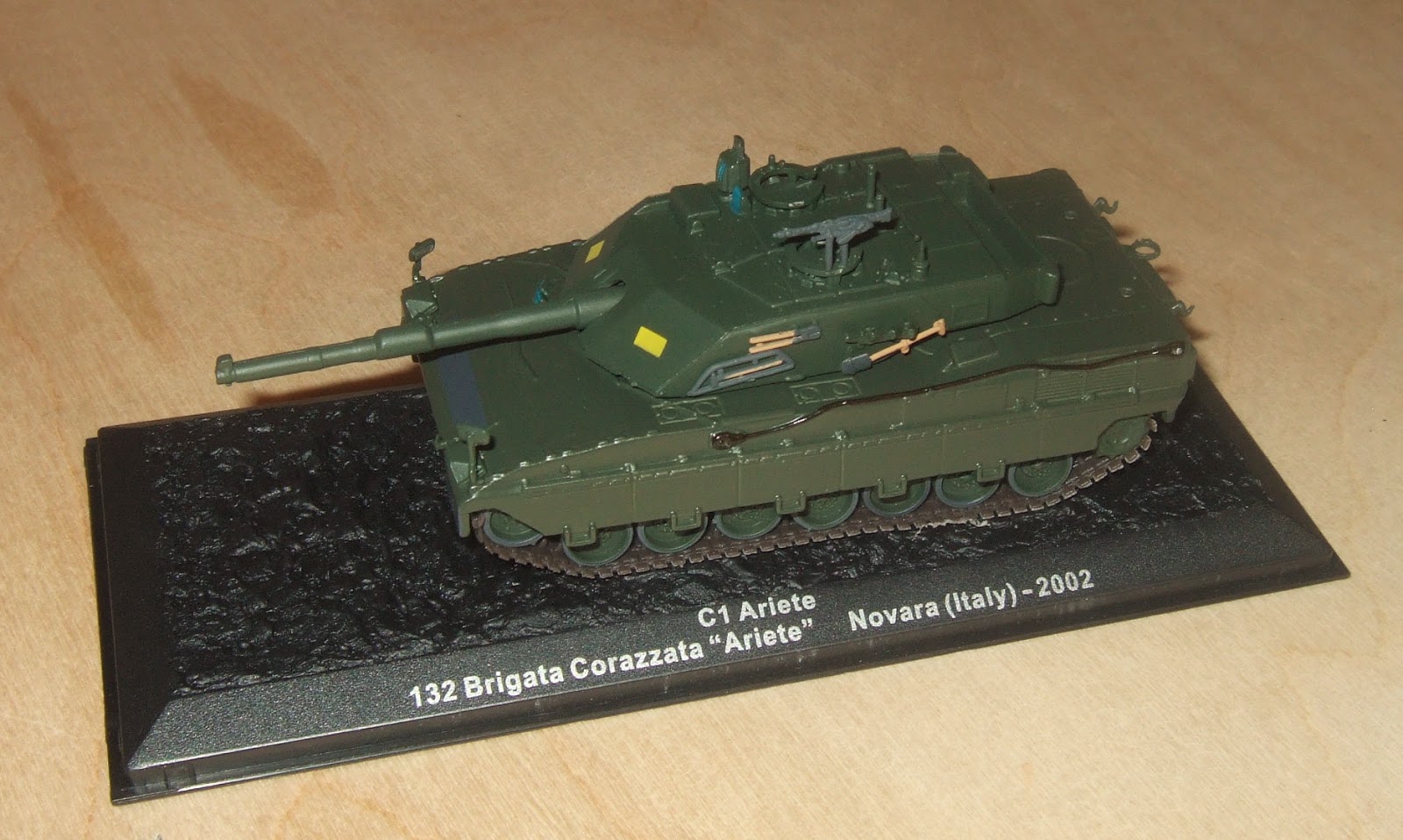 The Altaya models aren't as well-made and beautifully detailed as the Dragon ready-mades but at these prices I wasn't going to look a gift Panzer in the mantlet.

I played a solo game of Pulp Alley the other evening just to try out one of my new Leagues.

I used the "Dangerous Delivery" scenario to represent a party of explorers trying to escape from a partially ruined Atlantean city with my Atlantean Guards league trying to stop them.

The guards consist of Polemarchos (leader) and ten (follower) guardsmen, five with tridents and five with flameguns.


Up against them was a hastily assembled exploring party theoretically under the leadership of Professor Protherroe but in fact led by the American explorer Rock O'Connor.

Juan, Jose and Javier were all followers.  Sarah was a sidekick and the Prof and Don Luis were allies.

The terrain was intended to cover the edge of the ruined city and the start of the jungle beyond.  The Protheroe party were to enter bottom right and leave top left: 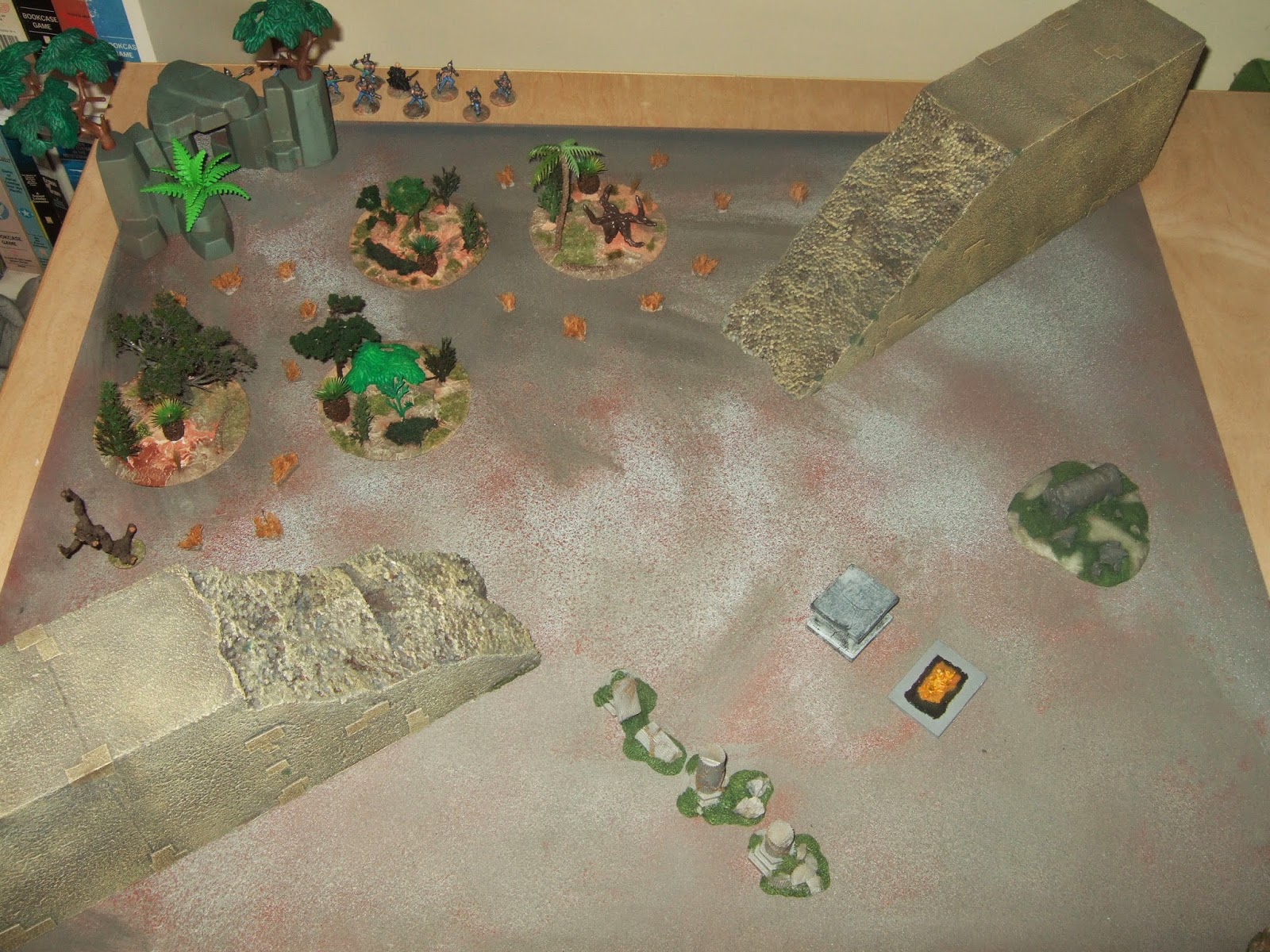 O'Connor started with control of the Major Plot Point (the Atlantean Princess) and Javier was leading the second (a mule-load of treasure).


Turn Two saw the exchange of fire at long range with Followers going down on both sides.


Turn Four focussed on a confused melee in the centre of the board.

Turns five through seven (Rock used a reward card to extend the scenario) saw Don Luis recover again but the Prof go down and out having failed too many Health checks.  Rock, the Princess and the treasure disappeared through the rock arch with Sarah just behind them.  Rock will have some explaining to do and will doubtless be persuaded to go back and rescue the Prof.


Overall I was pleased with how the scenario went but it brought home how relatively difficult it is to play Pulp Alley solo.  You have to keep track of Fortune Cards and special abilities across multiple characters on both sides and that's not always easy to do.
Posted by Counterpane at 12:27 PM No comments:

The family decamped to Wirral this Easter to stay with my Mum for a couple of days.  This gave me to chance to visit a couple of new shops in Merseyside.  Both were very much fantasy-focussed so I didn't spend as much as if they'd been selling historical models but I did make a couple of buys: 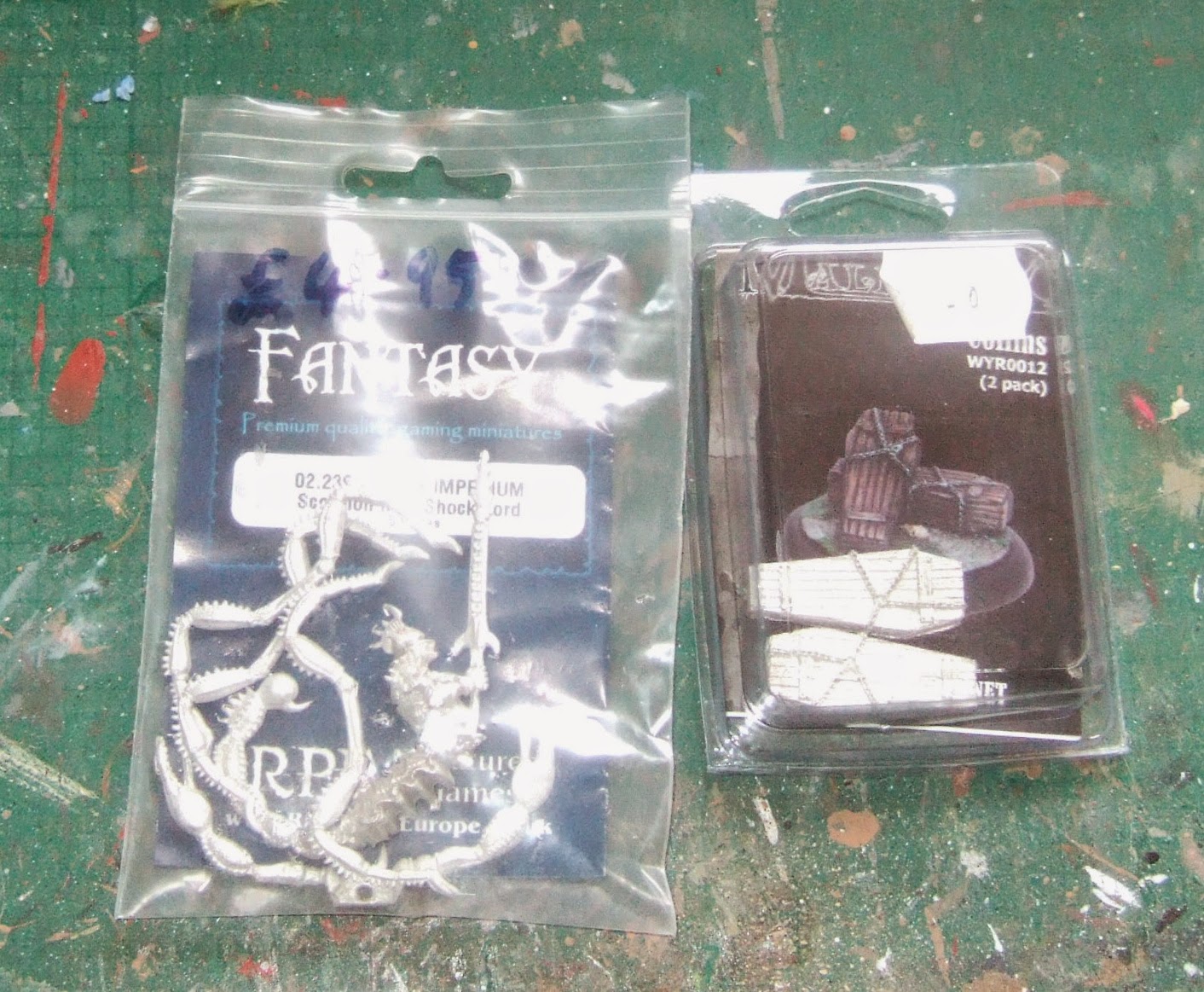 The Scythe and Teacup is a gamer cafe just outside the city centre of Liverpool.  Tucked away behind an anonymous doorway on a backstreet, it's part greasy spoon cafe, part shop, part games club.  There was an interesting range of Euro games and card games, some miniatures (the usual Malifaux and Dystopian Wars stuff plus some more unusual figures) and a tiny amount of Ral Partha resin terrain.  I was tempted by the latter as I'm always on the look-out for items to use in Song of Blades and Heroes or Pulp Alley games but on this occasion nothing caught my eye that I didn't already own.

I did pick up a Ral Partha scorpion-man though.  He joins the lead-pile and and will eventually see action in Gloranthan SOBH games.

On Saturday afternoon I combined a trip to the local tip with some garden waste with a visit to the Miniaturium in Wallasey.   This is an interesting little shop, only open for a few hours on a Saturday, that sells Malifaux, Bushido and Dystopian Legions miniatures whist doubling as a workshop and outlet for the owner's large scale sculptures.  Sadly none of those games are my style - I prefer my wargaming a bit less dystopian - but I did pick up a couple of chained coffins from Malifaux manufacturer Wyrd Games.  They do nicely as scenery or plot points in SOBH or Pulp Alley.
Posted by Counterpane at 2:27 AM No comments:

Just some pics of game:

Cast in order of appearance

The Crisis Point team are powered by beer and pies from
The Royal Hotel, Dungworth

Game played entirely on location at Dungworth Green Hall, Sheffield, S6 . The producers wish to thank the staff of the Bradfield Dungworth School and the Dungworth Village Hall Committee for their assistance.

Copyright in The Battle for Tcherbevan is protected by the laws of the Republic of Andreivia. No reproduction without express permission of the Minister of Culture, Culture Ministry, Ministry of Culture Building, Culture Ministry Boulevard, Tcherbevan, Andreivia. The characters and events in this game are fictitious. Any resemblance between them and real events or people is entirely deliberate.

Posted by Counterpane at 2:42 AM 4 comments:

Battle for Tcherbevan - Day One

Despite being a couple of players down on the ideal number we managed to get in a good game today. I reckon we got through six or seven game turns despite spending an hour setting up and another having lunch at the pub.  By the end, everyone had pretty much got the hang of the rules and we were bowling along nicely.

The table, just one really big one this time, looked quite spectacular with Richard's municipal buildings being particularly fine.

The late cancellations left us with a larger table than we really needed and tomorrow I intend to close down the sector north of the river leaving the Russians in charge of the airport.

As it was, Jamie did a good job of patrolling the airport and managed to find so partially burned documents (intelligence coup) and the pedestrian tunnel under the runway whilst only taking one man wounded.  So a win to the Russians.

Richard and George managed to get Bubi Three, the Andreivian entry to this year's Eurovision Song Contest, out of town after agreeing a non-aggression pact with the Russians.  So a win to the Government.

Gordon, as the Mujaheddin, managed to take a building from the Government and didn't lose any men at all.  So a win to the Islamists too!

Andreivian Armenian Rob lost some buildings and gained some others but lost a fair number of men in the process.  I'm having difficulty convincing myself that we can call him a winner at this point.

Likewise Russ who, as the Turks did OK but didn't manage to get the Mujaheddin to do all his fighting for him.

I report some more and add to the photos tomorrow.

These things never go according to plan and last night I learned that we've lost one of our players for at least half of the first day due to a medical emergency.  So I was up at 4:45 this morning rejigging the scenario.  There are still spaces if anyone in the Sheffield area fancies playing some Andreivian Turk militia!

The early start did allow me to repair a damaged mast on the Andreivian Freighter (the Mari-Elenn Karta out of Tcherbevan) seen here in her recently-cobbled-together glory.

Posted by Counterpane at 11:36 PM No comments:

I'm off to Barnsley on business this morning and then it's off to the village hall to collect the tables for Crisis Point III.

Here's a random pic from a previous Crisis Point: 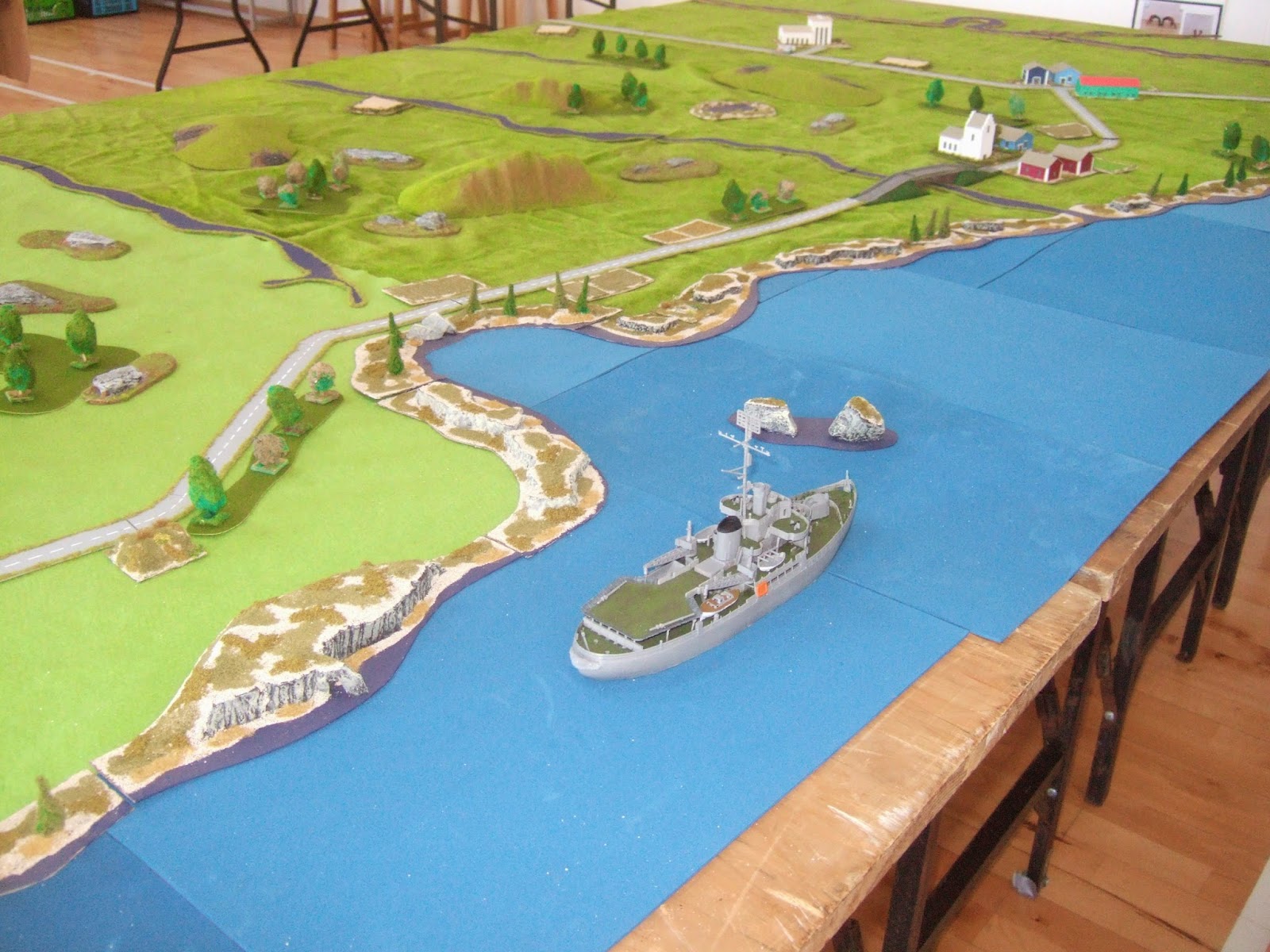 I took an afternoon off work yesterday to get myself sorted for the weekend's Crisis Point game.  The spare bedroom is now somewhat full of terrain and box-files full of vehicles : 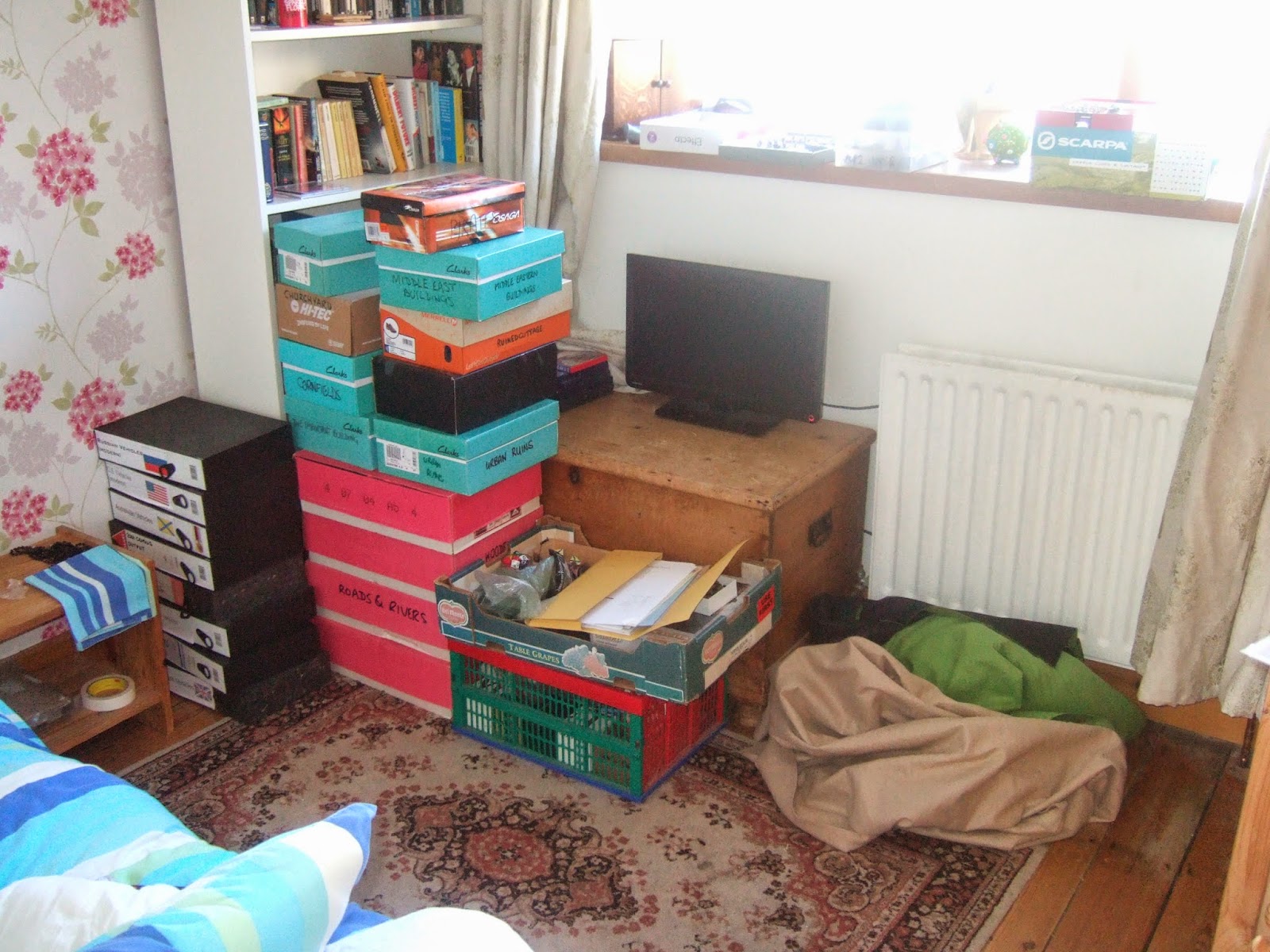 and of boxes of figures:

Posted by Counterpane at 11:34 PM No comments:

A Week to Go

With just a week to go before Crisis Point III, I took advantage of part of the family being away to set up a practice game of Arc of Fire on the kitchen table.  I decided to set up an assault on a militia-held farm complex by some Andreivian Government paratroopers. 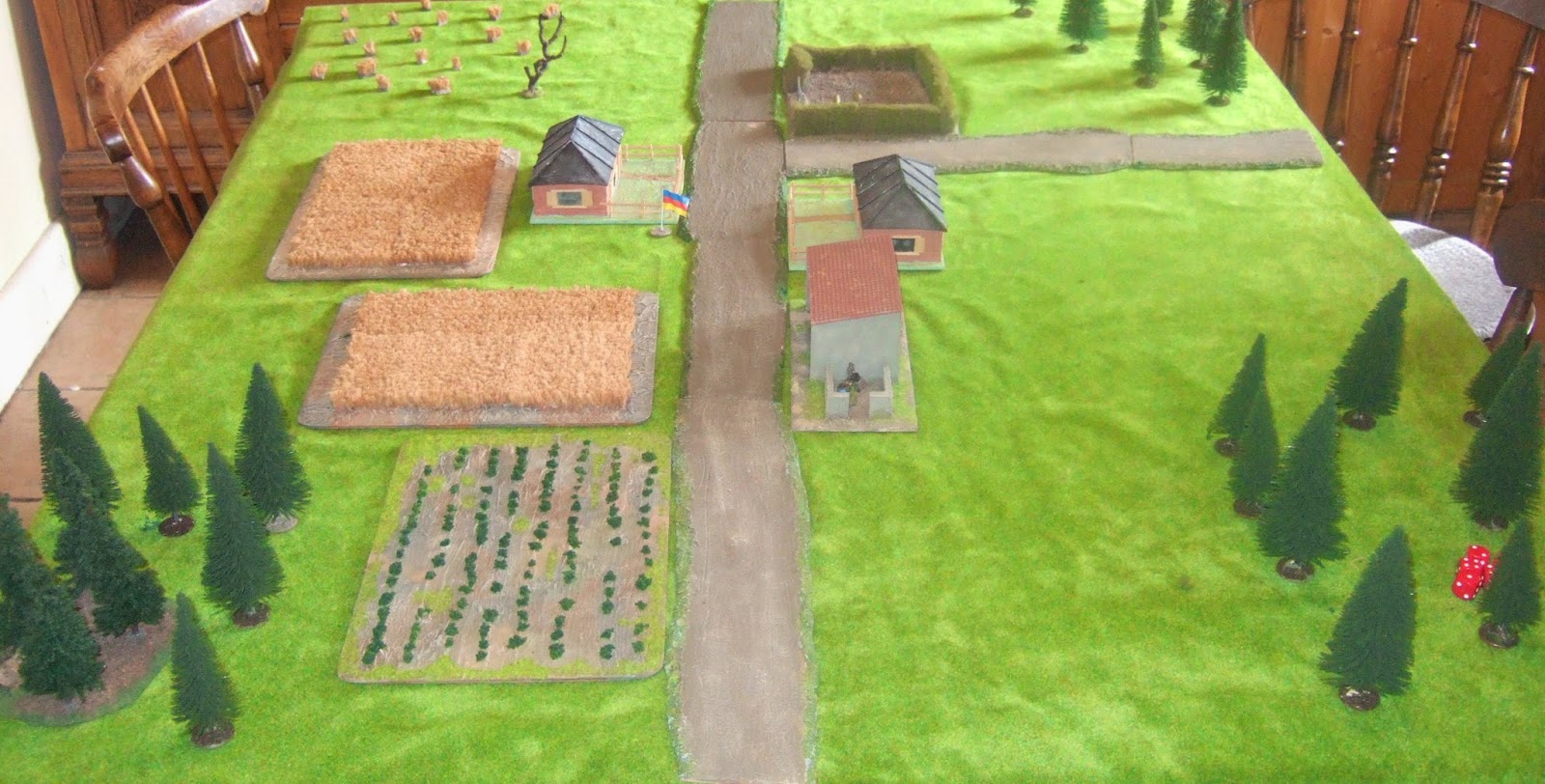 I played the assault through solo at first and it was useful to learn that, set up as they were with three five-man squads the para platoon is too vulnerable to losses, despite having Morale 5.  I'll have to reorganise them into fewer, larger squads.

Later on, Mark Preston came round to try out the rules - his first ever go at wargaming.  He had a go at throwing some paras at the barn and quickly learned that SMGs in the open are no match for assault rifles in cover!


Posted by Counterpane at 10:23 AM No comments: 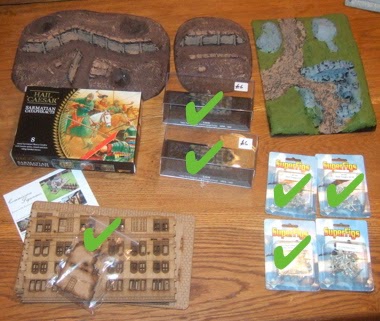 Latest finished is the laser-cut Koenigsstrasse building from Commission Figurines.  I've not painted a lot of the details - I just wanted to give the general idea of a burned out shell. 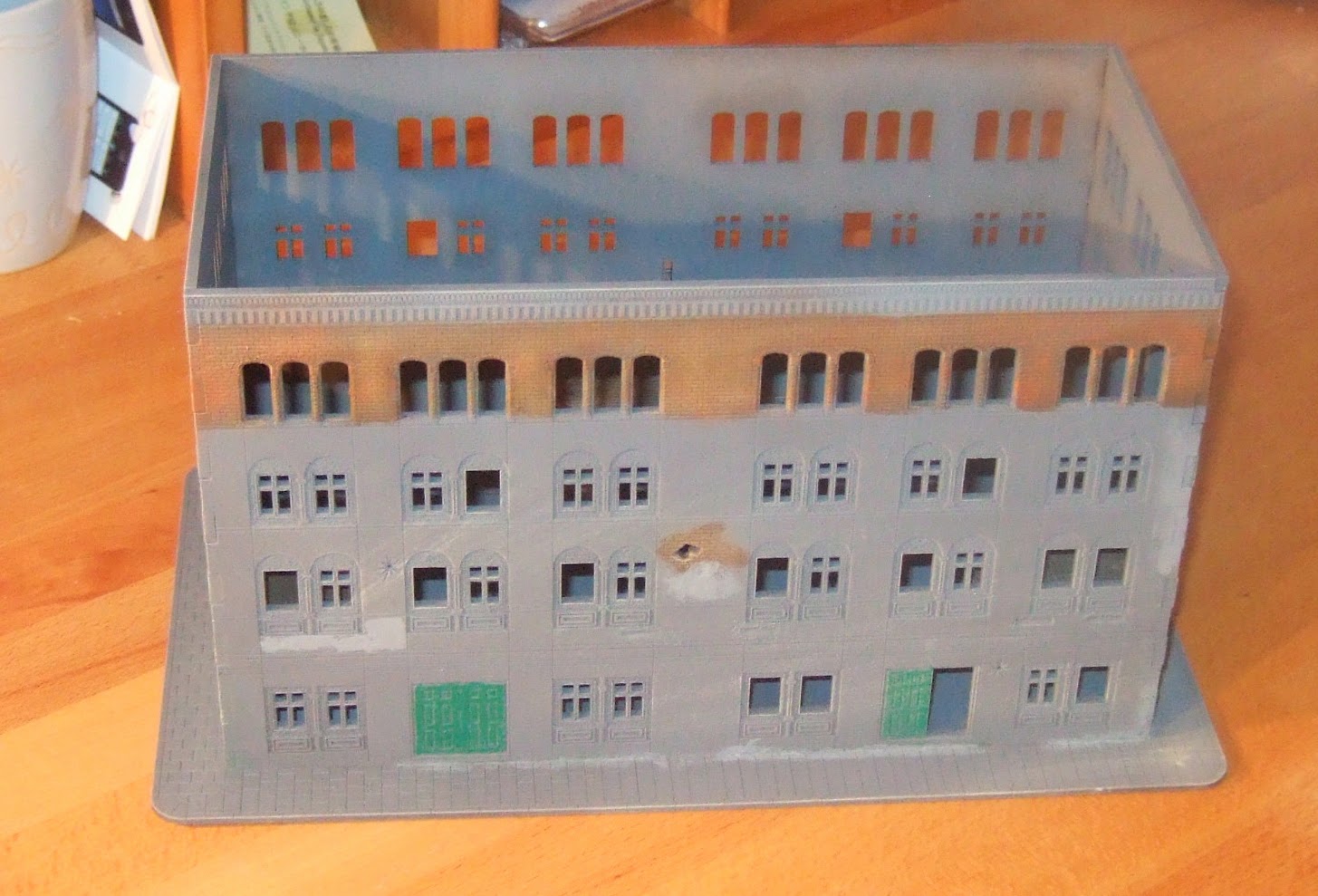 Then there's the Sharkmen, who are now deemed to be Atlanteans for my Pulp Alley games.  I've now varnished them and provided them with a leader. 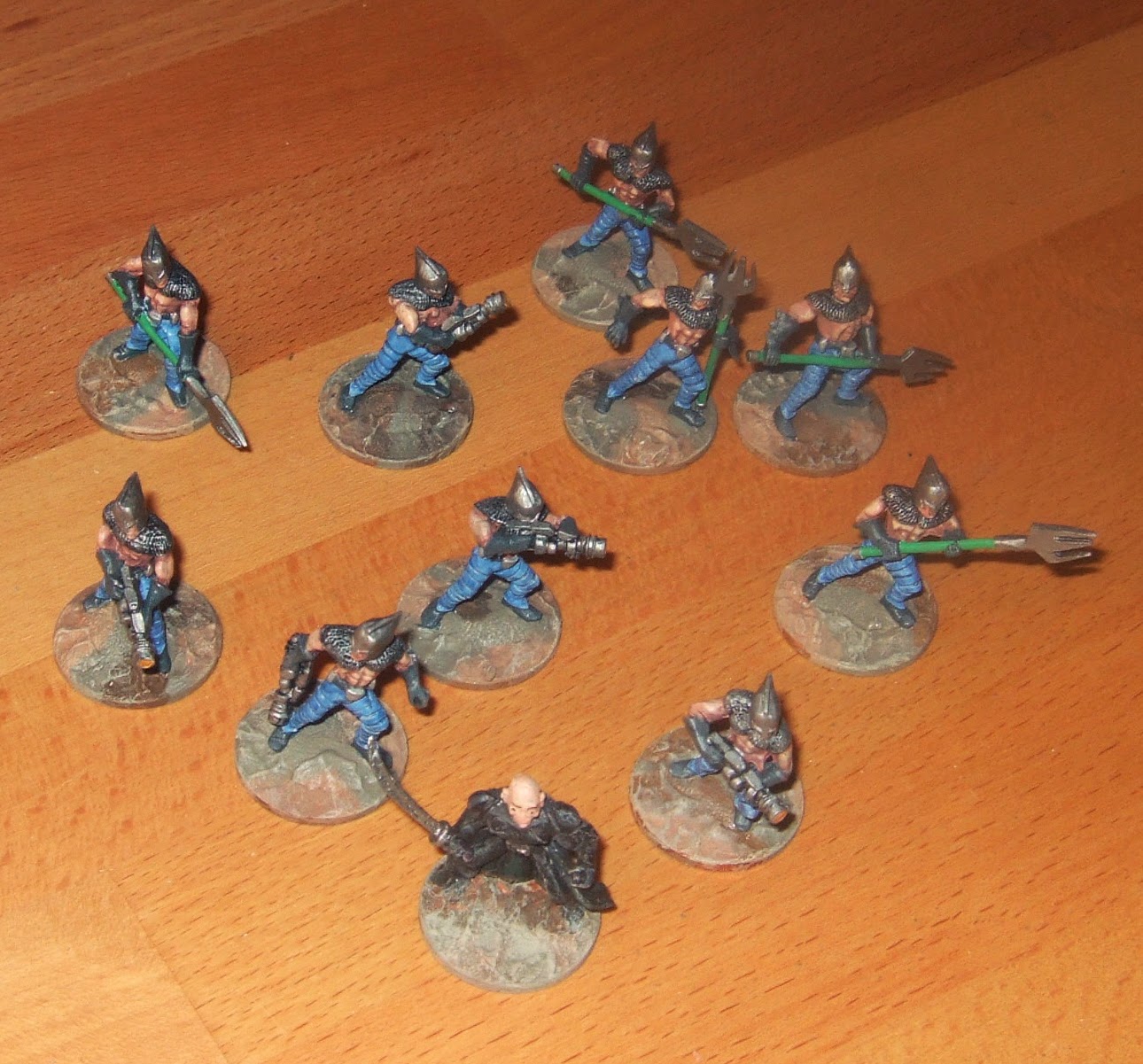 And then there are the Host Alpha aliens.  I can't claim responsibility for these as they are Millie's paint job. 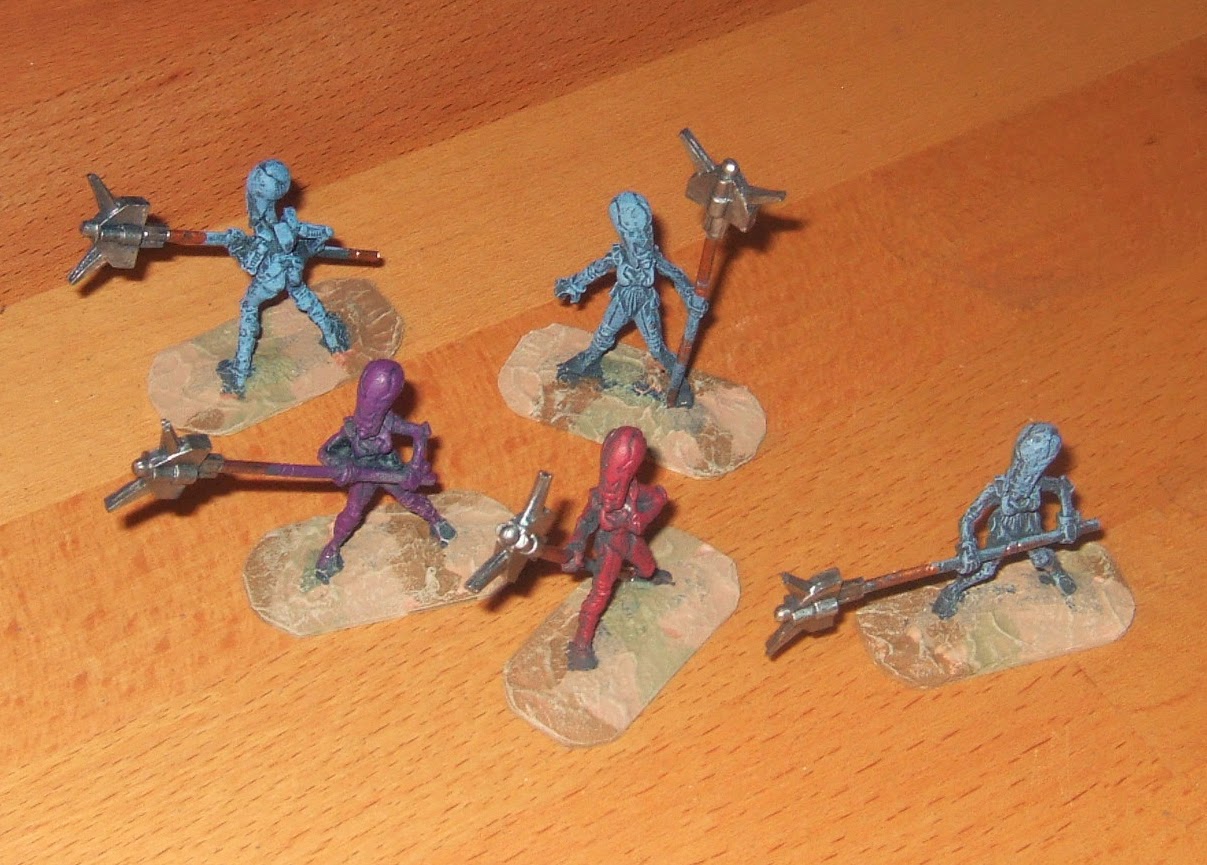 And finally the T-34s.  These only needed taking out of their display cases but one of them's had a green repaint.

So three months after that shopping trip I have only eight cataphracts and five aliens left to paint!  Oh and some vacc formed scenery I might tart up a bit.
Posted by Counterpane at 12:27 PM No comments: