Inspired by Dave Phipps's Pulp Alley videos over on Youtube I've had a go at making some vaguely Pulp-y plot points and terrain pieces recently.  For one reason or another they've cost me nothing...

At Gauntlet last year I picked up a bag of bits of white metal on the bring-and-buy.  "Oh you can have them" said the owner.  They proved to include a number of vaguely useful bits.

First up is this recently dug grave: 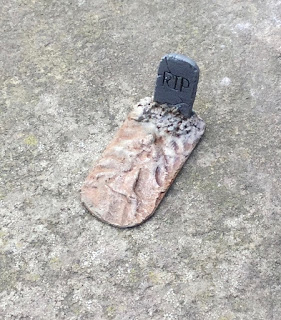 Just the thing for many a Buffy the Vampire Slayer scenario!

Next in the bag of disregarded white metal was this: 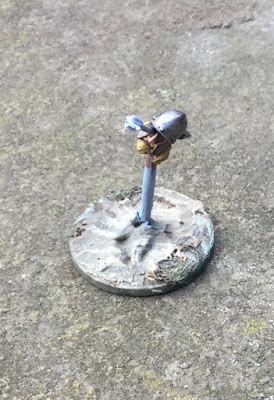 Not sure when I'm going to need a dark-ages-head-impaled-on-a-stick-with-an-arrow-through-its-eye but you never know....

And then we have this generic fantasy shield.  It just cried out to be painted as an ancient relic, always good as a plot point... 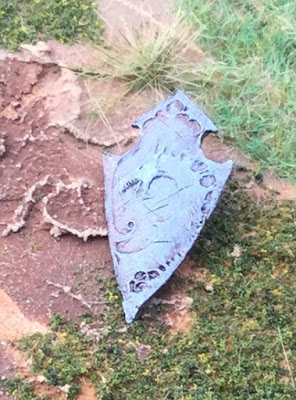 The verdigris-bronze finish on the shield also came in handy for a Salute give-away figure from Warlord Games.  I've never been to Salute but my mate Simon Miller has and very kind me sent this one last Christmas: 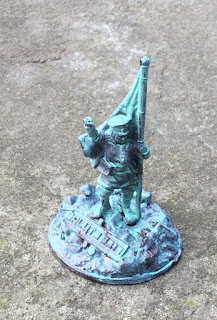 I see this as absolutely ideal for use in some Andreivian town square one day soon.

Finally we have this piece of vaguely pulp-ish industrial machinery: 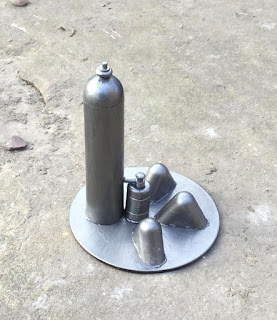 Made from assorted pieces of plastic pulled out of the "bits box", it took about five minutes to stick together using my hot glue gun and about as long again to paint in a gunmetal colour.

Tom D came over on Saturday and I ran a small Arc of Fire scenario to introduce him to the rules in preparation for the Crisis Point game in April.

The scenario was a simple one.  It's 1918 and a small Turkish force (four-man HQ, 15-man rifle section, LMG team, and five-man "bomber" team) have to capture an Andreivian village.  The village is held by a small Andreivian army team and, unbeknown to the Turks, a temporarily immobilised Renault FT light tank. 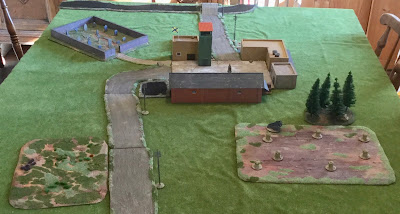 The above pic shows the table from the southern (Turkish) edge. A brick-built warehouse dominates this side of the village but it has only two windows on the south side so it's not readily defensible.  Tom elected to advance to the right of the road, across the recently harvested wheat field and either side of the small copse of trees. 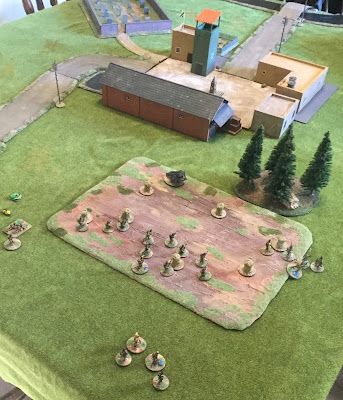 Pretty soon the Turks came under ineffective rifle fire from the back of the warehouse.  The Turks returned fire and were sure they'd achieved some solid hits.  In fact the first fusillade wounded the Andreivian forces commander, effectively ending his involvement in the fight.  The second round of firing from the Turks killed his second in command outright and the Andreivian HQ unit ceased to exist as a fighting unit!

As the Turks closed in on the village I knew that I'd have to move the only remaining Andreivian infantry unit (a six-man rifle section) from the graveyard to the central square if I was to buy time for the tank driver to repair the engine. 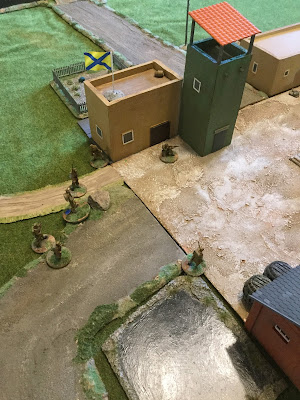 The tank driver was reasonably lucky with his TAC rolls.  As the Turks approached the village square they heard an internal combustion engine splutter into life (I was going to say roar into life but come on guys, this is only a Renault FT) and heard the grinding of caterpillar tracks. 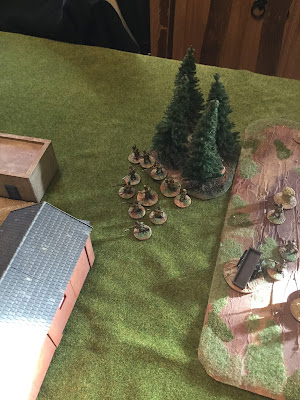 The FT managed to get off a shot from its 37mm Puteau cannon.  37mm HE is not very powerful and the commander (the FT has a two-man crew) was firing while the tank was moving.  Even with a densely packed infantry target the shot was ineffective.  It would prove to be the tank's only shot of the game! 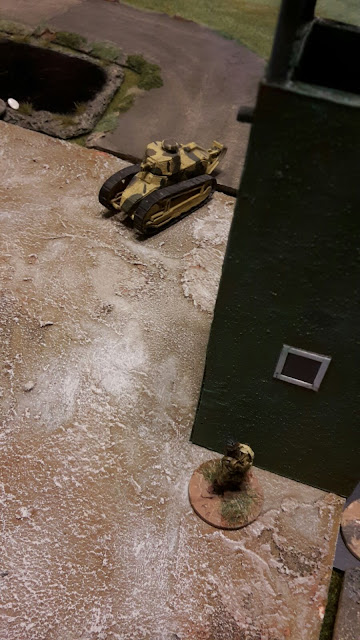 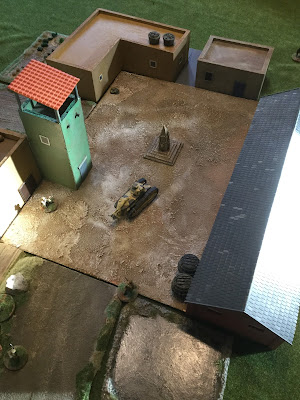 As the tank commander tried desperately to reload, a firefight developed across the village square.  The Andreivian infantry scrambled to take what cover they could but they were severely out-numbered and once the Turkish LMG came around onto their flank, their days were numbered. 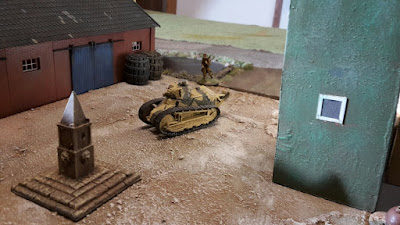 It came down to race to see if the Andreivian tank could extricate itself from this unsuitable tactical situation before the Turkish bomber team could get close enough to use their grenades against it.

In the end a single Turkish bomber launched two heroic close assaults on the tank but he was unable to prevent it wheezing and clanking its was off along the northern road towards safety. 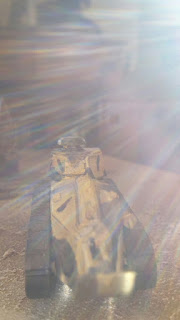 So that was Tom's first AoF game. The Turks had seized the village to a win for them.  The Andreivians had also met their aim of extracting the tank to safety but the loss of both commander and sergeant in the first few moments of the action took the shine off this achievement.

A fun game. We got done in a leisurely couple of hours and AoF again showed that new players can pick it up within a very short time.

Jamie came over at the weekend (it was my birthday) and as well as going out for a meal we managed to get in a game of Pulp Alley on Saturday evening.

It’s been a while since we played an episode in my very slow PA campaign “The Quest for Faulkner’s Balls”. Over a year in fact! I knocked up a simple game using my new graveyard terrain module and the standard “Trail of Clues” scenario from the rule book.

Jamie played the Friends of the Reverend Featherstonehaugh and I looked after those vicious London criminals The Muswell Hill mob.

I wanted to have a go at using the vehicle rules from Gadgets, Guns and Vehicles. I gave the Rev’s Friends a Rolls Royce.  There was also a chap from the GPO working on the telegraph line that runs over the moor.  His van was a possible source of vehicular mayhem. 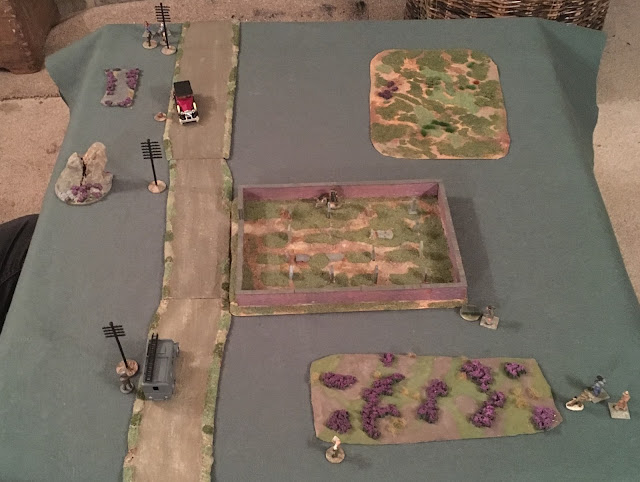 The main objective was to gain control of Captain Faulkner, the shell-shocked veteran of the trenches now often found wandering the moors with his dog Sergeant.

We each placed one minor Plot Point at the start of the game. Jamie placed a large earthenware pot beside the road and I put a wooden crate at the corner of the old graveyard.

Notter of the Muswell Hill Mob reached the crate and managed quickly to prize it open. Looking up from the contents he saw a Raven perched on the graveyard wall. “C’Mon Sergeant” it squawked!  (That was the next Plot Point that I placed).

In the meantime the earthenware pot was proving harder to understand (I played a Peril) on Jamie’s character. As a result it took him longer to go for his second Plot Point (a hand drawn map).

A gun battle then developed between Notter on the Mob's side and The Count and PC Newthwaite on the other. 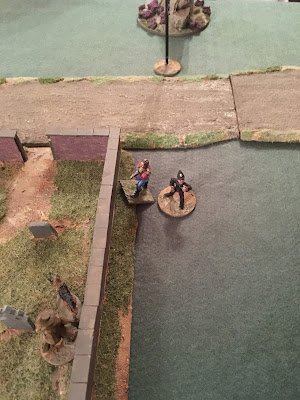 Miller, meanwhile, managed to get over the graveyard wall and persuade Faulkner of the wisdom of accompanying a man with a strategically placed automatic pistol. 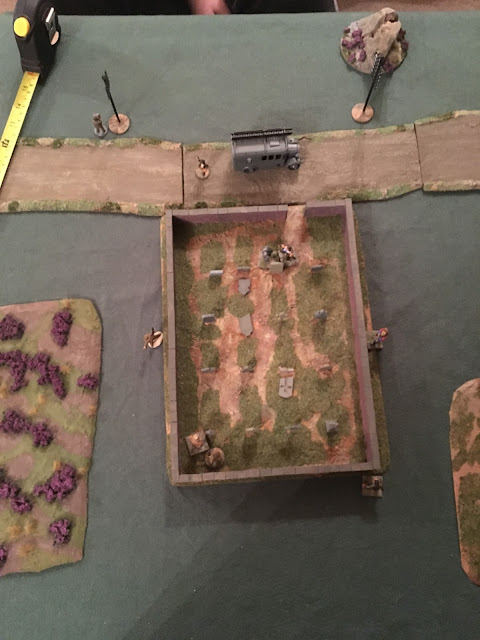 One of Jamie's reward cards allowed him to extend the game to seven turns but it wasn't enough to prevent the Muswell Hill Mob making off with Faulkner and, presumably, his ancestor's mysterious journal too!

Look out for the next episode of the Quest for Faulkner's Balls - coming to a theatre near you soon! Well, eventually anyway. 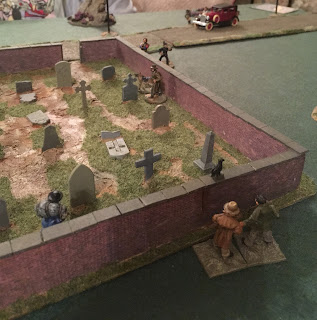 Posted by Counterpane at 2:31 PM 2 comments:

Inspired by some of terrain items I've seen decorating the tables in Dave Phipps's excellent Pulp Alley videos on Facebook, I decided to have a go at some of the bits and bobs I've had hanging around for a while.

The Renedra plastic gravestones, an old table-mat and some foamcore gave me this graveyard. 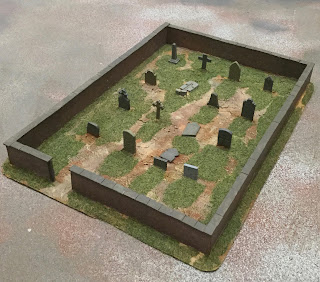 The surrounding wall is covered with brick-paper and topped with card coping stones.  The ground-cover is my usual painted-and-drybrushed tile grout covered with a new, home blended mix of fine flock and static grass.

I think the scale works well with 28mm figures... 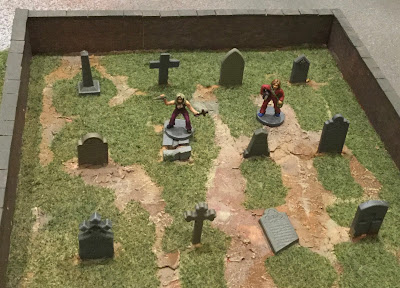 ... and looks OK with 1/72nd miniatures so this piece will probably appear in Andreivia this April. 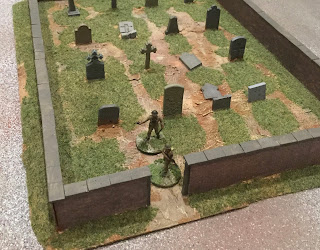 Also newly off the painting desk is this statue. 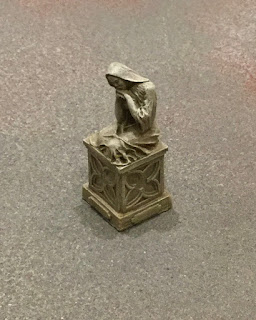 Called die Trauernde or the Weeping One, it's from German manufacturer Zitterdes and came from Wargames Emporium.  It'll one day take its place in my planned Pavis setup for Song of Blades and Heroes. 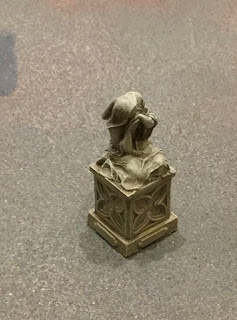 And finally we have the couple of gargoyles I bought at the Edinburgh show in the summer. 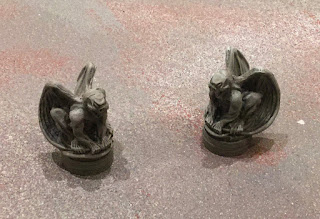 These too are destined for Pavis.  They'll just be inanimate statues, won't they?

An enjoyable trip to York today to the Vapnartak show and to catch up with various friends.  It was good to see Andy, Andy, Andy, Mark, and Mark as well as Jamie, Carl, Kenny, Will, and Annie.

I didn't take any photos this year but here's a pic of what I bought. 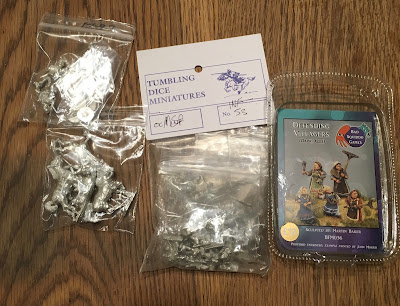 I've bought a second pack of Republican Roman cavalry from Curteys.  They'll form the cavalry ala of my second, Italian allied, legion.

The Tumbling Dice pack is a second set of WW1 Turkish infantry, which will give me a whole platoon (or a battalion in our bath-tubbed Andreivia campaign).

And finally, some very nice dark ages women defending their village with assorted improvised weapons - just the thing for our Lion Rampant Bacaudae games (or Argad if we decide to do some more).

I also bought some other stuff but I'm not allowed to tell you about that because it has to be wrapped up and given back to me on my birthday.
Posted by Counterpane at 2:08 PM 4 comments: