You may have noticed (or you may not; perhaps no one cares) that there's no write up of January's Saturday Afternoon WargameTM.  This is because there was no January Saturday Afternoon Wargame.  We were to have been thin on the ground anyway (just me, Jamie and Phil) but then Phil had transport problems and we decided to abort.  Just as well really as I was still hung-over from the previous evening's meeting of the Bradfield and District Pork Pie Appreciation Society.

However, if you're interested here's a photo* of the table set up for the abortive Sharp Practice game: 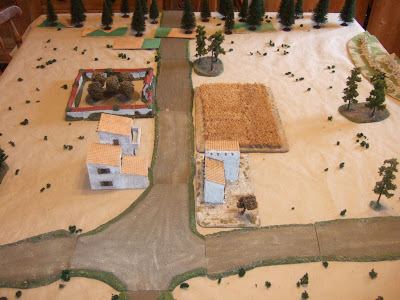 The rectangular objects along the far tree line are the cards I was planning to use as blinds to disguise hidden French units.

* Interestingly (or again, perhaps not) that was an example of the linguistic error known as a conditional biscuit as in "If you're hungry, there's a biscuit on the table" when in fact the biscuit is on the table whether you're hungry or not.
Posted by Counterpane at 3:49 AM No comments:

On the Workbench - Bills

My first batch of Perry plastic Wars of the Roses types are ready for basing. 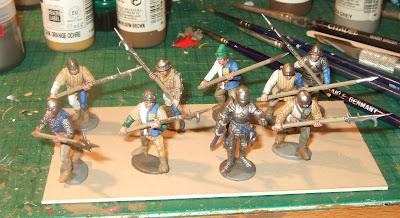 They're billmen in the livery of the Duke of Somerset.  I shall base them up shortly for Basic Impetus.  Just trying to decide whether to add a banner bearer to the unit.
Posted by Counterpane at 12:06 AM 2 comments:

2011 has been the first full year of Saturday Afternoon Wargames (™) and I’ve been happy that I’ve got far more gaming done as a result.
As always Hordes of the Things comes top in terms of most games played.  Eighteen or so I think this year.  No other game comes close in terms of volume but a few games have given me at least as much pleasure during the year. 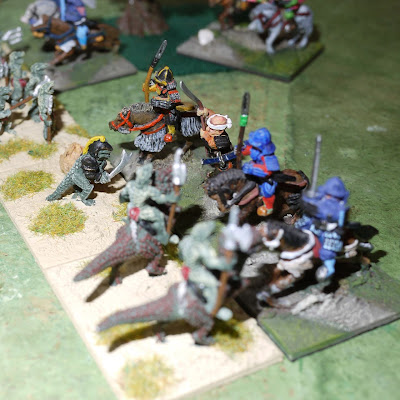 Basic Impetus has achieved a very credible four games (two I played and two I refereed) and has every prospect of being my ancient and medieval rules of choice for the foreseeable future.  I suspect there are one or two glitches around the strengths of units and a lack of proper distinction between light and heavy troops but nothing I can’t live with. 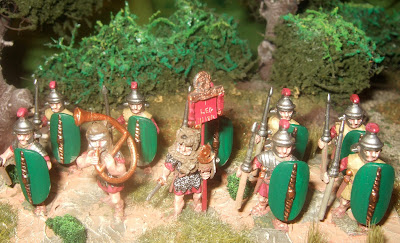 Cold War Commander had already established itself as a favourite.  Again not a perfect set of rules (I’m not entirely sold on the core combat mechanic) but these rules have got me playing with my late 20th century microtanks for the first time in years.  Next year with see at least two CWC games - one of them a BIG one. 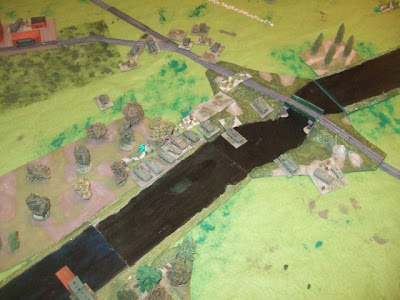 Principles of War saw a couple of outings during the year and seems to give a perfectly acceptable Franco-Prussian War experience.  I’ll probably play some more next year but might try Black Power with my 6mm figures too.
Finally, among the miniatures games, Song of Blades and Heroes has been a fun addition to the repertoire.  As a way of having a quick game with a few 25mm fantasy figures, they are a good way of getting some use out of some old miniatures. 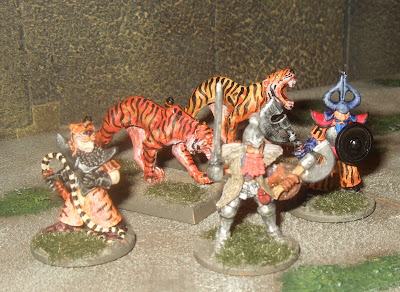 Boardgames-wise, I’ve played a couple of scenarios from my old Victory Games “Fleet series” collection. I’d be keen to do some more next year but they really need a bit longer than a Saturday afternoon allows. 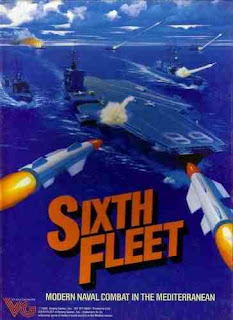 Whilst away on holiday we played a cheapo game called Get to Da Chopper.  Based upon the film Predator (I believe; I’ve never seen it) it was brief and fun.
Gus brought along a block building game over at Christmas that was fun but I can’t remember the name.
As regards painting it’s been very much at both ands of the scale range (6mm from ancients to moderns via the Great Northern War and the Franco Prussian War) and 25/28mm fantasy, medievals and ancients but very little in between.  My plan to paint up my remaining late war Germans as Kampfgruppe Odsenzods was particularly stalled.
But I did get those damned Border Reivers finished! 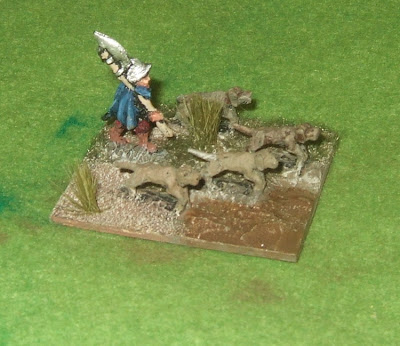 Posted by Counterpane at 2:29 PM No comments:

Email ThisBlogThis!Share to TwitterShare to FacebookShare to Pinterest
Labels: Saturday

Bit of a catch-up

I've not been here much of late because our mobile internet connection has been moving with the speed of a snail on diazepam.  However, things seem to have picked up; for one glorious half hour on Thursday evening the download rate topped 1Mbps!  I can only assume all of the other T-mobile customers in northwest Sheffield were struck down by some short-lived viral condition that prevented them putting finger to keyboard.

Anyway, I think I already mentioned that I've been out shopping and bought both Sharp Practice and Black Powder.  Both have seen very basic try-outs on top of my plan chest and both look likely to see action in one of our forthcoming Saturday Afternoon Wargames(TM).  More on both of these later.

The other major breakthrough is to have managed to persuade the school PFA to accept April's big CWC game as a PFA event. This saves us needing separate public liability insurance and makes the event financially viable.  Now to acquire the necessary green table cloths!

On the workbench of late have been some of the Perry plastic Wars of the Roses infantry I got at Christmas.  They're gradually adding a Duke of Somerset's contingent to my Basic Impetus collection.

Then there are these 20mm British Napoleonic infantry. They were, ready-painted, among a batch of plastic figures given to me by a work colleague.  I think I'll give them a dip-style varnish wash to tone them down a bit.

Finally, as I start to bulk up some existing units for a forthcoming game of Sharp Practice, a couple of Airfix conversions.  A kneeling French infantryman gets a busbied head from a British Hussar to make a Nassau grenadier.  The Frenchman's shako is then donated to a British infantryman to make a Black Brunswicker fusileer.  Sadly the Englishman's Belgic shakoed head is of no use on (and too small for) the Hussar body which will probably wait for another spare French shako. 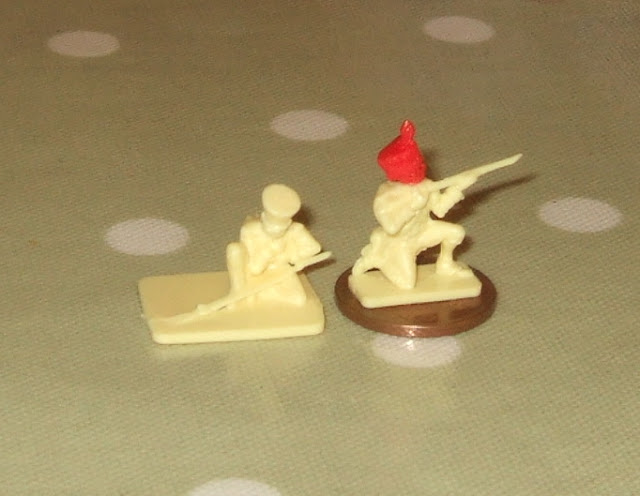 Posted by Counterpane at 6:21 AM 4 comments:

On New Year’s Eve Gus Woodward ran his long-awaited 6mm scale Battle of the Five Armies (or Battle of the Six Armies as there were enough Orcs for two Orc commands under Hordes of the Things).
The forces of Evil were commanded by Andy Sangar (the Wargs), Ron Pearce (Orcs) and Nathan Halliwell (more Orcs).  The Goodly Men of the West were Robin Woodward (The Dwarves), Richard Sangar (The Elves of Mirkwood) and Jamie Crawley (The Men of Esgaroth).  I made tea and coffee, took photographs, and gave rules advice. 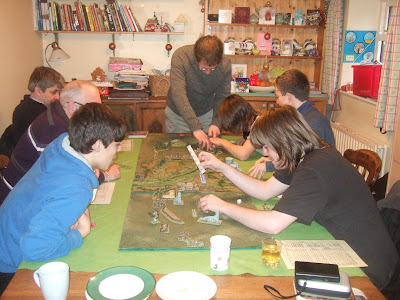 The battlefield featured the ruins of Dale (foreground), the gates of the city under the mountain (middle distance, right), and the mostly dammed River Running (middle distance). 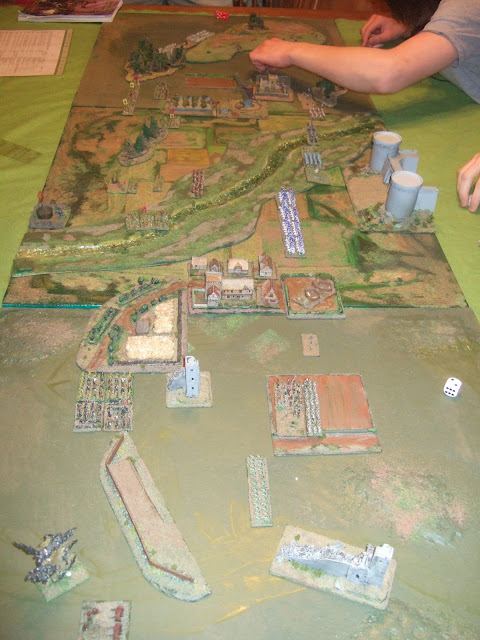 Gus’s armies are based on 15mm style bases (40mm frontage) with large number of figures on each base - about 30 in each Horde element. 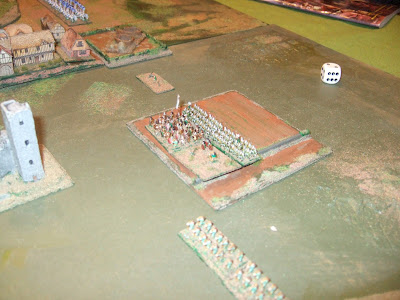 The massed Wargs were led by a nameless Goblin Hero. 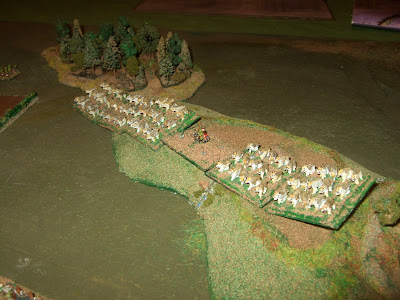 In the centre, the Orcs discovered why it’s best not to send Warband into a stand-up, good-going fight with Elven Knights. 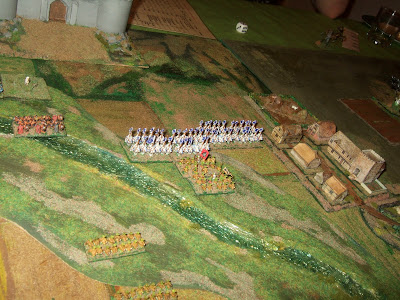 On the Orcish right the mysterious Beorn (a God under HOTT rules in this game) appeared... 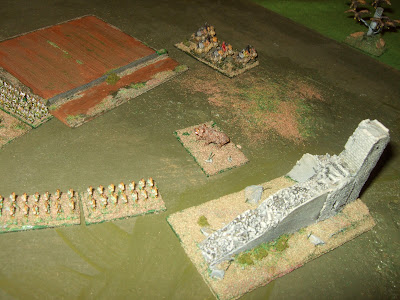 ... and then he rolled a 1 and left, presumably remembering that he had some honey to eat back at home.  Still, Jamie still had another God (the Eagles) to call upon.  They surely would be more effective.
On the Orcish left a massively bloody fight developed between Dwarves and Wargs.  The Goblin Hero leading the Wargs killed Thorin Oakenshield and then fought Dain of the Iron Hills (the Dwarven Hero General).  The result was a tie on an odd number leading to both Heroes dying in the combat! 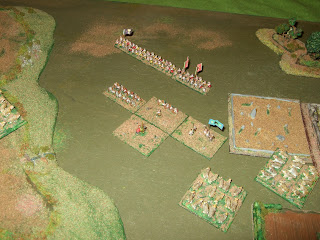 The loss of Dain pushed the Dwarves over 50% casualties leaving them as a Demoralised Command.  The loss of their own General could have demoralised the Wargs but Andy threw a six on their next PIP roll so the wolves fought on.
The battle then hung on whether the forces of Evil cold seize the treasure locked up under the Lonely Mountain.  Andy managed to get a lone unit of Wargs into contact with the goodly stronghold but they lost the contact and were then killed by Elven Knights.  Nathan nearly got there with two units of Goblin wolf-riders.  One unit was destroyed by Gandalf’s magic (a timely 6:1) and the other was unsuccessful in its single attack on the walls.


Oh, and the Eagles:  they arrived and then Jamie immediately rolled a one and they decided they weren't needed.  So quickly were they gone in fact that I didn't get a photograph.
Finally, Grogg, the Orcish commander-in-chief, was fought off and killed by Gandalf working in tandem with some Elvish blades.  His death signalled the end of the Battle of the Five or Six Armies. 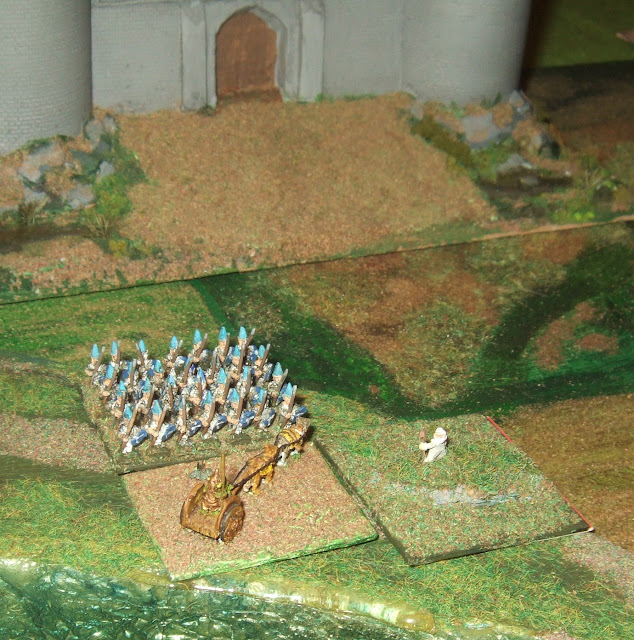 Posted by Counterpane at 10:09 AM No comments: