I had to break off in the middle of posting Day Two pictures to collect number two son from university.  Now a return to our previous programming...

On day one Ian had managed to drive off Mark and Russ's MiG27 air strike with his anti-aircraft defences.  On day two the tables were turned.  Ian's Andreivian Air Force L39 tried to bomb the Russian airborne troops on the airport perimeter.  It was targeted by two SA-7s cunningly positioned by Mark.  One of them rolled a 10 and... 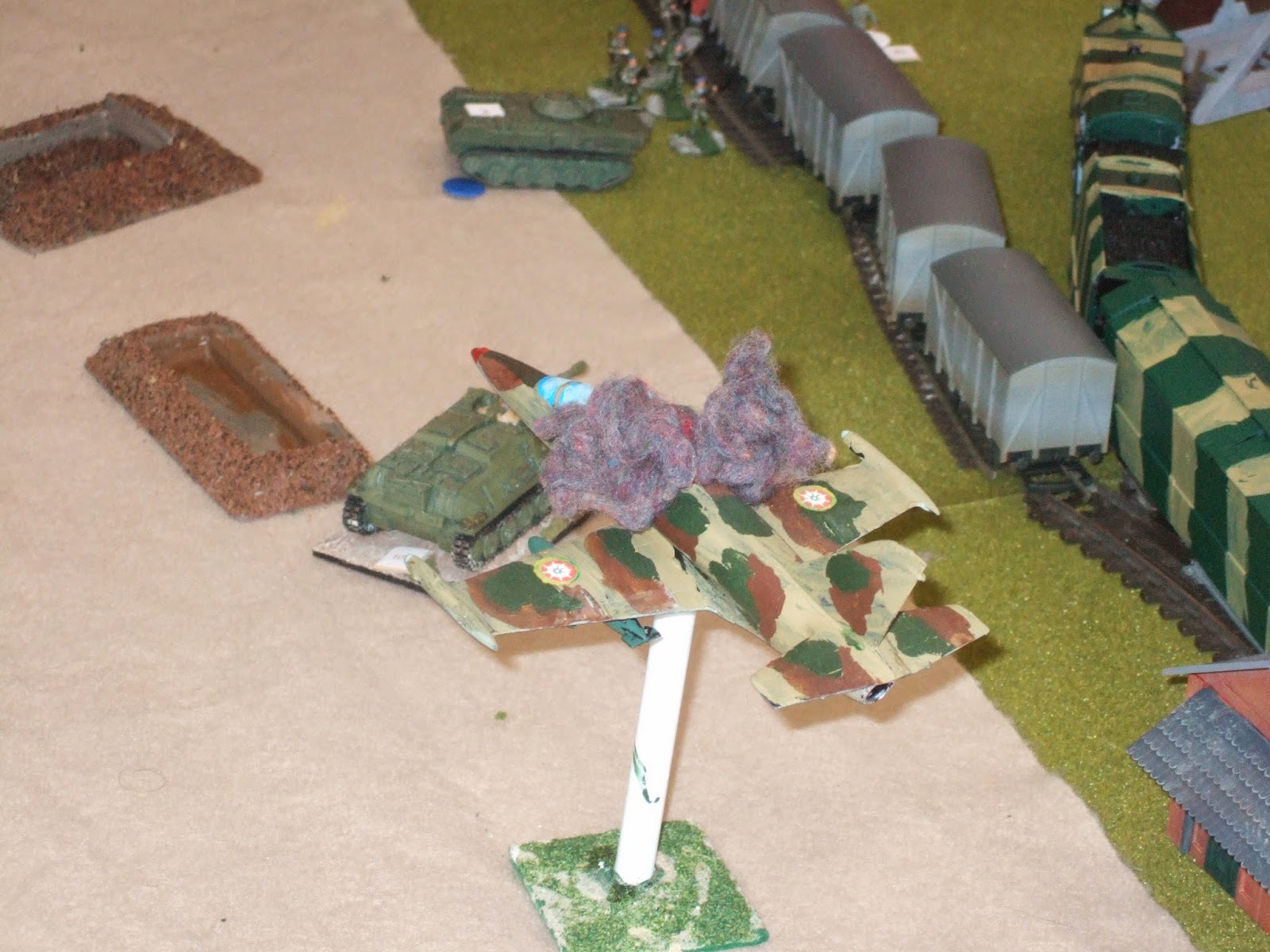 
Meanwhile at the other end of Tcherbevan, Armenian commander Rob became the victim of his own indiscretion.  On Sunday morning I'd placed a civilian figure next to Rob and said quietly, pointing to a name on a briefing sheet, "That's him".

"Oh, Serj Benkian?", Rob replied in a stentorian bellow heard halfway to Oldham.  As a result, other eyes were cast about looking for the arrival on table of the Andreivian Armenian political leader.

Richard P and Jamie C were tasked with flying an airmobile mission on Sunday but when they launched, Richard decided to divert en route to complete an improvised snatch mission.  In a fine example of inter-allied co-operation, his RAF Chinook HC3 was carrying American troops.  Rather a lot of American troops.


Before you could say "Diplomatic immunity", Serj was surrounded, his bodyguards were disarmed and he was bundled into the back of the Chinook to be spirited out of Tcherbevan.  As a result the Armenians missed out on what would have been a healthy morale bonus for getting him into the Armenian Quarter.

And in the final action of the day Jamie launched an airstrike by a Jaguar... 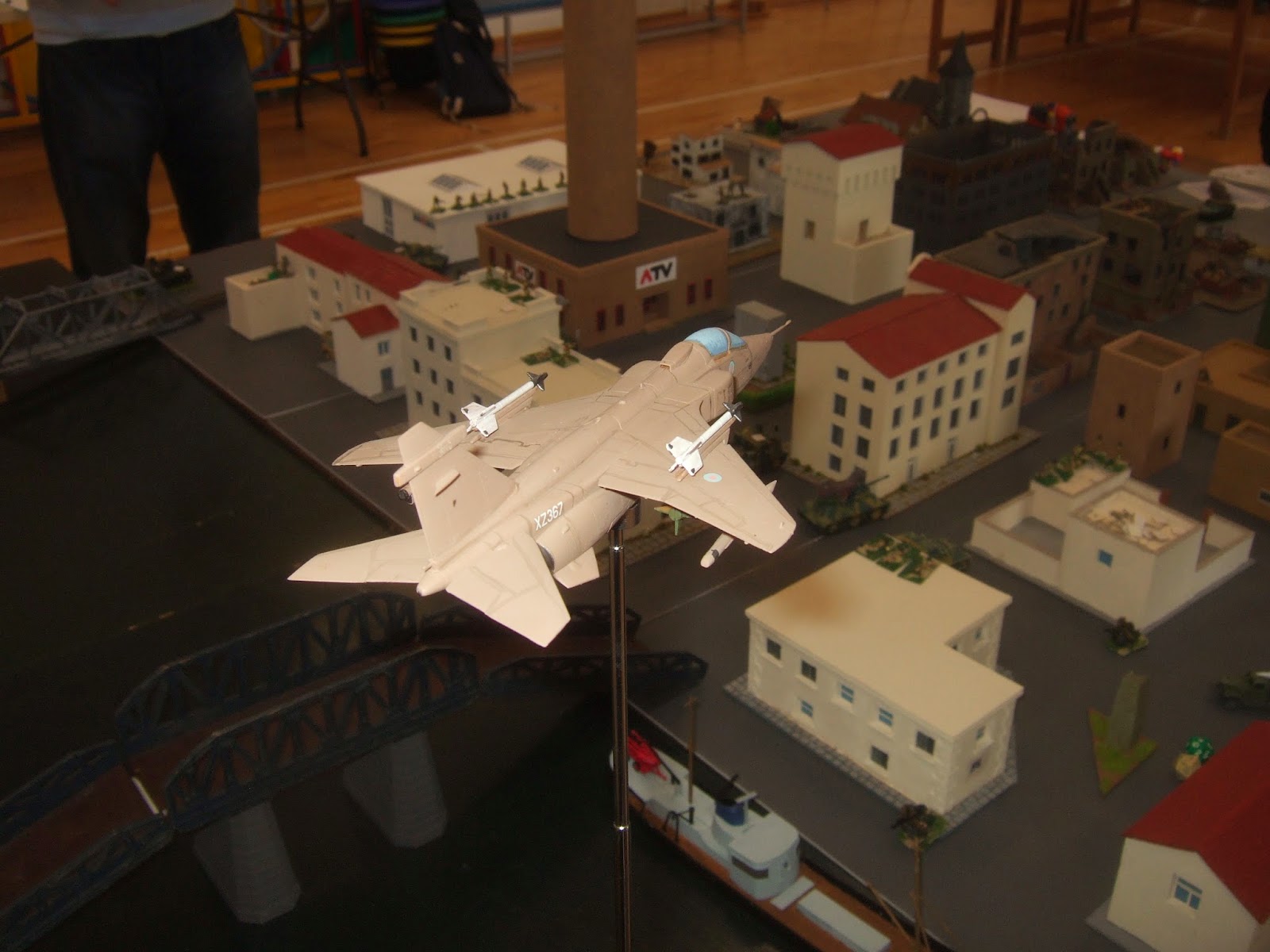 ... followed by a heli-borne assault on the roof of the former Italian embassy. 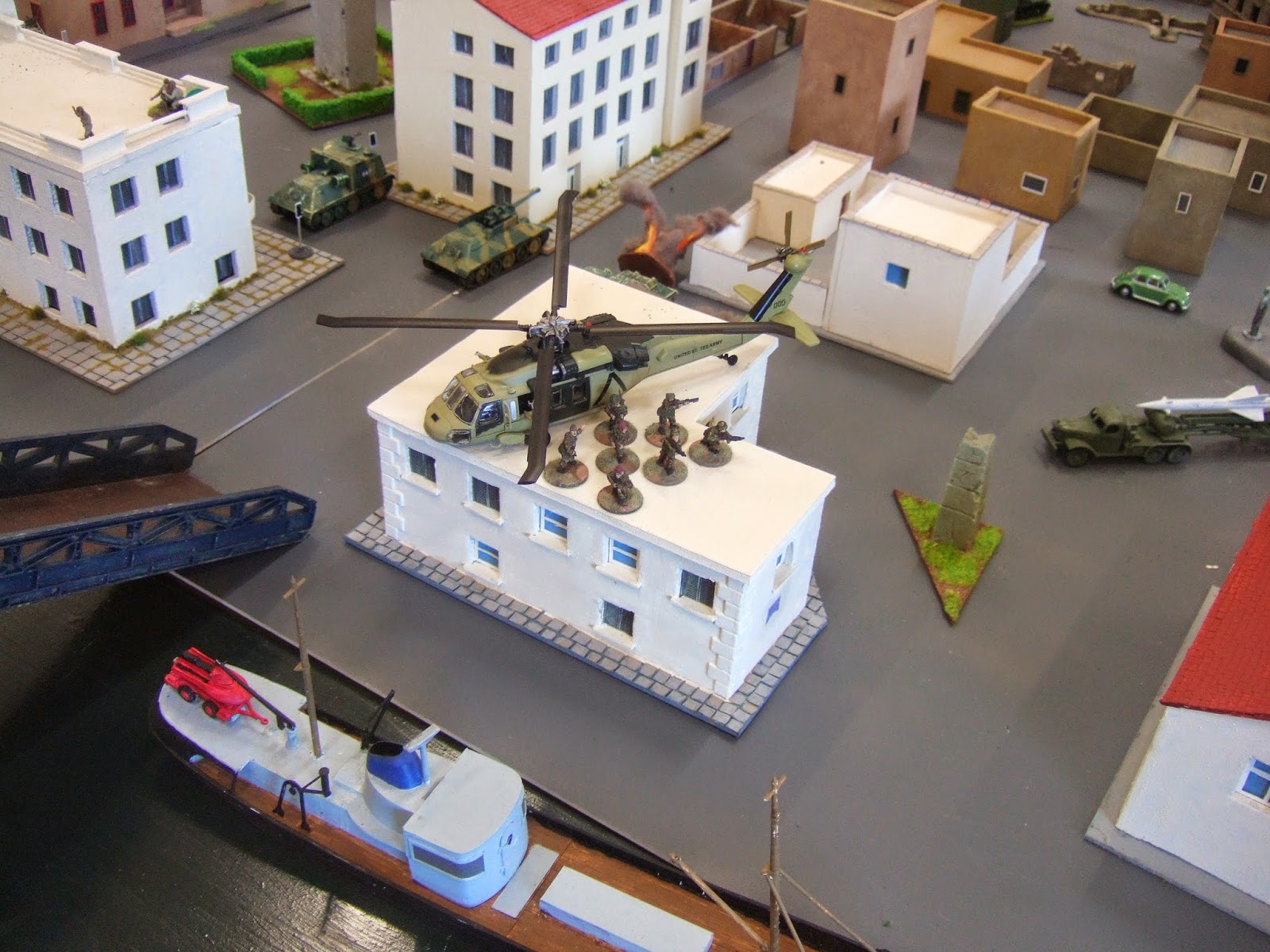 These troops would subsequently discover that the coaster moored at the nearby jetty contained an interrogation centre for the Government's political prisoners!

So having pissed off the Turks last time, NATO has at least balanced things up by annoying both the Armenians and the Government!

Posted by Counterpane at 3:07 PM 2 comments:

I'll try and post a full write-up later but for now here are some photos of Day Two.

On Saturday evening, Richard P reminded me that during the Matrix Game we played in the run-up to Crisis Point 2015, he had successfully infiltrated an Italian Special Forces team into Tcherbevan.  I suggested that it might be interesting if these guys had managed to set up shop in the tower of the ATV building.

When we set up in the morning Ian S placed a three-man observer-sniper team on the roof of the same tower!  We therefore started off with a short, sharp action in which the Italians quickly dealt with the Andreivians.  We used two up-turned paper plates as the floors of the building.  Here we see the Italian just after they'd finished off the Andreivians with one loss to their own side. 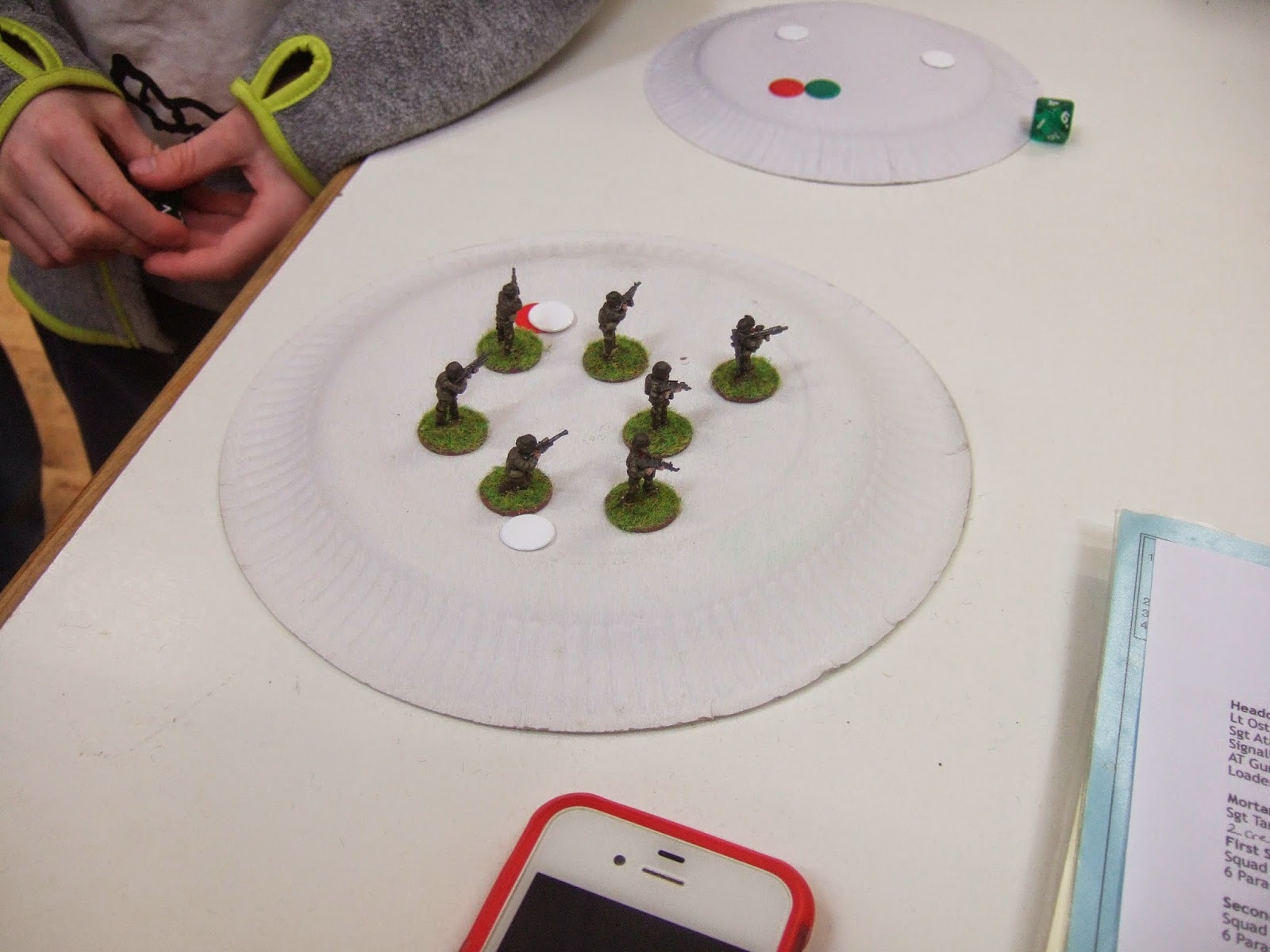 Did the Italians shoot wounded Andreivians who would otherwise have surrendered?  We'll probably never know.  Unless, of course, a CCTV tape turns up.... 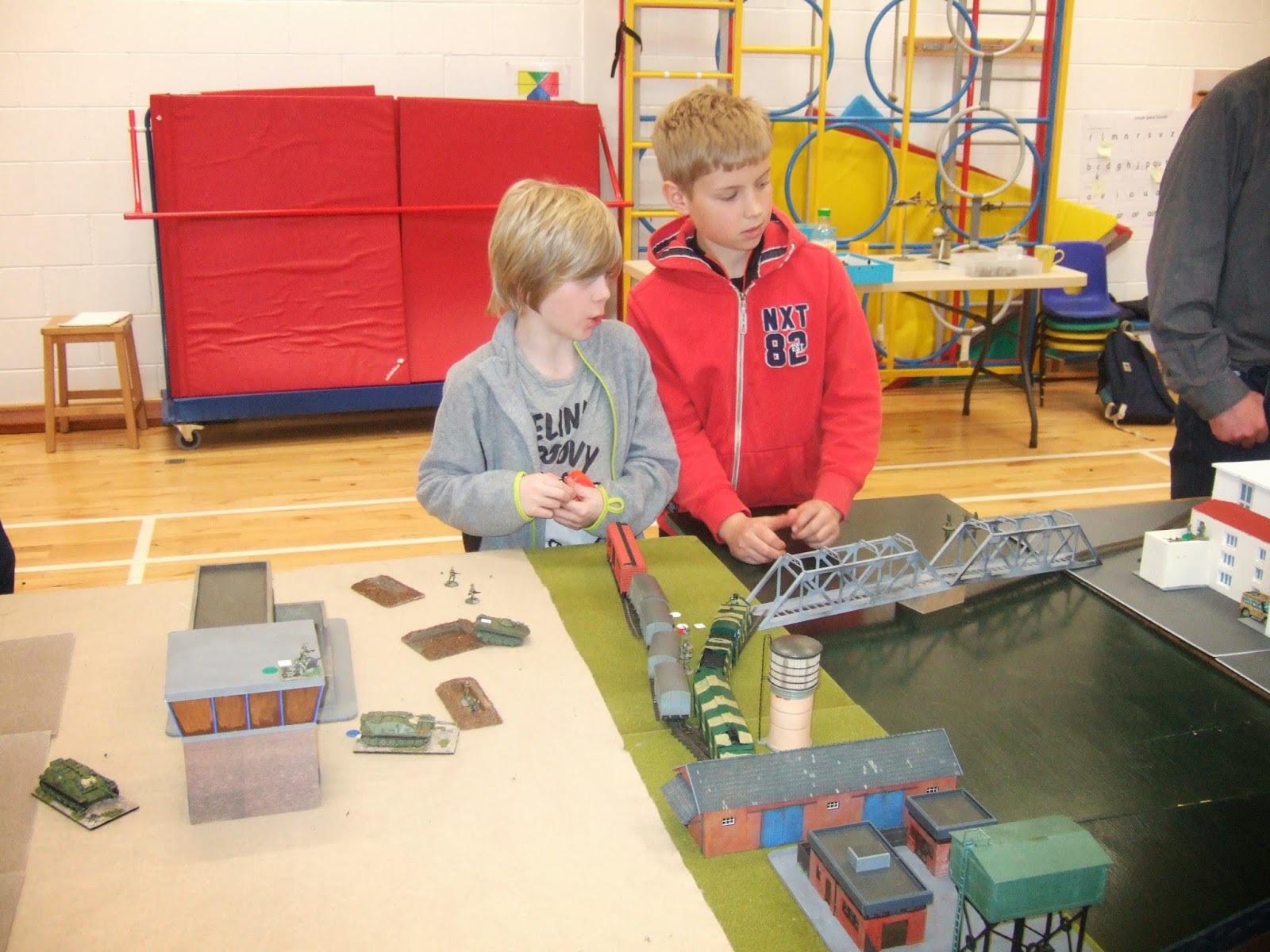 Two of our younger attendees played Andreivian Paratroopers defending the river bridges against Russian attacks from the airport. 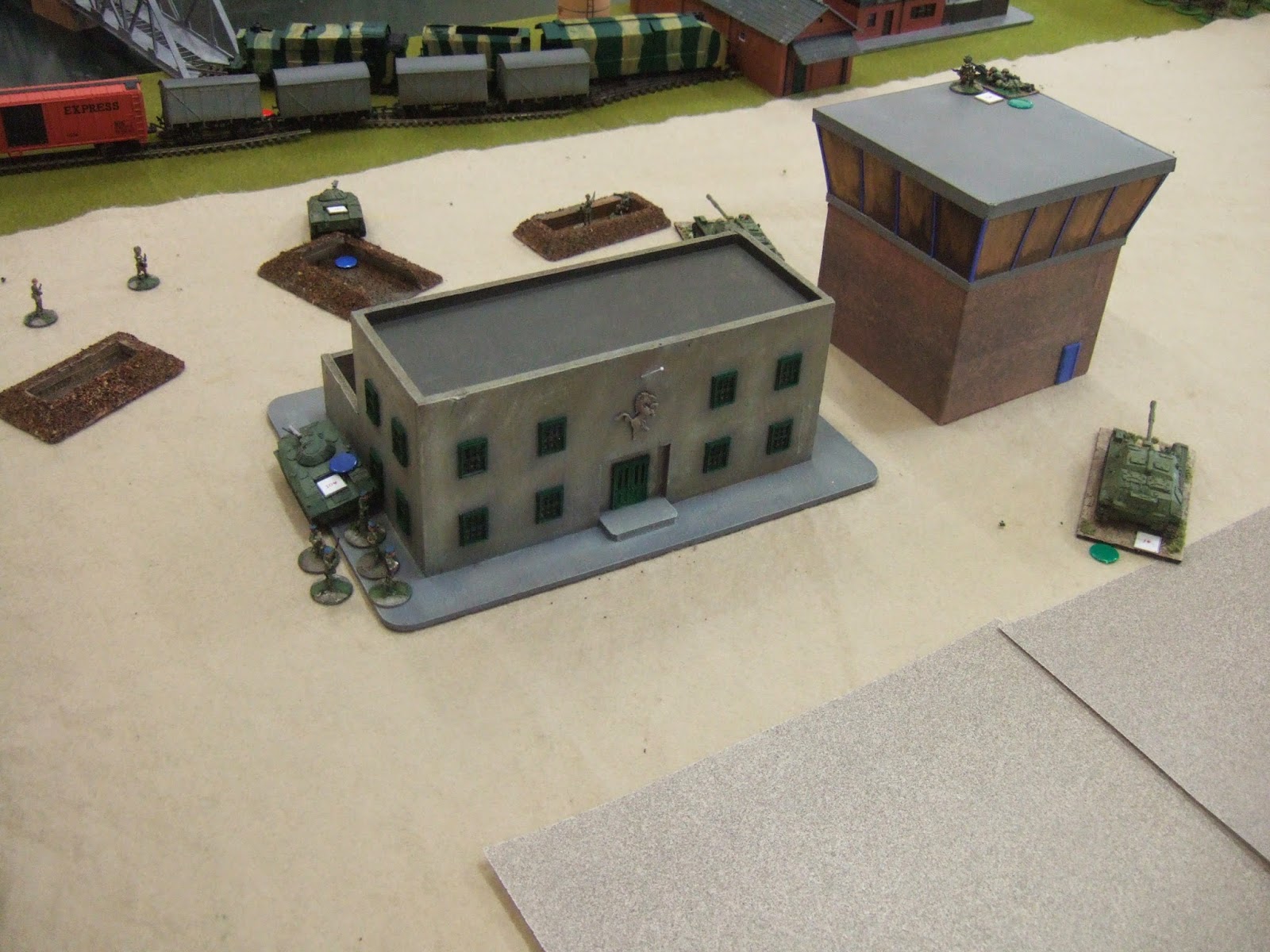 Mark Kniveton provided some lovely models including this ASU-85 to support my VDV airborne types.

Fighting continued in Tcherbevan.  This mule-train brought some useful supplies (AT-4 AT launchers) for the Turks... 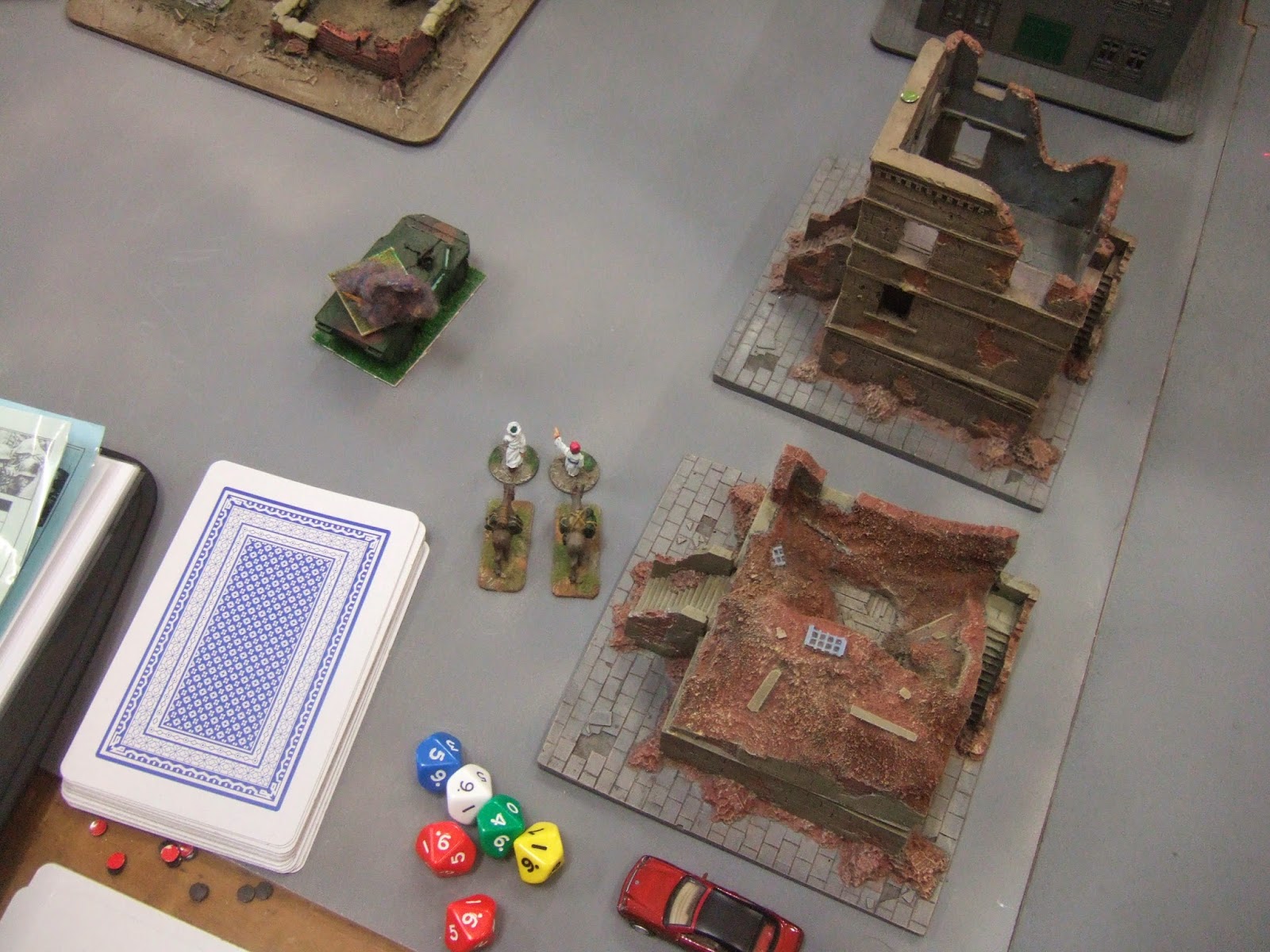 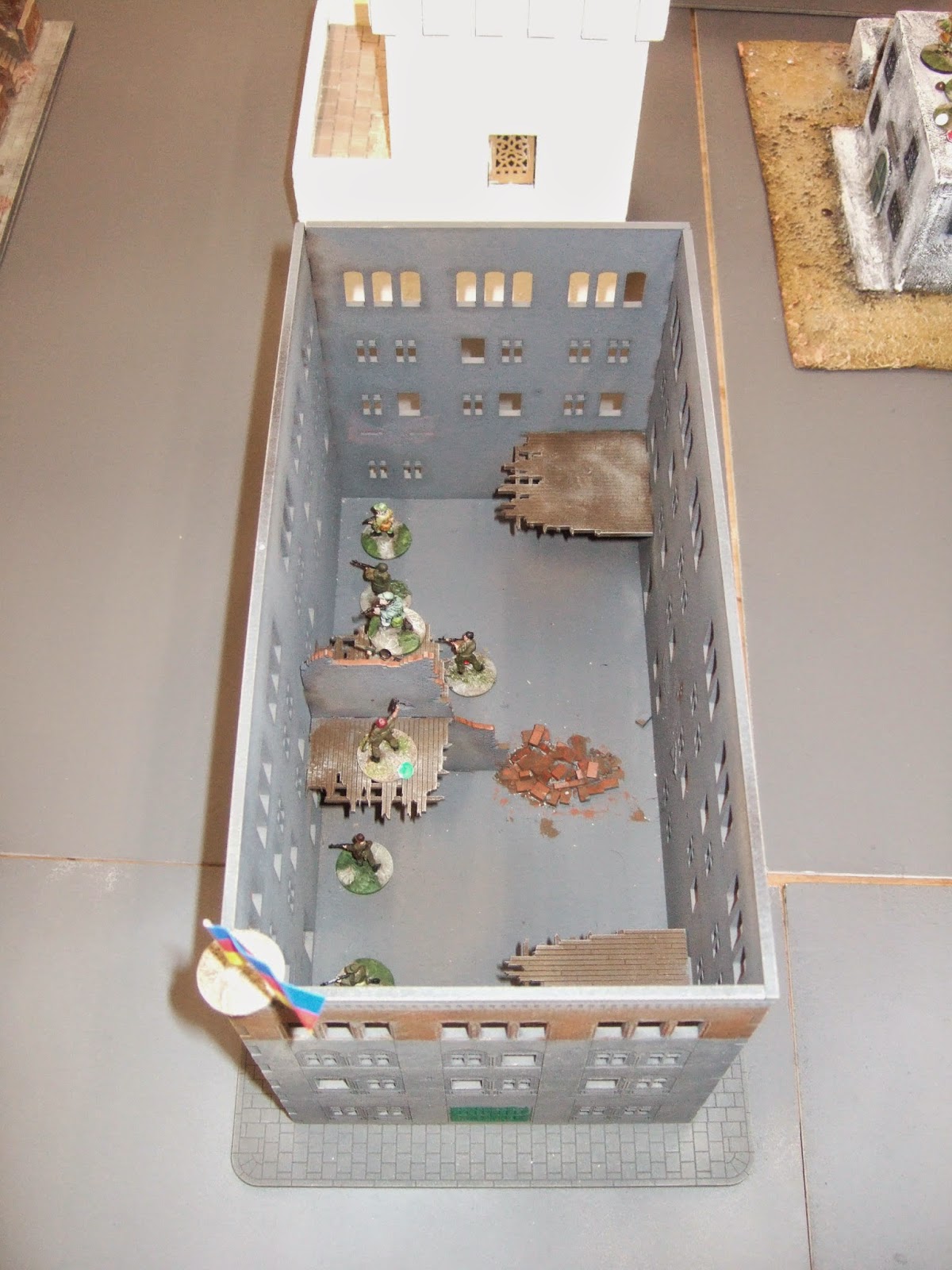 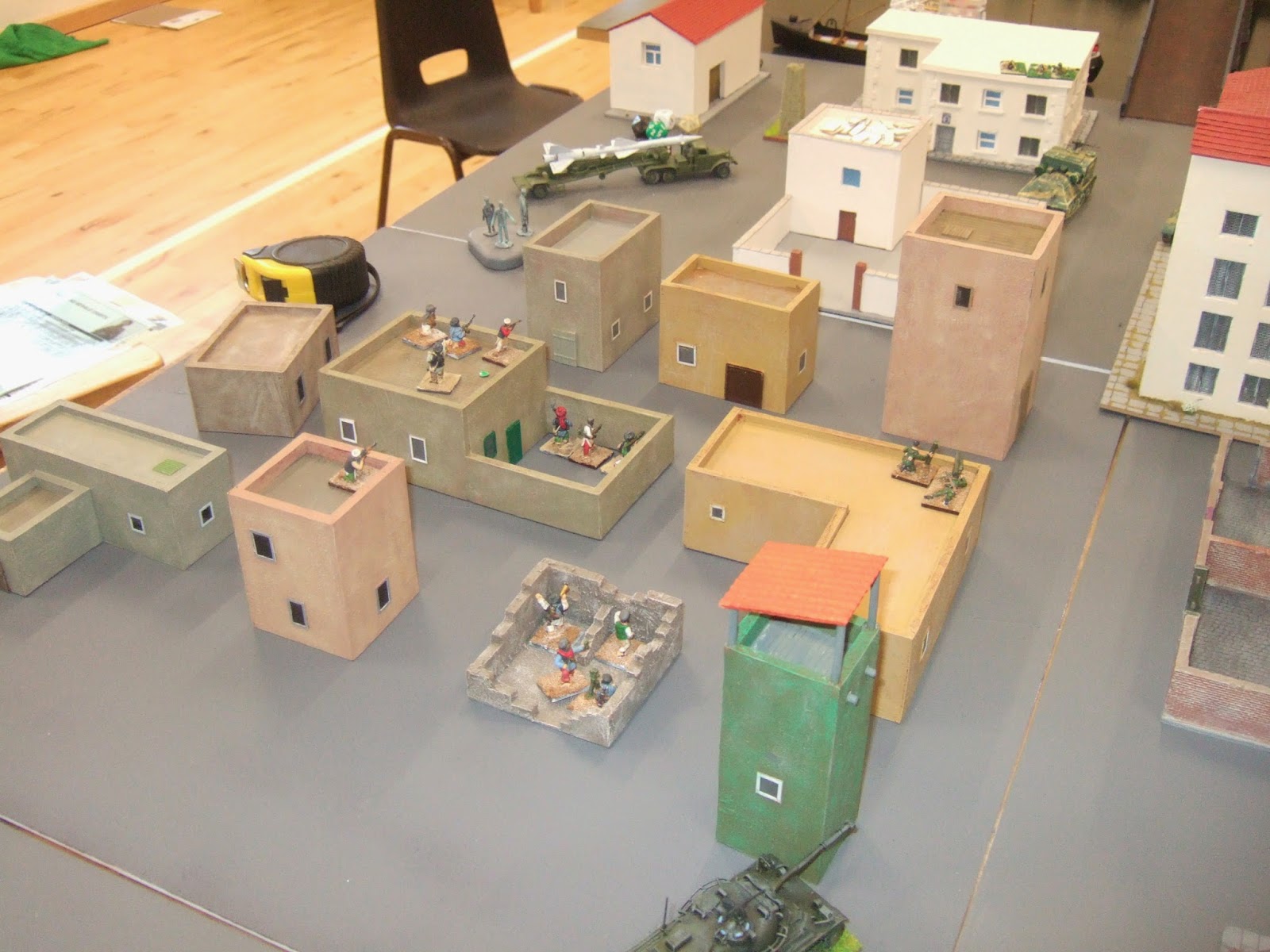 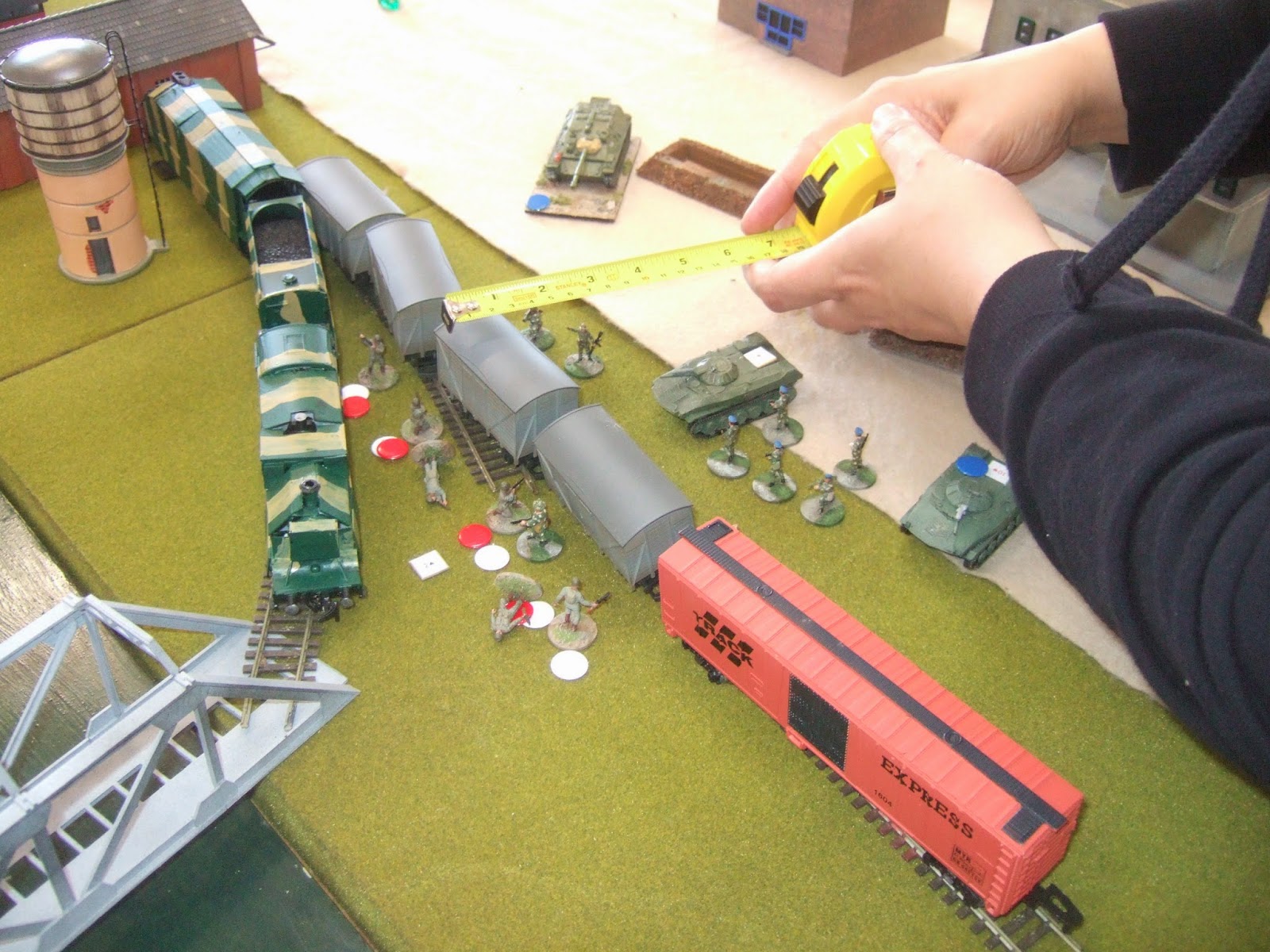 More photos to follow later.
Posted by Counterpane at 5:27 AM 8 comments:

Fierce fighting continues in war-torn Andreivia.  In the northwestern area, Russian forces have pushed out from their bridgehead on the coast at Mdinar.

They are opposed by regular units of the Andreivian Army.

In the south a fierce action developed between Italian NATO forces and the Mujahideen - foreign volunteers fighting alongside the Andreivian Turks.

Unfortunately the Italian troops arrived too late to rescue two captured British soldiers (believed to belong to a Hereford-based unit).

So I'd say Day One was a great success.  In the north, Ian's Andreivian Government forces fought the Russians almost to a standstill but they were forced to call in many valuable reinforcements in order to do so.

In Tcherbevan itself, Andy's Turks captured a building on the Armenian side of Culture Ministry Boulevard - I perhaps didn't give Andy enough of a numerical advantage to play a convincing attack-v-defence scenario but Andy and Rob seemed to get on with it OK.  They'll both have interesting stuff to do on Day Two.

And in the south, Richard and Jamie had a frustrating time trying to clear the Mujahideen away from the southern road.  Powerful as an Ariete MBT is, a determined fanatic with an AK-47 can be damned difficult to winkle out of a wooded position.  Thanks Stuart for your sterling efforts.

Posted by Counterpane at 2:24 AM 7 comments:

So it's Friday and time to start packing the load of stuff to go to the venue for Crisis Point 2015.

I've been down to B&Q and bought a new runway for Tcherbevan International Airport.  Good of them to sell 1/72nd scale tarmac in handy sheets.  I've also been to school to make sure everything is in hand and collected the keys to the old village hall so we can get the trestle tables.

Here's the pile so far. 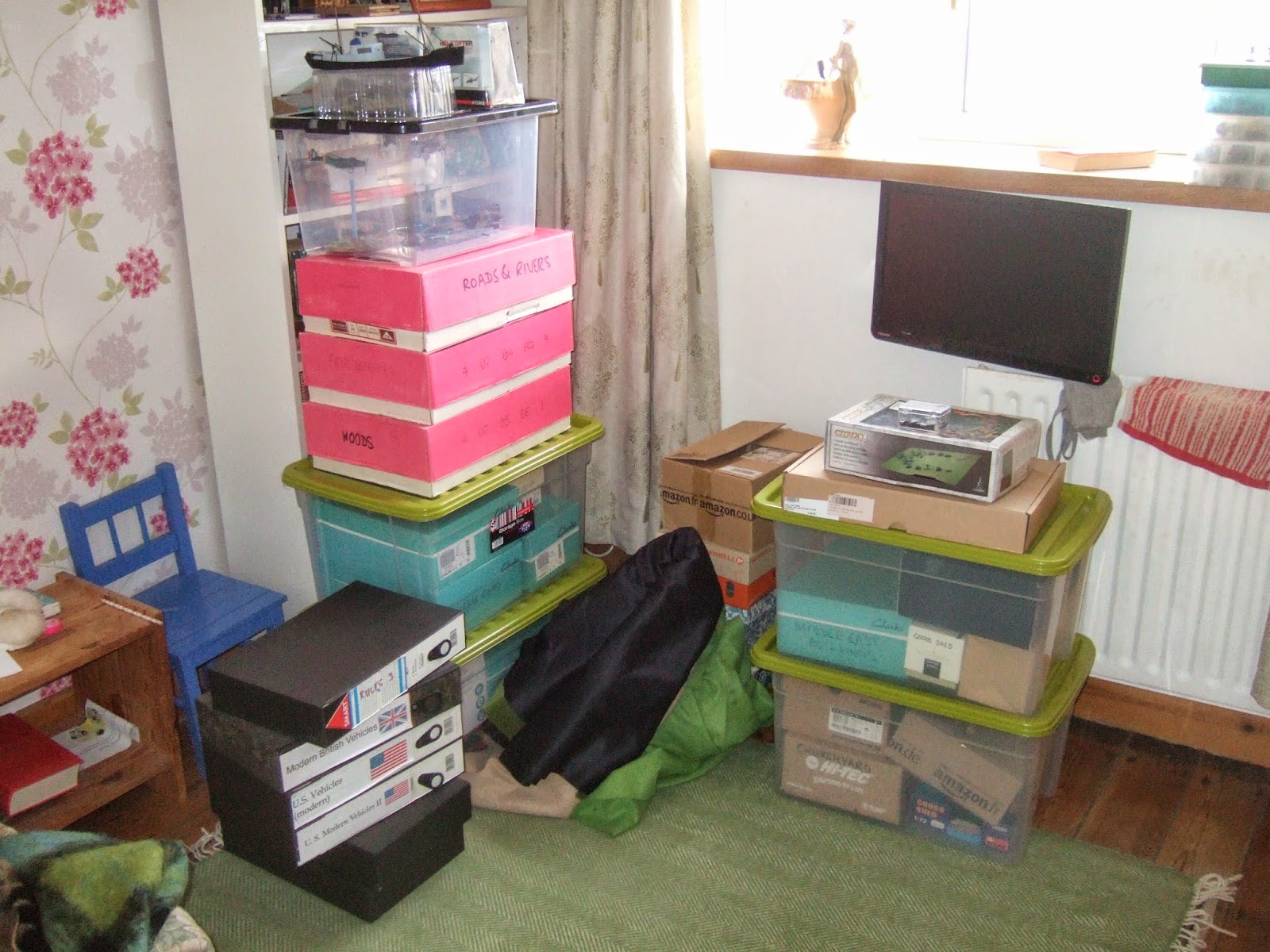 Just a Week to Go

Next Saturday is the first day of Crisis Point 2015.  Just finished are these buildings representing the partly ruined outskirts of Mdinar. 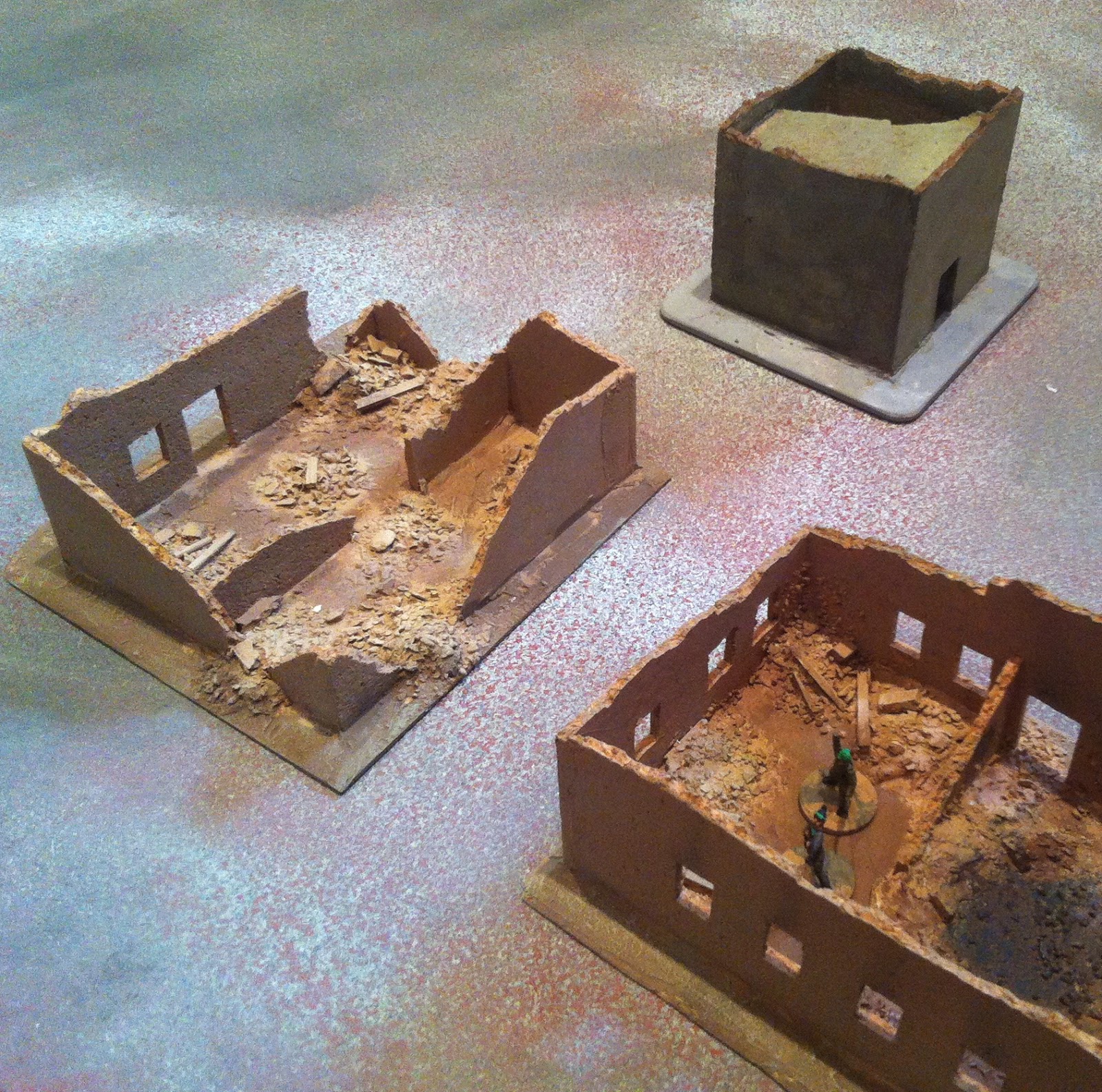 These buildings were made from a single cork floor tile, a couple of pieces of mdf and a cork drink mat.  Rubble from cat litter, matchsticks and off cuts of cork. 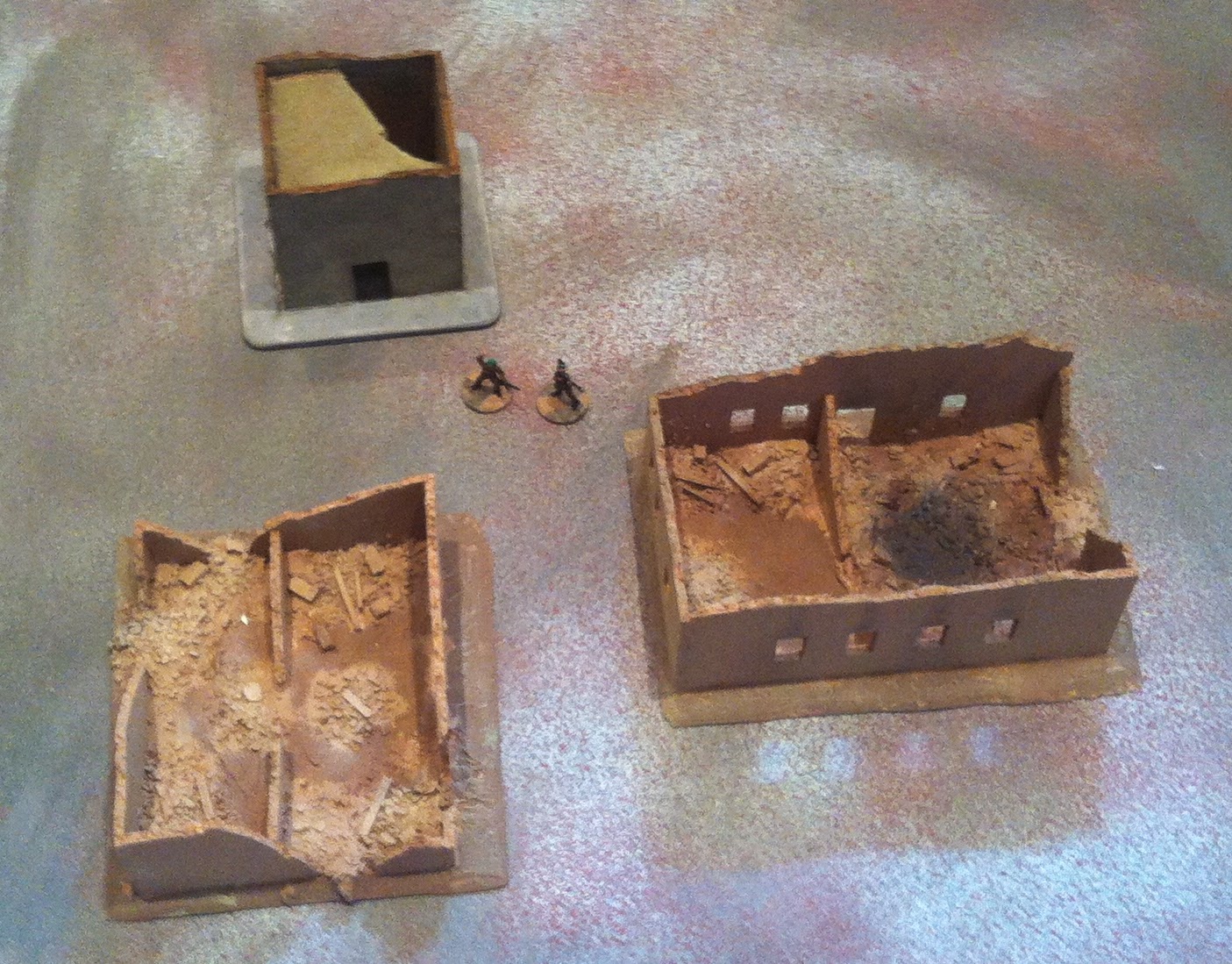 Posted by Counterpane at 5:51 AM 4 comments:

Among the figures very kindly donated by members of SOTCW in support of Crisis Point's chosen charity were these very nice Brits. 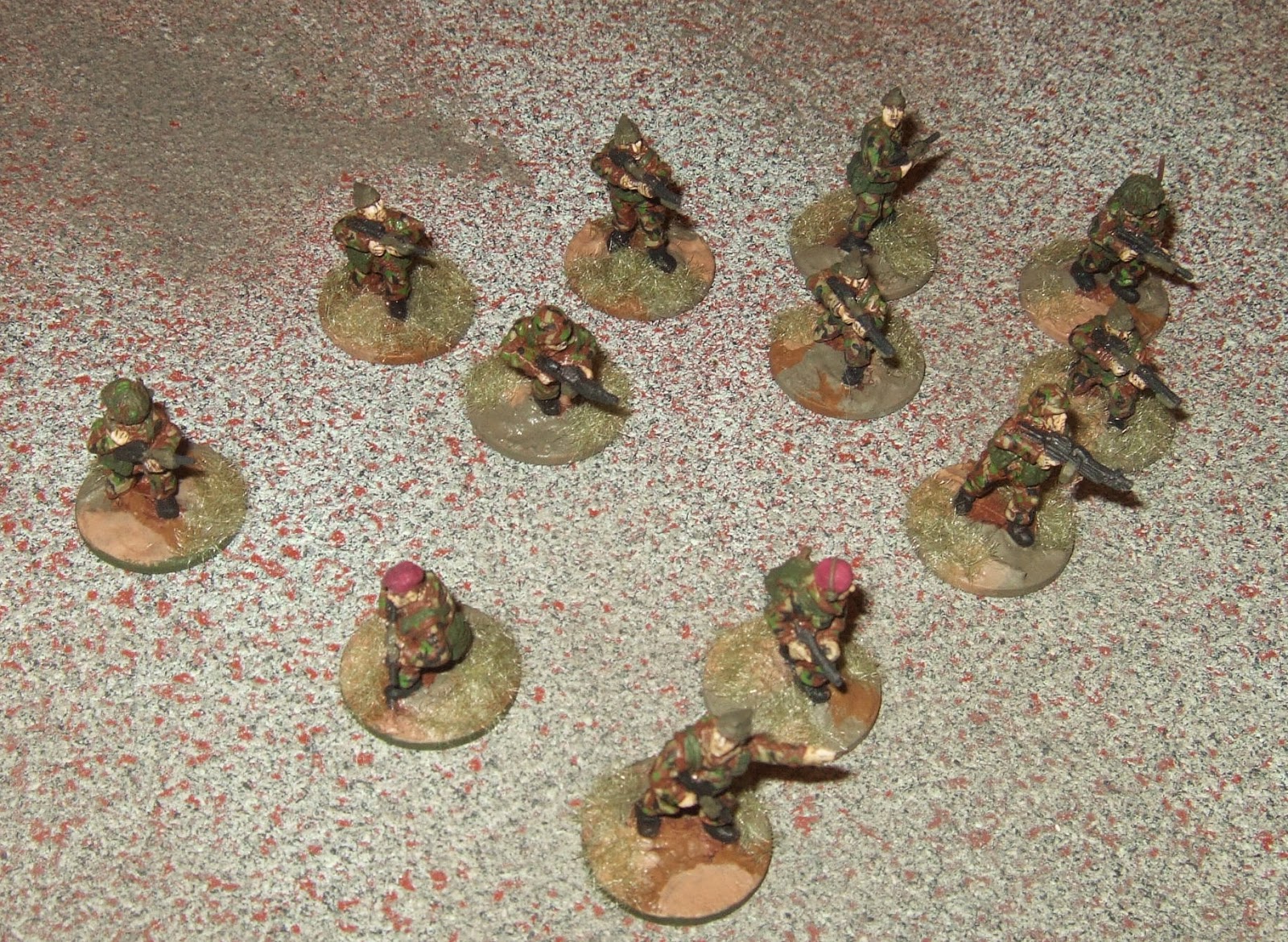 Unfortunately, illness in January prevented me attending the Penkridge Wargames Sale where I had planned to offer them in one of my Crisis Point Lucky Bags.  Instead I decided to paint them up so they can be used in the game.  After the game they'll go onto eBay to be auctioned in support of The Forgotten Heroes. 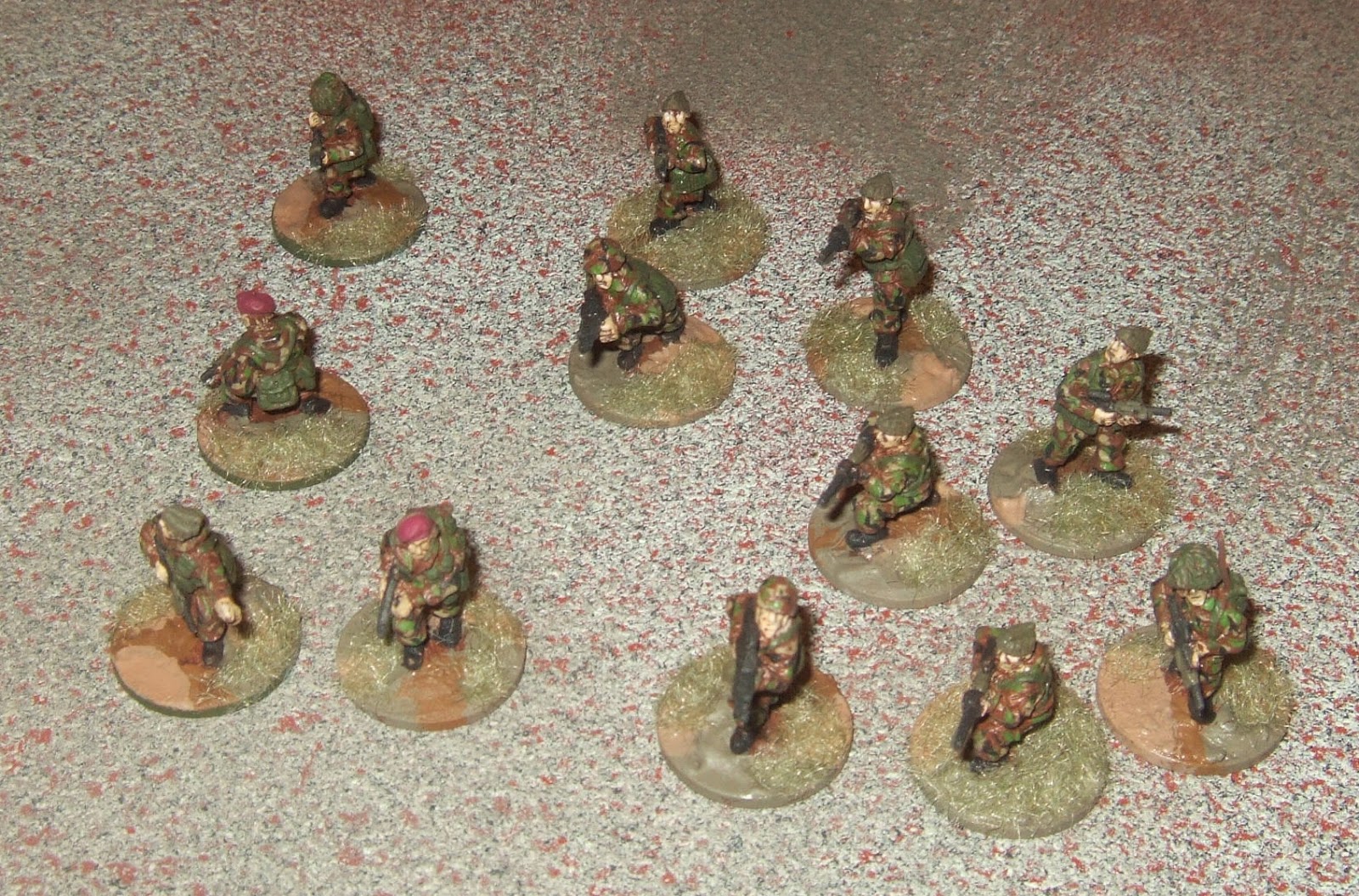 In the game they'll become a patrol from 10 PARA(V) , probably to be deployed from my Special Forces Chinook.

On the workbench - Ruins

Searching through one of the drawers I use to store terrain building materials, I came across an unused cork floor tile and a couple of recut MDF bases.  Knowing I'll be needing more houses for Crisis Point later this month, I hastily knocked up these: 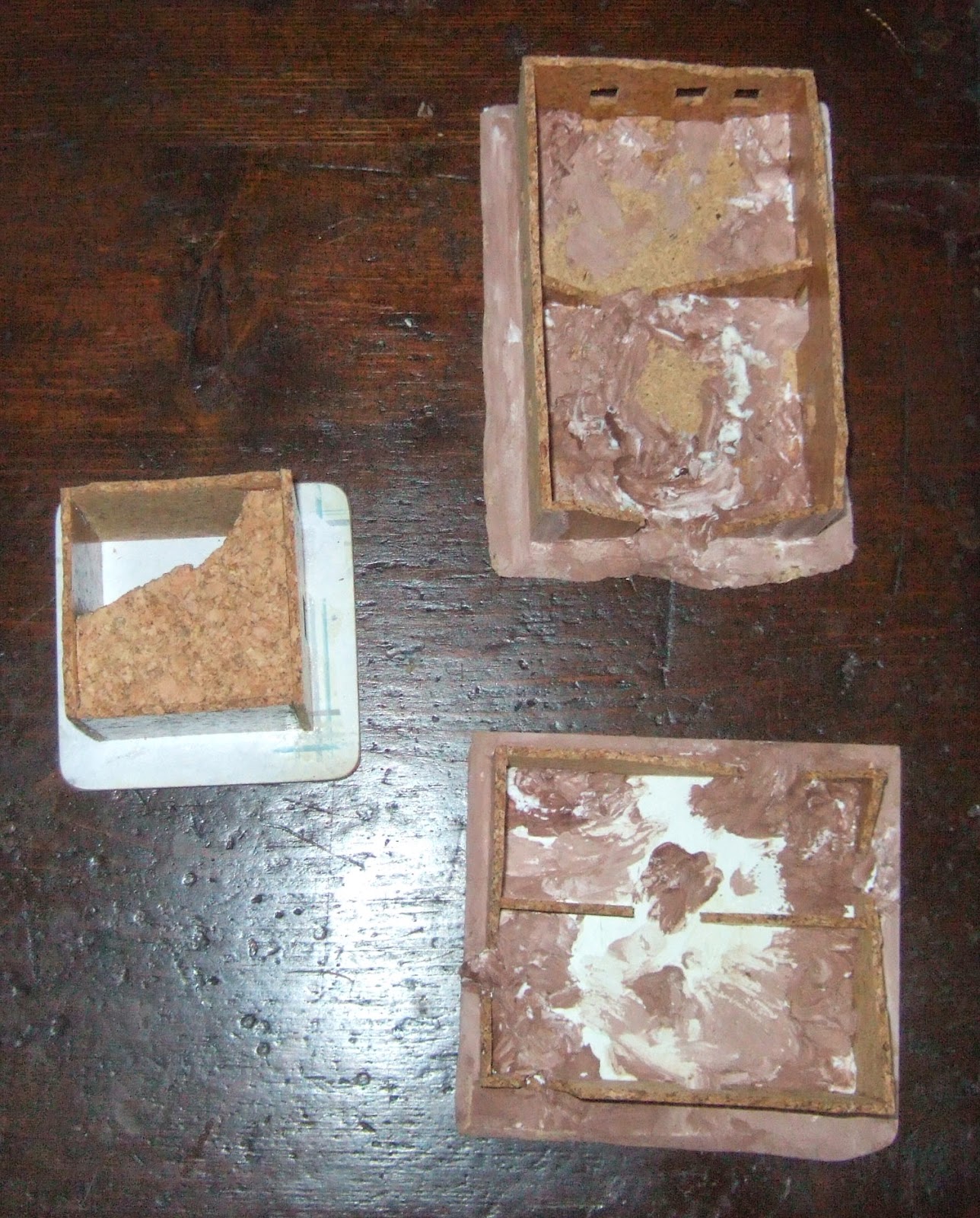 As usual, they can be clicked to enlarge.  Once they've dried, the next stage will be to add bits and bobs of wood, torn-off foamcore, more cork, cat litter and grit to the rubble piles and then paint. Should be a fairly quick process. 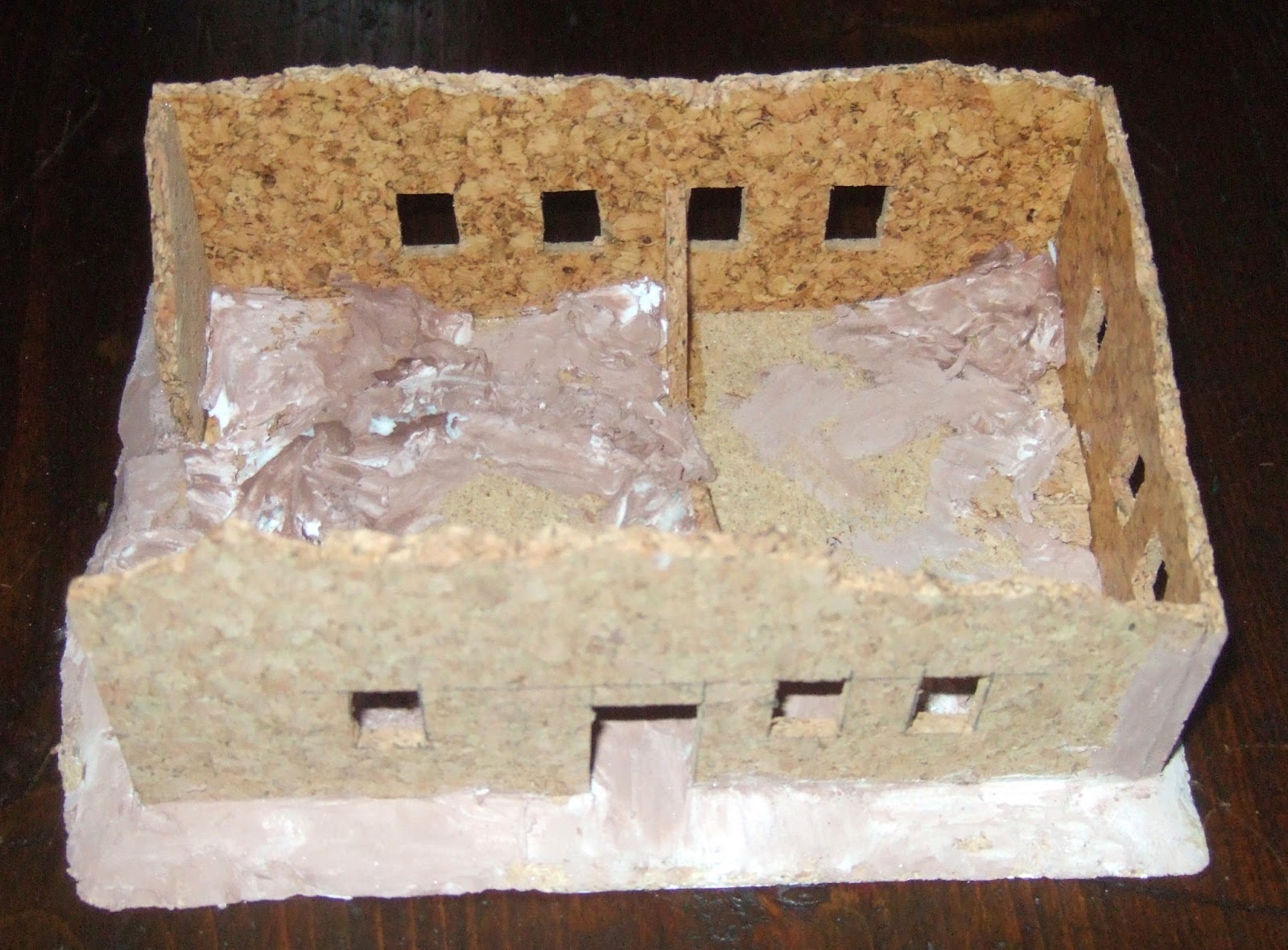 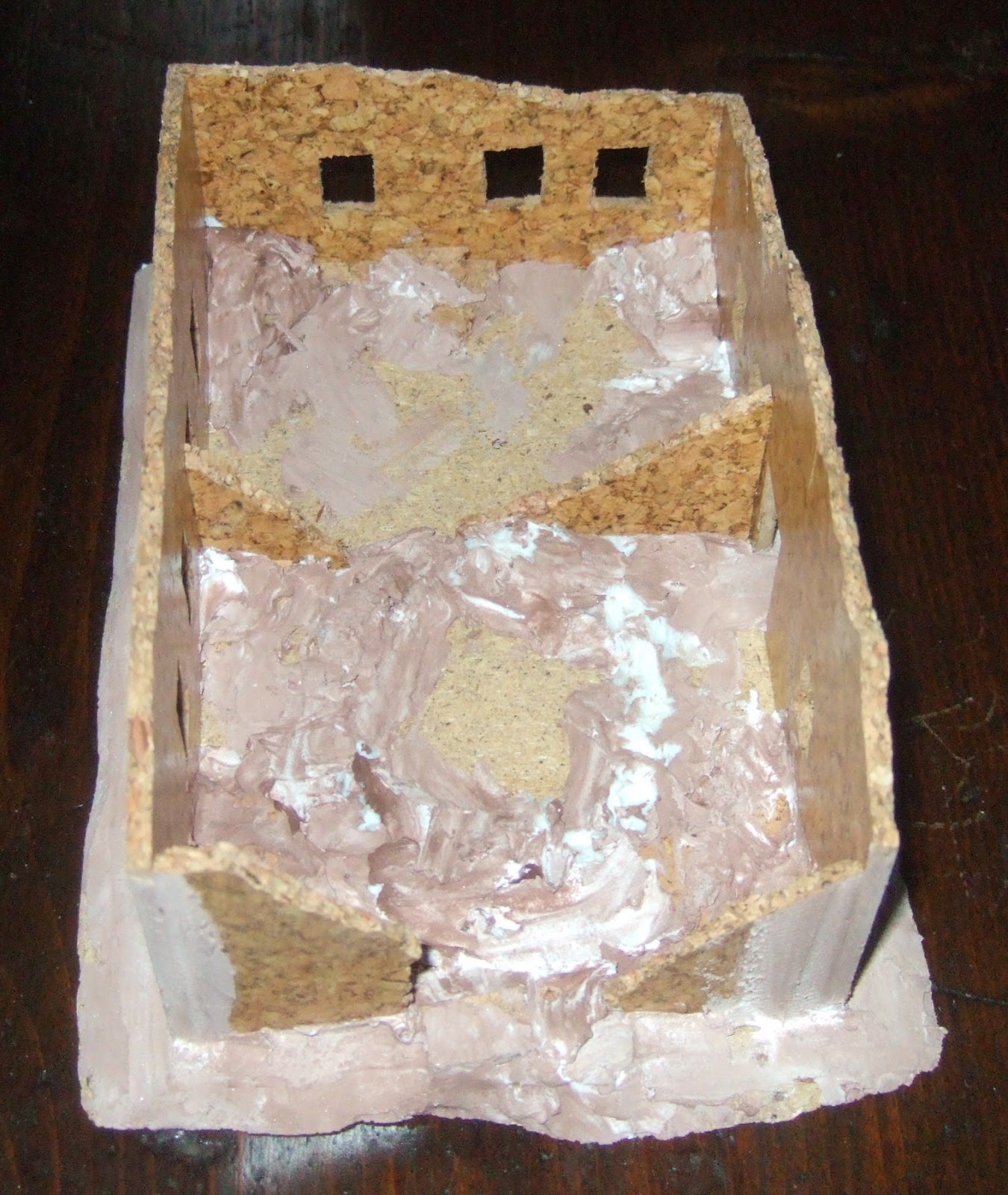 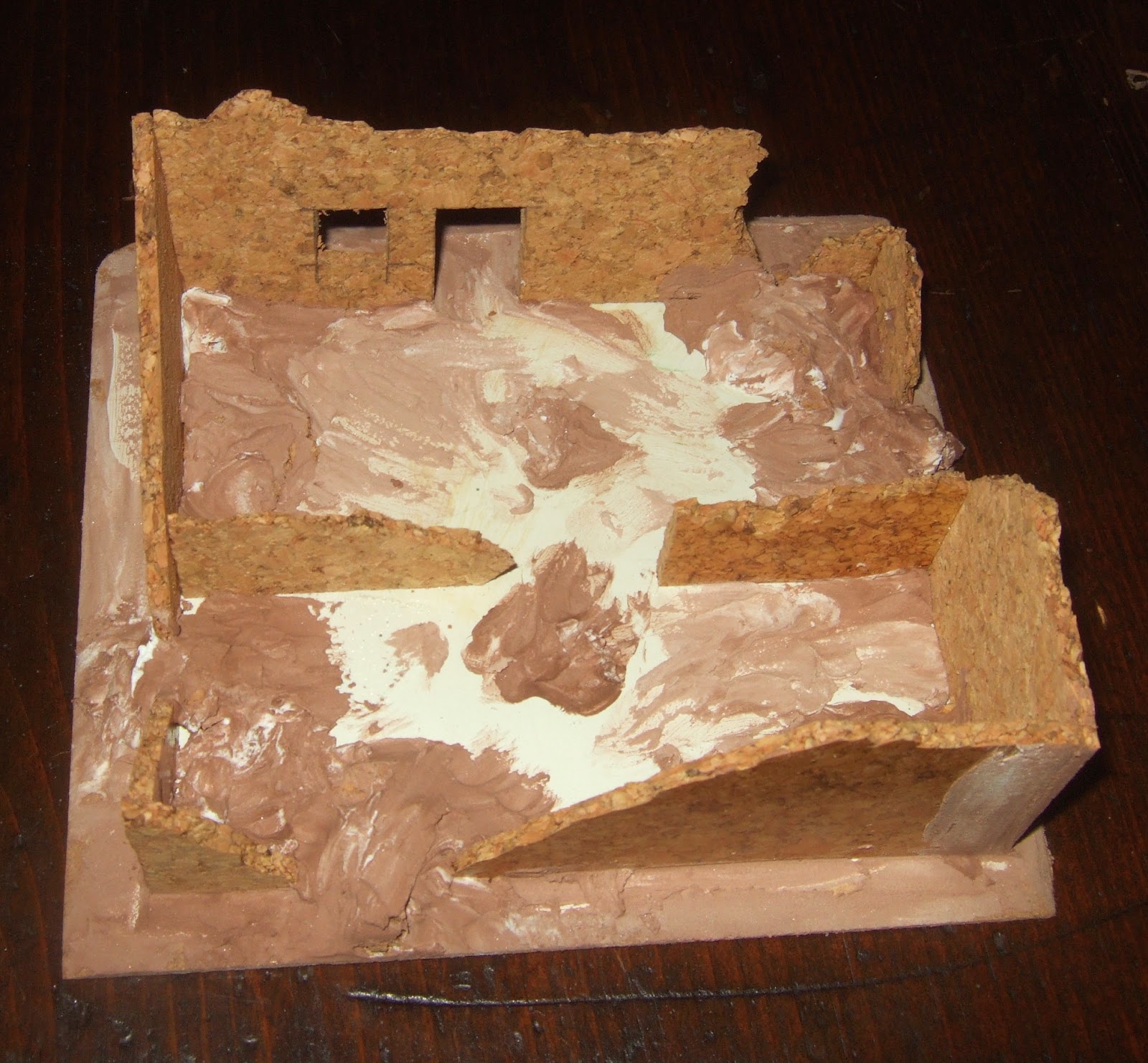 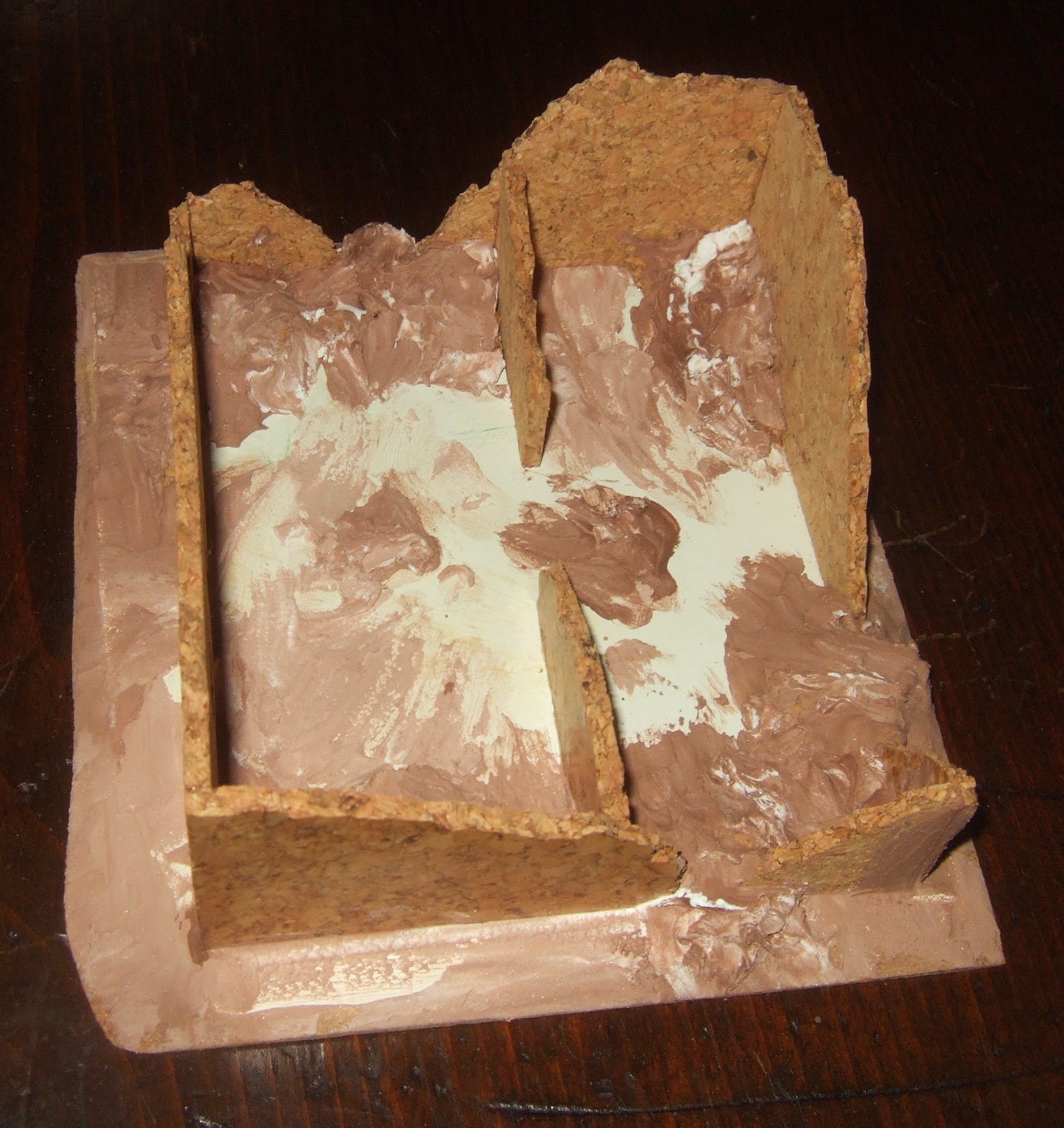 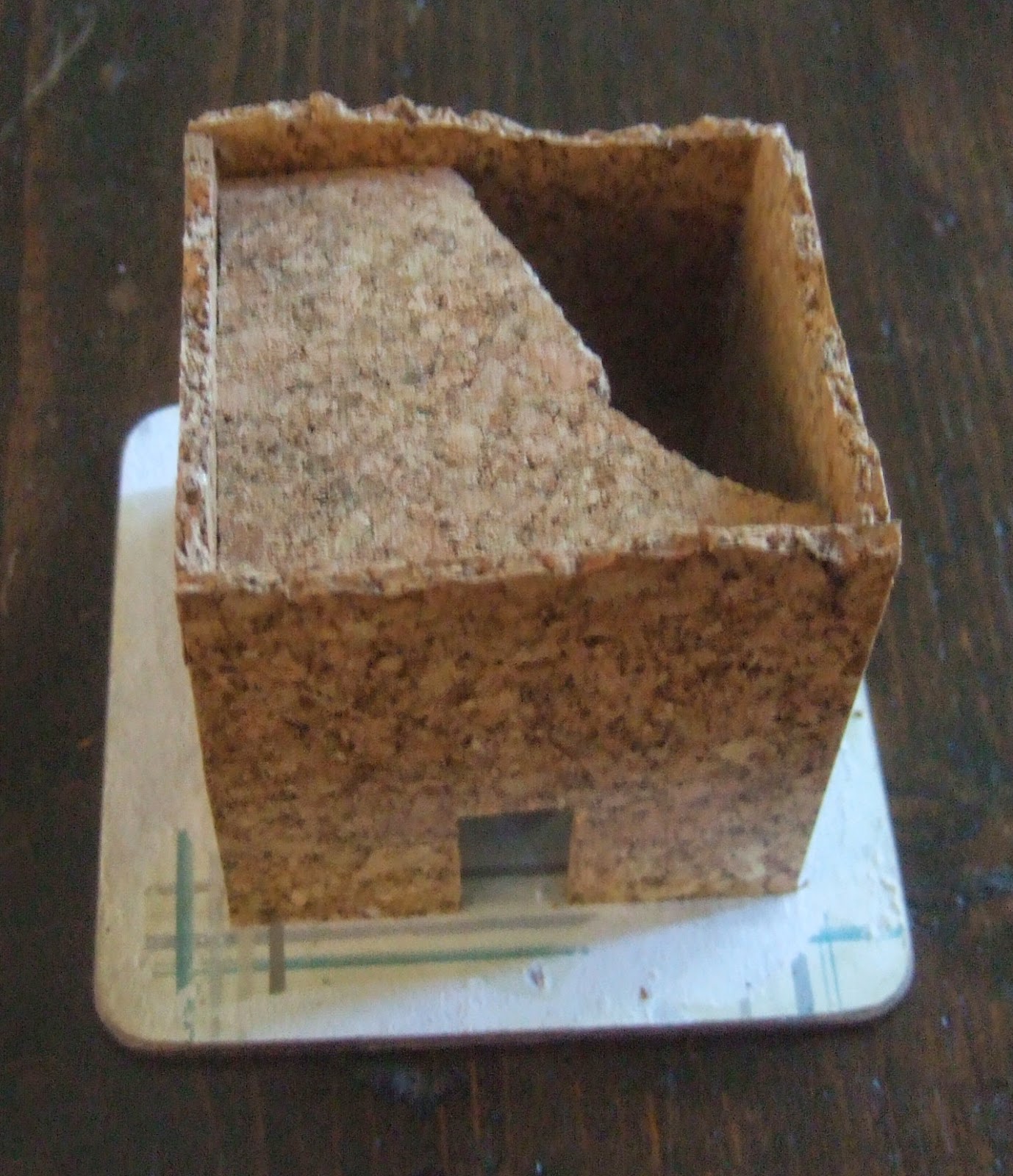 I\ve finished building the block of two shops that should form part of the town of Mdinar for this month's big Andreivian game.  As usual, click to expand. 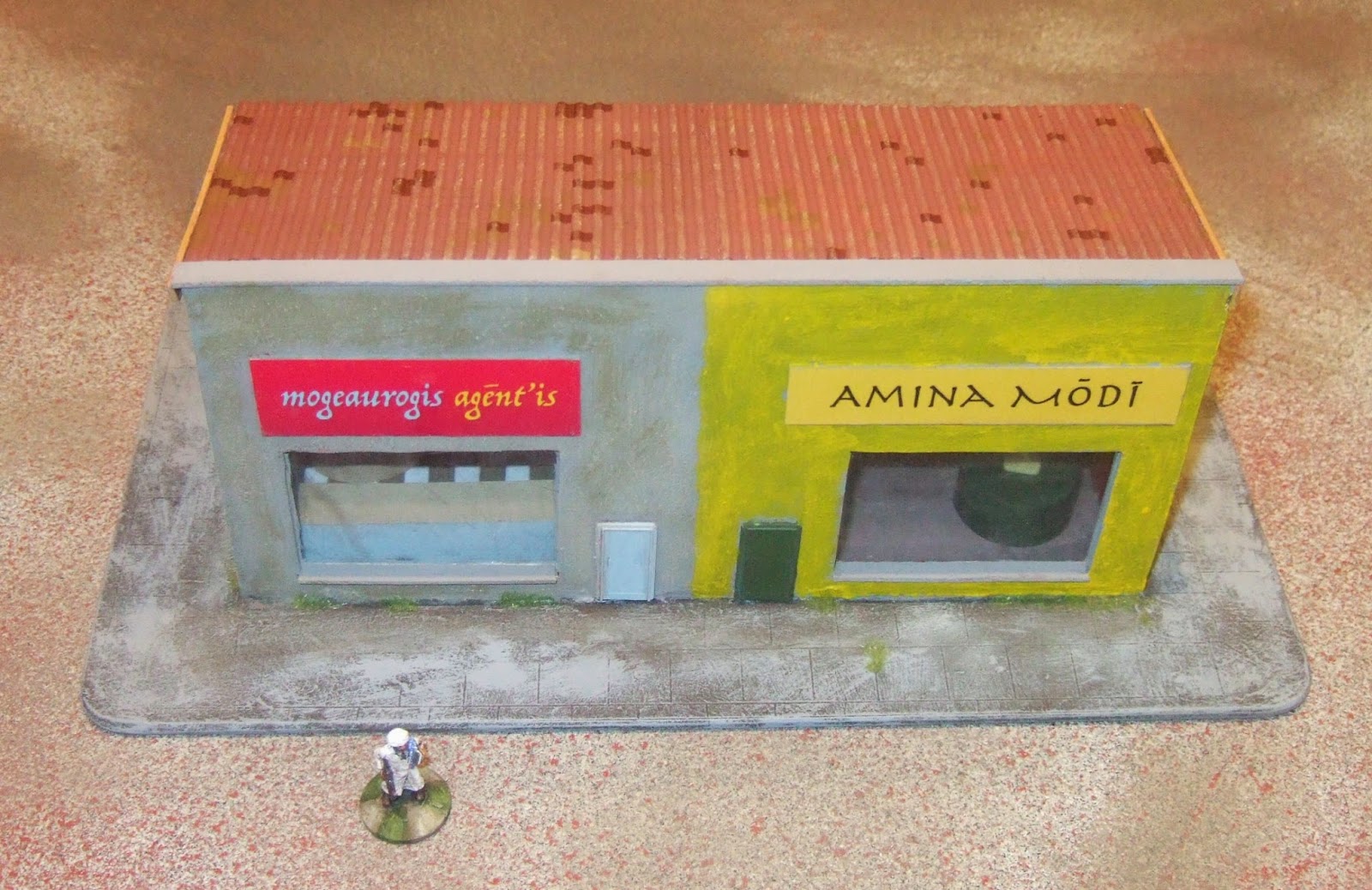 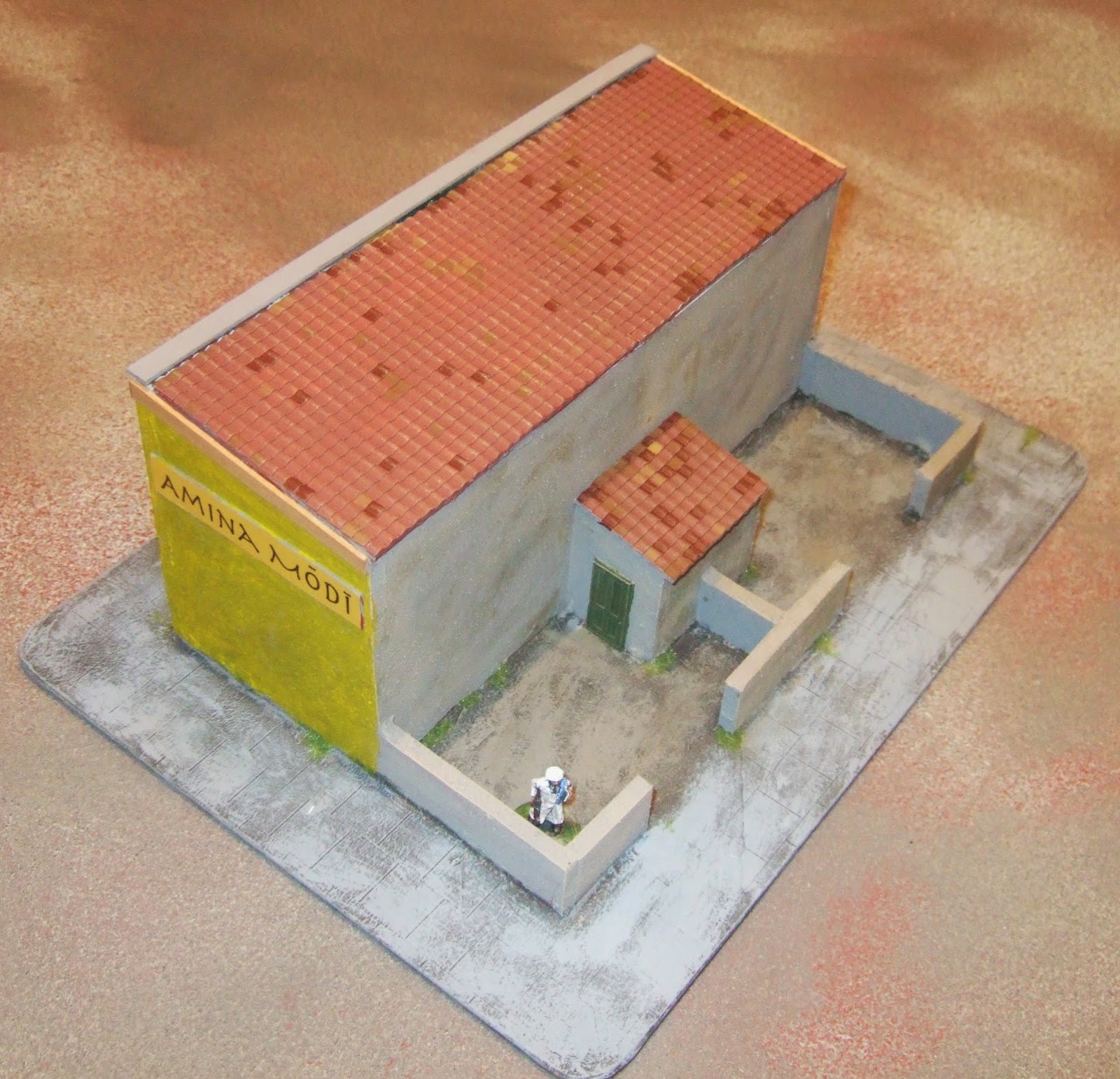 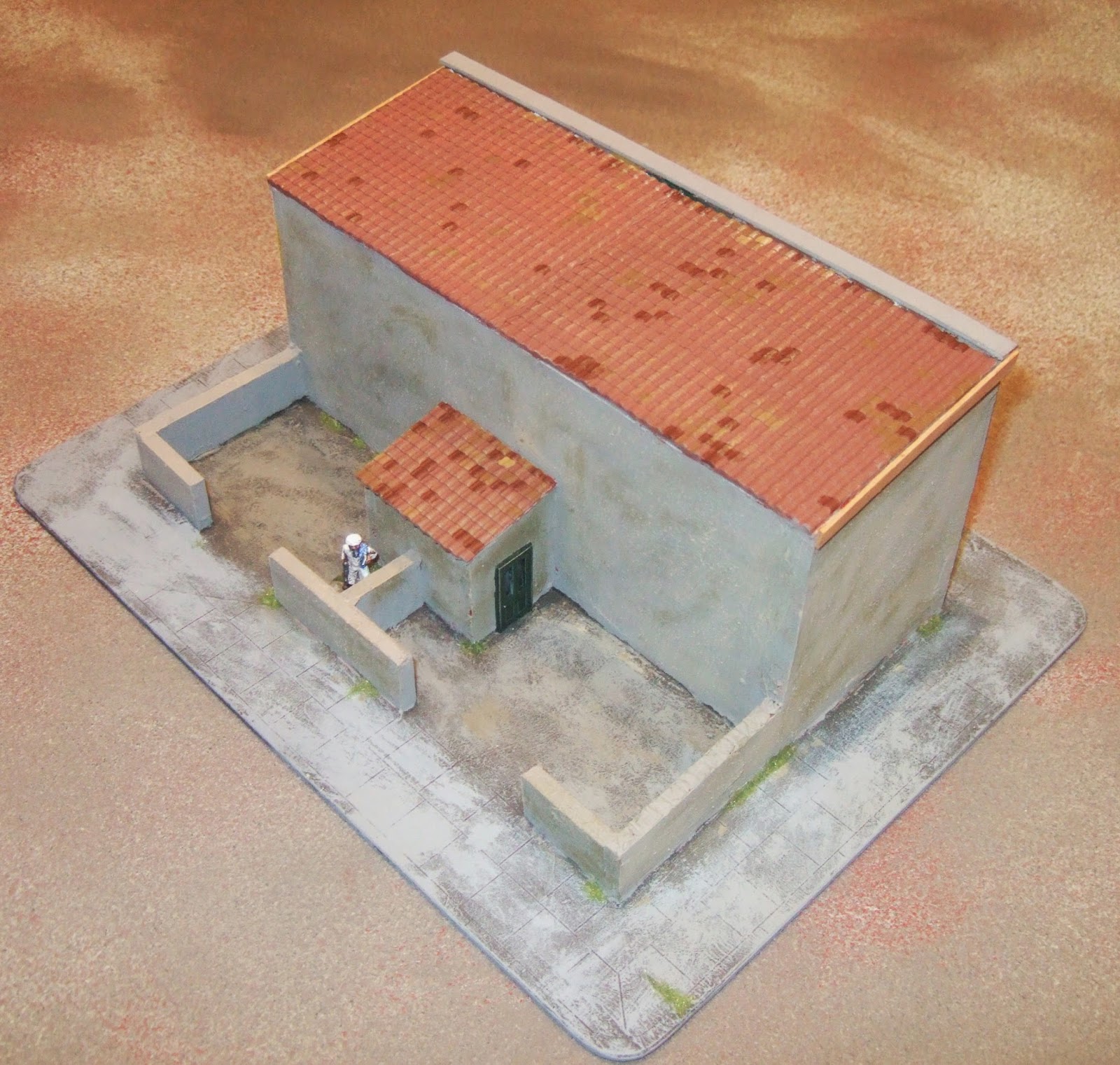 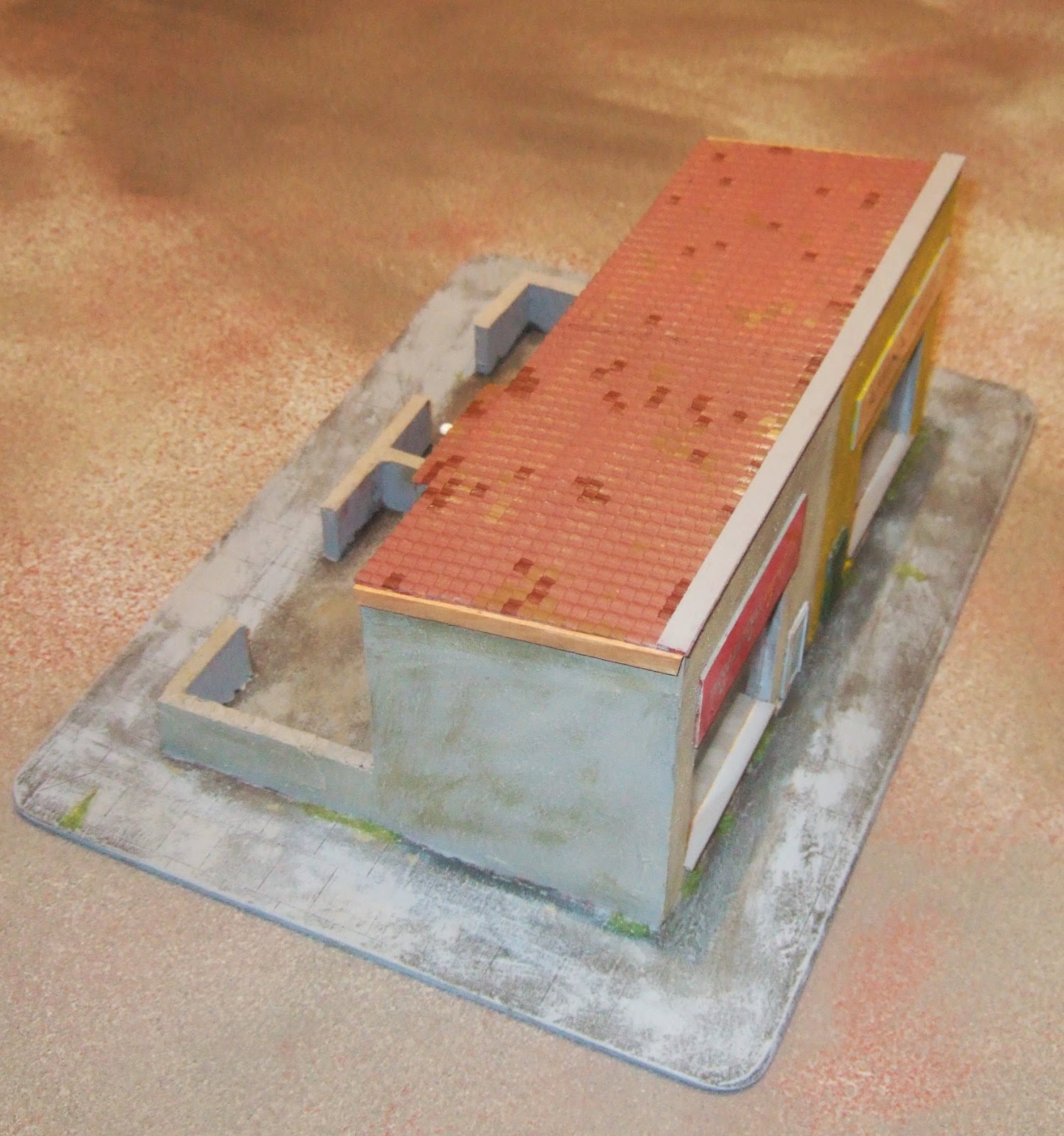 Despite spending little of the weekend at home, I've managed to make some progress on my block of shops.

First up I added some signs.  They were printed at high res on my inkjet printer on high quality matt paper and then glued to thick card before being cut out.  I then added a coating of see-through sticky-backed plastic.  This serves two purposes.  Firstly to make the sign look like a glossy plastic shop-front display and secondly to protect the sign during the next stage of the process. 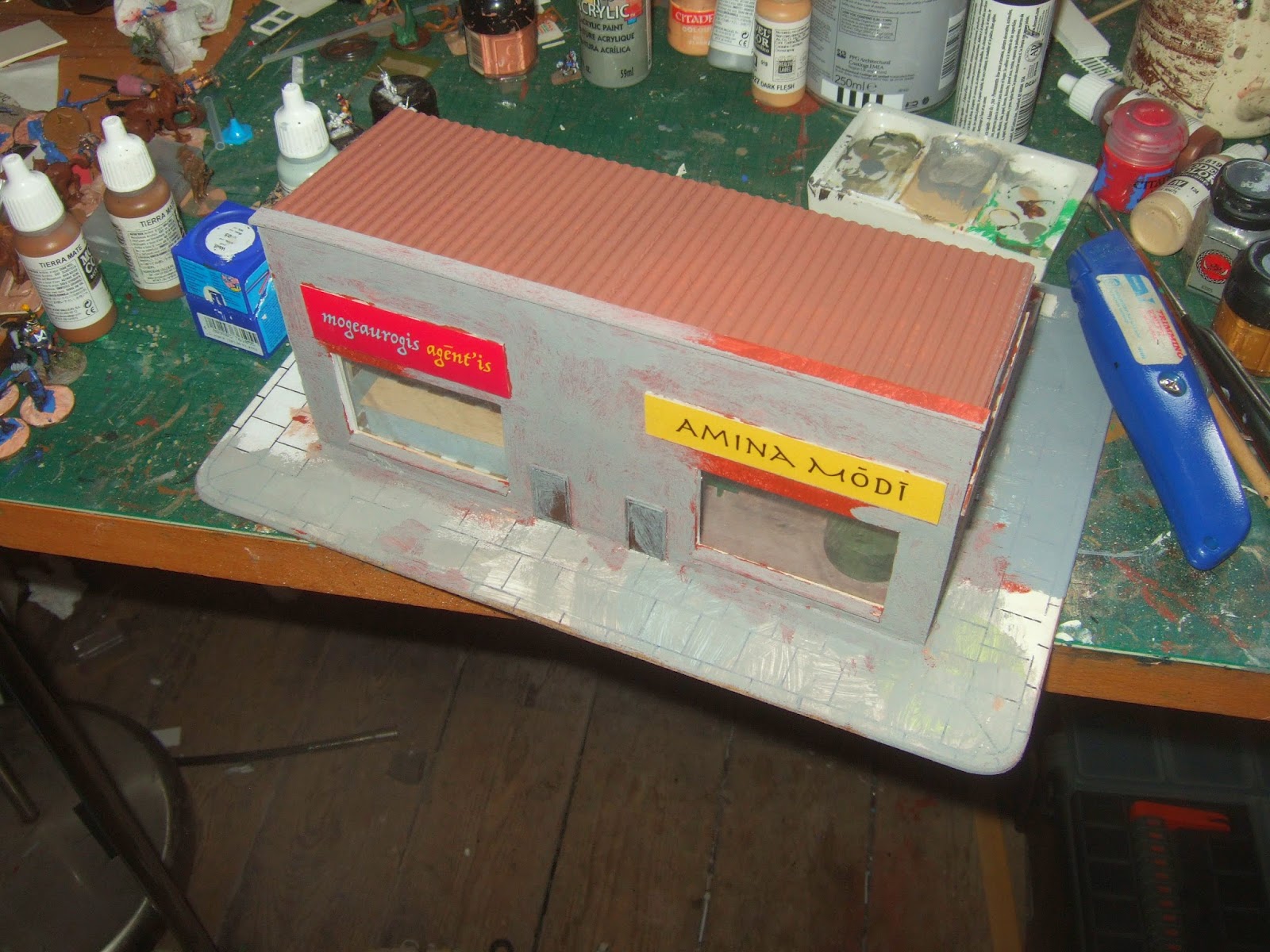 I then painted the pavement in a dark grey (GW Charadon Granite). 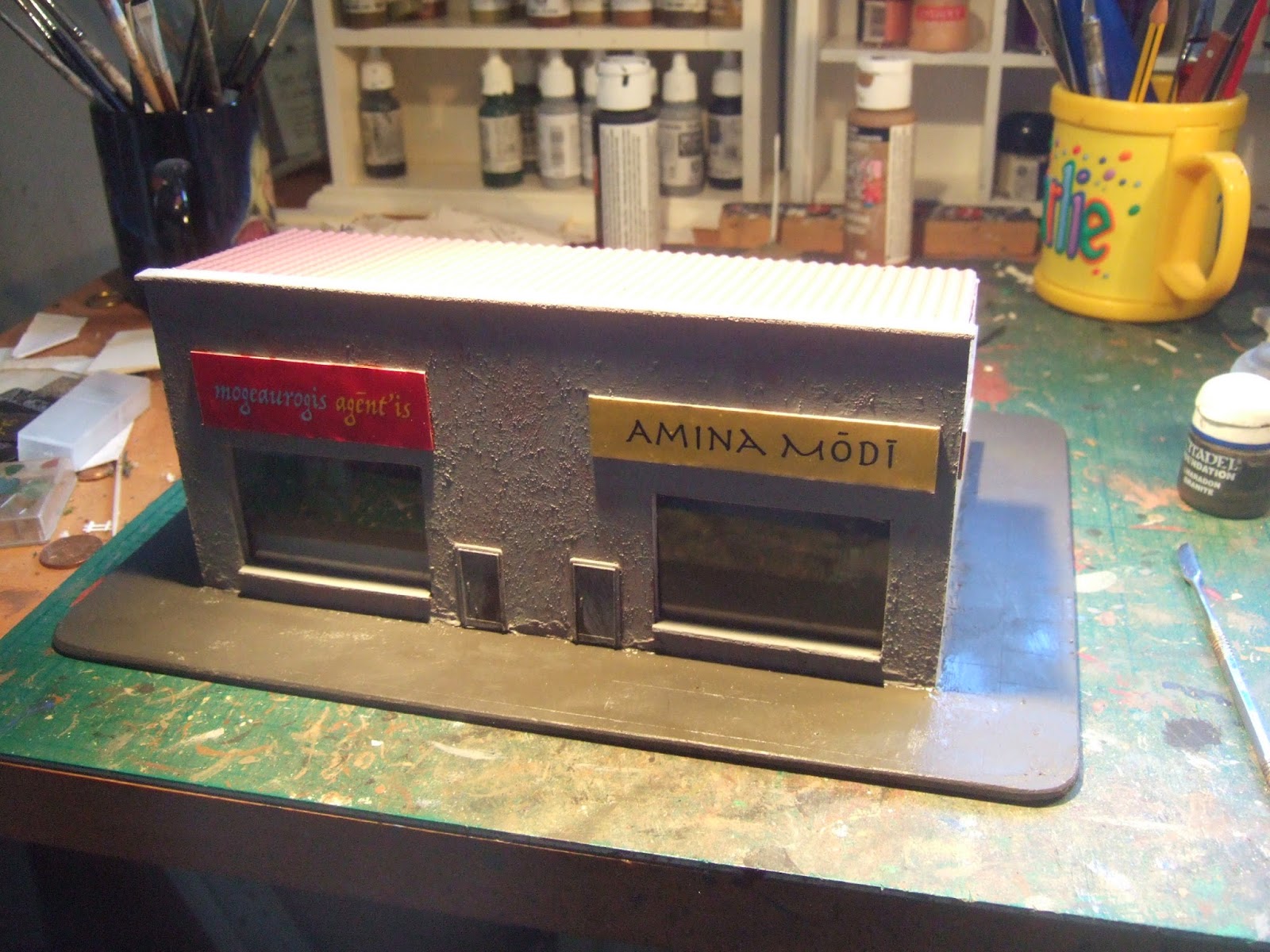 Next, the pavement got an over all dry-brush of a lighter grey than that used on the building. 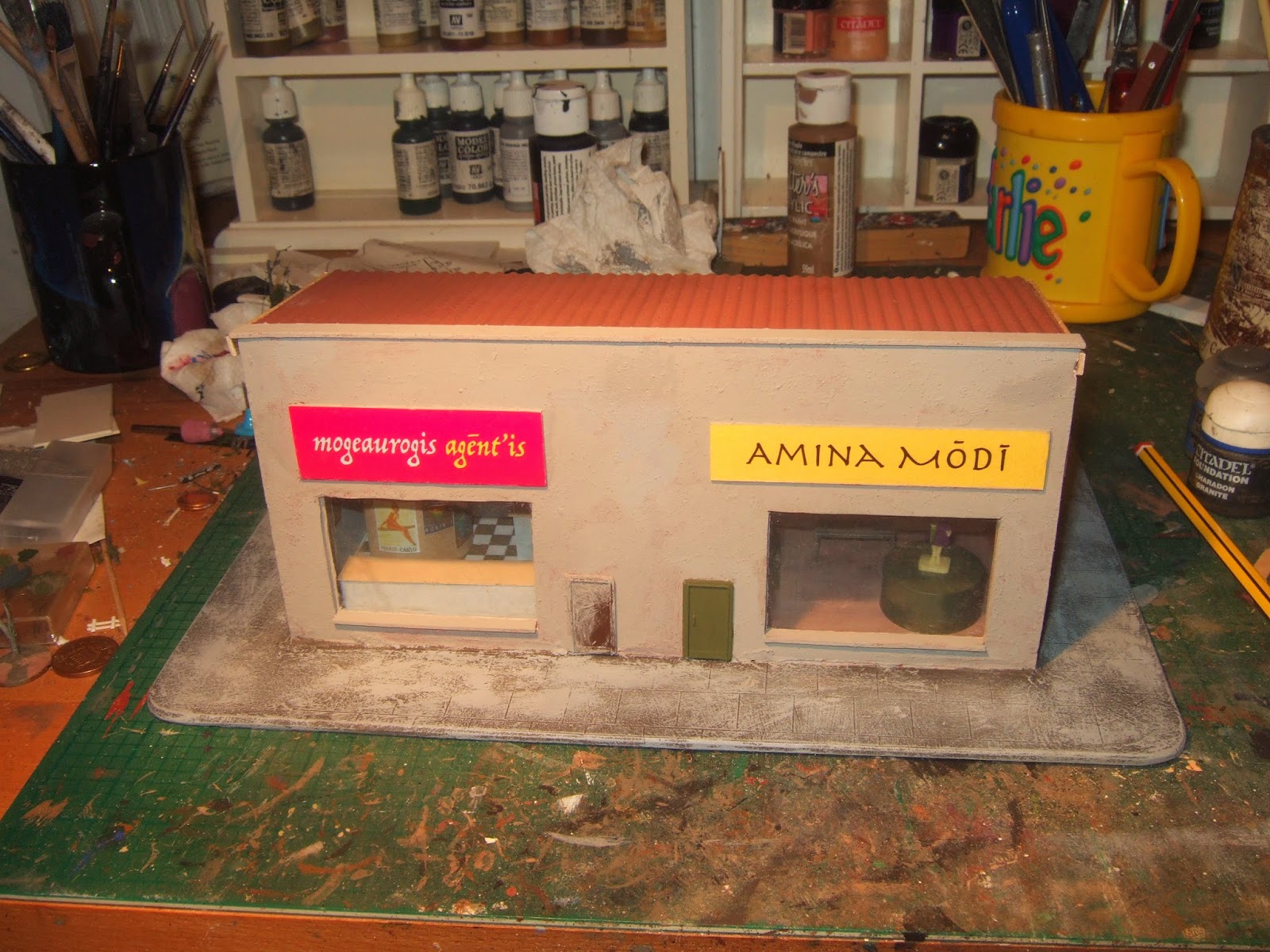 The wording on the signs was achieved using my usual technique of looking up words in an appropriate on-line dictionary.  For Andreivian I use an English-Georgian dictionary and then do my best to transliterate from the Georgian alphabet to the Latin.  I decided long ago that the Andreivians use the Latin script as it saves repainting an awful lot of stuff. 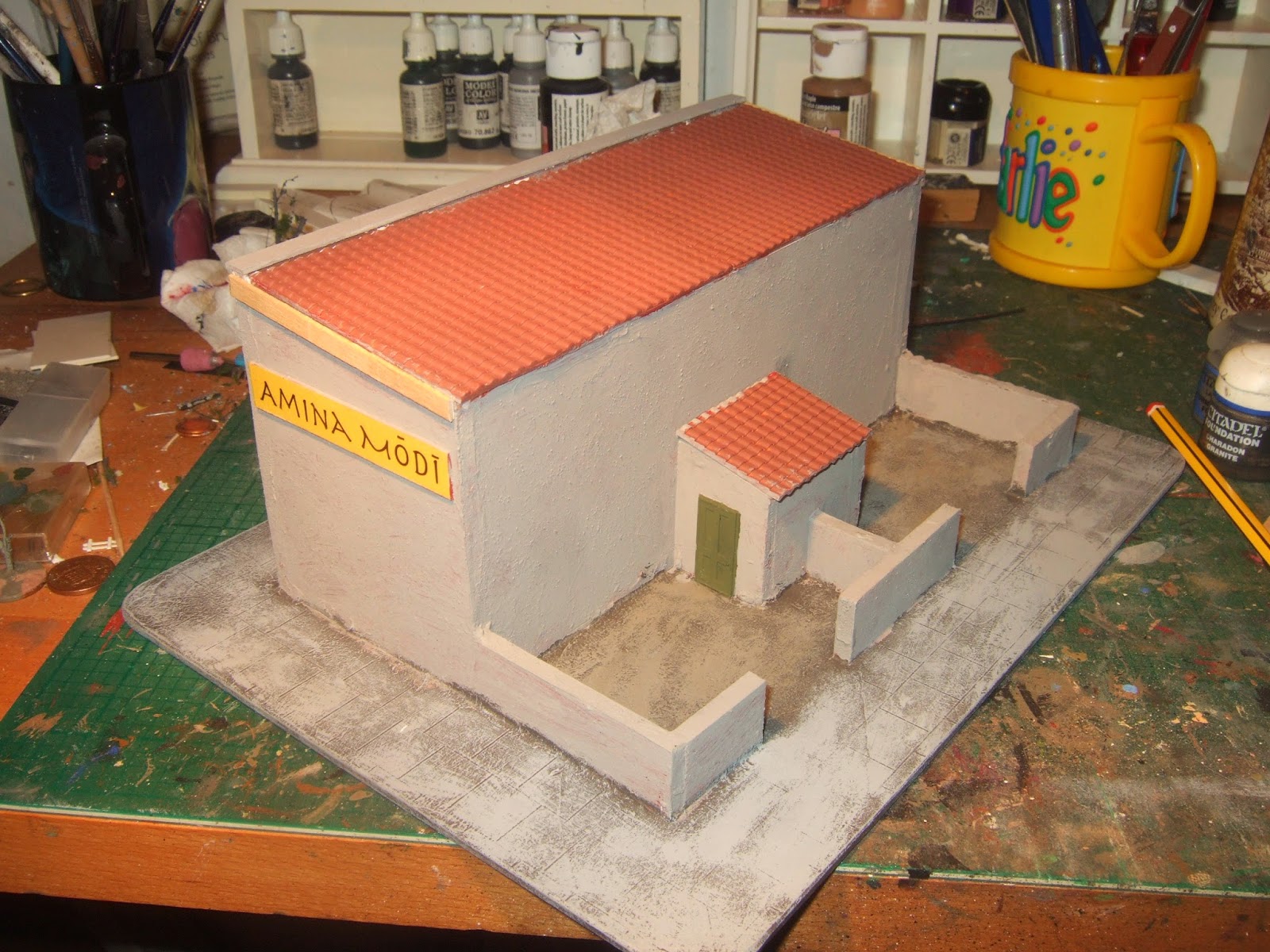 Finally for now, the floors of the rear yards have had a base coat of a dark earth colour.  Also I've given a couple of the doors a first coat of paint and added coffee-stirrer barge boards to the top of the eaves.

Posted by Counterpane at 2:15 PM 4 comments: