Last night Chris came over and we had another go at the Sharp Practice 2 scenario I'm working on for a future Sheffield/Yorkshire Lardy Day.

Since the last time we played the scenario, I've made a few changes, which I won't go through here in detail in case you get to play in a future version.

The table depicted the workers' encampment where the Veracruz-to-Mexico-City railway line is being built.  The liberal guerrillas are planning to burn the camp and steal all the construction tools (the railway workers have already fled) while the French (Turcos and Contra-Guerillas) plan to stop them. 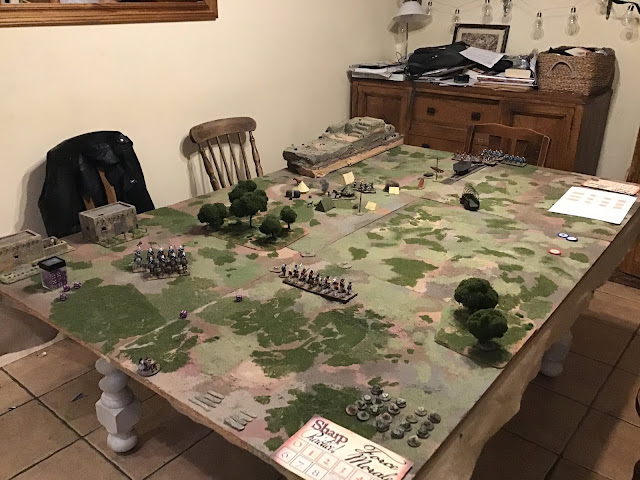 The game began with El Zorro Grande's guerrilla group in the workers' camp and straight away burning one tent and loading the associated tools onto their mule train.

Meanwhile (foreground below) a unit of red-jacketed State militia, loyal to the Liberal cause, were making heavy weather of advancing through the uneven ground of recently cleared undergrowth the threaten the French left... 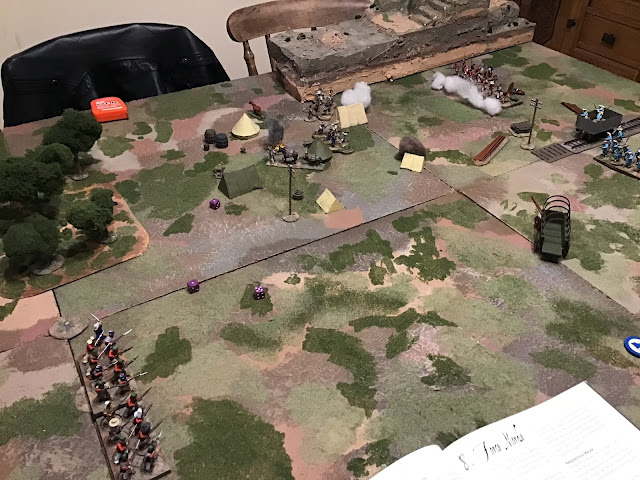 The also red-clad contra-guerillas arrived to the French right and were soon hotly engaged with the guerrilla skirmishers.  Unfortunately their commander, Lt Steinmetz, found himself barged to the ground as his men pushed forward to engage the hated enemy (below). 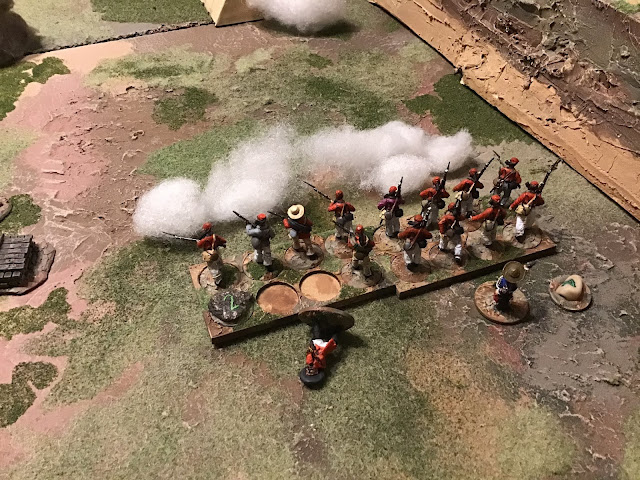 The contras took some serious fire but with admirable discipline they kept up controlled volleys whilst Steinmetz dusted himself down.

On their left, Capitaine Jandou and his Turcos arrived, their skirmisher group under Sergeant ben Hammim sniping at the guerrillas from the cover of a railway truck.... 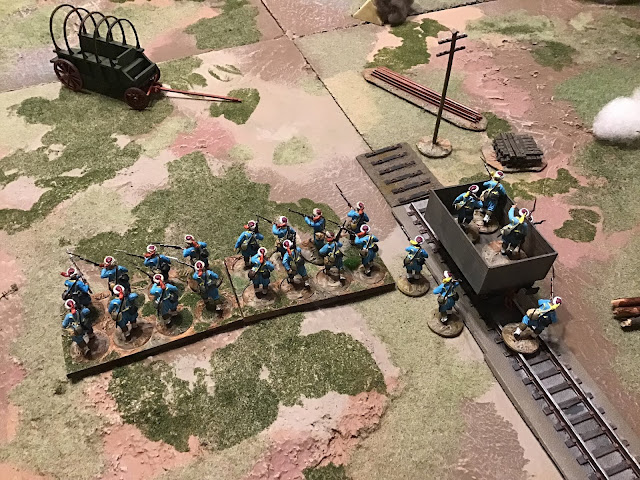 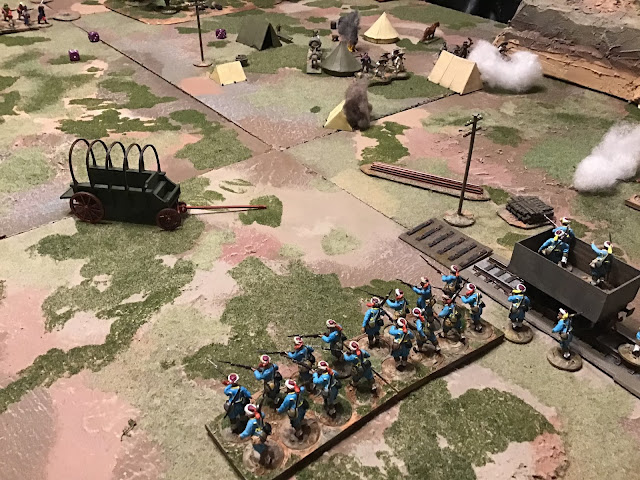 Jandou carefully advanced his men and then wheeled them inwards so they could subject the camp to withering cross-fire. 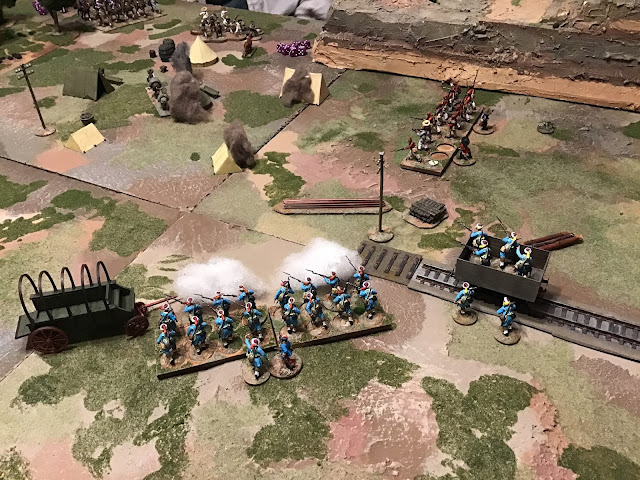 The fire of the two Imperialist formations was too much for the guerrilla skirmishers.  Casualties were mounting when suddenly, with a harsh cry, El Zorro Gordo fell to the ground.  He was mortally wounded!

The guerrillas made for the hills whilst Juan Burro tried his best to get his mule-train away.  With three tents burned and the mules loaded with at least some tools, the Liberals were not far off what they could call a victory.  One more tent and a successful escape would do it!

The arrival of Liberal cavalry hinted at possible victory but casualties were mounting.  Were the horsemen perhaps too late? 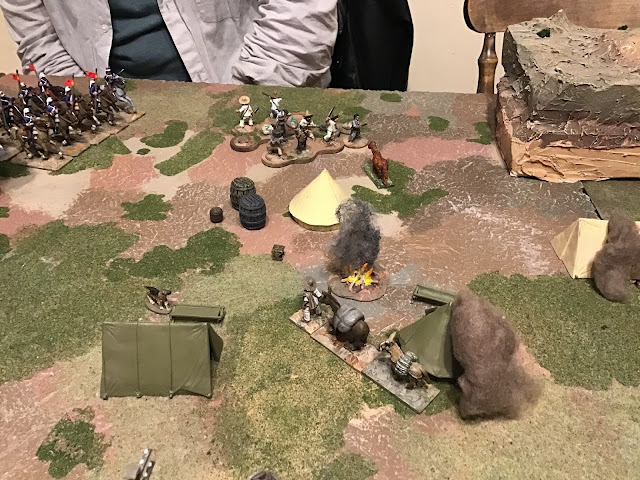 As the mule-train departed, the cavalry tried to ignite the nearest tent but this seemed to be beyond them. Perhaps some house proud navvy had just washed this one and re-erected to dry in the sun?

On the Liberals' right, the State Militia, their old smoothbore muskets wavering before them as they advanced, threatened to outflank the Turcos... 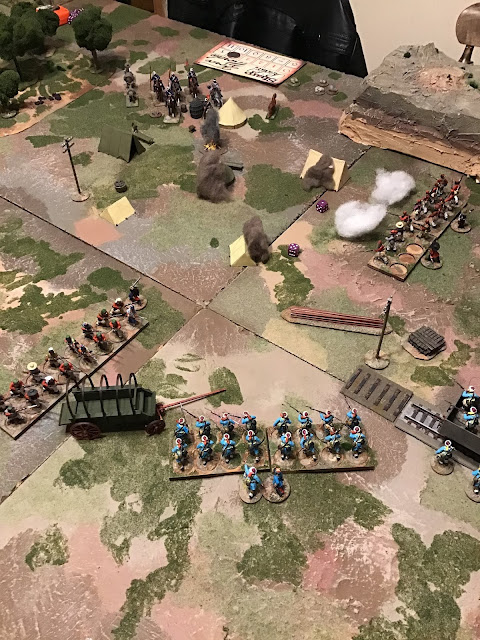 As the Contras advanced on the camp, the Turcos wheeled again and poured a fierce volley into the Liberal militia.  They staggered back under the weight of fire.  Both groups were forced to make an involuntary withdrawal, their formation was broken and the last opponents of Liberal Force Morale were lost.  The militia had not even fired their muskets! 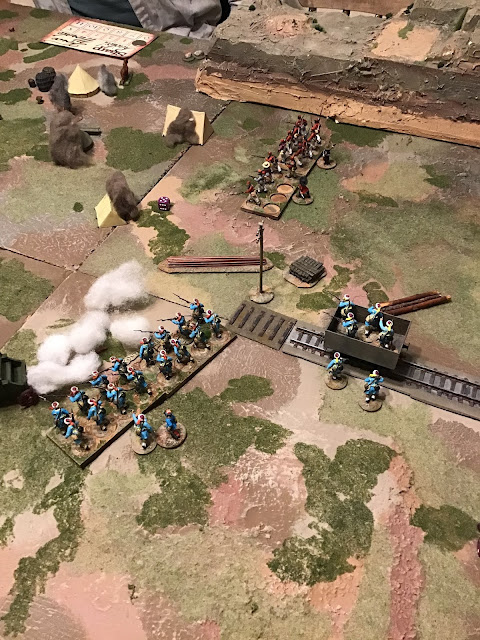 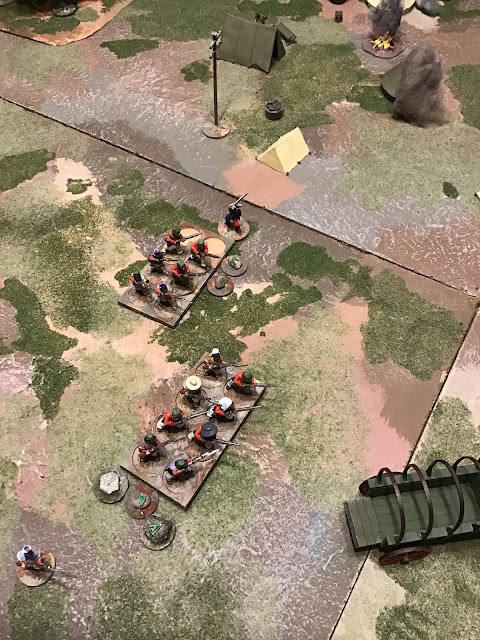 The result was a clear victory for Chris and the Imperialists.  The unlucky loss of El Zorro Gordo was crucial.  Without his presence Jamie had no way to rally off accumulated shock and he lost the ability to move swiftly from tent to tent as he had done in the previous play-test.

I'm considering a few more changes to the scenario.  In particular I'd like to give the Imperialist player some more interesting tactical choices.  More on this when I've cogitated on the matter.

Posted by Counterpane at 1:19 PM 2 comments:

Last weekend I made the trip to Grimsby Wargames Club's excellent premises to play a weekend of Cold War Commander.  In fact, as I had some stuff I wanted to do in Sheffield in the evenings, I ade the trip there and back three times.  And I only got lost once!

The Cold War Commanders events are, for me, mostly about the craic as our Irish friends would have it.  I far prefer CWC as a smaller game that we playing in these big, multi-player events but the guys are a great bunch and it's always great to catch up with them.

Here are some pics.

And that's it!  I mostly took videos this year and I'm going to try and stitch them together into something that can go on Youtube eventually.

Thanks are due to the Grimsby club for organising, to all the guys for a most friendly weekend, and especially to Richard Phillips for his superb organisation and for producing most of the terrain!

It's taken a while but I have now finished those sprue-based trees.  So to recap:

Tree skeleton made from glued and melted lengths of sprue.  Stick to bases; I used plastic card glued to artist's mounting board: 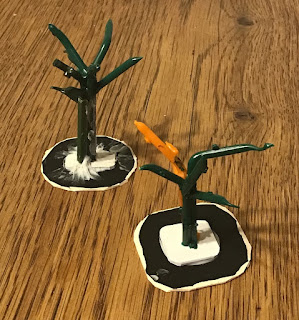 Build up the bark with Green Stuff: 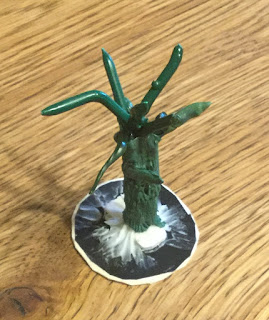 Paint dark grey having 'glooped' the base: 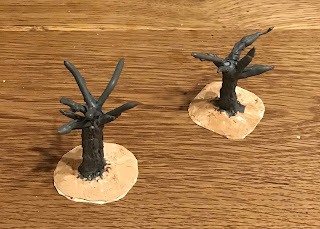 Drybrush lighter grey and paint base: 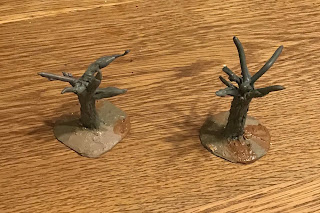 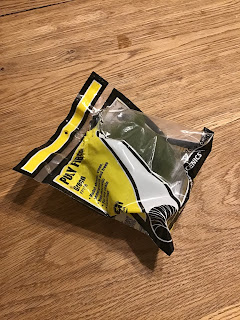 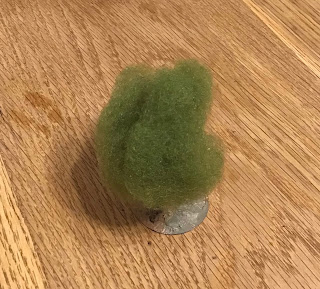 The paint with watered down PVA and dip into Woodland Scenics flock: 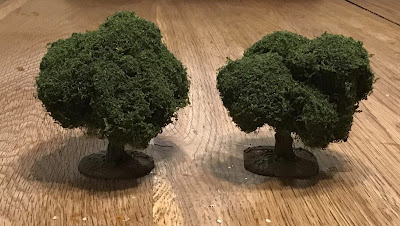 I then sprayed them with hairspray to keep the flock in place.

I think they'll do.

Posted by Counterpane at 2:16 PM 2 comments: