Struggling a bit this week. Two of the kids have gone off to university and are finding it hard to adapt emotionally to the change after months of basically being isolated at home, while the feed back from Crisis Point was best described as "mixed". So a bit of model-making is called for to take my mind off things.

Somewhat surprisingly I'm still working on 28mm Sharp Practice stuff but now it's for the 1812 campaign.

These are Perry plastic Prussian infantry; on the left, some line infantry that will get me up to 24 figures when they are complete.
On the right and below are skirmishers. The Perry set comes with parts to make six men from a volunteer Jaeger company but while these are appropriate for 1813 onwards, I believe they weren't present in Macdonald's X Corps in Livonia.
Instead, skirmishing duties were carried out by the third rank of each battalion so I'm using Green Stuff and spare parts to produce some more active-looking fusiliers to populate a six-figure skirmisher Group.
Interestingly this leaves me with six unused forage caps that would be quite useful if I were making Ellet's Mississippi Marine Corps in this scale but that would be silly...

Posted by Counterpane at 1:59 AM 2 comments: 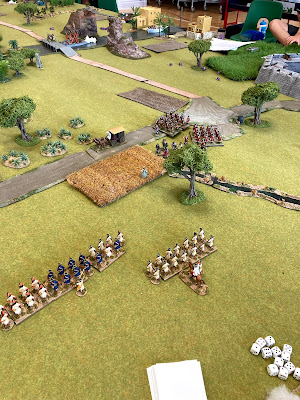 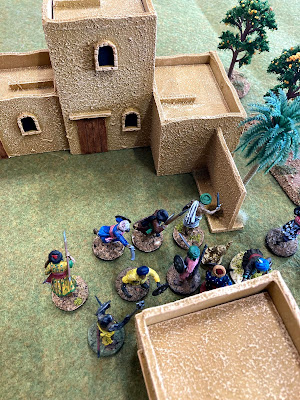 This evening Richard P, Will, Andy and I started setting up the main table for Crisis Point 2021.  I think it's looking pretty good so far.

Posted by Counterpane at 3:05 PM No comments:

No, not another Sharp Practice project!

Many, many years ago friend Tim McAlpine told me about an American Civil War unit he had a hankering to model. Back in those days it would have involved converting Minifigs 25mm models. The unit, he said, was called "Ellet's Mississippi Marine Brigade" and they wore conventional ACW uniforms but with distinctive round-topped caps. For some reason the memory of that brief conversation has stayed with me. I wonder if Tim ever got round to building the unit? 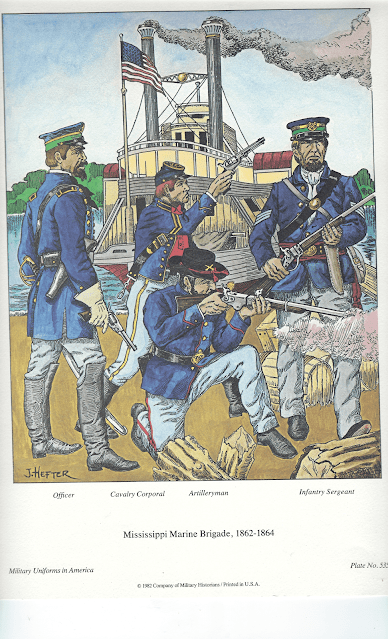 Now, I've never had a great interest in the Civil War but recently watching the Youtube video The American Civil War Oversimplified (and its follow-up) has given me a handle on the broad sweep of the war that puts the bits I did know into some sort of context. Getting into gaming the ACW now seems less daunting somehow.

And then along comes an article on the very Mississippi Marine Brigade that piqued my interest nearly four decades ago!

It turns out that the unit was even more fascinating than I'd imagined. I'm not sure I'd want to organise a Sharp Practice game about marines kidnapping aristocratic Southern belles to use as hostages to engineer for the release of captive New England school ma'ams but there are plenty of ideas there for SP2 games!

It also turns out that Thomas Brandstetter (whose Star of Bravery campaign I've been enjoying of late) has also had this idea and produced SP2 lists for the force.

And yes, I have some as-yet-unused Perry plastic ACW artillery. And no, I don't need another Sharp Practice project!

It's only a couple of weekends away! 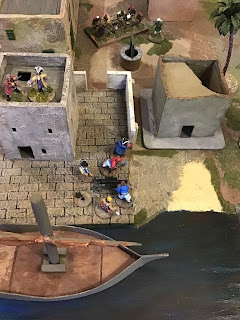 The plan is as follows:

Friday (if you're in the area):

c 1530: arrive at the Hall, collect the keys, remind ourselves of the security systems.

say 1930 onwards: Gather at the Royal for carefully paced consumption of beer

1000 - 1100: finish setting up, allocate remaining players to forces, councils of war - players decided who will attempt to carry out which mission (and with which support choices)

Players will be in one of two roles. Force commanders will be responsible for carrying out orders provided by their faction's non-player leader (e.g. their factor or the king of the Woebetideus). Other players will help to run a Force but will also be responsible for the actions of a non-commander character (NCC). Each NCC has an objective of their own that they will be expected to fulfil whilst also helping their Force to succeed.

1000: gather at the hall revised briefing from umpire if required.

1230: to the Royal for lunch (optional; if anyone would rather stay at the hall they can)

Really looking forward to seeing you there. If you're not currently signed up, please don't hesitate to contact me; we can still accommodate more players!

Posted by Counterpane at 5:10 AM 2 comments:

I previously reported finishing one Arab rocketeer and said that I wasn't sure I could be bothered converting any more from the fantasy-ninja-type base model.  In the end I did three more before I'd had enough and then decided to bulk out the unit with a homemade brazier to give the rocketeers a source of fire from which to light their fuses. 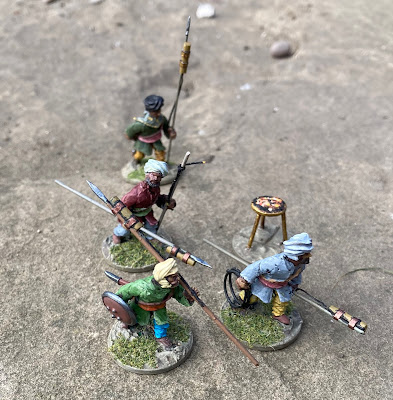 They are all converted from the same base figure but with different plastic heads transplanted on and with the arms moved slightly I think they look sufficiently distinct. 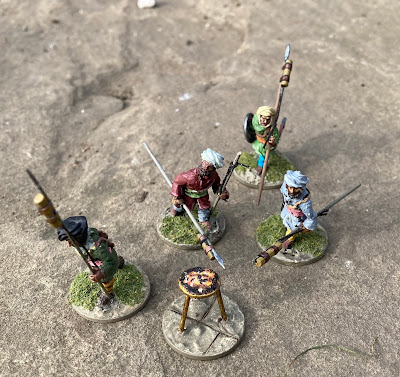 The brazier is made from three lengths of plastic rod and an inverted shield from the Atlantic set. The coals are superglue and sodium bicarbonate.

I'd also decided that I needed a vehicle for one of the European ladies to travel in. I wasn't entirely happy with any of the models available in 28mm so I decided to have a go at giving my existing Roman raeda a suitably oriental look. 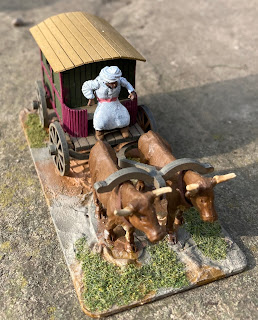 The driver isn't wonderful - he's mostly Milliput and Green Stuff with a spare head and arms from the Atlantic Wargames Afghans set. He'll do though.

Posted by Counterpane at 4:47 AM 2 comments: