Swedes on the Wing

I've always liked the Saab JA-37 Viggen.  We were away on a family holiday in North Wales when I was  about nine years old and my parents bought me the latest Observer's Book of Aircraft: 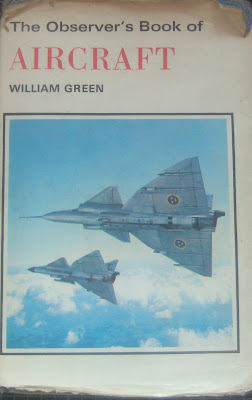 And now I have some Viggens of my very own!  Richard Phillips has kindly sent me some spare models; two Viggens, two Drakens, and half a dozen Pbv302s. 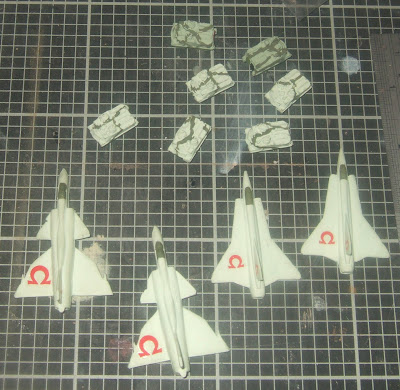 One of the Drakens will be painted up in Ilmavoimat (Finnish Air Force) colours and the others will support my developing Swedish armoured brigade: 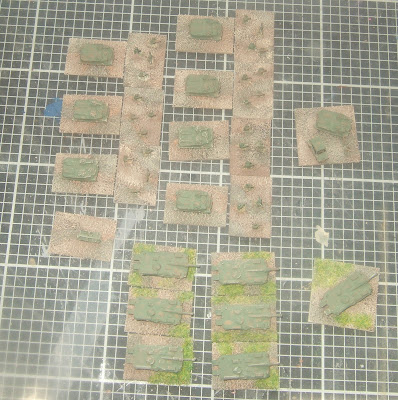 Jamie and I had a very enjoyable, if tiring, day at Triples on Sunday helping Phil Gray run the SOTCW/Old Glory participation game. 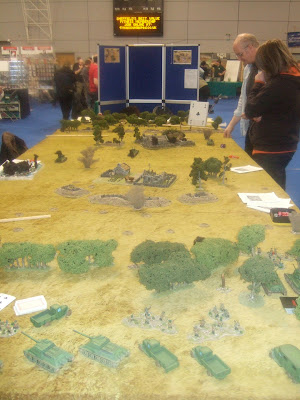 The game used Old Glory's 28mm infantry and tanks to portray a Soviet counterattack against the northern flank of the stalled Kursk offensive in 1943.  It was, I think, the first time I'd played the Great Patriotic War in "Duplo scale" and I have to say a 28mm T-34 is a satisfyingly chunky toy to move around.

I didn't get as much time to look around as I'd have liked but did see some interesting other games.

Posted by Counterpane at 2:08 PM No comments: 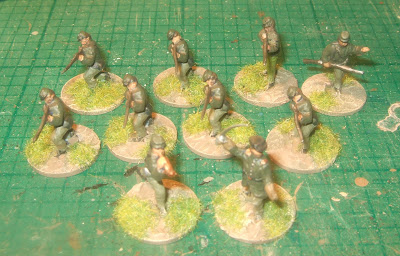 Once again most of these were painted years ago and have just now been touched up, matt varnished and based to my current standard.The standing firing figure, back right, was added today to get the unit up to eight riflemen, hence the slightly different shade of green trousers. 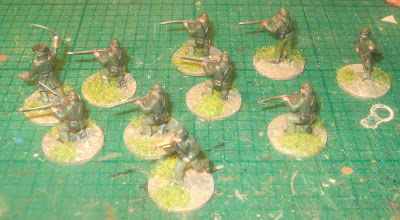 More Airfix conversions this time.  French Foreign Legion, lightly converted and painted as 5th New York Zouaves.  Probably suit someone who does Sharp Practice-style skirmish games in an ACW setting.  Did Too Fat Lardies ever get round to doing an ACW variant?

I originally painted these guys years ago after reading an article on Airfix conversions for the ACW in an old issue of Airfix Magazine.  They've had a bit of a tidy up, some detail added and a dip-style coating with my patented stained matt varnish. 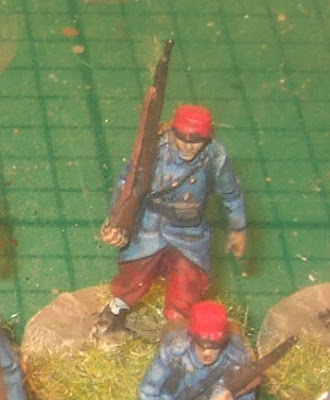 Posted by Counterpane at 2:20 PM No comments:

Clearing Out - part one

Having spent last weekend clearing out tools from my late father's shed, I'm now in a mood to clear my own decks.  I'm building up a box of stuff that'll go on the bring and buy at Gauntlet (if they don't go sooner).

First up are these Serbian Hussars converted from Airfix US 7th Cavalry: 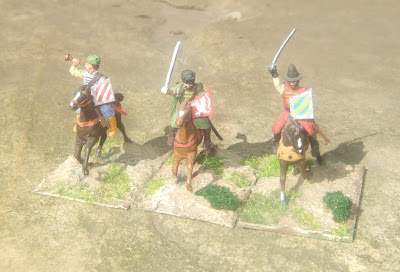 I'm quite pleased with them but I have to accept that I'm never going to use them.

On the workbench - miscellaneous

After weeks of planning and painting in 6mm scale I've done some larger scale models for a change.

These Comets are the first of a troop of three I fancied building.  I had an old model I built years ago but put the wrong markings on (the Guards Armoured Division didn't have Comets during WW2).  I also had a very badly constructed one given to me by a friend.  I bought a third recently to make up the troop.

That's the new (Revell-branded) model on the left and the repaint (Matchbox-branded but it's the same kit) on the right.  The resurrection job is still to be completed.

Next we have some speed painted plastic Napoleonics.  French fusiliers from Esci.  I'm experimenting with variations on the three colour and dip techniques at present. 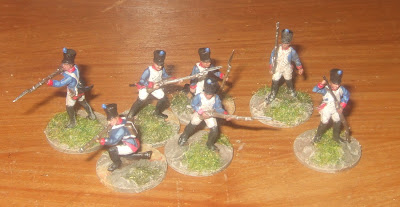 And finally, knocked up in a couple of half-hour slots I had available, three 'blinds' for Sharp Practice.  These are markers that stand in for units that haven't been spotted.  They're a bit on the small side but I made them to make use of some off-cuts of basing card I happened to have lying around.

Posted by Counterpane at 2:06 PM 2 comments:


Posted by Counterpane at 12:00 PM No comments: