When I saw that Rapier Miniatures were attending Joy of Six I resolved to buy a pack from their 6mm Classical Ancients range to see how they compare with Baccus.

I ended up getting a pack of Parthian Cataphracts - £1.25 for ten figures including a commander with a mace, a horn player, and a standard bearer with a draco.  I figured this set wouldn't look out of place    alongside my Late Romans and their contemporaries.

Rapidly (two evenings) painted and based they look like this: 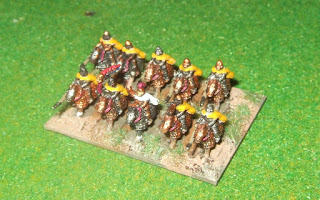 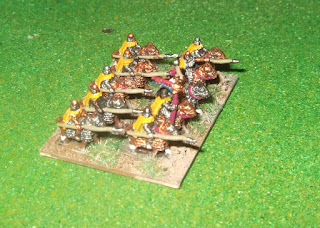 The detail is perfectly adequate and these are nicely proportioned figures.  Most noticeably they don't suffer from the cartoony oversized heads that can be seen on Baccus and especially Adler miniatures.

Directly compared with Baccus (in this case my Late Roman heavy cavalry unit) the difference of style is noticeable but I think I can live with it. 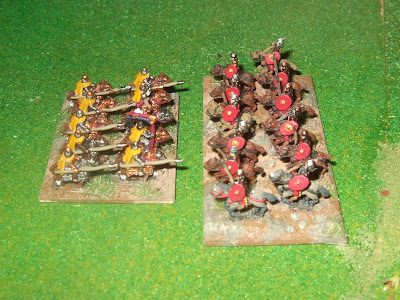 The final point is that the Rapier packs are clearly intended with smaller base sizes in mind.  A game at Joy of Six used their figures on 40mm wide bases and that's what I've chosen to do here.  I'm adopting 40mm x 30mm as my standard base size for Small units in To The Strongest!  See below for small and standard sized units in my scheme.

Posted by Counterpane at 2:35 PM No comments:

We had a great time at the Joy of Six show on Sunday.  It was the first time the Cold War Commanders have put on a game at a convention and we were very pleased to win the vote for friendliest game.  More surprising was to come second in the vote for Best Game; there were some fabulous looking games about.

Here is the the Battle of Bjerkvik crew: 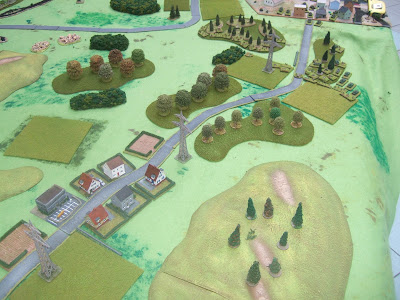 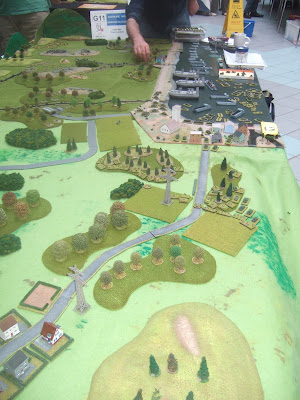 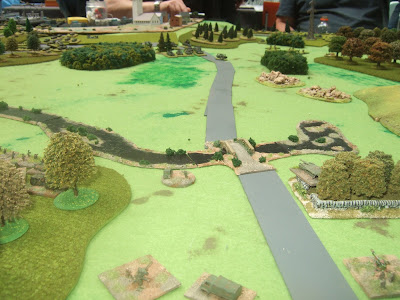 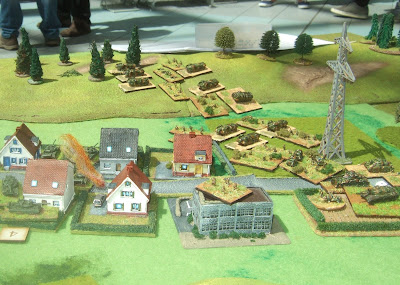 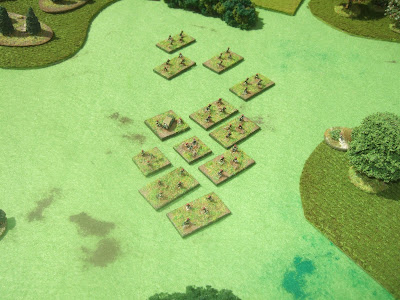 I didn't take many pictures as I was too busy talking to visitors but here are some photos of just a couple of the other games.  First up Nashville 1864 by the Legion of Blokes... 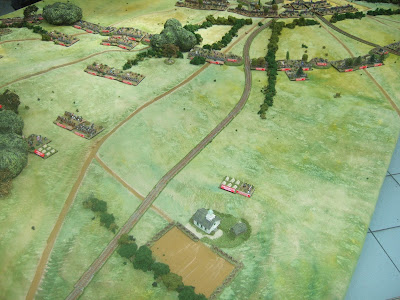 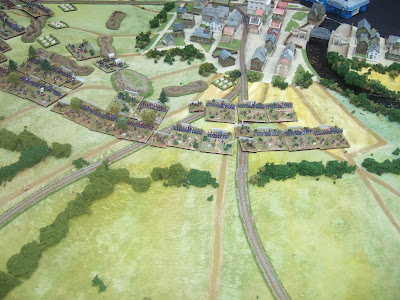 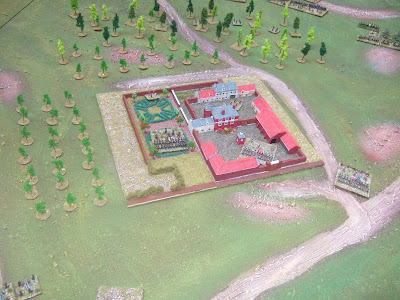 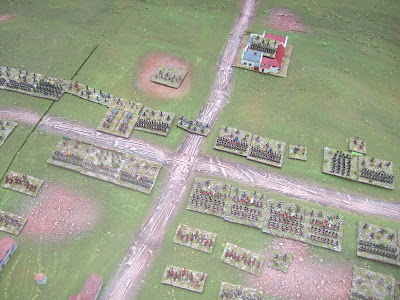 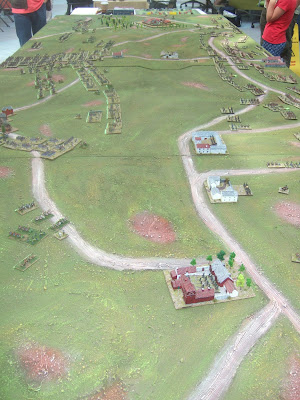 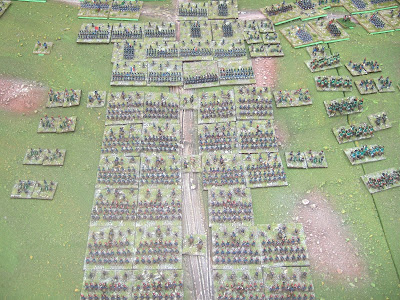 ... and finally Gadebuch 1712 by the always charming Per Broden. 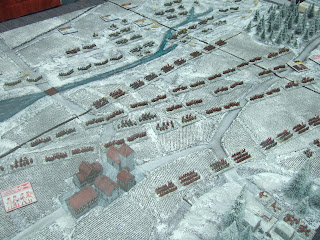 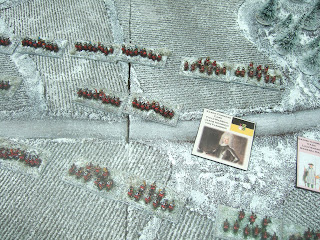 I was reasonably restrained when it came to shopping; I'm still trying to keep my lead pile under control.  I bought a pack of Parthian Cataphracts from Rapier Miniatures, some heavy Late Roman Cavalry and generals from Baccus and some PaK 40s and shipping containers from Heroics and Ros. It was good to see the last of these here as it's otherwise necessary to buy all your micro armour by mail order.  Oh and Jamie bought a copy of Ronin. 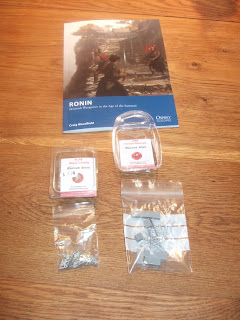 The first element to be completed was this small square of camp designed to fit within a To The Strongest! square and still leave room to deploy some light infantry to defend the camp. 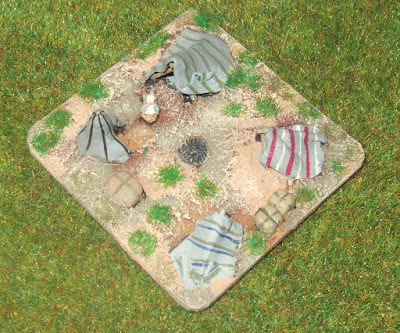 Next up we see the whole camp set up to cover three TTS! boxes. 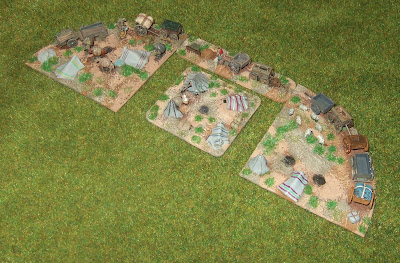 And finally the alternative two-box set up. 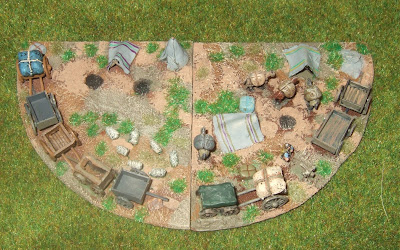 The wagons are a mix of converted Irregular Miniatures Hussite war wagons, Baccus Tumbrils and scratch builds.  The tents are all home made from plastic rod and Green Stuff.

The remnants of a pack of Baccus Late Roman lanciarii were looking at me funny.  "Use us" they were saying, but I didn't really need more light infantry.

Now, I know they work quite adequately as close order Auxilia but I didn't have enough for a whole unit as I've previously based them. 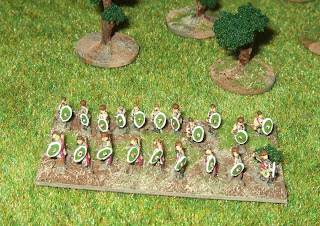 The solution I came up with was to add a little diorama element in the form of a muleteer quickly taking the unit's supplies to the rear: 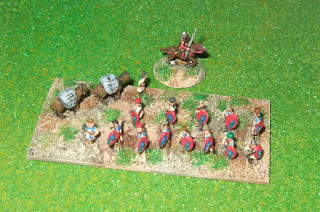 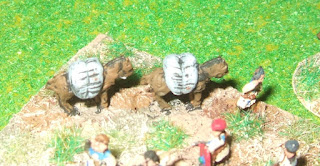 All of the figures are from Baccus. The muleteer is from the Tumbrils pack.  The mules themselves are converted from Napoleonic artillery limber horses kindly donated by Geoff Taylor.  The Batavi Seniores, for such they are, are reinforced by a couple of converted figures from the Viking- and Saxon Personalities packs.  The passing horseman is a new "hero" to reinforce my equites alares.

Also completed recently is an additional general element for use with pretty much any Germanic barbarian army. 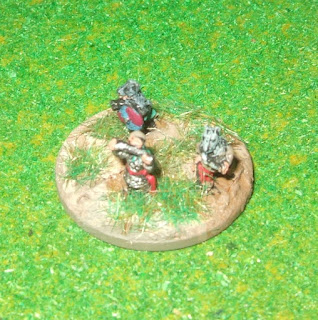 He's from the Viking Personalities pack and is accompanied by a couple of wolfskin-clad ulfhednar.  Now the latter are obviously Viking but I've recently been reading Bernard Cornwell's The Winter King and I'm inspired to use these guys with non-Norse armies too.  Who's to say that similar ritual practices didn't occur in other Dark Ages cultures?

Finally, I've completed another pancerny unit for my early 18th century Polish-Lithuanian army.  Only two more to do and then I can start on the Swedes! 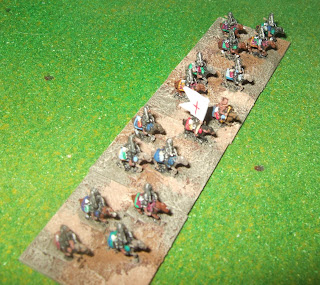 Posted by Counterpane at 1:40 AM 5 comments: