After my visit to Triples this year I became obsessed with the possibilities offered by 6mm scale units as dioramas.  Another one has just left the workbench.  It's a generic 16th century command element (or perhaps just a terrain piece). 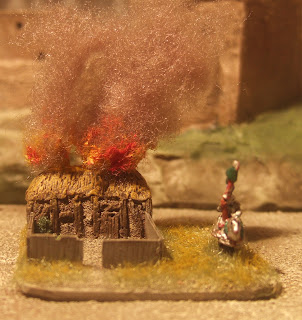 The man at arms is an Irregular Miniatures commander.  The cottage is cast in plaster by Baccus 6mm (part of a set I bought years ago).  The fence is scribed plastic card and the flames and smoke are a mixture of Green Stuff and hamster bedding!  The vegetation is a mixture of various terrain materials and paint effects. 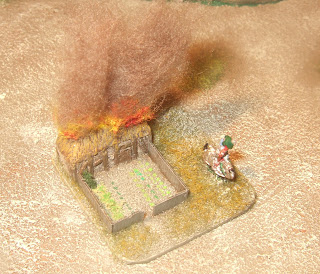 For those of you not familiar with 1/300th scale, the base is 40mm square.  Click on the pics to see more detail.
Posted by Counterpane at 2:43 PM No comments:

As I've said before, the Wolf Pirates of Glorantha are both my intended army for this year's Berkeley HOTT tournament and my Project for The Guild's group build this year.
The latest batch include (left to right) a Vormaini exile, a pair of Char Un Cossacks, and a Kralorelan Tiger Son.

There's also a pair of Trolls!  The Dark Troll wields an impressive lead mace while the Trollkin is unusually well-equipped for his caste.  He's obviously a "value" whose skills save him from the cooking pot. 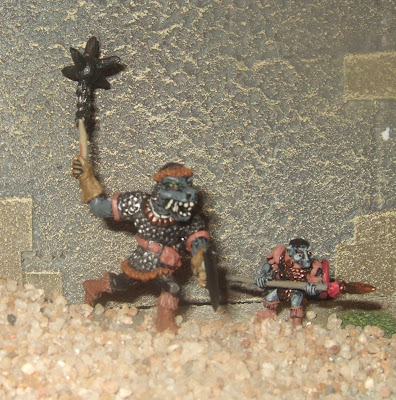 Finally a close-up on that Tiger Son... 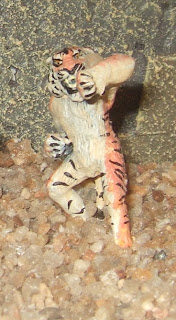 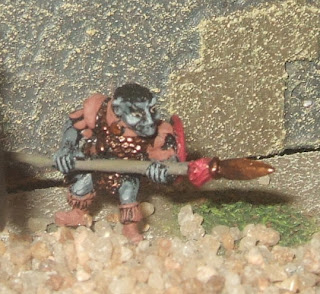 Posted by Counterpane at 2:43 PM No comments:

Some More from the Royal

Tom Zunder has provided me with some more pictures of Saturday's events and as his photographic skills far outstrip mine, I thought I should share them with you.
Below we see Matthew Richards's barbarian types facing off against my Asag and the Stone Allies under Tom's generalship. 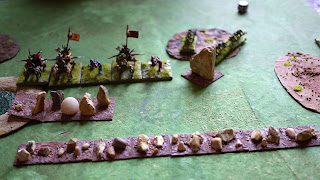 I was please by how well me son Jamie did (he finished ahead of me for the first time).  He used his Army of Cornetto - an early renaissance Italian army with added Leonardo Da Vinci extras.  Here we see his two units of Knights. 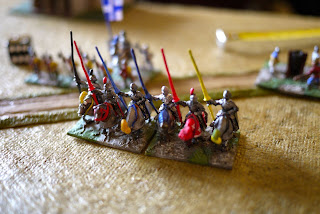 Matt Zunder used my Northern Union army - a force made up of Rugby League mascots.  Here it seems that Huddersfield the Giant has just recoiled from some archers leaving St Helen's flank exposed. 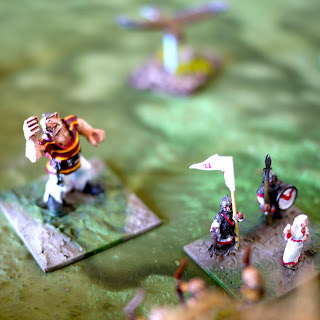 Finally, Lizardmen (Tim Chadburn's I think) against Samurai.  The Samurai are from my Heroes of the Minamoto army which Richard Sangar used to good effect. 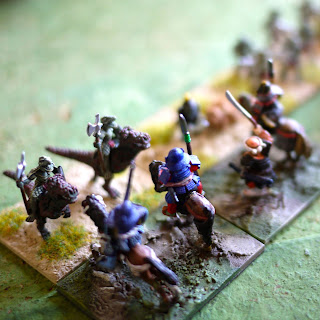 Posted by Counterpane at 11:23 PM No comments:

A Fistful of Richards 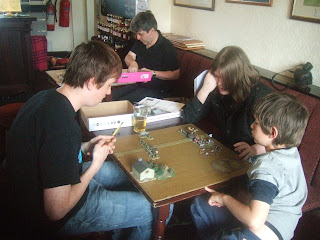 Thirteen players from across the northern half of Great Britain gathered in Sheffield today to contest the third Hordes of the Things Royal Tournament.  Five of them were called Richard or Richards.
The selection of armies on view included the US 7th Cavalry, Battlestar Galactica, two Welsh armies separated by about six centuries of time, and Renaissance Italian.
Here Andy Sangar (l, The Northern Union) meets Gus Woodward (r, Battlestar Galactica) whilst eventual winner Eddy Richards looks on. 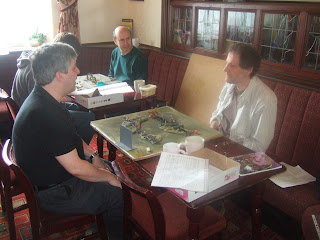 Tom Zunder (Asag and the Stone Allies) took on Matthew, the younger of the Richards lads, in round 1. 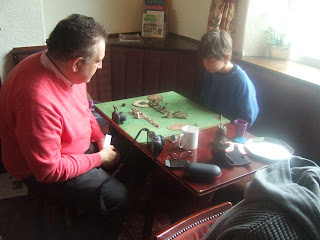 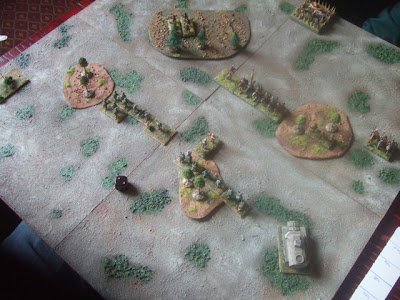 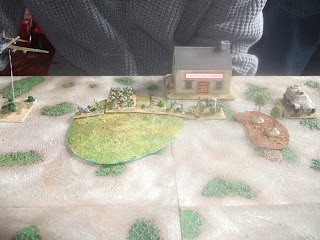 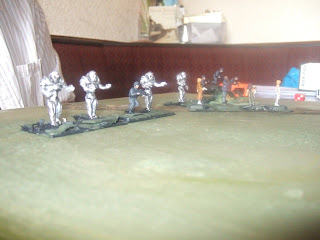 Magically transported to the ice fields of Hoth, the Army of William the Bastard (under the skilled direction of Eddy Richards) had no problem defeating the Rebels.  In this case the Millennium Falcon had not escaped by the time William himself captured the Rebel base. 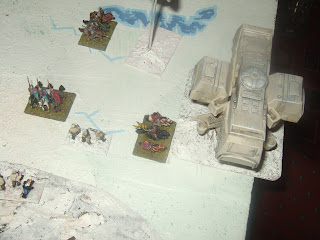 This next pic shows the star game of the day, though.  Matt Zunder (left) using my Don't Cry For Me Aberystwyth army was up against his dad using Asag and the Stone Allies (also mine).  Just after this shot was taken Matt's General Llanbadarn and Gwenno Guevara (Hero) killed Asag whilst the armoured car (Rider) and Lancaster bomber (Airboat) captured Asag's mountain stronghold.  In twenty years of playing HOTT that's the first time I've seen someone win a battle by all three of the possible routes (general killed, stronghold captured  and half the army lost).  Well done Matt! 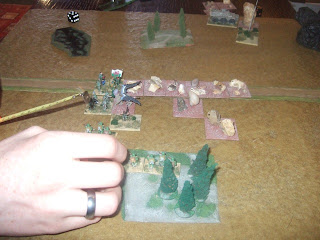 Posted by Counterpane at 10:28 AM No comments:

The Royal This Weekend! 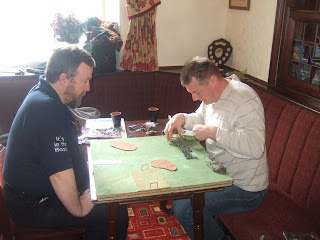 Having organised the event somewhat at the last minute when a few people suddenly asked if it was on and Dave the landlord noted that we hadn't done one for a while, I'm really pleased that we look like having a healthy turn-out.  I'm hoping a dozen or so keen veteran and neophyte HOTT players will enjoy four games each over the day.

If you're in the Sheffield area why not come along to the Royal in Dungworth and have a look?
Posted by Counterpane at 11:37 PM No comments:

Andy and Richard Sangar came over this afternoon and Jamie and I played them at Hordes of the Things.  Richard is borrowing my Heroes of the Minamoto army and Andy is braving the complexities of The Northern Union.


Here we see Richard's force lined up against my Star Wars rebel army.  This game ground to a halt after an hour and a half as Richard sensibly didn't come into the bad going to fight my rebel Shooters and I couldn't roll enough PIPs to do anything useful with my Airboats. 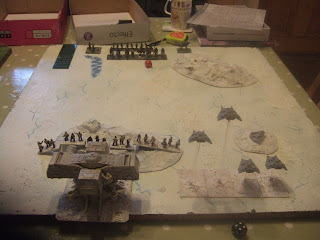 Andy and Jamie's game was more exciting, though.  Jamie, commanding his own Army of Cornetto (Leonardo da Vinci semi-historical Italians) learned early on not to send Blades into bad going against Warband.  Andy learned not to send Beasts in good going up against knights and also the importance of not allowing your Behemoth to be hit in flank.  St Helen was horribly squashed by Huddersfield the Giant as he recoiled from an attack by Leonardo's turtle car. 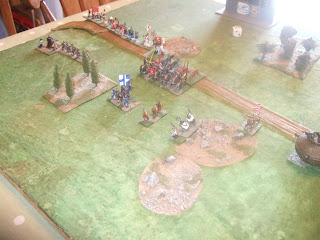 Posted by Counterpane at 10:44 AM No comments:

The Royal Tournament of HOTT

I'm stuck in a tiny hotel room in London this evening so I thought I'd take the opportunity offered by free broadband to post a reminder that Saturday 25th June sees the Hordes of the things Royal Tournament. 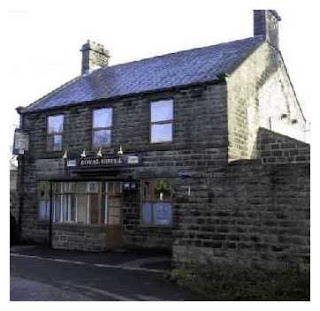 The event takes place at the Royal Hotel in the lovely South Yorkshire village of Dungworth.  It starts at 1030 and ends about 1700.  Participants are guaranteed four one-hour games of HOTT and the use of the Swiss chess system ensures that players will mostly be paired with opponents of similar experience and ability.

Armies are the standard 24AP in strength and should be in 15mm scale (or at least on 15mm style bases).  If you would like to take part but don't have an army, there will be plenty available to borrow on the day.

Oh, and the pub is in the Good Beer Guide and Dave's home made pies are excellent!
Posted by Counterpane at 10:38 AM No comments:

On the workbench: More Wolf Pirates

And so we come to possibly the last photos from my trusty Fujifilm Finepix F11.  Alas, the plucky fellow has been dropped on the tiled kitchen floor one time too many and now has a knackered lens cover mechanism.  Looks like a trip to Jessops is called for.
Anyway, more Wolf Pirates in production.  The first two are conversions of Pan Tangian pirates from the old Games Workshop Eternal Champion range.  I've removed the oversized weapons and will be replacing them with brass wire spears (or are they boarding pikes?) 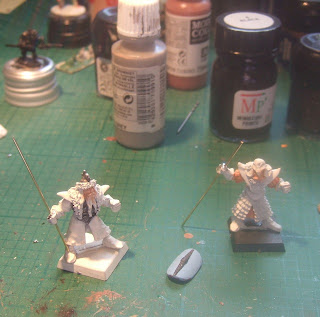 It occurs to me that may have just ruined some valuable out-of-production miniatures!

Also to join the Wolf Pirate armies are these - a Trollkin, another Vormaini, another ex-Gladiator, and a woman from the mysterious southern continent of Pamaltela. 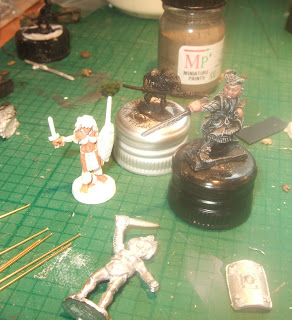 Posted by Counterpane at 12:28 AM No comments:

So that's my army for the HotT Royal Tournament sorted. I've dusted off (literally) and repaired the old Star Wars Rebel Army that I used in the second Berkeley HotT competition back in 2001.
Unusually for a HotT army it contains four Airboats. I don't think many HotT players come across these regularly and certainly not in this quantity. This has probably contributed to the army's past success (I finished in the top ten at Berkeley with it). 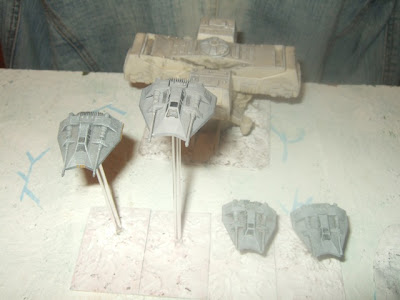 The rest of the army consists of six units of Shooters including the General (front and centre in the shots below). This'll be the first time I've used the army since the adoption of the Glory Day amendments which slow down Shooters to 200 paces a turn. 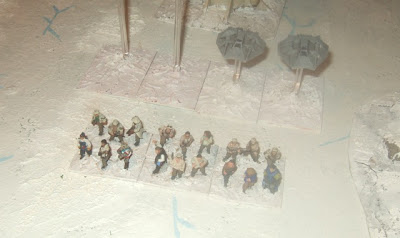 The Stronghold is a Star Wars plastic toy I found at the local flea market. Not sure what it's meant to represent but it gets the job done. 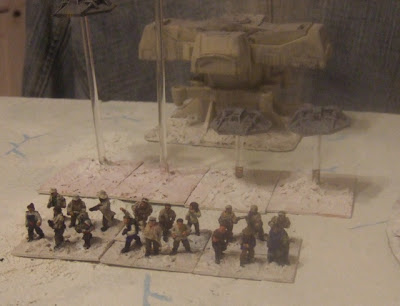 On previous occasions I've used it with the matching Imperial army which has tended to suffer against it. AT-AT Behemoths are too easily stopped by the Airboats and Stormtrooper Blades that enter bad going are meat and drink to snow speeders. 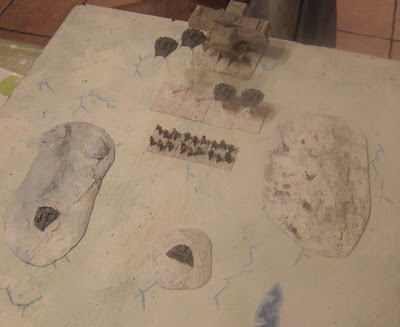 Posted by Counterpane at 1:16 PM No comments:

I've decided to resurrect my 15mm Star Wars Rebel army to use at the HotT Royal Tournament later this month. As a sneak preview here's an area of bad going I've constructed to go with the army. 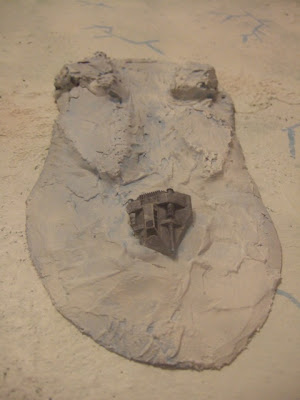 It's a simple piece, put together over the last couple of evenings. The base is hardboard cut to shape with a jigsaw and with the edges chamfered with a combination of Stanley knife and sand paper. The ice blocks are broken polystyrene packaging and the surface texture is my usual tile grout. 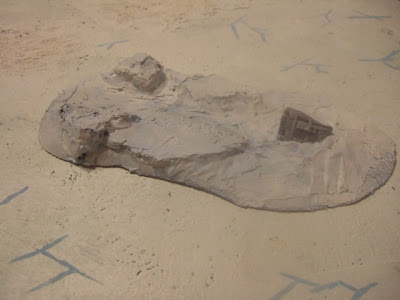 The snow speeder is a plastic toy (source unknown). 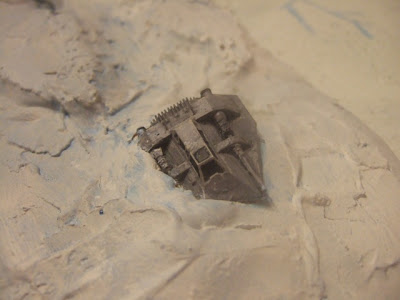 The snow and ice get a coat of pale blue acrylic and then a heavy "damp brush" with white and Darth's your uncle (well, nearly).
Posted by Counterpane at 2:00 PM No comments: